Although the mortality rate of endometrial cancer is comparatively low in gynecologic malignancies, a rising trend of this cancer has been observed for the past decade. The understanding of the molecular mechanism will favor for the clinical management of this disease. Aberrant activation of Wnt/β-catenin signaling pathway plays a major role in the pathogenesis of endometrioid adenocarcinoma including this cancer type. In this study, we reported that Sox7, one of Sox transcriptional factors, was frequently underexpressed in endometrial cancer and importantly, it was associated with dysregulation of the Wnt/β-catenin signaling activity. Immunohistochemical and quantitative RT-PCR analyses showed that Sox7 was underexpressed and was associated with high-grade tumor (P=0.021), increased expressions of β-catenin (P=0.038) and its downstream targets; CyclinD1 (P<0.001) and FGF9 (P<0.001). In addition, using HEK293T cell model, we found that Sox7 was able to inhibit TCF/LEF-1-dependent luciferase activity induced by Wnt-1. This was further proved by that Sox7 could significantly suppress the expressions of Wnt targets; Cyclin D1 and C-myc in endometrial cells. Immuno-fluorescent microscopy revealed that Sox7 was co-localizaed with either mutant β-catenin or TCF4 protein in nucleus, while co-immunopreciptation assay demonstrated that Sox7 could physically interact with not only wild-type but also mutant β-catenin, as well as TCF4 proteins. Functionally, enforced expression of Sox7 could significantly inhibit endometrial or endometrioid ovarian cancer cells (OEA) harboring either wild-type or mutant β-catenin. These data suggest Sox7 is a negative regulator of Wnt/β-catenin signaling pathway through impeding the transcriptional machinery of β-catenin/TCF/LEF-1 transcriptional complex, and the loss of expression may be involved in the pathogenesis of endometrial cancer.

Wnt/β-catenin or canonical Wnt signal transduction pathway is a conserved molecular mechanism in metazoan animals. This signaling pathway regulates a remarkable variety of cellular process such as cell fate, cell proliferation, cell survival, cell behavior and migration [2]. In this pathway, β-catenin is the most effector for the regulation of Wnt/β-catenin targets. The stability of β-catenin is regulated by a multiprotein complex such as glycogen synthase kinase-3β (GSK3β) and casein kinase 1 (CK1), and the scaffolding proteins adenomatous polyposis coli (APC), Axin1 and Axin2 (conductin). Aberrant activation of this pathway due to the accumulation of β-catenin is commonly found in human cancers [3-6]. Mounting evidences have revealed that the oncogenic mutations in β-catenin, APC and Axins are often associated with the upregulation of β-catenin and the pathogenesis of endometrioid-type of endometrial cancer and ovarian cancer [7-10]. The accumulated β-catenin eventually translocates into nucleus promotes tumor progression through its persistent interaction with one or more of its numerous downstream targets such as TCF/LEF factor. Therefore, promoting β-catenin degradation by targeting the upstream sites of Wnt/β-catenin pathway is a rational approach for the therapy of cancers [11, 12]. However, most of human cancers including endometrial cancer (38%) harbor mutations on serine/threonine residues (codons 33, 37, 41, and 45) of β-catenin [13-15]. This causes difficulties of using above ways to inhibit the aberrant activation of Wnt/β-catenin signaling pathway in this disease.

For immunohistochemical analysis, a commercial ovarian cancer tissue array (EMC1501, Pantomics Inc, San Francisco, CA) was immunostained with primary rabbit polyclonal anti-Sox7 (R&D Systems, Minneapolis, MN USA) in 1:250 dilution, anti-β-catenin (BD Biosciences, St Jose, CA, USA) in 1:400 dilution, and anti-FGF9 (Santa Cruz) in 1:200 dilution. The immunoreactivity of immuno-positive sample was determined by multiplying the intensity of the staining (+1, faint, +2 moderate, +3 strong and +4 very strong) and percentage of stained area (0-100%). The mean of immunoreactivity value of normal and borderline cases was used to normalize all cases. The examination and scoring of all tissues were done by two investigators independently.

For immunofluorescent analysis, HEC1B cells were cultured on cover slips and transiently transfected with either RFP/Sox7 or GFP/mutant β-catenin S37A, or GFP/Sox7 and Flag/TCF4 and Myc/TCF4 expressing plasmids. After 24 hours, the transfected cells were fixed with 4% paraformaldehyde, treated with 0.1% Triton, incubated with anti-Flag (Sigma) and Alexa Fluor® Fluorescent Streptavidin Conjugates (Invitrogen), followed by counter-stained with DAPI (4’,6-diamidino-2-phenylindole) (Invitrogen), the fluorescent signals were examined and photographed by fluorescent microscopy (Leica Q550CW).

HEK293 cells were seeded in 24-well plates and transiently transfected with various amounts (0, 250 and 500 ng) of Flag/Sox7, 100 ng pLNCX-Wnt1, a pSuper8XTOPFlash or pSuper8XFOPFlash luciferase reporter constructs. All transfections were normalized with pcDNA vector and incubated for 24 hours. The luciferase activity was measured using the Dual-luciferase Reporter Assay System (Promega) and transfection efficiency was normalized with Renilla luciferase activity. All experiments were repeated in 3 independent experiments.

Cell viability was evaluated by Cell Proliferation Kit II (XTT) for 5 days according to the manufacturer’s instructions (Roche). The experiment was repeated in three independent experiments.

Student’s t test (for parametric data) and the Mann-Whitney test (for non-parametric data) were used. Statistical analyses on clinicopathological correlation were performed using the SPSS version 13.0 software (SPSS, Chicago, IL, USA). A p-value was considered significant when less than 0.05. 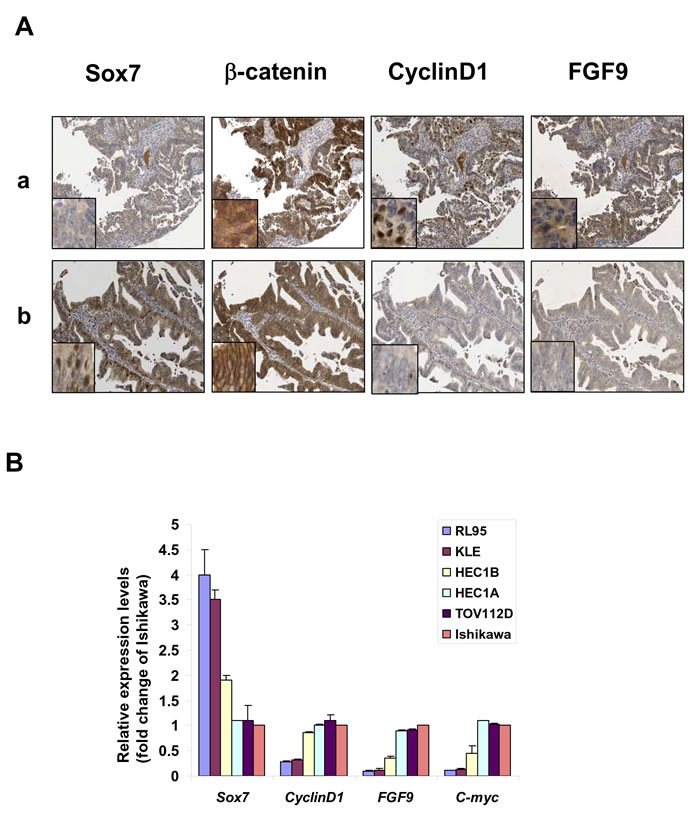 Figure 1: Sox7 is frequently underexpressed and inversely correlated with Wnt/β-catenin signaling in endometrial cancer. (A) Immunohistochemical analysis showed the presence of Sox7 could significantly reduce the expressions of CyclinD1 and FGF9 in β-catenin overexpressing endometrial cancer (x20). Nuclear Sox7, CyclinD1 and FGF9 immunoreactivities were commonly found in endometrial cancer. The immunoreactivity of β-catenin could be found in the nucleus, cytoplasm and membrane. (B) Real time quantitative RT-PCR analysis showed that underexpressed Sox7 was correlated with the increased expressions of CyclinD1, FGF9 and C-myc in Wnt/β-catenin signaling active endometrial cancer cell lines (HEC1B, HEC1A and Ishikawa) and an OEA cell line (TOV112D).

Sox7 is a negative regulator of Wnt/β-catenin signaling

To further demonstrate that Sox7 is able to suppress Wnt/β-catenin activity, we performed TOPFlash reporter assay using HEK293 cells [16]. Transfection of Wnt-1 expressing construct into HEK293 cells resulted in a 7.8-fold increase in β-catenin transcriptional activity. When Sox7 was co-transfected with Wnt-1, the β-catenin transcriptional activity was inhibited in a dose-dependent manner of Sox7 (P < 0.01) (Fig. 2A). Moreover, stably ectopic expression of Sox7 could remarkably reduce two Wnt/β-catenin downstream targets; C-myc and CyclinD1, in two Sox-7 deficient cell lines; HEC-1A and TOV112D, in a dose-dependent manner (Fig. 2B). Intriguingly, this inhibitory effect of Sox7 on Wnt/β-catenin signaling was not only restricted in wild-type β-catenin endometrial cancer cell line (HEC-1A) but also in mutant β-catenin OEA cells (TOV-112D) (Fig. 2B). Taken together, these data further implicate that Sox7 has inhibitory effect on Wnt/β-catenin activity in endometrial cancer cells harboring not only wild-type but also mutant β-catenin. 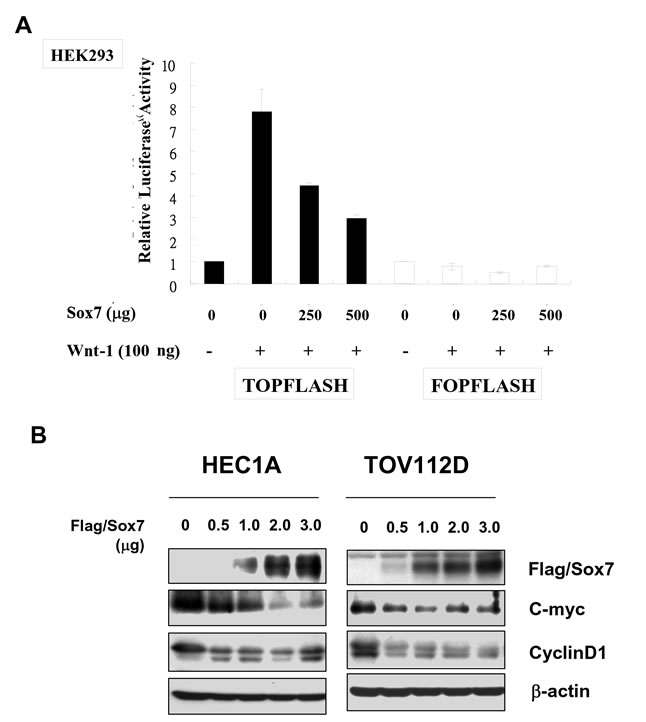 As the aberrant activation of Wnt/β-catenin signaling is involved in promoting cancer cell growth, it is of interest to examine the suppressive role of Sox7 in the cell growth capacity of endometrial cancer. We firstly generated stable expressing Sox7 clones in a wild-type β-catenin cell line HEC-1A (C2 and C9), and a mutant β-catenin cell line TOV112D (C5 and C6). Western blotting showed that the ectopic expression of Sox7 was accompanied with the reduced expression of CyclinD1 and C-myc in all clones of both cell lines (Fig. 3A & 3B). When co-treatment of Wnt3A conditioned medium, HEC-1A with wild-type β-catenin was markedly elevated in β-catenin, CyclinD1 and C-myc expressions. But the enforced expression of Sox7 could inhibit both CyclinD1 and C-myc significantly (Fig. 3A). On the other hand, the level of mutant β-catenin in TOV112D could not further be elevated upon treatment of Wnt3A, while Sox7 still had a suppressive effect on the expressions of CyclinD1 and C-myc (Fig. 3B). With XTT cell proliferation assay, we found that the Sox7 stably expressing clones of HEC-1A (C2 and C9) (P < 0.02) and TOV112D (C5 and C6) (P < 0.01) exhibited significant reduction of cell proliferation rate (28 to 35%) as compared with their vector controls (Fig. 3C & 3D). Upon treatment of Wnt3A conditioned medium, all Sox7 stable expressing clones in HEC-1A (P < 0.001) and TOV112D (P < 0.001) further displayed suppressive effect on cell proliferation rate as compared with their vector controls (Fig. 3C & 3D). These data suggest that Sox7 exerts inhibitory effect on Wnt/β-catenin signalling mediated cell growth in endometrial cancer cells. 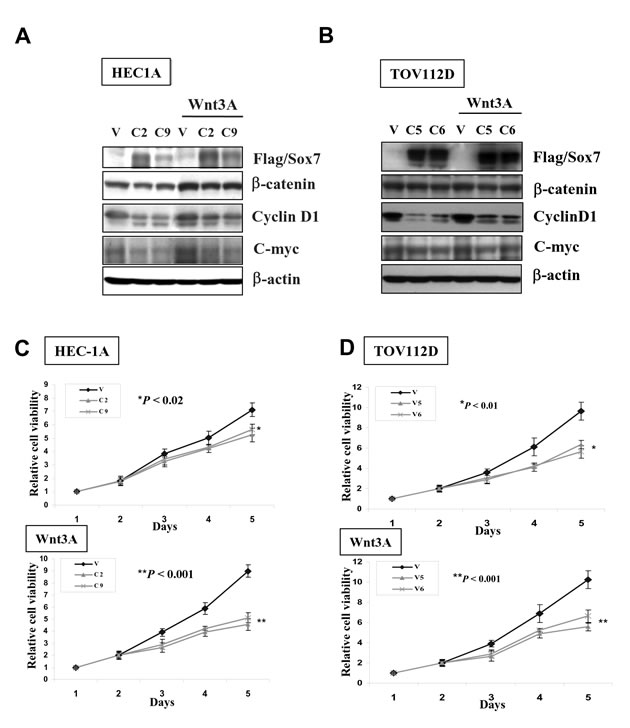 Sox7 interacts with wild-type and mutant β-catenin, as well as TCF4

Given that Sox7 can negatively regulate Wnt/β-catenin signaling activity through reduction of its downstream targets, it may interrupt the transcriptional activity of this pathway. Therefore, we were interested in whether Sox7 would interact with transcriptional factor complex β-catenin/TCF/LEF. We firstly examined the localization of Sox7, β-catenin and TCF4 in endometrial cancer cells, HEC-1A. By immunofluorescent microscopy, we demonstrated that RFP/Sox7 or GFP/Sox7 was localized mainly in the nucleus (Fig. 4A). Similarly, both GFP/mutant β-catenin S37A and Flag/TCF4 were also localized in the nucleus (Fig. 4A), indicating that all of these factors were co-localized in the nucleus of endometrial cancer cells. On the other hand, by co-immunoprecipitation assay, the Flag/Sox7 could strongly interact with HA/β-catenin, GFP/mutant β-catenin S37A, as well as Myc/TCF4 (Fig. 4B). These data indicate that Sox7 could interact with multiple factors such as wild-type and mutant β−catenin, as well as TCF4 in the nucleus of endometrial cancer cells. The interaction of Sox7 with these factors may impair the transcription activity of β-catenin/TCF/LEF transcriptional factor complex. 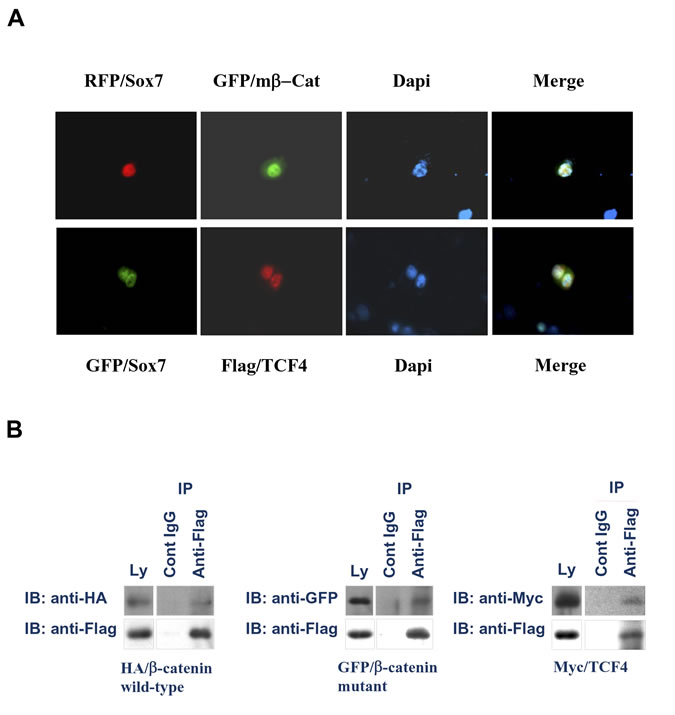 Figure 4: Sox7 interacts with β-catenin and TCF4 in the nucleus of endometrial cancer cells. (A) Immunofluorescent analysis showed that Sox7 (RFP-Sox7 (red) and GRF-Sox7(green)) co-localized with mutant β-catenin (GFP-mβ-Cat)(green) and Flag/TCF4 (red) in the nucleus of HEC1A cells. (B) Co-immunoprecipitation assay showed that Sox7 (Flag/Sox7) could interact with wild-type β-catenin (HA/β-catenin), mutant β-catenin (GFP/β-catenin mutant), and TCF4 (Myc/TCF4). IgG was used as a control antibody. Ly, total lysate control.

Mounting evidences have showed that aberrant activation of the Wnt/β-catenin signaling has associated with human cancers including endometrial cancer and ovarian endometrioid adenocarcinoma (OEA) [27-29]. Therefore, targeting Wnt/β-catenin signaling cascade is a potential good therapeutic approach to human cancers. The primary mediator of the oncogenic effects in this signaling pathway is β-catenin. Numerous studies have demonstrated that targeting the upstream effectors is able to inhibit Wnt/β-catenin signaling activity by reducing the level of β-catenin [30-33]. However, genetic mutation in β-catenin found in some human cancers such as endometrial cancer and OEA hinders the therapeutic approach of using inhibitors against upstream effectors in Wnt/β-catenin signaling cascade [34-36]. On the other hand, targeting the β-catenin/TCF protein complex will be a better choice in suppression of Wnt/β-catenin signaling activity. Indeed, numerous studies using small molecules have shown to inhibit this signaling activity successfully [37, 38]. Here we report Sox7 is a negative regulator of Wnt/β-catenin signaling and maybe a putative potential target in inhibition of this pathway activity. Our findings in this study provided several lines of evidence suggesting that Sox7 could suppress the transcriptional activity of β-catenin/TCF protein complex which harbors either wild-type or mutant β-catenin. According to our immunofluorescent microscopy, the nuclear co-localization indicated that there was a functional interaction among Sox7, β-catenin and TCF4. Indeed, further co-immunoprecipitation assay supported our notion of that there was a direct physical interaction between Sox7 with either β-catenin and TCF4. Based on these evidences, we hypothesized that the interaction of Sox7 might disrupt the transcriptional function of β-catenin/TCF/LEF-1 complex. However, further studies to investigate the interacting region and the binding effects of Sox7 and with β-catenin and TCF4 are warranted.

Although further studies are needed to delineate how the interaction of Sox7 mediated inhibition of -catenin/TCF/LEF-1 complex transcriptional activity, our findings collectively highlight the suppressive roles of Sox7 in Wnt/β-catenin signaling and its tumorigenic capacities in endometrial cancer cells carrying either wild-type or mutant β-catenin.

1. Lax SF. Molecular genetic pathways in various types of endometrial carcinoma: from a phenotypical to a molecular-based classification. Virchows Arch. 2004; 444(3):213-223.