Bone morphogenetic protein receptor type IB (BMPRIB) is one osteogenesis factor, which function in breast cancer has been rarely explored until recently. In the clinical study presented here, involving a cohort of 368 invasive ductal carcinoma (IDC) patients, we identified that patients with low expression of BMPRIB exhibited poor prognosis, especially in the luminal B subtype. We also provided the first piece of evidence that low level of BMPRIB was a promoting factor for breast cancer patients to develop bone metastasis, but not lung, liver or brain. The first of its kind, we reported that patients with high expression of BMPRIB exhibited favorable prognosis by a retrospective analysis consisting of 168 patients treated with TE (taxane and anthracycline) regimens. And the patients with high expression of BMPRIB were more sensitive to TE regimens in the detection of 32 paired pre-neoadjuvant and post-neoadjuvant specimens. Overall, our study concluded that low expression of BMPRIB indicated poor prognosis of breast cancer and was insensitive to taxane-anthracycline chemotherapy. Our findings also lay a foundation to help clinicians improve identification of patients for TE regimens by BMPRIB in the era of precision medicine.

Breast cancer is a common cancer in women and a major cause of cancer death among women of all races and populations, due to the development of secondary tumors in vital organs [1]. First metastatic lesions are found at the highest frequency in bone (83%) whereas liver and lung are usually affected to a lesser extent (27%) [2-3].

Bone morphogenetic protein receptor type IB (BMPRIB) as a member of BMPRs, could lead to the activation of intracellular signaling pathways and inhibited cell proliferation, migration, and invasiveness [4-7]. It has been reported that BMPRIB expression was higher in the normal, benign specimens and well-differentiated tumors compared with poorly-differentiated tumors in human prostate cancer, glioma, and ovarian cancer [8-12].

Reports of BMPRIB in breast cancer are few and contradictory [5, 13]. It was reported high expression of BMPRIB indicated a poor prognosis in estrogen receptor-positive breast cancer patients [13]. However, Bokobza et al.’s study presented an opposite conclusion in prognosis [5]. Such confused reports were probably due to small samples or unscientific division. Until present, there is still no comprehensive description which is capable of pointing out the accurate relationship between BMPRIB and breast cancer, particularly distant metastasis. 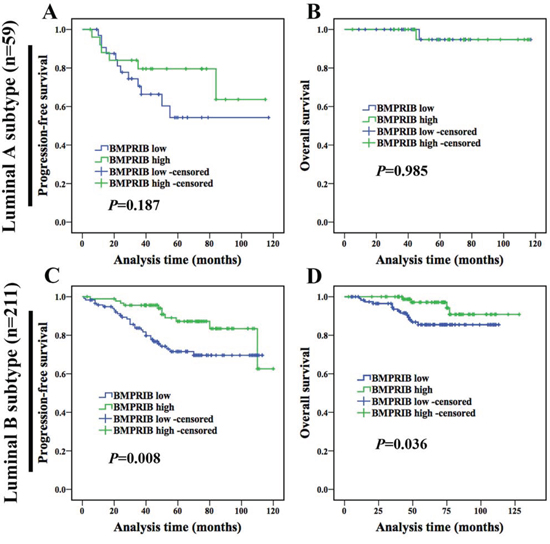 It was reported that docetaxel treatment was associated with expression of BMPRIB. Docetaxel (analogs of taxane) could reduce the expression of β1-integrin and then activated BMP signaling by up-regulating SMAD1/5/8 and p38 leading to an increased expression of BMPRIB [14-16]. In the following experiments, we examined the relationship of BMPRIB and taxane combined anthracycline (TE) based therapies. 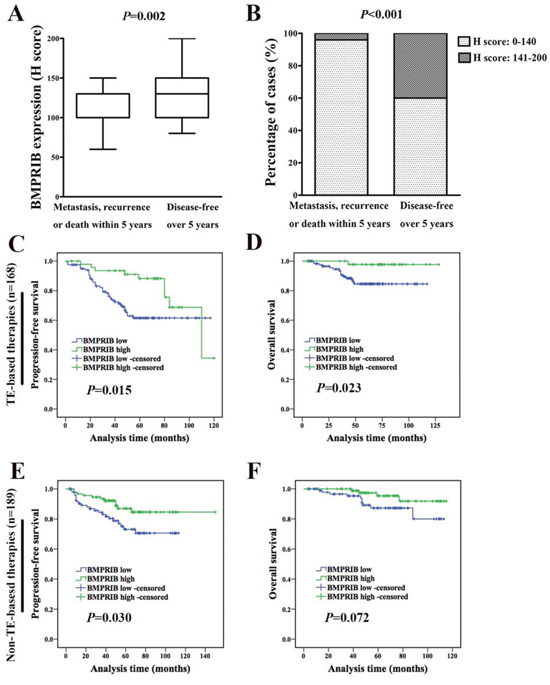 Patients with low expression of BMPRIB were insensitive to TE regimens 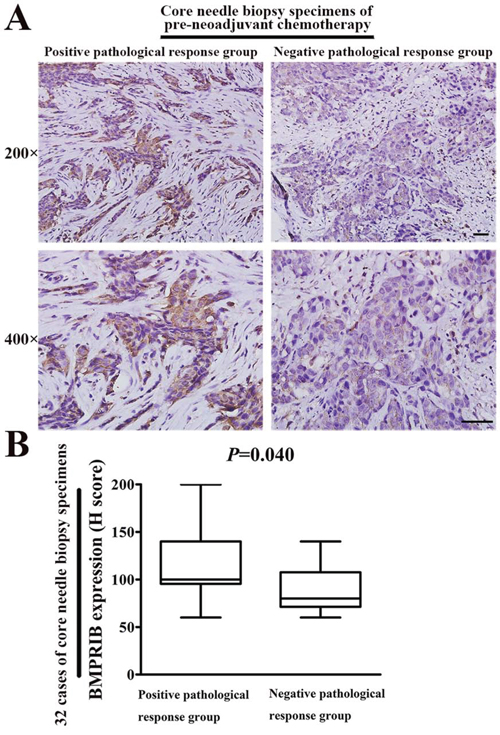 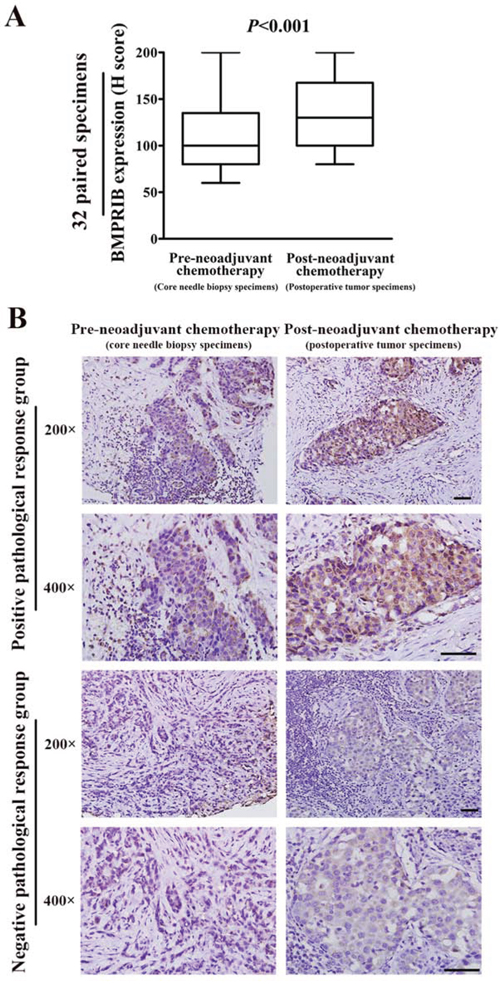 Multiple factors were reported to participate in breast cancer bone metastasis [17-23]. Buijs et al. showed that high expression of BMP 7 (a member of BMP family) inhibited the formation of bone metastases in breast cancer patients [24]. Lewis et al. found loss of BMPRIB induced increased expression of cytokeratin17, which is a promoting factor of invasion [6]. In our present study, novel evidence is provided that low level of BMPRIB was a promoting factor for breast cancer patients to develop bone metastasis, but not lung, liver or brain.

TE-based therapies are part of the standard of care in first line treatment of metastatic breast cancer and their clinical use is widespread [25-26]. Actually, only about 15% patients could achieve pathologic complete response, thus a more detailed classification is necessary to screen a more suitable population to TE regimens [27]. A potential predictor of response to TE chemotherapy is urgently needed.

Overall, our study concluded that low expression of BMPRIB indicated poor prognosis of breast cancer and was insensitive to taxane-anthracycline chemotherapy. Our findings also lay a foundation to help clinicians improve identification of patients for TE regimens by BMPRIB in the era of precision medicine.

Paraffin-embedded specimens of 368 breast cancer patients with invasive ductal carcinoma (IDC), diagnosed between 2004 and 2009, together with 40 cases of breast ductal carcinoma in situ (DCIS) and 52 cases of non-neoplastic tissues were reviewed and randomly selected from the archives of the Department of Breast Cancer Pathology and Research Laboratory, Tianjin Medical University Cancer Institute & Hospital (Tianjin, China) for this study. The histopathology was reviewed and diagnosis in each case was confirmed independently by two pathologists according to World Health Organization (WHO) criteria. This study was reviewed and approved by the Institutional Ethic Committee of Tianjin Medical University Cancer Institute & Hospital. All the patients signed an informed consent for participation of the study and the use of their biological tissues.

We also randomly selected another cohort of patients (32 cases) hospitalized during October 2005 to June 2009. All 32 patients were diagnosed with invasive breast cancer by 14-gauge core needle biopsy and then had completed with preoperative neoadjuvant chemotherapy consisted of 2 to 8 cycles of TE combined chemotherapy regimen without other local or systemic treatment before surgery. Patients were women 28 to 71 years of age (mean age 52.6 years) and had no other malignant tumors or tumor history. The distribution of clinical involvement showed that all the patients had tumors >2.0 cm. These 32 paired specimens were collected from each patient’s core needle biopsy specimens of primary breast tumor before neoadjuvant chemotherapy and its matching postoperative tumor tissues. All specimens were immediately fixed in 10% normal-buffered formalin and embedded in paraffin and stained for the presence of BMPRIB by immunohistochemistry.

The pathological response to neoadjuvant chemotherapy was evaluated after surgical resection of the remaining tumor and assessed according to Miller and Payne histological grading system: grade 1, no change or some alteration to individual malignant cells but no reduction in overall cellularity; grade 2, minor loss (up to 30%) of cancer cells but overall cellularity remains high; grade 3, reduction of 30% to 90% of cancer cells; grade 4, more than 90% loss of cancer cells but small clusters or widely dispersed individual cancer cells remain; grade 5, no malignant cells identifiable in sections from the site of the tumor consisting of vascular fibroblastic stroma, often containing macrophages; however, ductal carcinoma in situ (DCIS) may be present [29]. Of these 32 patients, there were 12 grade 1 responses, 9 grade 2 responses, 7 grade 3 responses and 4 grade 4 responses, but no grade 5 responses. In this study, the 32 patients were divided into two groups: one group was pathological response grade 2 to 4 which was regarded as positive and another group was pathological response grade 1 which was regarded as negative.

BMPRIB expression was examined by histochemistry techniques and S-P method. In brief, Sections (5μm thick) were dewaxed, hydrated, and heated for 2.5 min for antigen retrieval in a conventional pressure cooker by using citrate buffer, pH 6.0. Then sections were treated with 3% H2O2 for 20 min to reduce endogenous activity and incubated with 10% normal goat serum for 20 min to eliminate nonspecific staining. Next, the primary antibody against BMPRIB (rabbit anti-human polyclonal antibody, Santa Cruz, USA, sc-25455, 1:100) was applied at 4°C overnight. After washing, biotin labeled secondary antibody against rabbit immunoglobulin was applied for 20 min at room temperature. The slides were rinsed and covered with streptavidin-biotin-peroxidase for 20 min. All sections were stained with 3,3’-diaminobenzidinetetra-hydrochloride (DAB). Slides were counterstained with hematoxylin and mounted for light microscopy.

Using light microscopy, stained tissue sections were reviewed by two pathologists in a blinded manner. A consensus judgment was adopted for the intensity score of the tumors based on the strength of BMPRIB expression. 0 (-): no or low staining; 1 (+): moderate staining; 2 (++): strong staining. Percentage of the positive staining was scored as 0-100. An immunohistochemical score (H score) was ranged from 0 to 200 by multiplying the intensity and the percentage score. Patients were categorized into groups according to H score of BMPRIB: low BMPRIB expression (0-140), high BMPRIB expression (141-200).

Immunohistochemistry for estrogen receptor (ER) and progesterone receptor (PR) was re-evaluated using the 2010 American Society of Clinical Oncology/College of American Pathologists (ASCO/CAP) guideline. Cases were scored positive for ER and PR if nuclear immunoreactivity was present in more than 1% of tumor cells [30]. Immunohistochemistry for human epidermal growth factor receptor 2 (HER2) was re-evaluated using the 2014 ASCO/CAP updated guideline [31].

Western blot analysis was performed to evaluate the expression of BMPRIB in both non-neoplastic breast tissues adjacent to tumor and breast tumor tissues. Frozen breast tumor specimens (13 cases) and non-neoplastic breast tissues adjacent to tumor (13 cases) were collected between 2012 and 2015. All patients were women without preoperative chemotherapy or radiation. Tissues were lysed in 1×SDS lysis buffer (Tris-HCl, pH 6.8, 62.5 mM, 2% SDS, 10% glycerol) for 60 minutes on ice directly. Equal amounts of protein were separated by SDS-PAGE, and electrotransferred onto nitrocellulose membranes. Blots were analyzed by LiCor Odyssey infrared imaging.

The SPSS 13.0 software package (SPSS, Chicago, IL, USA) was used for statistical analysis. Mann-Whitney U test and χ2 test were performed for group comparisons and correlations between two variables were evaluated by Spearman rank correlation test. The relation between BMPRIB expression and distant metastasis was evaluated using Spearman rank correlation test. Progression-free survival (PFS) was defined as the time from surgery to recurrence or cancer-specific death, whichever occurred first. Overall survival (OS) was calculated from pathological diagnosis to the date of last contact or death from breast carcinoma. Survival analyses were performed according to the Kaplan-Meier method. Wilcoxon matched pairs signed rank test was performed for analyzing the expression of BMPRIB in 32 paired specimens. All statistical tests were 2-tailed and P < 0.05 was regarded as significant.