Analysis of risk and predictors of brain radiation necrosis after radiosurgery

Table 1: Characteristics of the cases of radiation necrosis 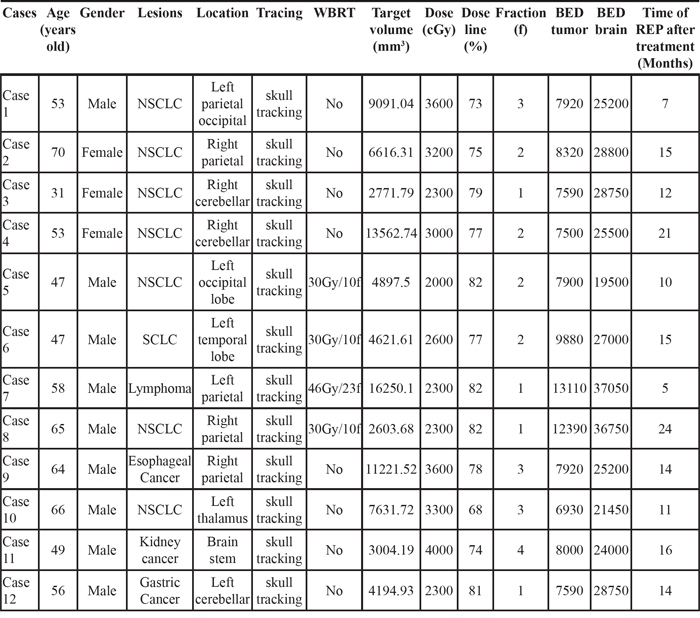 The results of the logistic regression showed that combination with whole brain radiotherapy, fractions, and BED were significantly associated with development of brain radiation necrosis in the model, and thus able to contribute to the development. See Table 2 for details. 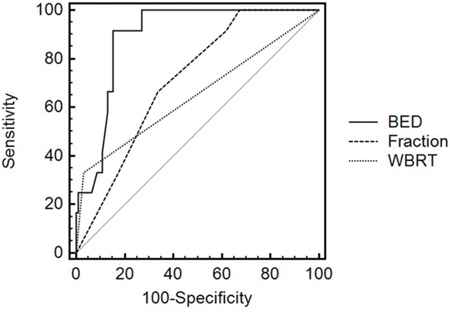 Brain radiation necrosis is caused by white matter injury characterized by loss of oligodendrocytes, along with demyelination (Glial Injury Hypothesis) [14, 15] or vasogenic edema (Vascular Injury Hypothesis) [16–18]. Radiation damage to glial cells and vascular endothelial cells can lead to various late effects in the brain, and the extent of the damage depends on the biological dose. This study showed that BED, combination with whole brain radiotherapy, and fractions would contribute to brain radiation necrosis following Cyberknife therapy. BED was higher in patients who had received whole brain radiotherapy as a result of adding together the doses of two treatment regimens. Brain belongs to late-responding tissues, and are found to have low values of α/β ratio, and are more susceptible to a single, high dose of radiation. If the total dose keeps unchanged, fewer fractions will lead to a higher BED, thus increasing the risk of brain necrosis. The ROC curve analysis further confirmed the founding from the logistic regression analysis.

Varying doses are always adopted during Cyberknife therapy for various patients with different treatment plans and treatment volumes. For patients with systemic metastases, palliative care with low-dose radiation was usually given to obtain symptom relief; whereas for patients with a single brain metastasis, a higher dose might have been prescribed. Furthermore, tumours with larger volume usually result in palliative treatment. This study created a good chance for research on radiation tolerance of brain tissue with the various prescription doses, and results showed that the treatment volume did not appear to affect the development of brain radiation necrosis.

In conclusion, by analyzing the brain necrosis cases, we explored various factors that may affect radiation necrosis in the brain, and the tolerated dose of hypofractionated radiotherapy for brain tumours. A reference dose level has been established to reduce the toxicity of Cyberknife therapy. We believe this study has paved the way for future research that will produce more substantial evidence to prevent brain radiation necrosis following Cyberknife SRT and improve treatment of brain cancer using Cyberknife.

The study was carried out in accordance with the institutional ethical guidelines and the use of patient information was approved by the Medical Ethics Committee of Tianjin Medical University Cancer institute and Hospital. Every patient involved in the study was asked to sign a piece of written informed consent which has been approved by the ethics committee of Tianjin Medical University Cancer institute and Hospital. The study was conducted according to the principles expressed in the Declaration of Helsinki. A total of 94 patients (mean age 51.5, range 6-85; 58 males and 36 females) with primary or metastatic brain tumours who had been treated with Cyberknife between September 2006 and October 2011 were collected and analyzed retrospectively. The inclusion criteria included primary or metastatic brain tumours, usage of Cyberknife SRT to treat brain tumours, follow-up of at least two-year, diagnosis of radiation necrosis confirmed by imaging or pathological examination. There were 104 targets, including 81 targets in 81 patients with brain metastases and 23 targets in 13 patients with primary brain tumours. Five patients (7 targets) received whole brain radiotherapy before Cyberknife SRT, among whom 4 (6 targets) were given a dose of 30 Gy/10f; and 1 (1target) 46 Gy/23f. Skull based tracking was used, together with a 60-87% isodose line (median: 79%), a dose of 1200-4500 cGy (median: 2550 cGy) and a BED of 2380-13110 cGy (median: 5130cGy) in 1-8 fractions (median: 3). BED=nd × (1+d/10); n: fraction, d: the dose of one fraction, α/β=10. See Table 5 for details.

Comprehensive imaging is the most realistic and most frequently used method in the diagnosis of brain radiation necrosis [7–9]. While pathological examination, although known as the golden standard, was unachievable due to the following reasons. Firstly, many of the brain tumors treated with Cyberknife are located near the skull base or in the important functional areas, resulting in impossibility of surgical resection or stereotactic puncture. Secondly, patients with history of Cyberknife treatment, especially those with multiple lesions, usually rejected a puncture because it is the last choice in clinical practice to perform puncture biopsy of every single lesion. Furthermore, even a stereotactic puncture may not be able to completely display the pathological characteristics of the involved tissue.

Therefore comprehensive imaging is the most realistic and frequently used method in the diagnosis of brain radiation necrosis[7–9], and we chose to make the diagnosis upon patients’ medical history, signs and symptoms, along with results of various imaging approaches such as MRI, nuclear magnetic resonance spectroscopy, and PET-CT [10–13] in this study. MRI scan and resonance spectroscopy were conducted first, and PET-CT further introduced if the diagnosis cannot be confirmed. Briefly, most brain necrosis showed irregular shape in MRI with hypointense on T1WI and hyperintense on T2WI. Moreover, liquefaction necrosis often represented with lower signal intensity on T1WI and higher signal intensity on T2WI. After administration of Gd-DTPA, irregularly enhanced signal without enhanced nodular was obtained in the lesions center, while a large area of edema belt in T1 and T2 signal without enhancement around the lesions. In MRS, Cho, Cr and NAA levels were reduced, and NAA/Cho and NAA/Cr radio decreased. In PET, the metabolic rate of brain radiation necrosis was lower than that of normal brain tissue, resulting in decreased uptake of FDG and defected radioactive imaging in the corresponding region. The diagnosis was all ultimately determined by 3 independent investigators. If a patient had severe symptoms but also indications for surgery, the lesion could be resected and the diagnosis confirmed by histology. In this study, there were 12 patients with brain necrosis, with 1 confirmed by pathology and 11 by imaging.

MRI assessment of brain lesions should be conducted regularly 2 months after the Cyberknife radiosurgery; patients should be re-examined once every 3 months within the following one year, and then re-examined if necessary for a maximum of 6 months. If symptoms of intracranial lesions occurred, re-examination should be done immediately. All statistical analyses were executed using SPSS 17.0 software. The level of significance was defined as P < 0.05. Logistic regression was performed to explore associations between brain radiation necrosis and factors including diabetes, cardio-cerebrovascular disease, age, gender, combination with whole brain radiation, prescribed dosage, fractions, isodose line, and BED. MedCalc software was used in ROC curve analysis which included all the statistically significant factors in the logistic regression model, and the threshold values of the factors were estimated.

This research was funded by National Natural Science Foundation of China (81301925).