Methods: We analyzed plasma ctDNA using digital polymerase chain reaction (PCR) from 18 patients with CRC, who had been treated with anti-EGFR antibody-based therapy (cetuximab) and subsequently acquired resistant cetuximab. HER2 gene copy number was analyzed using fluorescence in situ hybridization in tumor samples before and after acquisition of resistance to cetuximab-based therapy.

Conclusion: Analysis of plasma ctDNA by digital PCR could be useful for detecting HER2 amplification in patients with CRC who were resistant to anti-EGFR antibody therapy.

Colorectal cancer (CRC) is the third most common cancer in the world. Advances in systemic chemotherapies have led to significant improvements in survival for patients with metastatic CRC [1, 2]. Indeed, recent research efforts have focused on the development of agents targeting the epidermal growth factor receptor (EGFR), which is frequently overexpressed in colorectal cancer and contributes cancer cell proliferation, metastasis, and angiogenesis [3]. Anti-EGFR antibody therapies, including cetuximab and panitumumab, have improved the prognosis of patients with CRC, particularly in patients with the wild-type KRAS gene, in which these agents exhibit enhanced efficacy [4–7]. KRAS functions downstream of EGFR, and its spontaneous activation due to mutation promotes cell proliferation despite the presence of anti-EGFR antibody [8].

Repeated sampling of tumors is helpful to determine how tumors develop resistance after systemic therapy. However, this approach has limitations because of the invasiveness of biopsy procedures and tissue heterogeneity. Circulating tumor DNA (ctDNA) originating from tumor cells may reflect the pathological condition of the original tumor [13]. ctDNA can be obtained less invasively than tumor biopsies and can provide information regarding systematic tumor characteristics. Therefore, ctDNA may be useful for diagnosing how cancer cells acquire resistance. For example, a previous study detected the development of KRAS mutations in ctDNA from some patients with CRC who had been treated with anti-EGFR antibody therapy [14]. Therefore, it is possible that HER2 amplification may be detected in ctDNA from patients with CRC who have developed resistance to anti-EGFR antibody therapy. HER2 genomic amplification is rare in CRC [15], but is more frequent in patients with breast cancer [16] and can be detected in ctDNA [17].

In this study, we aimed to detect HER2 amplification in ctDNA from patients with CRC who acquired resistance to anti-EGFR antibody therapy.

Table 2. HER2 ratio with digital PCR and HER2 ECD in plasma

To examine the concordance of HER2 amplification between plasma ctDNA and tissue samples, we rebiopsied the metastatic lesion in patient #5 after acquisition of resistance to cetuximab therapy. HER2 expression levels were evaluated with immunohistochemistry (IHC), and HER2 genomic copy numbers were measured by fluorescence in situ hybridization (FISH) in tumors. IHC showed evidence of HER2 overexpression, scoring 2+ according to the diagnostic criteria for colorectal cancer [18], this feature was detected in the tumor obtained after acquisition of cetuximab resistance. In contrast, HER2 was not expressed in the primary lesion prior to cetuximab therapy (Figure 1). According to the diagnostic criteria for colorectal cancer, FISH analysis also revealed that HER2 amplification was acquired along with cetuximab resistance after cetuximab therapy (HER2 copy numbers: before therapy, 1.14 and after therapy, 2.78; Figure 2). 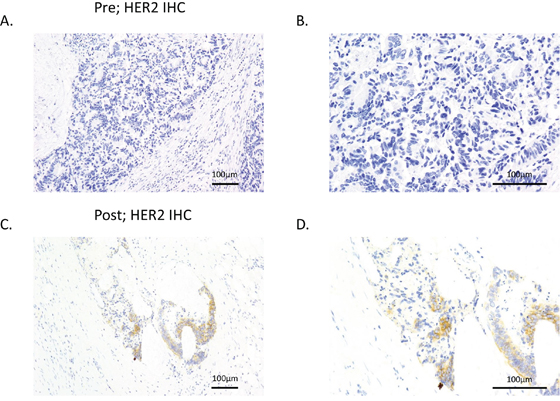 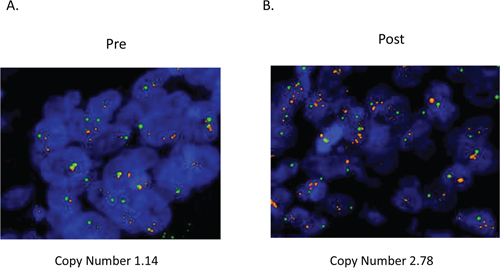 Several types of acquired resistance mechanisms for anti-EGFR antibody therapy have been described [19], and some related genomic alterations can be detected in ctDNA [9][14]. Consistent with our current study, Siravegna et al reported that HER2 amplification could be detected in plasma ctDNA from patients with CRC who were resistant to anti-EGFR antibody therapy. Importantly, they also identified genomic alterations, including KRAS, NRAS, MET, FLT3, EGFR, and MAP2K1, in plasma ctDNA from those patients [20]. Taken together, these data suggest ctDNA may provide an exhaustive genomic explanation, including HER2 amplification, for anti-EGFR antibody resistance in CRC.

There were no significant correlations between relative HER2 copy number ratios in ctDNA and the concentration of the extracellular domain of HER2. In particular, patient #5 exhibited HER2 amplification in plasma and in the tumor after cetuximab treatment, despite the reduced HER2 ECD level. The extracellular domain of HER2 is shed by protease-like ADAM10 in cancer cells. Alternatively, HER2 ECD could be metabolized systemically. These additional factors may affect HER2 ECD levels; therefore, HER2 ECD levels are not correlated with HER2 amplification in ctCDA.

Patients with HER2 amplification were resistant to anti-EGFR antibody therapy, but may benefit from other treatment strategies. Preclinical studies have shown that HER2-targeting therapy, including lapatinib or trastuzumab, can overcome cetuximab resistance in NSCLC and CRC cells with HER2 amplification [12]. Furthermore, Siena et al reported that trastuzumab and lapatinib combination therapy induced a partial response in seven of 22 patients (32%) with HER2-positive CRC who were resistant to anti-EGFR antibody therapy [24]. Additionally, Deeken et al reported that the combination of cetuximab and lapatinib provided a partial response in some patients with CRC who were resistant to anti-EGFR antibody therapy [25]. Therefore, these data suggest that evaluation of HER2 in ctDNA may be helpful for determining the optimal therapy involving HER2-targeting combination therapy rather than anti-EGFR antibodies alone in patients with CRC.

Plasma samples were obtained from 18 patients with histologically confirmed metastatic CRC who were treated with cetuximab-based therapy at Kinki University Hospital between November 2008 and October 2011. RESIST version 1.1 was used to assess best overall response. Written, informed consent was obtained from all participants. The study protocols were approved by the ethics committee of Kinki University Hospital.

Cell suspensions were dropped onto precleaned slides and air-dried. Three-day-old slides were analyzed using the dual-color FISH assay with the PathVysion DNA probe set. The slides were incubated in 70% acetic acid for 40 s, digested in 0.008% pepsin/0.01 M HC1 at 37°C for 5 min, fixed in 1% formaldehyde for 10 min, and dehydrated in an ethanol series. Formalin-fixed, paraffin embedded (FFPE) tissue sections from patients with CRC were subjected to dual-color FISH using the PathVysion probe (LSI HER2 SO/CEP17 SG, Abbott Molecular). Initially, the slides were incubated from 2 h to overnight at 56°C, deparaffinized in Citri-Solv, and washed in 100% ethanol for 10 min. The slides were sequentially incubated in 2× SSC at 75°C for 10–24 min, digested in 0.25 mg/m: proteinase K/2× SSC at 45°C for 10–24 min, washed in 2× SSC for 5 min, and dehydrated in ethanol. The probe was applied according to the manufacturer’s instructions to the selected hybridization area, which was covered with a glass coverslip and sealed with rubber cement. DNA denaturation was performed for 15 min at 85°C, and hybridization was allowed to occur at 37°C for 12–24 h. Post-hybridization washes were performed sequentially with 2× SSC/0.3% NP40 (pH 7.0–7.5) at 73°C for 2 min and 2× SSC for 2 min, and samples were dehydrated in ethanol. Chromatin was counterstained with DAPI (0.3 μg/mL) in Vectashield mounting medium (Vector Laboratories). Analysis was performed on an epifluorescence microscope using single interference filters sets for green (FITC), red (Texas red), blue (DAPI), dual (red/green), and triple (blue, red, and green) band-pass filters.

IHC assessment of HER2 expression

Sections of archived formalin-fixed, paraffin-embedded tissue (4 μm thick) were placed on slides coated with polylysine. After deparaffinization and blocking of endogenous peroxidase, HER2 immunostaining was performed using rabbit anti-human c-erbB-2 as a primary antibody (Dako Corp, Carpinteria, CA, USA) at a 1:100 dilution. Primary antibody binding was assessed using the Dako Quick-Staining, Labeled Streptavidin-Biotin System (Dako) and followed by the addition of diaminobenzidine as a chromogen.

Assessment of HER2 extracellular domain concentrations

Plasma was obtained from 16 patients with CRC after the acquisition of resistance to cetuximab. The HER2 extracellular domain was measured with a chemiluminescent immunoassay according to the manufacturer’s recommendations (Siemens Healthcare Diagnostics).

Plasma ctDNA was purified using a QIAamp Circulating Nucleic Acid Kit (Qiagen, Valencia, CA). HER2 copy number was measured using the QX100 Droplet Digital PCR System in accordance with the manufacturer’s instructions (Bio-Rad, Hercules, CA, USA). The relative HER2 copy number ratio was calculated relative to the control EFTUD2 gene, as previously described [17]. For HER2 copy number assays, the primer sequences were as follows: HER2 forward, 5′-ACAACCAAGTGAGGCAGGTC-3′; HER2 reverse, 5′-GTATTGTTCAGCGGGTCTCC-3′; HER2 probe, 5′-/56-FAM/AGGCACCCA/ZEN/GCTCTTTGAGG ACAAC/3IABkFQ/-3′; EFTUD2 forward, 5′-GGTCTTGCCAGACACCAAAG-3′; EFTUD2 reverse, 5′-TGAGAGGACACACGCAAAAC-3′; EFTUD2 probe, 5′-/5HEX/TCCAGGTAG/ZEN/GACATCCTTTGGCTTT/3IAB kFQ/-3′. PCR was performed using the following cycling conditions: 95°C for 10 min, 40 cycles of 94°C for 30 s, and 58°C for 90 s, followed by enzyme deactivation at 98°C for 10 min. After thermal cycling, the plates were transferred to a Droplet reader. We aimed to obtain at least 100 droplets for HER2 and EFTUD2 to accurately assess the ratio. Digital PCR data were analyzed using the QuantaSoft analytical software package (Bio-Rad). The copy number of each gene (HER2 and EFTUD2) was estimated from the Poisson distribution. HER2 amplification with digital PCR was defined as a HER2 ratio (HER2/EFTUD2 copy number ratio) of 1.25 [17].

This study was funded by Kinki University.