Patients and Methods: From Jan 2011 to Feb 2015, complete data was available for 137 out of 165 patients who received preoperative chemotherapy alone. All pre-treatment clinical parameters were collected. Tumor regression grade (TRG) 0-1 was defined as good regression, and pathological TNM stage (ypTNM) 0-I after neoadjuvant treatment was defined as good down-staging. Nomogram was established to predict tumor regression and down-staging. The predictive performance of the model was assessed with concordance index and calibration plots.

Conclusions: The model based on available clinical parameters could accurately predict early efficacy with neoadjuvant mFOLFOX6 chemotherapy alone, which might help in patient selection for optimized treatment.

In the past few decades, treatment outcomes for rectal cancer have shown tremendous improvement. Adoption of better surgical techniques and total mesorectal excision (TME) are cornerstones of the therapy [1, 2]. The introduction of neoadjuvant treatment in locally advanced rectal cancer further decreased the risk of local-regional recurrence [3, 4]. After publication of the CAO/ARO/AIO-94 (Working Group of Surgical Oncology/Radiation Oncology/Medical Oncology of the German Cancer Society) study in 2004 [5], preoperative chemoradiotherapy (CRT) with infusional fluorouracil and TME surgery became the standard-of-care for patients with stage II-III rectal cancer. The incidence of local recurrence at 5 and 10 years in preoperative CRT group was 5% and 7.1%, respectively, while in postoperative CRT group, the incidence was 9.7% and 10.1% [6]. However, about 30% of patients still developed distant metastasis after long-term follow-up, which remains the main obstacle for improving survival. The survival of patients with LARC is still as low as 65% [6]. Hence more effective systemic treatment options are needed.

Neoadjuvant chemotherapy-alone approach has been proposed [9]. A prospective pilot study by investigators of Memorial Sloan-Kettering Cancer Center evaluated neoadjuvant chemotherapy alone, with six cycles of FOLFOX plus bevacizumab in locally advanced rectal cancer patients. Thirty-two patients were enrolled with the pathological complete response (pCR) rate of 25% [10]. The promising results suggested that in the era of TME and high-quality magnetic resonance imaging (MRI), radiotherapy might be omitted in selected patients.

To avoid the damage of radiotherapy for rectal cancer patients, we designed a phase II study comparing neoadjuvant FOLFOX6 chemotherapy with or without radiation in locally advanced rectal cancer. The preliminary results were reported in ASCO annual meeting 2015 [11]. In the group of patients with neoadjuvant mFOLFOX6 chemotherapy alone, about 40% of patients showed good down-staging, and radiation therapy should be avoided in these chemo-sensitive patients.

In the past, many studies tried to find biomarkers to predict prognosis of rectal cancer after preoperative CRT, such as epithelial growth factor receptor (EGFR) and thymidylate synthase (TS) genes, and carcinoembryonic antigen [12-15]. However, most of them have not been used in routine clinical practice. Some other studies have established a nomogram predictive model with sequential PET-CT imaging for rectal cancer in patients receiving preoperative CRT, which is expensive and was also not regularly recommended in the management of rectal cancer [16, 17]. Until now, no predictive model has been developed for preoperative chemotherapy alone in locally advanced rectal cancer.

In this prospective study, we aimed to develop an accurate model and nomogram with available pre-treatment parameters to predict efficacy of locally advanced rectal cancer with mFOLFOX6 chemotherapy alone.

From Jan 2011 to Feb 2015, a total of 165 patients were enrolled into the group receiving preoperative mFOLFOX6 chemotherapy alone, among which, complete information was available in 137 patients. All patients were >18 years with histopathologically confirmed rectal cancer with an inferior margin no more than 12 cm above the anal verge assessed by MRI or CT with rectal ultrasound. The clinical stage was cT 3/4 or lymph node involvement (cN+) without distant metastasis as assessed by MRI or multislice CT. MRI was recommended for local staging. All patients were treated according to the protocol (NCT01211210) with 4 cycles of mFOLFOX6 chemotherapy alone before surgery and then underwent TME resection.

Pathologic tumor regression grade (TRG) was assessed semi-quantitatively by determining the amount of viable tumor versus fibrotic tissue according to the College of American Pathologists’ guidelines [18]. Tumor response was graded on a scale of 0 (complete response; no viable cancer cells) to 3 (poor response; minimal or no regression, extensive residual cancer), wherein grade 1 referred to moderate response or minimal residual cancer, and grade 2 indicated minimal response. In this study, TRG 0-1 was defined as good regression, while tumor down-staging to ypT0-2N0M0 was defined as good down-staging.

All patients gave written informed consent before entering the study. The study was approved by local medical ethics committee and was conducted in accordance to the Declaration of Helsinki and good clinical practice.

Binary logistic regression was used to analyze the effect of all parameters on TRG and down-staging. Variables that achieved significance at P < 0.05 were entered into the multivariable analyses via the logistic regression model. And the parameters that were significant under clinical consideration were also incorporated into the model. Statistical analyses to identify independent prognostic factors were conducted in SPSS 16.0 for Windows (SPSS, Chicago, IL). On the basis of the results of the multivariable analysis, a nomogram was formulated to provide visualized probability prediction using R 2.13.1 (http://www.r-project.org) with the survival and rms package.

Calibration and internal validation of the nomogram

The nomogram was validated internally with 1000 bootstrap resamples. The model performance for predicting outcome was evaluated by calculating the concordance index (C-index). The value of the C-index ranges from 0.5 to 1.0, with 0.5 indicating a random chance and 1.0 indicating a perfect ability to correctly discriminate the outcome with the model. Calibration of the nomogram for TRG and down-staging were performed by comparing the predicted survival with the observed survival after bias correction.

With pathological assessment, 10 patients had achieved TRG 0 (complete regression), 32 patients with TRG 1, and 95 patients with TRG 2 and 3 (poor regression); 56 (40.9%) patients were classified as having good down-staging with ypT0-2N0 (stage 0 and stage I). No patients developed distant metastasis immediately after neoadjuvant chemotherapy or surgery.

All significant parameters in the univariate analysis were entered into the multivariable analysis based on the logistic regression (Table 2). Only tumor circumferential extent (P = 0.014) and ApoA1 (P = 0.038) were independent predictors for TRG 0-1, while for good down-staging, only age (P = 0.02) and tumor circumferential extent (P = 0.004) were independent predictors. Tumor length has been reported earlier as an important predictor for pCR when receiving preoperative chemo-radiation [16]. Here we also selected tumor length into the model. ApoA1 was also included due to significance near decision boundary (P = 0.056).

Nomograms that incorporated the selected predictive factors were established (Figures 1 and 2). The nomogram demonstrated that tumor length and ApoA1 shared the largest contribution to good regression, followed by tumor circumferential extent. In predicting good down-staging, tumor circumferential extent showed the greatest contribution, followed by tumor length, Age, and ApoA1. Each of these variables was assigned a score on the point scale. Through adding up of the score of each variable and referring to the total point scale, we could draw a straight line to determine the estimated probability of TRG 0-1 and ypT0-2N0.

Figure 1: Nomogram for good regression prediction. A score for each predictor can be read out at the top scale (score). All summed scores can be converted directly to the probability of response.

Figure 2: Nomogram for good down-staging prediction. A score for each predictor can be read out at the top scale (score). All summed scores can be converted directly to the probability of response.

Calibration of the nomogram

The calibration plots presented good statistical performance upon internal validation between the nomogram prediction and actual observation for probability of TRG 0-1 (Figure 3) and good down-staging (Figure 4). The Harrell’s concordance index (C-index) for the established nomogram to predict tumor regression to TRG 0-1 was 0.72 (95% CI: 0.604-0.797) and 0.762 (95% CI: 0.681-0.844) for good down-staging. 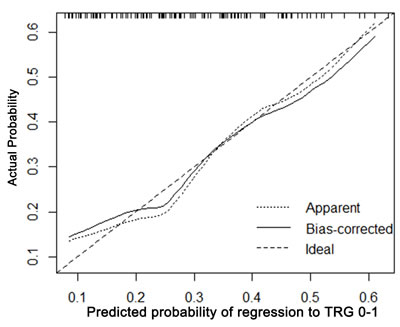 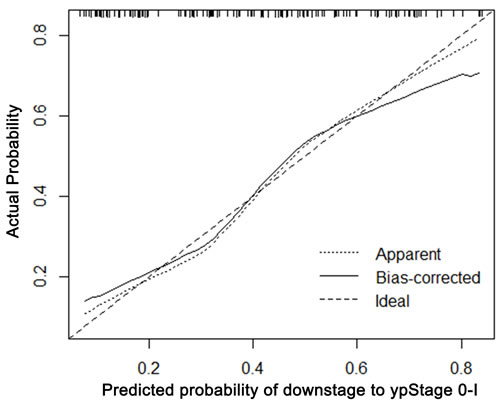 Chemotherapy-alone approach showed promising efficacy in the preliminary results of FOWARC study, although it is not the standard-of-care for locally advanced rectal cancer. [11]. To the best of our knowledge, this is the first nomogram to predict the early efficacy of neoadjuvant chemotherapy alone in locally advanced rectal cancer with a prospective cohort. Previously, all the predictive models were established basing on chemoradiotherapy [16, 17, 19].

As is known, pCR is the most robust surrogate endpoint for early efficacy and long-term survival in locally advanced rectal cancer [20]. However, in this prospective cohort, pCR rate was only about 7%, which is too low to build a model. Hence we measured the early efficacy in two ways, TRG 0-1 (30.6%) and ypT0-2N0 (40.9%) in this study. In fact, the most frequently used method to distinguish responders from non-responders is by means of TRG [18]. Furthermore, it has been demonstrated that TRG is the independent prognostic factor for cumulative incidence of distant metastasis and disease-free survival after CRT [21].

All the predictors in the nomogram were available in routine pre-treatment examination, which was easily to collect. Tumor length and tumor circumferential extent were selected in the model, both referred to tumor load. Tumor length has previously been reported to be the most important predictor for pCR in rectal cancer after neoadjuvant CRT [16]. In multivariate analysis, tumor length was not a predictor.. Given clinical consideration, we still integrated it into the model, which increased the c-index of the predictive model. . As for tumor circumferential extent, it has been proven that circumferential extent of tumors less than 1/2 cycle is associated with higher pCR rate [22]. Overall, tumor dimension is one of the important predictive factors for tumor regression and tumor down-staging.

Interestingly, ApoA1 showed predictive value in the analysis. In fact, the relationship between ApoA1 and tumorigenesis and development had been investigated in the past few years. It has been reported that the serum concentration of ApoA1 in breast cancer, colorectal cancer, and pancreatic cancer was lower than that of the control group, which was considered to be a serum marker for detecting carcinoma [23-25]. In preclinical study, ApoA1 has shown the potency of anti-angiogenesis [26]. Besides, in breast cancer, the expression level of ApoA1 increased in patients who showed good response to preoperative chemotherapy, which demonstrated that higher ApoA1 increased chemo-sensitivity [23, 27-29]. Here in the current study, we found that higher ApoA1 level was related to better response. Further investigations are warranted on the detailed mechanism of ApoA1 in increasing the efficacy of chemotherapy.

Age is one of the predictor in tumor down-staging. Young age was associated with better efficacy. Vincenzo, et al. also built a nomogram for predicting overall survival in rectal cancer. Age was also a positive predictor in the model. [30] . Surprisingly, CEA was not a predictive factor in our model. It has been reported that lower CEA level was correlated with better efficacy and long-term survival in rectal cancer after neoadjuvant CRT [12, 17, 31-34]. In our study, serum CEA level was lower than 5 ng/ml in most of the patients, with a median value of 2.38 ng/ml, which might contribute to the negative results. All the parameters were collected before administering any treatment. We only collected available clinical parameters. More predictors could be added to increase the performance of the model, including imaging variables such as apparent diffusion coefficient or T2 mapping of MRI [35-37] and biological variables such as gene signatures [15].

The limitations of the study are as follows. First of all, the samples size is relatively small. Second, external validation was not performed due to lack of external cohort, because neoadjuvant chemotherapy alone is still not the standard care for locally advanced rectal cancer. Prospective validation of the model is still required to ensure sufficient statistical power for clinical application.

In conclusion, the novel nomogram for predicting early efficacy of patients with locally advanced rectal cancer after receiving neoadjuvant mFOLFOX6 chemotherapy alone might promote personalized treatment approach in the future.

The authors state that they have no conflicts of interest.