Purpose: To assess the efficacy of neoadjuvant chemotherapy (NCT) plus targeted agents versus NCT alone for the treatment of colorectal liver metastases (CRLM) patients.

To improve the prognosis of CRLM patients, it is important to improve the liver metastasis treatment outcomes. Over the past decade, the introduction of irinotecan- or oxaliplatin-based combination chemotherapy have resulted in significant improvements in objective response rates and ultimately in overall survival of unselected patients with metastatic colorectal cancer [8–10]. In recent years, neoadjuvant chemotherapy (NCT) has been increasingly used in the management of liver-confined metastases from CRC. For patients with initially resectable disease, the use of NCT in CRLM might increase the complete resection rate and treat the micro-metastatic disease [3, 11]. When treating unresectable liver metastases of colorectal cancer, “conversion therapy” has been applied to reduce the tumor size and facilitate resection via preoperative chemotherapy [12, 13]. In addition, NCT can be used as a test of in vivo chemosensitivity, and patients with extremely aggressive disease, who will progress during preoperative chemotherapy, can be spared useless surgery. As a result, neoadjuvant chemotherapy combined surgery for liver metastasis is regarded as an effective strategy in CRLM patients.

During the past decade, the understanding of the molecular pathways that involved in tumor growth and metastasis has significantly increased and with this has come the development of several molecular targeted therapies [9, 14–16]. Two options are currently available in routine clinical practice for CRLM patients: Epidermal growth factor receptors (EGFRs) antibodies and vascular endothelial growth factor (VEGF) antibodies. The efficacy of these molecular targeted agents in the treatment of unselected metastatic CRC has been extensively investigated, but whether the addition of molecular targeted agents to NCT in CRLM patients would improve response rate and hepatic resection rate remains unclear. A recent meta-analysis conducted by Qi et al [17] showed that the addition of targeted agents to first-line chemotherapy for unselected advanced colorectal cancer significantly improved the complete response when compared with controls. However, it is still unknown whether this benefit in response rate would translate into an improvement in hepatic resection rate and R0 hepatic resection rate for CRML patients. We thus conduct this meta-analysis of published data to compare the efficacy of NCT plus targeted agents verse NCT alone in CRLM patients.

A total of 543 studies were identified from the database search, of which 54 reports were retrieved for full-text evaluation. 40 cohorts from 32 trials [24–54] met the inclusion criteria and were included in this systematic review: (Figure 1). Table 1 showed the characteristics of the included studies. Overall, 2099 CRLM patients were included, with a median age of 62.0 years [95% confidence interval (CI): 59.0–62.91] for the NCT alone group and 61.0 years (95% CI: 58.2–62.9) for the NCT plus targeted agents group. We found two randomized controlled trials comparing NCT plus cetuximab with NCT alone in CRLM patients, but no randomized controlled trials directly comparing NCT plus bevacizumab with NCT alone in these settings. Methodological quality of the included studies was fair; most studies provided adequate outcome ascertainment, enrolled a representative sample of patients, and had an acceptable length of follow-up (Figure 2). However, comparative evidence was at high risk of bias because we compared data across studies not within them, and selection bias was likely to be present. Assessment of publication bias was not done because data would be unreliable in view of the few studies included for each treatment group and high heterogeneity (I2 > 50%) in most analyses. 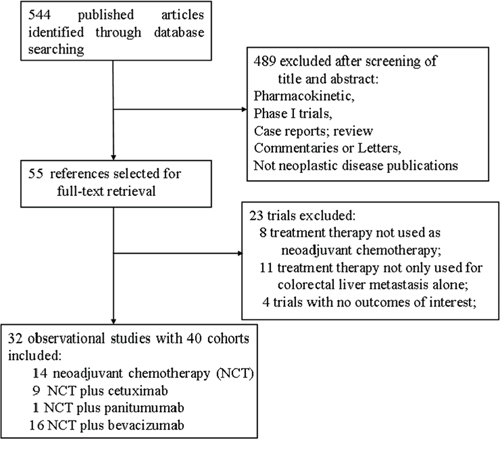 Figure 1: Selection process for clinical trials included in the meta-analysis. 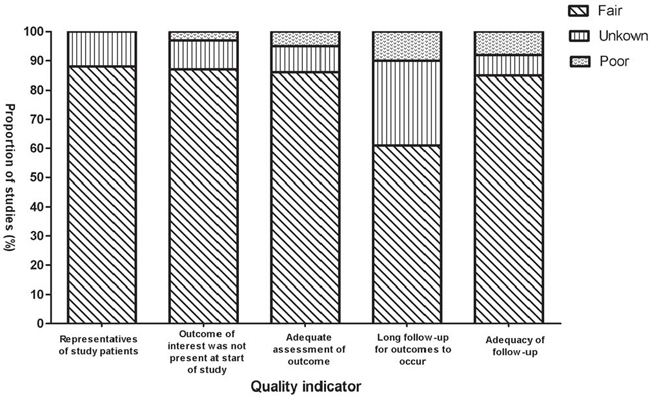 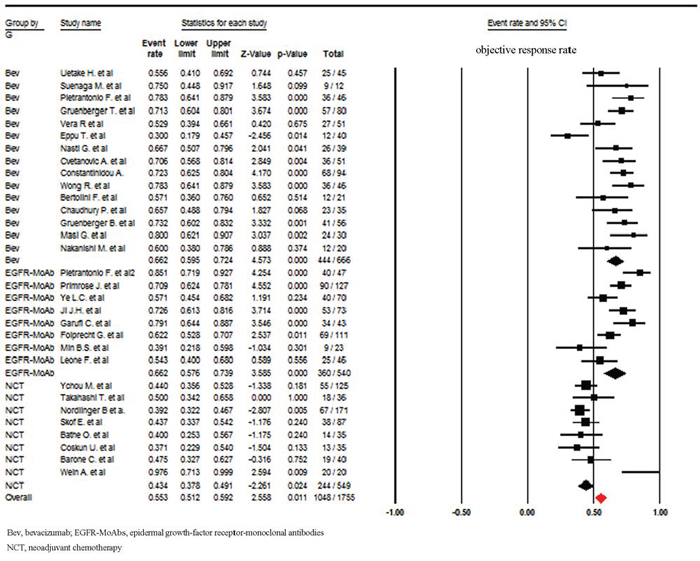 Figure 3: Incidence of objective response rate according to neoadjuvant regimens. 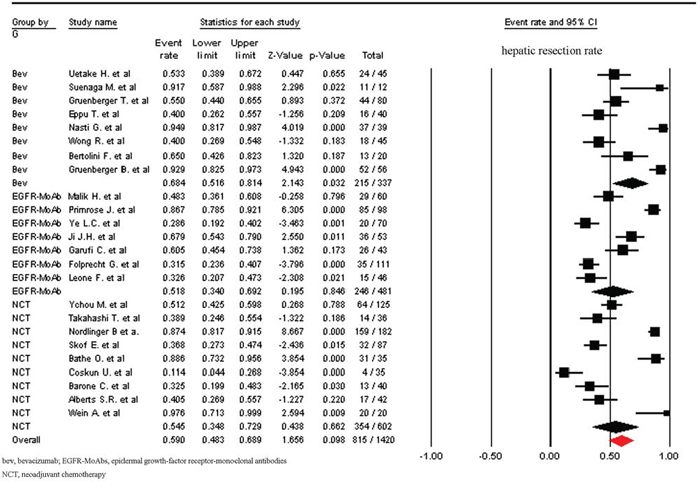 Figure 4: Incidence of hepatic resection rate according to neoadjuvant regimens. 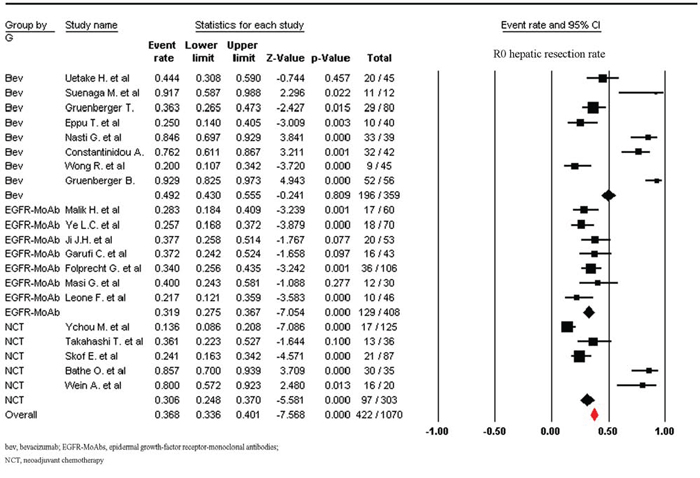 Efficacy comparison between NCT plus targeted agents and NCT

Table 2: Comparison of primary outcomes for NCT plus target agents versus NCT alone

I2 ≥ 50% suggests high heterogeneity across studies.

Table 3: Sub-group analysis of efficacy for NCT plus target agents versus NCT alone

The liver is the common metastatic site for colorectal cancer, and surgical resection is the only therapeutic modality that offers the potential for long-term cure. Appropriate patient selection for surgery and improvements in perioperative care has resulted in low morbidity and mortality rates, meaning that this is the therapy of choice in suitable patients. In recent years, the survival of patients with metastatic colorectal cancer has been improved, initially by the use of oxaliplatin- or irinotecan-based combination chemotherapy. Subsequently, it has been shown that the efficacy of cytotoxic chemotherapy can be enhanced by the addition of novel targeted agents, notably the anti-VEGF monoclonal antibodies and the anti-EGFR antibodies. However, the efficacy of targeted agents in neoadjuvant chemotherapy for CRLM patients remains unknown. Recently, two prospective randomized controlled trials have been conducted to investigate the efficacy of NCT plus cetuximab versus NCT alone in CRLM patients [33]. The trial conducted by Ye L.C et al showed that cetuximab combined with chemotherapy improved the resectability of liver metastases and improved response rates (57.1% versus 29.4%) and 3-year survival (41% versus 18%) in comparison with chemotherapy alone for K-RAS wild-type CRLM patients [33], while the New EPOC trial showed that the addition of cetuximab to neoadjuvant chemotherapy for K-RAS wild-type CRLM patients resulted in shorter progression-free survival (HR 1.48, 95% CI: 1.04–2.12, p = 0.03) [29]. Therefore, the role of cetuximab in neoadjuvant setting for CRLM patients is not established. In addition, to the best of our knowledge, there is lack of head-to-head comparison data available for NCT plus bevacizumab versus NCT alone in the treatment of CRLM patients. As a result, we conduct this systematic review and meta-analysis to evaluate the efficacy of NCT plus targeted agents versus NCT alone for the treatment of CRLM patients.

Several limitations exist in this analysis. First and most importantly, the application of formal meta-analytic methods to observational studies has been controversial [59]. One of the most important reasons for this is that the designs and populations of the studies are diverse, and that these differences may influence the pooled estimates. However, when no head-to-head comparison data available for NCT plus bevacizumab versus NCT alone, a meta-analysis of observational studies is one of the few methods for assessing efficacy [60]. Second, the study is a pooled analysis of primarily single arm prospective studies and retrospective series, with a small number of patients included that might have over-reported the benefit of preoperative treatments. The inclusion criteria also likely favor young, fit, and responder patients, a highly selected group of subjects with good prognostic indicators. Thirdly, this meta-analysis only considers published literature, and lack of individual patient data prevents us from adjusting the treatment effect according to disease and patient variables. Finally, we could not pool the results about QoL due to none of included trial reporting Qol results.

We developed a protocol that defined inclusion criteria, search strategy, outcomes of interest, and analysis plan. The reporting of this systematic review adheres to the Preferred Reporting Items for Systematic Reviews and Meta-Analyses (PRISMA) statements [18].

To identify studies for inclusion in our systematic review and meta-analysis, we did a broad search of four databases, including Embase, Medline, the Cochrane Central Register of Controlled Trials, and the Cochrane Database of Systematic Reviews, from the date of inception of every database to August 2014. The search included the following terms: “colorectal neoplasms”, “colorectal cancer”, “colorectal carcinoma”, “cetuximab”, “panitumumab”, “bevacizumab”, “aflibercept”, “targeted agents”, “neoadjuvant chemotherapy” and “perioperative chemotherapy”. Additional references were searched through manual searches of the reference lists and specialist journals. No language restrictions were applied.

Two investigators screened the titles and abstracts of potentially relevant studies. We retrieved the full text of relevant studies for further review by the same two reviewers. A third senior investigator resolved any discrepancies between reviewers. If reviewers suspected an overlap of cohorts in a report, they contacted the corresponding author for clarification; we excluded studies with a clear overlap.

The same pair of reviewers extracted study details independently, using a standardized pilot-tested form. A third investigator reviewed all data entries. We extracted the following data: author, study design, study period, median age, interventions (neoadjuvant chemotherapy regimens and dose), sample size and outcomes of interest. We defined outcomes of interest as overall resection rate, R0 liver resection rate and objective response rate (ORR). ORR was defined as the sum of partial and complete response rates according to the Response Evaluation Criteria in Solid Tumors [19]. To assess quality, since we included non-comparative (uncontrolled) studies in our systematic review and meta-analysis, we used the Newcastle-Ottawa quality assessment scale [20]. We selected items that focused on representativeness of study patients, demonstration that the outcome of interest was not present at the start of the study, adequate assessment of outcome, sufficient length of follow-up to allow outcomes to arise, and adequacy of follow-up.

We prespecified the analysis plan in the protocol. We analyzed all patients who started NCT or NCT plus targeted agents, regardless of their adherence to treatment. We calculated event rates of outcome (the proportion of patients who developed outcomes of interest) from the included cohorts for both NCT and NCT plus targeted agents. We pooled log-transformed event rates with DerSimonian and Laird random-effect models or using the Mantel-Haenszel test according to heterogeneity among included studies [21]. We used the test of interaction proposed by Altman and Bland to compare log-transformed rates of outcomes between NCT and NCT plus targeted agents [22]. A statistical test with a p-value less than 0.05 was considered significant. To account for the potential effect of publication bias, we used the Duval and Tweedie non-parametric trim-and-fill method [23]. To measure overall heterogeneity across the included cohorts, we calculated the I2 statistic, with I2 greater than 50% indicating high heterogeneity. We assessed potential publication bias by visual inspection of the symmetry of funnel plots and with the Egger regression asymmetry test. We did all statistical analyses with comprehensive meta-analysis software version 2.0(Biostat, Englewood, NJ, USA).

We are indebted to the authors of the primary studies, for without their contributions, this work would have been impossible.

12. Robl B, Pauli C, Botter SM, Bode-Lesniewska B, Fuchs B. Prognostic value of tumor suppressors in osteosarcoma before and after neoadjuvant chemotherapy. BMC Cancer. 2015; 15:379.