Adrenocortical carcinomas (ACCs) are complex neoplasias that may present unexpected clinical behavior, being imperative to identify new biological markers that can predict patient prognosis and provide new therapeutic options. The main aim of the present study was to evaluate the prognostic value of metabolism-related key proteins in adrenocortical carcinoma. The immunohistochemical expression of MCT1, MCT2, MCT4, CD147, CD44, GLUT1 and CAIX was evaluated in a series of 154 adult patients with adrenocortical neoplasia and associated with patients’ clinicopathological parameters. A significant increase in was found for membranous expression of MCT4, GLUT1 and CAIX in carcinomas, when compared to adenomas. Importantly MCT1, GLUT1 and CAIX expressions were significantly associated with poor prognostic variables, including high nuclear grade, high mitotic index, advanced tumor staging, presence of metastasis, as well as shorter overall and disease free survival. In opposition, MCT2 membranous expression was associated with favorable prognostic parameters. Importantly, cytoplasmic expression of CD147 was identified as an independent predictor of longer overall survival and cytoplasmic expression of CAIX as an independent predictor of longer disease-free survival. We provide evidence for a metabolic reprogramming in adrenocortical malignant tumors towards the hyperglycolytic and acid-resistant phenotype, which was associated with poor prognosis.

Adrenocortical carcinoma (ACC) is a rare and highly aggressive malignancy with an annual incidence of 0.7– 2.0 cases per million [1–3]. Surgery is the standard of care for localized adrenocortical carcinomas. To date, systemic treatment of advanced ACC has shown unsatisfactory overall response [4, 5]. Over the past two decades, considerable advances have been made into the understanding of molecular mechanisms, but is still not yet satisfactory [1, 2, 6].

Adrenocortical neoplasms have been a great challenge since they may present an unexpected biological behavior when using classic features commonly used for histopathological classification of neoplastic lesions, particularly in the borderline Weiss (scores 3 and 4) group. Therefore, it is imperative to find alternative information that can help determine with greater accuracy the possible biological behavior of patients with this disease, and, consequently, establish a correct therapeutic strategy [7, 8].

During carcinogenesis and tumor progression, neoplastic cells may reprogram their metabolism, showing a preference for glycolysis pathway for energy production, even in the presence of oxygen, a phenomenon known as the "Warburg effect". This aerobic glycolysis implies the conversion of pyruvate to lactic acid, leading to a reduction in intracellular pH [9]. To prevent acid-induced apoptosis as well as glycolysis inhibition by accumulation of the end product, cancer cells upregulate proteins related to pH regulation and lactate transport, including the glucose transporter GLUT1, the pH regulator carbonic anhydrase IX (CAIX) [10, 11] and monocarboxylate transporters (MCTs) [11]. Therefore, many malignancies show a significant increase in the expression of these plasma membrane transporters, with associations with poor patient's prognosis [12–15]. The MCT family has 14 members, being isoforms 1, 2 and 4 the most well studied isoforms responsible for the transport of monocarboxylates, including lactate, coupled with a proton across the plasma membrane. As consequence from their substrate affinities, MCT1 and MCT4 mediate monocarboxylate efflux from cells, while MCT2 is involved in monocarboxylate uptake [16]. Importantly, these transporters require co-expression with chaperones for proper plasma membrane localization and activity. The main chaperone of MCT1 and MCT4 is CD147 [17, 18], while MCT2 is mainly associated with gp70 [18]. CD44 has also been recently described as a MCT chaperone [19]; however CD147 and CD44 expressions do not account for all MCT1/4 positive cases, suggesting that an additional MCT chaperone still remains to be identified [20].

To the best of our knowledge, the metabolic profile of adrenocortical tumors is very little explored [21]. However, 18F-fluorodeoxyglucose positron emission tomography (FDG-PET) data suggest that adrenocortical carcinomas show high levels of glucose consumption [22–25], indicating a possible clinical relevance of the glycolytic metabolism for the management of this neoplasia. Given the importance of these neoplasms, particularly in the Brazilian environment [26, 27], and the potential use of molecular players of aerobic glycolysis as prognostic tools and therapeutic targets [10, 12, 28], the aim of the present work is to study the pattern of expression of the metabolism-related proteins MCT1, MCT2, MCT4, their chaperones CD147 and CD44, as well as GLUT1 and CAIX in adult ACC, and to determine whether these proteins have some biological and/or prognostic predictive value.

Expression of MCTs, CD147, CD44, GLUT1 and CAIX in adrenocortical adenomas and carcinomas

Figure 1: Immunohistochemical expression of MCT1 A. MCT2 B. MCT4 C. CD147 D. CD44 E. GLUT1 F. and CAIX G. in adrenocortical carcinomas. All the proteins were more importantly found in the plasma membrane of cells. 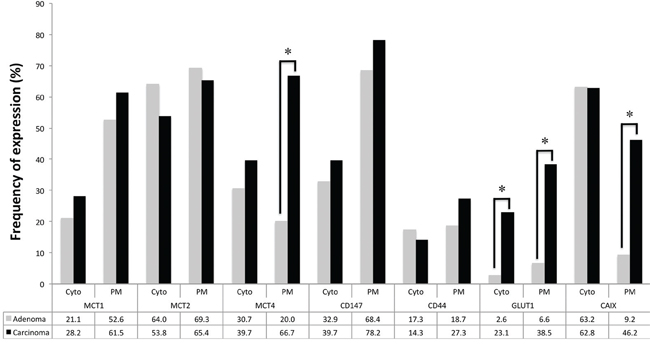 Clinicopathological significance of the metabolism-related proteins

Table 2: Association of plasma membrane expression of MCTs with the clinicopathological parameters in adult adrenocortical carcinomas

Table 3: Association of plasma membrane expression of CD147, CD44, GLUT1 and CAIX with the clinicopathological parameters in adult adrenocortical carcinomas 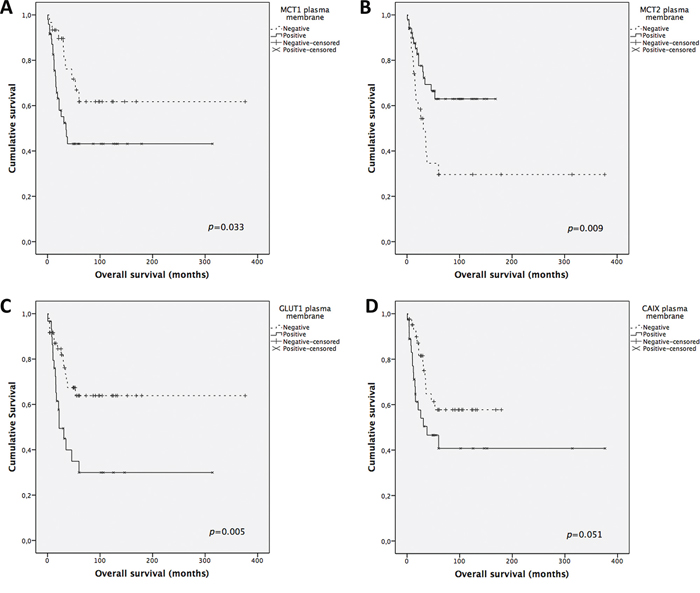 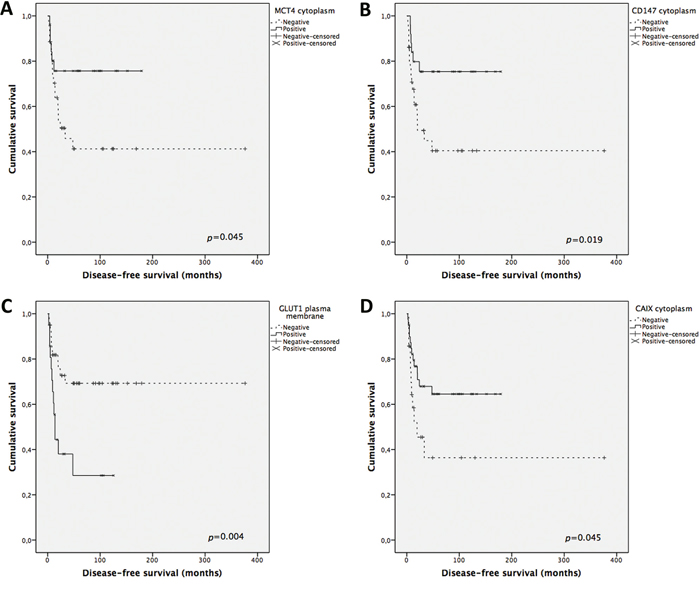 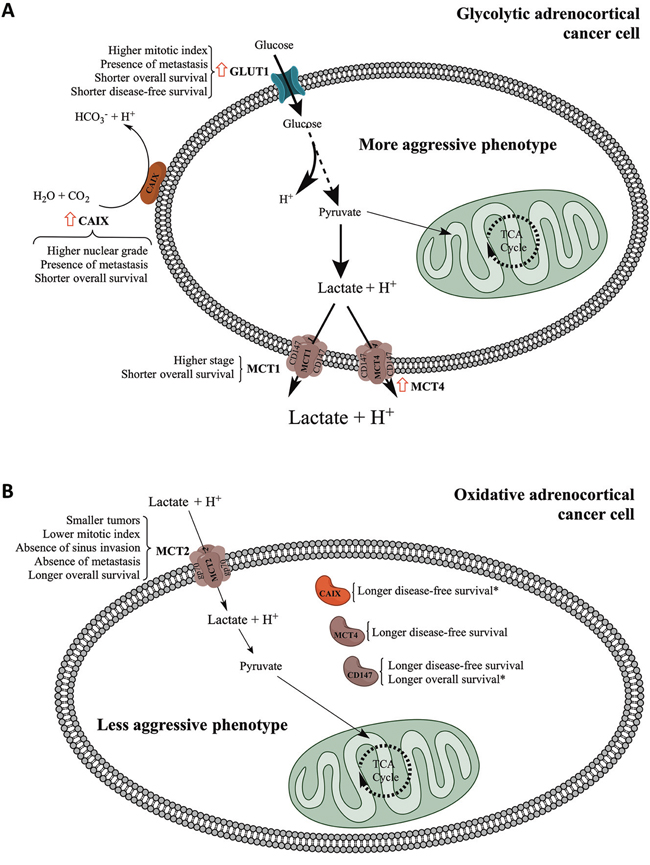 Figure 5: Schematic representation summarizing the major findings of the present work. The schematic representation distinguishes the major findings for plasma membrane and cytoplasmic expression of the different proteins studied. Red arrow: significant increase in expression frequency when comparing adenomas to carcinomas. *Independent predictors of survival as determined by multivariate analysis. 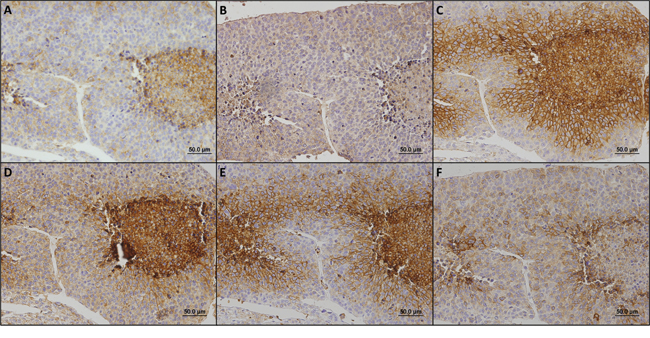 Figure 6: Immunohistochemical staining patterns of metabolism-related proteins in a case representative of the glycolytic phenotype. In this case, MCT1 A. MCT4 C. CD147 D. GLUT1 E. and CAIX F. were found in the plasma membrane while MCT2 B. was observed in the cytoplasm. 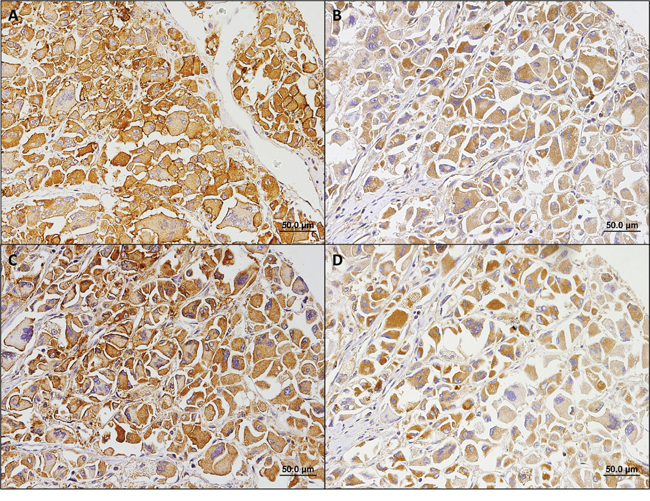 Figure 7: Immunohistochemical staining patterns of metabolism-related proteins in a case representative of the oxidative phenotype. In this case, MCT2 A. was found in the plasma membrane, while MCT4 B. CD147 C. and CAIX D. were found in the cytoplasm.

The increased frequency of MCT4, GLUT1 and CAIX plasma membrane expression of in adrenal cortical carcinomas suggests a metabolic remodeling of malignant cells towards a hyperglycolytic and acid-resistant phenotype, which is compatible with data from FDG-PET [22–25]. MCT2, mainly responsible for the uptake of monocarboxylates into cells [16], as expected, showed a slight but not significant decrease in the frequency of expression from adenomas to carcinomas, which is compatible with the metabolic reprogramming towards aerobic glycolysis in carcinomas. Although CD147 and CD44 showed no increase in expression in carcinomas, they were more frequently expressed in MCT positive tumors, which is in accordance with their role as MCT chaperones [17–19]. Notably, CD147 and CD44 did not account for all MCT1 or MCT4 positive tumors, suggesting the existence of an additional MCT chaperone, as already advocated by other study [20].

As vastly described, the metabolic reprograming of cancer cells is also involved in cancer cell aggressiveness and therapeutic resistance, rendering patients a poor prognosis [10]. The prognostic value of the metabolism-related proteins evaluated in the present study has been studied in a variety of tumor types; however, only GLUT1 has been evaluated in adrenocortical carcinoma [21]. In Fenske and colleagues study, GLUT1 was expressed in 33% of adrenocortical carcinoma samples, which is similar to the expression frequency found in the present study [21]. Herein, we show associations between GLUT1 and high mitotic index, presence of metastasis, and both longer overall and disease-free survival. This evidence is in agreement with the crucial role of GLUT1 in the metabolic reprogramming, as cancer cells are only able to depend on glycolytic pathway for energy production if the glycolytic flow is highly increased. This demands an increased uptake of glucose, mainly provided by GLUT1 in cancer cells [29].

MCT1 expression at the plasma membrane suggests a high lactate efflux from cancer cells, which, besides allowing glycolytic flux for energy production, also detains an important role in the microenvironment, by decreasing the immune response against tumor cells [30], increasing tumor cell motility [31], inducing angiogenesis [32], as well as stimulating hyaluronan and its receptor CD44, molecules involved in the process of cancer invasion and metastasis [33]. These roles of lactate in the extracellular milieu are in accordance with the association of MCT1 expression with high stage and shorter overall survival. In opposition, plasma membrane expression of MCT4, which was increased from adenomas to carcinomas, showed no association with the clinicopathological parameters. However, cytoplasmic expression of MCT4, as well as CD147, was associated with absence of metastasis. In accordance, cytoplasmic expression of MCT4 and CD147 was also associated with longer disease-free survival, while cytoplasmic expression of CD147 also showed a tendency to be associated with longer overall survival. Further studies are warranted to elucidate the role of MCT4 in the cytoplasm. Importantly, MCT2 plasma membrane expression was associated with good prognostic variables, including small tumor size, low mitotic index, absence of sinus invasion, absence of metastasis and longer overall survival. MCT2 expression at the plasma membrane suggests monocarboxylate consumption (likely lactate) from the extracellular environment. Since MCT2 plasma membrane expression is independent from MCT1 or MCT4 (data not shown), MCT2 positive tumors may present a metabolic symbiosis between cancer cells, in which the peripheral and oxygenated oxidative cells consume, through MCT2, the lactate released, through MCT4, by the central and less oxygenated glycolytic cells [34]. As a result, lactate will no longer act in the microenvironment to stimulate tumor aggressiveness. This rationale is in line with the evidence that MCT2 expressing tumors show a less aggressive phenotype than MCT2 negative tumors. Finally, we found CAIX to be more frequently expressed at the plasma membrane of tumors showing high nuclear grade and presence of metastasis, which is in accordance with the contribution of CAIX to the acid-resistant phenotype, rendering cancer cells a survival advantage that will contribute to cancer progression. Also, since CAIX contributes to the extracellular acidification, this pH regulator has a role in the acid-mediated cancer cell invasive behavior [35].

In the present study, we provided evidence for a metabolic reprogramming of adrenocortical malignant tumors towards the hyperglycolytic and acid-resistant phenotype characteristic of the Warburg effect, which associates with a worse prognosis. Since only few studies are available on the metabolic reprogramming of adult adrenocortical carcinoma, we believe that the results from the present study may bring new and relevant knowledge about the biology of this rare type of cancer, with possible developments in adrenocortical carcinoma management and the search for new target-directed therapeutic resources.

The series analyzed included 154 formalin-fixed paraffin-embedded adrenocortical neoplasias (76 adenomas and 78 carcinomas, according to Weiss score), retrieved from the files of the Pathology Department of the Clinical Hospital, School of Medicine, University of Sao Paulo, Brazil. No case included in this series fulfills the criteria for oncocytic tumor. Samples were organized into tissue microarrays (TMA) containing 208 cores each (1.0 mm diameter each core). Each case was represented in TMAs by three cores and control samples (kidney) were also included for TMA orientation. Clinicopathological data for the adrenocortical carcinomas included age at diagnosis (normal distribution, mean 40.6 years, range: 15 to 81 years), gender, tumor size (normal distribution, mean 11.8 cm, range: 2.2 to 23.0 cm; categorized using 8 cm as cut-off [36]) and weight (non-normal distribution, median 467.2 mg, range: 10 to 2600 mg), Weiss score and each of its individual histological parameters [37], tumor p53 status, staging (according to ENSAT system [38]), metastasis, disease-free survival and overall survival (median 13.5 and 30.5 months, respectively). Cases that could not be evaluated by Weiss score were classified as carcinomas if metastatic disease was detected (clinically malignant). Detailed information of the clinicopathological data for the adrenocortical adenomas as well as the adrenocortical carcinomas is presented in Tables 5 and 6, respectively. The present study was approved by the Local Ethic Committee (number 11090).

*Nuclear grade and mitotic index were defined according to Weiss score definitions (30).

$Cases classified as carcinoma (Weiss ≥ 3) based on the presence of metastatic disease.

*Nuclear grade and mitotic index were defined according to Weiss score definitions (30).

Table 7: Detailed aspects for each antibody used in immunohistochemistry

6. Faria AM, Almeida MQ. Differences in the molecular mechanisms of adrenocortical tumorigenesis between children and adults. Mol Cell Endocrinol. 2012; 351:52–57.