* These authors equally contributed to this work

KRAS mutations seem to indicate a poor outcome in Non-Small-Cell Lung Cancer (NSCLC) but such evidence is still debated. The aim of this planned ancillary study within the TAILOR trial was to assess the prognostic value of KRAS mutations in advanced NSCLC patients treated with platinum-based first-line chemotherapy. Patients (N = 540), enrolled in the study in 52 Italian hospitals, were centrally genotyped twice in two independent laboratories for EGFR and KRAS mutational status.

Of these, 247 patients were eligible and included in the present study. The primary endpoint was overall survival (OS) according to KRAS mutational status in patients harboring EGFR wild-type.

KRAS is the most frequently mutated oncogene in Non-Small-Cell Lung Cancer (NSCLC) [2]. KRAS mutations are present in approximately 20% of lung adenocarcinomas, are more frequent in smokers, while infrequent in squamous cell tumors [3]. KRAS mutations in NSCLC are mainly missense in exon 2, codon 12 and 13, although other rare variants, such as codon 61, are also occasionally detected [4].

Although the ras gene was discovered almost thirty years ago, the role of KRAS mutations as prognostic and predictive markers in NSCLC cancer is still contentious [5, 6]. The available meta-analyses suggest that patients with wild-type KRAS have a better prognosis. On the other hand, the predictive role of KRAS mutations is uncertain caused by evidence mainly based on retrospective series with contradicting results likely due to patients selection bias, and therefore to the lack of proper planned randomized trials [7-11].

In addition, it seems that different types of KRAS mutations, according to the replaced bases, have a different role in carcinogenesis and drug response [12-15].

The aim of the study was to investigate, in terms of overall survival (OS) and progression free survival (PFS), the role of KRAS mutations in advanced EGFR wild-type NSCLC patients treated with first-line platinum-based chemotherapy.

The CONSORT diagram is illustrated in Figure 1 whereas the baseline characteristics of the patients included in the study according to KRAS mutational status are illustrated in Table 2.

One-hundred and thirty-five patients were randomized in the main clinical trial. In particular, 52.4% and 56.7% of wild-type and mutated patients respectively were further treated with docetaxel in second-line treatment. On the other hand, 47.6% of wild-type and 43.3% of mutated patients received erlotinib. Among the randomized patients a higher percentage of patients with KRAS mutant tumor did not reach the third-line treatment (76.7%) compared to wild-type (54.3%) (P = 0.028). 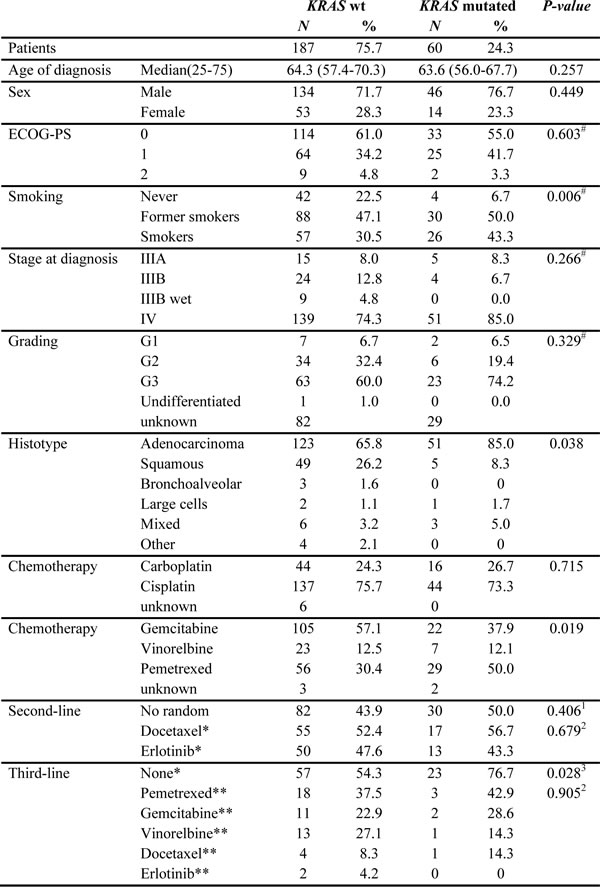 3 comparison between treatment performed and no treatment 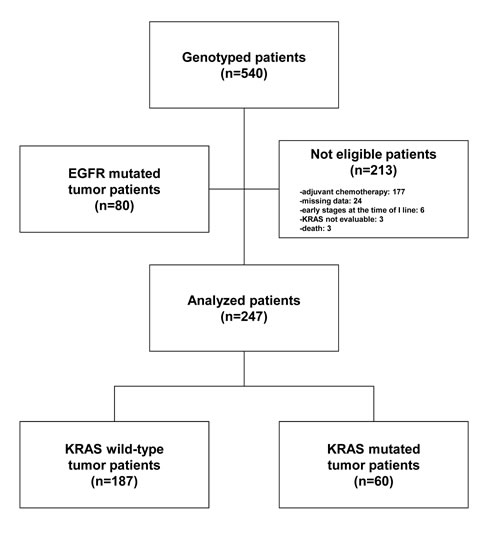 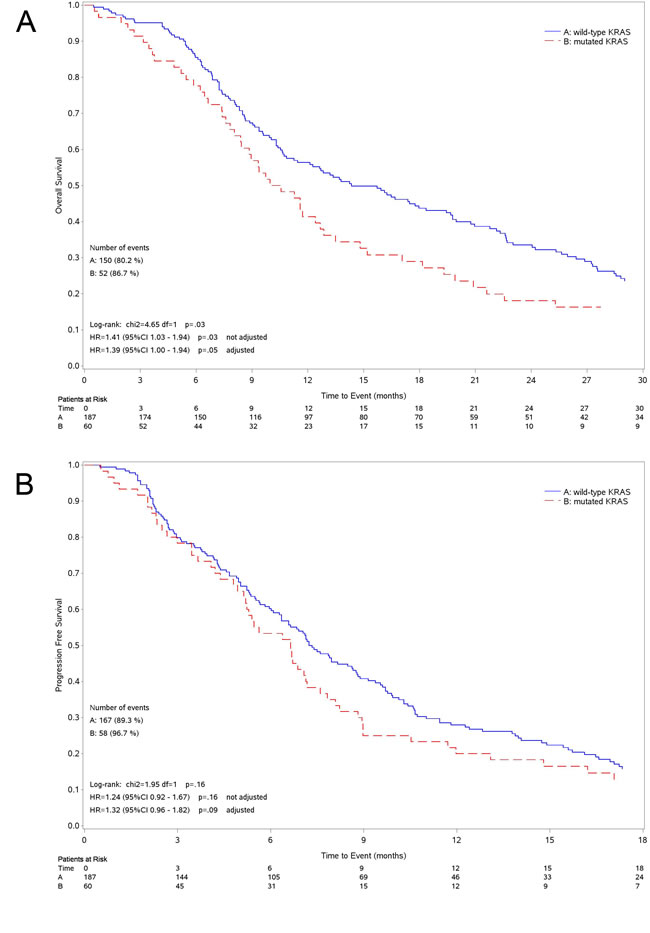 Figure 2: Kaplan-Meier curves for survival. Curves for overall survival A. and progression free survival B. according to the KRAS status. 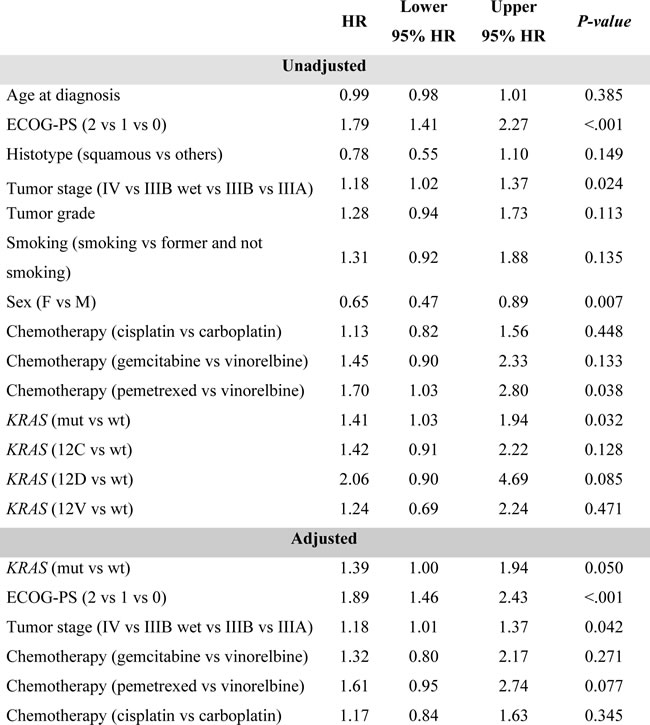 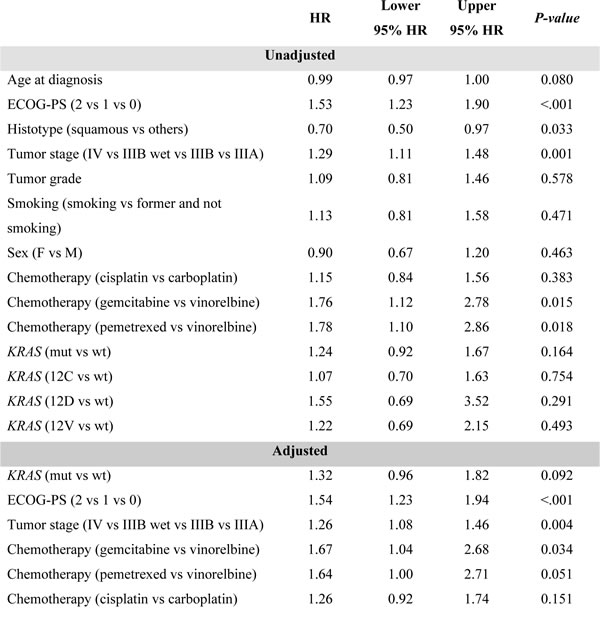 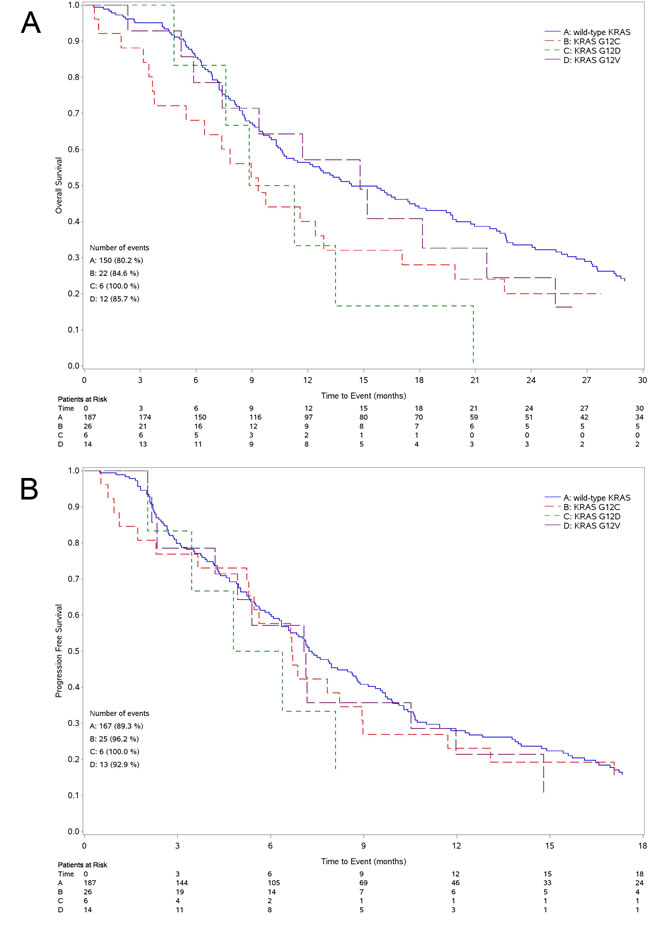 Figure 3: Kaplan Meier curves for survival. Curves for overall survival A. and progression free survival B. according to the main different types of mutations (G12C, G12D, G12V).

In the last 20 years many studies, including meta-analyses, with more than 8,000 patients considered have been published analyzing the prognostic and predictive role of KRAS mutations in NSCLC The majority of these results indicated KRAS as a negative prognostic and predictive marker [7-11, 17]. All these data were drawn from uncontrolled series and they included patients with different biological characteristics.

Our study confirms that a small negative prognostic effect of KRAS mutations can be observed in advanced NSCLC patients treated with a platinum-based doublet when EGFR mutant patients are excluded from the analysis. TAILOR results are superimposable to those found by Mascaux et al., the only meta-analysis performed on the role of KRAS in predicting efficacy of chemotherapy [10].

In addition, our epidemiological results are in line with literature: KRAS mutations are strongly correlated with smoking habit and adenocarcinoma histology and are mutually exclusive with EGFR mutations [3].

In a planned subgroup analysis of the main TAILOR study the KRAS mutations effect was not so clearly observed, although we cannot exclude a similar effect to the one presented in this paper with higher number of patients [18]. This difference may lay in the low statistical power of the TAILOR second-line subgroup analysis, or it may depend on a selected population with a better prognosis that can receive a second-line. Considering that a higher percentage of patients with a mutant KRAS tumor did not even underwent third-line treatment compared to wild-type we do not find these results in contrast with those previously reported by our group.

This analysis has some strengths and some limitations. The major strength is that this is the only pre-planned study in which KRAS status was evaluated in all consecutive patients included in the analysis and for whom EGFR mutations were also known. However, it is not possible to discriminate if the slightly worse prognosis of KRAS mutated patients is dependent on the poor prognostic effect of KRAS mutation or on a lesser response to the chemotherapy of these patients.

The treatment choice was done by physicians based on patients and disease characteristics therefore we cannot differentiate the final effect of cisplatin, carboplatin or other chemotherapeutic doublet agents according to KRAS status. On the other hand, the association between KRAS status and type of first-line chemotherapy can be explained by choice of treatment based on tumor histology, which is associated to the KRAS status. Nevertheless, the poorer outcome of mutated KRAS patients cannot be explained by a confounding effect related to second-line treatments given that wild-type and mutated KRAS patients were equally distributed in the two treatment arms in the main trial.

Results of the LACE-Bio pooled analysis, the largest pooled analysis encompassing 1543 patients from four large adjuvant studies (JBR.10, ANITA, CALGB, IALT), showed that there is no difference in terms of prognosis in early stage lung cancer patients with either wild-type or mutated KRAS [19]. Our different results could raise the hypothesis that KRAS mutations may play a different role in early and in advanced disease. This biological hypothesis could corroborate the evidence that, in advanced stages, KRAS is a condition necessary, but not sufficient to explain a more aggressive phenotype. Other additional factor(s) could contribute to this KRAS effect such as DNA repair capability. Advanced KRAS mutated tumors might have a DNA repair imbalance more pronounced than in early stages and our group is working actively on this issue [20, 21].

Due to small sample number, we are not able to elucidate any role for the three single most common KRAS mutations although the different variants seem to confer different OS when compared to the wild-type. Interestingly enough, preliminary preclinical data obtained in our laboratory in isogenic NSCLC cells differing only for the presence of KRAS mutations seem to suggest that the activity of cisplatin is different in cells expressing the different KRAS mutations [12].

Furthermore, the LACE-Bio pooled analysis pointed out that mutations in the codon 13 may confer a worse prognosis than others [19]. Although in TAILOR we have only an handful of G13 mutations, results seem to confirm this hypothesis.

The concept that not all KRAS mutations behave in the same way and that they differently impact on tumor progression has been addressed [12, 14, 15]. This data together with the indications reported in our study may suggest that proper trials need to be planned to define the role of the specific mutations in terms of response to treatment and tumor progression.

In conclusion, although KRAS showed a prognostic effect in first-line platinum-based treatment in advanced NSCLC, this study leads us to conclude that it is not warranted to test KRAS in clinical practice, at least until a specific targeted therapy is available for this group of patients. However, the potential mechanism of resistance to platinum-based therapies of these tumors should be further explored.

TAILOR was a not-for-profit multicentre, open label, randomized trial, funded by the Italian Regulatory Agency AIFA and conducted in 52 Italian hospitals, comparing erlotinib versus docetaxel in second-line NSCLC and details have been published elsewhere [16]. Within the TAILOR trial we planned an ancillary study to assess the prognostic value of KRAS mutations in advanced NSCLC patients treated with a first-line platinum containing regimens.

Briefly, tumor samples from registered patients were histologically centrally reclassified according with the 2004 WHO classification. Suitable samples were genotyped in parallel by investigators in two independent laboratories using two different techniques: EGFR by Sanger’s sequencing and restriction fragment length polymorphism whereas KRAS by Sanger sequencing and high-resolution melting analysis. Scorpion/ARMS technique was used for low-material samples. The Italian central authority and ethical review board at each participating Institution approved the protocol. The study complied with the declaration of Helsinki and was done in accordance with good clinical practice guidelines. Trial Registration: clinicaltrials.gov identifier NCT00637910.

Participating centers registered all consecutive patients with NSCLC before or during first-line platinum-based chemotherapy as well as patients recurred after a first-line adjuvant platinum-based chemotherapy. Only those with both EGFR and KRAS status centrally determined were included in the trial. All patients received platinum-based chemotherapy in combination with either vinorelbine, gemcitabine or pemetrexed according to the physician’s choice. Combinations with taxanes and with anti-EGFR agents were not allowed. Patients with EGFR mutations, early stages patients and patients receiving the adjuvant therapy were excluded from this analysis. All patients had an Eastern Cooperative Oncology Group (ECOG) Performance Status (PS) between 0 and 2 and were at least 18 years of age. Exclusion criteria included any evidence of serious co-morbidities that the investigator judged as a contraindication to the participation in the study, pregnancy and breast feeding. Patients were considered former smokers if they smoked more than 100 cigarettes in their life and they stopped this habit for at least one year at the time of diagnosis as used in most of smoking-habits analyses [22, 23]. All patients who were eligible for participation provided written informed consent with all applicable governing regulations before undergoing any study procedure.

The analysis was planned at the occurrence of 200 events, needed to detect a Hazard Ratio ≥1.60 (mutated KRAS vs. wild-type KRAS) assuming a KRAS mutation frequency of 25% with a statistical power of 80% and two-sided type I error of 5%.

Moreover we evaluated the association between the status of KRAS and clinical and histopathological characteristics by means of Chi-square test.

Results were expressed as HRs and their 95% confidence intervals and P values for two sided hypothesis test were reported.