Different human genes often exhibit different degrees of stability in their DNA methylation levels between tissues, samples or cell types. This may be related to the evolution of human genome. Thus, we compared the evolutionary conservation between two types of genes: genes with stable DNA methylation levels (SM genes) and genes with fluctuant DNA methylation levels (FM genes). For long-term evolutionary characteristics between species, we compared the percentage of the orthologous genes, evolutionary rate dn/ds and protein sequence identity. We found that the SM genes had greater percentages of the orthologous genes, lower dn/ds, and higher protein sequence identities in all the 21 species. These results indicated that the SM genes were more evolutionarily conserved than the FM genes. For short-term evolutionary characteristics among human populations, we compared the single nucleotide polymorphism (SNP) density, and the linkage disequilibrium (LD) degree in HapMap populations and 1000 genomes project populations. We observed that the SM genes had lower SNP densities, and higher degrees of LD in all the 11 HapMap populations and 13 1000 genomes project populations. These results mean that the SM genes had more stable chromosome genetic structures, and were more conserved than the FM genes.

DNA methylation is an epigenetic mechanism [1, 2] that plays important roles in the regulation of gene expression [3, 4], development [5–7], X-chromosome inactivation [8] and genomic imprinting [9, 10].

To make the results more robust, we used a unified platform (GPL13534) and a large sample size (8,676 samples). For each of the 21,231 genes, we employed a fluctuation coefficient, FC, to measure the stability of DNA methylation levels. We then constructed two gene sets, SM genes (4,247 genes) and FM genes (4,247 genes), and compared their differences in evolutionary conservation. 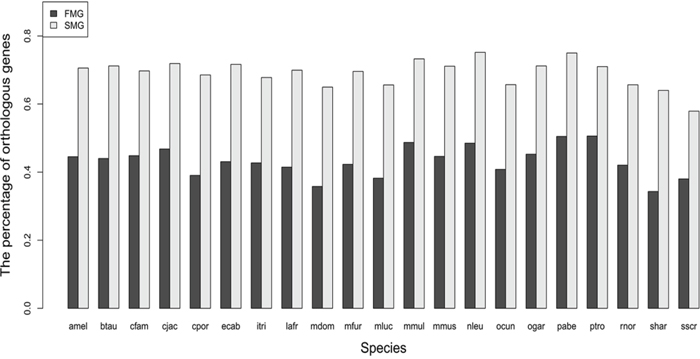 Figure 1: A bar chart comparing the percentage of orthologous genes between SM and FM genes.

SM genes had a lower evolutionary rate than FM genes 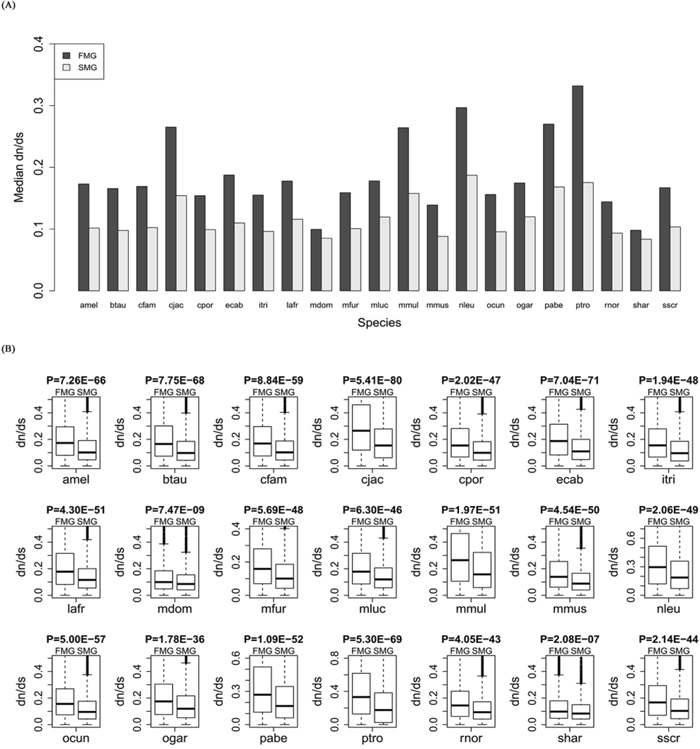 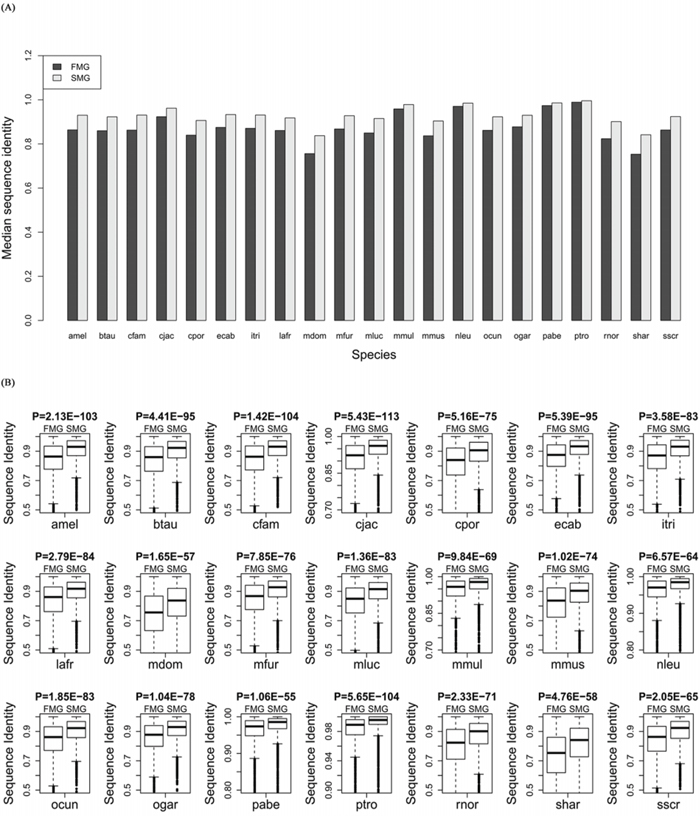 SM genes had a lower SNP density than FM genes

Figure 4: A box plot comparing the SNP density between SM and FM genes. 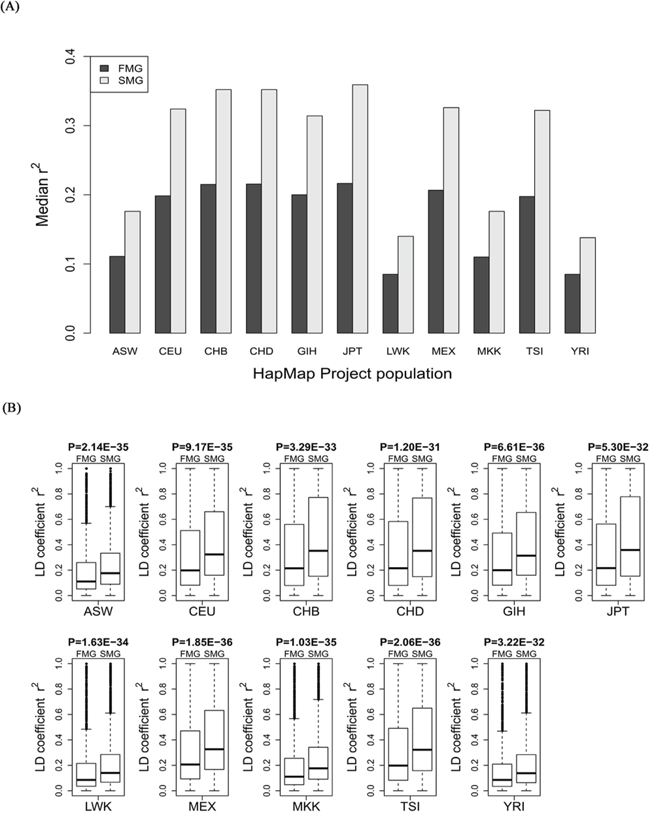 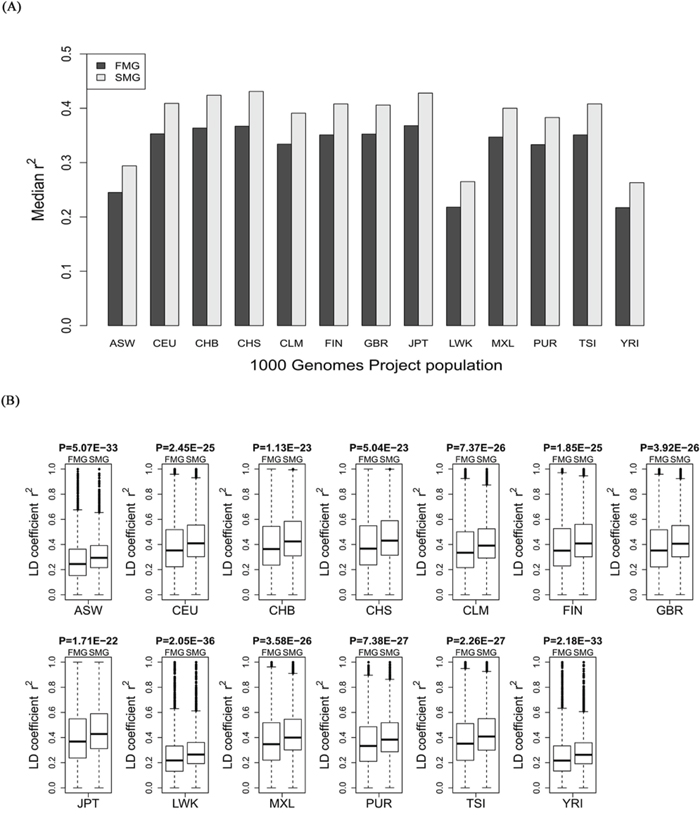 Furthermore, we also compared the functional difference between the SM and FM genes using the GO database. The BP and MF categories were considered. The comparison showed that SM genes were mainly annotated to metabolic processes maintaining the basic survival of the cell, while FM genes were mainly annotated to processes or functions interacting with the environment, such as sensory perception of smell and sensory perception of chemical stimulus. A broad definition for metabolism is the sum of the biochemical processes of living organisms [20]. Metabolism performs a fundamental role in biology and impacts almost all functions of cells [21]. Many studies have demonstrated the relationship between metabolism and the pathogenesis of disease [20, 22, 23], implying that the SM genes involved in metabolic processes play crucial roles in the genome. These genes might have stable genomic structures, and undergo few mutations and recombination events during evolution. Compared with the SM genes, the FM genes showed less evolutionary conservation in both long-term evolutionary features and short-term evolutionary features. They were mainly involved in the response to environmental stimuli, implying that the FM genes exhibit less genomic stability and evolve faster during evolution to allow adaptation to changes in the environment.

As mentioned above, SM genes were defined as genes that have stable DNA methylation levels in all cell types of every tissue under normal or disease conditions. Therefore, all 8676 samples from the 108 series of GPL13534 were put together to form a large data set and used to compare the evolutionary conservation between SM and FM genes. To illustrate whether the disease condition could influence the results, we used a methylation dataset (GSE40699) which included 60 different normal cell lines from ENCODE Project and investigated the relationship between the stability of methylation status and evolutionary conservation. The results still supported the hypothesis that the SM genes had higher evolutionary conservation than FM genes (for details, see Supplementary File Section 11, from Supplementary Figure 11-1 to Supplementary Figure 11-10 and from Supplementary Table 11-1 to Supplementary Table 11-4). The consistency of the results suggested that the disease information did not affect the results. These tests indicated that our results are highly reliable.

The DNA methylation data for human genes were obtained from the NCBI GEO database [24, 25]. We downloaded methylated and unmethylated signal data of all the 108 series from the GPL13534 platform (Illumina HumanMethylation450 BeadChip, including 485,577 probes). All the methylated and unmethylated signal values were normalized [26]. The total number of samples was 8,676. For each sample, we used the β-value to represent the methylation status at a probed location. The β-value was defined as

, where is the methylated signal and is the unmethylated signal at a probed location and 100 is a constant for regularizing the beta value when both methylated and unmethylated probe intensities are low [27]. We then mapped the probes to genes based on the annotation information of the platform. The methylation level of a gene,, was defined as the average -values of probes mapped to the gene . Considering the possible batch effect among different series, we performed adjustment for in different series using the Empirical Bayes (EB) batch correction method [28]. Ultimately, the DNA methylation data set included 21,231 genes and their DNA methylation levels in 8,676 samples.

For a gene , we use the variance of to measure the variations of DNA methylation levels. In this study, the variance of is also called the fluctuation coefficient, FC. The FC of a human gene is defined as:

To calculate the sequence identity, we downloaded the protein sequences between pairwise human-other species orthologous genes from BioMart (http://www.ensembl.org/biomart/martview) [33, 34]. The BLASTP program and the BLOSUM62 matrix [35, 36] were used to align the orthologous sequences. The sequence identity was defined as the percent identity of the match.

The SNP data were downloaded from the NCBI SNP database (http://www.ncbi.nlm.nih.gov/SNP/) [37]. The ID numbers (rs#) and positions of the SNPs were extracted. We then downloaded the location information (start and end position) of SM and FM genes from NCBI (ftp://ftp.ncbi.nlm.nih.gov/genomes/MapView/), and mapped the SNPs to the SM and FM genes based on the chromosomal location. Finally, we calculated the SNP density (the number of SNPs divided by the length of the gene) for each SM or FM gene.

We used public genotype data of common SNPs from the HapMap project [38, 39]. The raw data were downloaded from the NCBI HapMap website (ftp://ftp.ncbi.nih.gov/hapmap). 1,117 unrelated individuals from 11 global populations [40] were extracted from the raw data (Full names and abbreviations of the 11 HapMap populations can be seen in Supplementary Table S5). The SNPs included in this study passed the following quality control (QC) criteria: minor allele frequency (MAF) is greater than 0.01, P-value of the Hardy-Weinberg equilibrium (HWE) test is greater than 0.001, call frequency is greater than 0.75, and the SNP must be detected in all 11 populations. We then mapped the SNPs to the SM and FM genes based on the location information, and calculated the pairwise linkage disequilibrium (LD) coefficient, r2, for all the SNPs in an SM or FM gene region using the Haploview software [41]. The median pairwise r2 in a gene region was calculated and compared between SM and FM genes.

To verify our conclusions, we used another high-quality data set, the 1000 genomes project [42], to compare the degree of LD between SM and FM genes. The raw genotype data were downloaded from the NCBI 1000 genomes website (http://ftp.ncbi.nlm.nih.gov/1000genomes/). 1,063 unrelated individuals from 14 global populations were extracted from the raw dataset (for details, see Supplementary Table S5). Only 13 populations were included in this study, because the IBS population only had 14 samples. The SNP genotype data of the 1000 genomes project were filtered based on the same QC criteria as the HapMap genotype data. Ultimately, the r2 for each of the SM and FM genes were calculated.

To better understand the biological reasons for the observed differences in evolutionary conservation, we compared the Gene Ontology (GO) of the SM and FM genes [43–45]. We used the DAVID software [46] to annotate the SM and FM genes. The biological process (BP) and molecular function (MF) were used to compare the functional differences between SM and SM genes. The cell component (CC) annotation results are also listed in Section 2 and 3 of the Supplementary File.

3. Linn F, Heidmann I, Saedler H, Meyer P. Epigenetic changes in the expression of the maize A1 gene in Petunia hybrida: role of numbers of integrated gene copies and state of methylation. Mol Gen Genet. 1990; 222:329–336.