Accumulating evidence suggests that presence of macrophages in the tumor microenvironment add to the invasive and tumor-promoting hallmarks of cancer cells by secreting angiogenic and growth factors. RKIP is a known metastasis suppressor and interferes with several steps of metastasis. However, the mechanistic underpinnings of its function as a broad metastasis suppressor remain poorly understood. Here, we establish a novel pathway for RKIP regulation of metastasis inhibition through the negative regulation of RANTES/CCL5 thereby limiting tumor macrophage infiltration and inhibition of angiogenesis. Using a combination of loss- and gain-of- function approaches, we show that RKIP hinders breast cancer cell invasion by inhibiting expression of the CC chemokine CCL5 in vitro. We also show that the expression levels of RKIP and CCL5 are inversely correlated among clinical human breast cancer samples. Using a mouse allograft breast cancer transplantation model, we highlight that ectopic expression of RKIP significantly decreases tumor vasculature, macrophage infiltration and lung metastases. Mechanistically, we demonstrate that the inhibition of the CCL5 expression is the cause of the observed effects resulting from RKIP expression. Taken together, our results underscore the significance of RKIP as important negative regulator of tumor microenvironment. 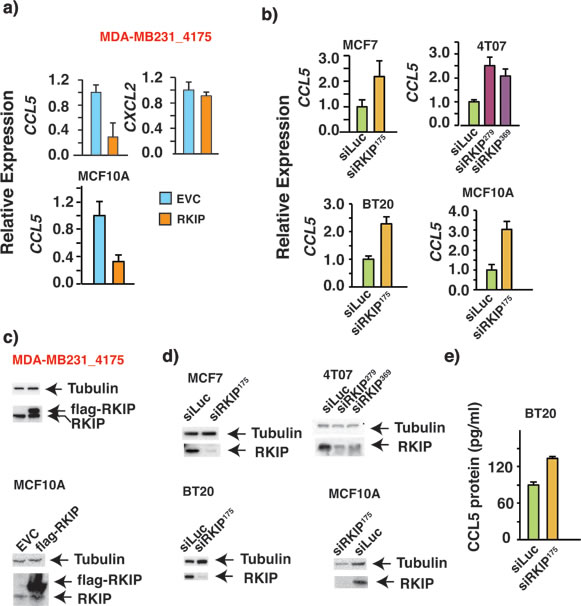 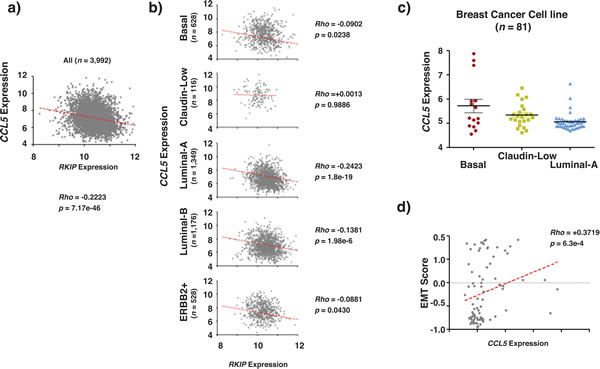 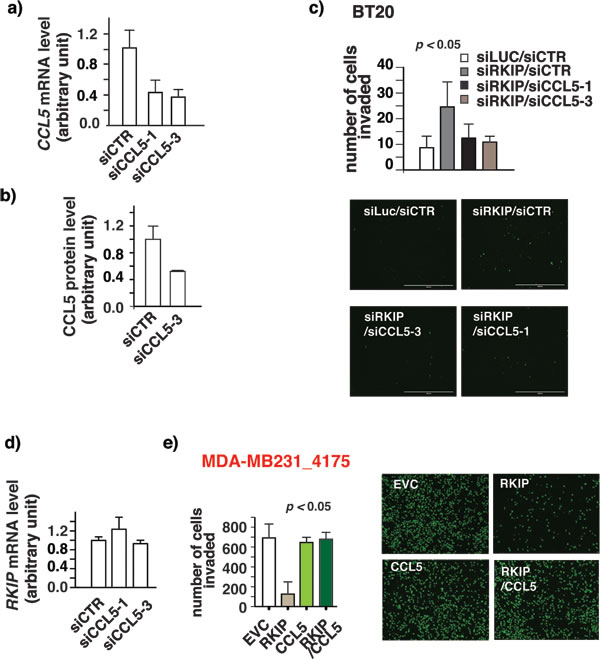 Metastasis is a complex multimodal activity that involves both cancer cells and surrounding non- transformed cells. It has been shown that the recruitment of non-malignant cells into the tumor microenvironment is essential for tumor growth, and cancer metastases [3]. Expression of RKIP is low in cancer metastases and re-expression of RKIP inhibits cancer metastasis [39]. Besides constraining cancer cell invasion, it is possible that RKIP may also inhibit cancer progression and metastasis by interfering with the communication between cancer and non-transformed cells. To investigate this possibility we used orthotopic breast cancer cell transplantation mouse model to assess the impact of restoring RKIP expression on the number of infiltrating endothelial cells and macrophages in primary tumors. We injected RKIP expressing or control vector 4T1 murine breast cancer cells into the mammary fat pads of 7-week-old female Balb/c mice. At 4 weeks after implantation primary tumors were harvested for analyses. We detected the presence of vascular endothelial cells and macrophages in the primary tumors by IHC staining with CD31 and F4/80 antibodies, respectively. Consistent with its tumor suppressive function, RKIP expression reduced significantly the number of infiltrated macrophages and CD31 positive endothelial cells in the primary tumors as detected by IHC staining (Fig. 4c, upper panel and 4d). As a complementary approach, we also quantified the expression of MECA32 (another endothelial marker) and CD31 transcripts in primary tumors by qRT-PCR (Fig. 4c, lower panel). As previously reported [23], at the time of harvest we observed no statistically significant difference in the weight of the primary tumors of mice injected with control and those of mice injected with RKIP 4T1 cells (Fig. 4a). Concurring with a decrease in CCL5 mRNA expression in RKIP expressing breast cancer cells (Fig. 1a), we also observed a decrease in CCL5 protein expression in RKIP-expressing 4T1 tumor (Fig. 4b) by immunohistochemical (IHC) staining with CCL5 specific Ab. 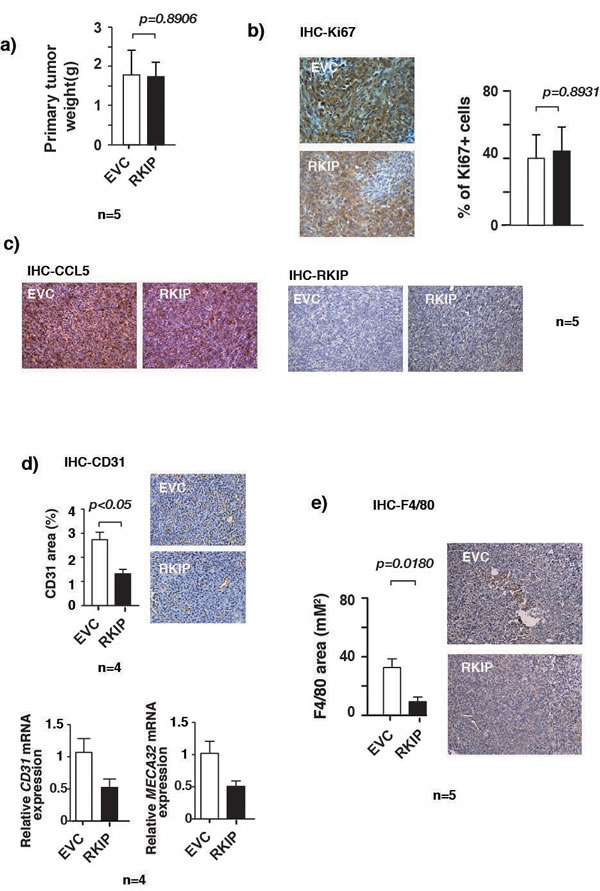 RKIP is a known metastasis suppressor and we observed a decrease in lung metastasis in mice injected with RKIP expressing 4T1 cells (Fig. 5c) as has been previously reported in murine breast cancer orthotopic models [21, 23, 24]. However, the mechanism of how RKIP blocks metastasis of breast cancer cells to the lung has not been rigorously investigated. Lung infiltration with monocytic cells including macrophages has been found to promote breast cancer cells lung tropism in experimental mouse models [40, 41]. Our results therefore raise the possibility that RKIP inhibits metastasis by reducing the macrophages lung infiltration through negative regulation of CCL5 expression. Truly, while expression of RKIP inhibited lung metastasis and macrophage infiltration, co-expression with CCL5 was able to restore macrophages lung infiltration and partially rescued the inhibition of lung colonization mediated by RKIP (Fig. 5c-5d). These results indicate that RKIP suppresses lung colonization by inhibiting the expression of CCL5 thereby blocking macrophage infiltration. 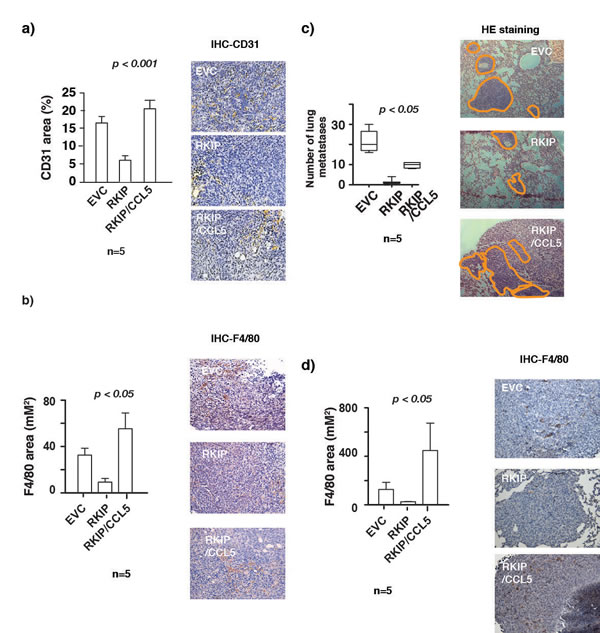 Although stepwise accumulation of mutations in oncogenes and tumor suppressor genes in cancer cells remains the driving force for tumor initiation and progression, tumors require the support of surrounding non-transformed cells to survive, proliferate and progress. This heterotypic interaction of malignant cells with non-malignant cells is essential for tumors to grow, resist cell death, induce angiogenesis, invade tissues and form metastases. The continual interaction and active recruitment of non-malignant cells from adjacent stromal tissues are required for a sustained supportive-system for cancer development [2, 3]. Non-malignant cells found in the milieu in which a tumor develops can be of many types including infiltrating immune cells, cancer-associated fibroblastic cells and angiogenetic vascular cells [3]. Among the immune cells, macrophages are highly represented. Furthermore, there is mounting clinical and experimental evidence that these tumor-infiltrating macrophages play a pivotal role in enhancing tumor progression and subsequent metastasis to distant sites [5]. It was shown previously that RKIP is a significant suppressor of cancer metastasis. Expression of RKIP is low in cancer metastasis. Although primary tumor growth was unaffected, re-expression of RKIP inhibits cancer metastasis [39]. The functional mechanism of how RKIP inhibits metastasis remains undefined. In this study, we observed an inverse correlation of the number of TAM and RKIP expression in both primary tumors and lung metastases in an immunocompetent orthotopic breast cancer mouse model. Our present study therefore suggests that RKIP may inhibit metastasis by interfering with capacity of cancer cells to recruit macrophages.

Once recruited into the primary tumor macrophages secrete growth factors and proteases to facilitate tumor cells invasion. Equally as important is the production of vascular endothelial growth factor and other angiogenetic molecule to stimulate tumor-associated neovasculature growth (angiogenesis) [42]. Previously it was shown that in an orthotopic prostate cancer mouse model that expression of RKIP inhibited tumor angiogenesis [13]. However, the molecular mechanism has not been thoroughly examined. Here, we show that expression of RKIP decreases the number of CD31 positive endothelial cells in breast cancer allografts. Our results therefore suggest, for the first time, the angiogenesis suppressive function of RKIP in breast cancer. Since macrophages are critical for angiogenesis, it is possible that one of the mechanisms by which RKIP inhibits angiogenesis could be by indirectly hindering macrophages infiltration into the tumor.

Cancer is a systemic disease. Primary tumors can impact metastatic outcome by secreting factors that cause accumulation of myeloid cells like macrophages at distant sites [43]. It has been shown experimentally that macrophages are important for setting up preferred sites for metastatic seeding as well as enhancing tumor cells extravasation and subsequently successful colonization at distant site. Here, we show that expression of RKIP decreases both the number of lung metastases and the number of macrophages present in the metastases. Our results therefore suggest that RKIP may inhibit lung metastasis and colonization by limiting the access of macrophages to the lungs.

Taken together, it is possible that RKIP inhibits breast cancer metastasis by interfering with the macrophage recruitment by shutting down CCL5 expression by the cancer cells. Indeed, in our 4T1 breast cancer mouse model, ectopic expression of CCL5 was sufficient to reverse the inhibition of angiogenesis and macrophage recruitment due to RKIP expression. Lastly, CCL5 expression also partially rescued the RKIP-mediated inhibition of lung metastasis. This partial- rescue phenotype suggests that RKIP may inhibit cancer metastasis by impinging on multiple targets.

To summarize, our work has attributed yet another function to RKIP as a metastasis suppressor by regulating the expression of chemokine CCL5. Through the inhibition of CCL5 expression, our study has for the first time discovered the causal role of RKIP in modulating tumor microenvironment by disrupting the communication between cancer cells and macrophages. Since the tumor-macrophage crosstalk potentiates cancer invasion and metastasis, this newly identified pathway involving RKIP may provide new druggable targets for therapeutic intervention.

MDA-MB231 subline 4175 was validated by measuring the expression of the subset of genes from the lung metastasis gene signature associated with these cells as previously reported [26].

4T1 and 4T07 cells were authenticated for their resistance to thioguanine and diaminopurine, respectively [27]. In addition upon orthotopic transplantation into Balb/c mice, 4T1 spontaneously metastasizes to the lung, whereas 4T07 are highly tumorigenic but fail to metastasize at different points in dissemination [28]. MCF7, MCF10A and BT20 cells were validated by measuring the expression of EMT associated genes as previously reported [29].

The polycarbonate membrane (8µΜ pore size) of FluoroBlok cell culture inserts (BD Biosciences) was coated with 95 µL (for MDA-MB-231_4175) or 50 µL(for BT20) of Matrigel (1:26) (BD Biosciences) and was incubated at 37°C. MDA-MB-231_4175 (serum starved for 4 hours) or BT20 cells (serum starved overnight) were plated at 4.5×104 or 5×103 seeding densities respectively on matrigel coated inserts. 700µL of chemo-attractive medium (Dulbecco’s Modified Eagle’s medium, 1% P/S and 10% FBS) was added to the lower chambers (24-well BD Falcon TC companion plate). After 24 or 48 hours of incubation, the insert bottoms were dipped in 1X PBS and stained in Calcein AM reconstituted in DMSO to 1mg/mL- 1µl in 700 µl 1X PBS (BD Biosciences). Digital images were captured on EVOS inverted microscope along with manual cell count and fluorescence reading (485-538nM). Invasion assays were performed at least twice in triplicates. One way ANOVA was performed followed by Bonferron’s multiple comparison test.

Primary tumors were dissected out, weighed and preserved for RNA extraction and histological analyses.

Lungs were dissected out after euthanasia and macro-metastatic nodules were counted. Lungs were paraffin-embedded for histochemical analysis. One way analysis of variance was performed followed by Newman-Keuls multiple comparison test.

Formalin fixed paraffin embedded tumors and lungs were cut into 5µ and stained for CD-31 an angiogenesis marker, CCL5, RKIP, Ki-67 and F4/80 macrophage marker. Briefly, the sections were deparaffinized followed by heat-mediated retrieval at 85°C in a water bath for 45 mins in citrate buffer pH-6.0. The sections were allowed to sit at RT for at least 30 mins. This was followed by blocking of endogenous peroxidase activity in H202-methanol. The sections were then blocked using normal goat serum (Vector labs ABC Kit) followed by incubation in primary antibody at 4°C overnight. Next day, after washing of primary antibody, sections were incubated in anti-mouse biotinylated secondary antibody (Dako) for 30 mins at RT. This was followed by incubation with Avidin-Biotin (VectaStain ABC Kit) complex and chromogenic detection using the DAB-peroxidase kit (VectaStain peroxidase Kit). Brightfield images were taken at 20X and 40X magnification.

The area of F4/80 positive staining in primary tumors was measured using NIS elements software. Percentage areas were then calculated. One way analysis of variance was performed followed by Newman-Keuls multiple comparison test. Quantification of F4/80 staining in lungs was restricted only to lung metastatic nodules. Two to three fields of most lung nodules in an entire section were quantified. For statistical analysis, Kruskal-Wallis test was performed followed by Dunn’s multiple comparison test. For Ki-67 staining quantification, the number of positively stained nuclei and the total number of nuclei per field (total of two random fields per sample) were counted at 40X magnification. Percentage positive nuclei were counted regardless of the staining intensity. Student’s t-test was performed and no significant difference was observed between EVC and RKIP expressing primary tumors.

Epithelial-mesenchymal transition (EMT) score for breast cancer tumor and cell line were computed based on method and signature derived previously [29].

No potential conflicts of interest were disclosed