Hepatocellular carcinoma (HCC) causes more than 500,000 deaths each year worldwide [1]. However, measures aiming at preventing HCC development in these patients are limited [2]. In addition, current therapies for HCC often obtain poor long-term outcome due to drug resistance with elusive mechanisms [3]. These facts prompt us to identify novel molecular mechanisms for hepatocellular carcinoma development and drug resistance.

Endoplasmic reticulum (ER) stress has emerged as a major site of cellular homeostasis regulation, particularly in the unfolded protein response, which plays a major role in cancer and many other diseases [4]. Several drugs that activate ER stress have been approved for preclinical and clinical use. These drugs include sorafenib, eeyarestatin, 17-AAG, radicicol, and MAL3-101 [5]. The contribution of ER stress to HCC has been proposed repeatedly [6, 7], however, high activation of ER stress by sorafenib could induce apoptosis and growth arrest in established or advanced HCC [8, 9]. Similar situation was observed for marine prostanoid, curcumin, and genistein [10–12]. The mechanism by which sorafenib induces ER stress and HCC cell apoptosis is still elusive.

Long non-coding RNAs (lncRNAs) have recently been found to be pervasively transcribed in the human genome. Aberrant expression of several lncRNAs was found to be involved in the carcinogenesis of human HCC [13, 14]. The p53-regulated long noncoding RNA lincRNA-p21 has been proposed to act in trans via several mechanisms ranging from repressing genes in the p53 transcriptional network to regulating mRNA translation and protein stability [15]. The physiological and pathological functions of lincRNA-p21 were identified gradually. For instance, Yang et al. [16] reported lincRNA-p21 as a regulator for the Warburg effect and also implicated lincRNA-p21 as a valuable therapeutic target for cancer. Wu et al. [17] showed that lincRNA-p21 regulated neointima formation, vascular smooth muscle cell proliferation, apoptosis, and atherosclerosis by enhancing p53 activity. LincRNA-p21 function in pluripotency was also been identified [18, 19]. Here in the present work, we identified lincRNA-p21 as a negative regulator for HCC development and drug resistance.

To investigate the potential functions of lincRNA-p21 in human hepatocellular carcinoma (HCC), we firstly tested the expression profile of this lincRNA in normal liver tissues and tissues from HCC. The results showed that lincRNA-p21 level was significantly reduced in tissues from HCC than that from normal liver tissues (Figure 1A). We also tested the expression of other lncRNAs (HULC, H19, MALAT-1, TUC338, and HOTTIP) that are reported in HCC [20–24]. All of these lncRNAs were up-regulated in HCC (Supplementary Figure S1), which was different from lincRNA-p21. Therefore, we focused on lincRNA-p21 in the present work. The expression of lincRNA-p21 in tumor and adjacent tissues was also analyzed. Markedly, lincRNA-p21 level in tumor tissues was lower than that of adjacent tissues (Figure 1B). We also found the low level of lincRNA-p21 in liver cancer cell lines compared to normal human hepatocytes (Figure 1C). Further, we investigated whether lincRNA-p21 was correlated with clinical markers for HCC. We analyzed the serum levels of alpha-fetoprotein (AFP) in normal donors and HCC patients, and found the high levels of AFP in patients with HCC (Figure 1D). Linear regression analysis implicated the significant but negative correlation between serum AFP level and tissue lincRNA-p21 level (Figure 1E). These data indicate the potential participation of lincRNA-p21 in human hepatocellular carcinoma. To further confirm this correlation, we analyzed whether lincRNA-p21 predicted patients’ survival. The results showed that low lincRNA-p21 predicted poor overall and disease-free survival in patients with HCC (Figure 2A and 2B). In addition, we found that low level of lincRNA-p21 was associated with higher tumor grade (p = 0.0166) and stage (p = 0.0023), and vascular invasion (p = 0.0209; Table 1). 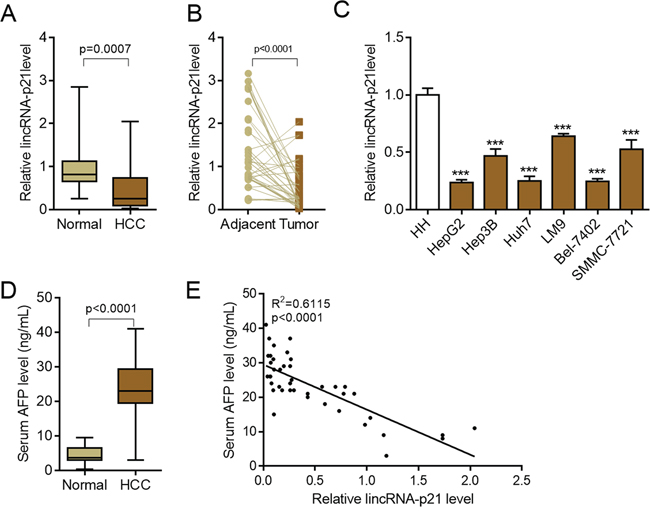 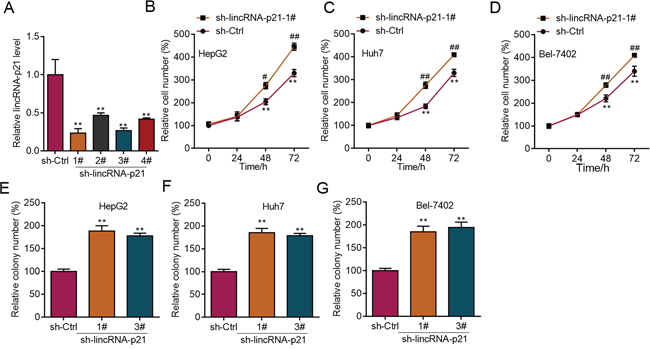 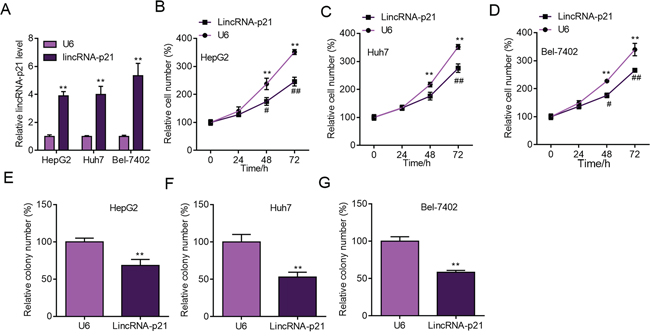 We next studied whether lincRNA-p21 also regulated in vivo growth of liver cancer cells. We performed tumor xenograft experiments and knocked down lincRNA-p21. LincRNA-p21 knockdown did not induce any toxicity in mice. We found that lincRNA-p21 knockdown facilitated the in vivo growth of HepG2 cells (Figure 5A and 5B). In consistence, lincRNA-p21 overexpression inhibited growth of HepG2 cells in vivo (Figure 5C and 5D). These results demonstrated lincRNA-p21 acted as a negative regulator for liver cancer cell growth in vivo. Another question we were interested was whether low lincRNA-p21 contributed to drug resistance. Therefore, we used the clinical drug sorafenib, which was reported to induce apoptosis of liver cancer cells partly through inducing ER stress [8, 25]. Firstly, we found that sorafenib could induce the expression of lincRNA-p21 in vitro and in vivo (Supplementary Figure S4A and S4B). Sorafenib treatment did not induce any toxicity in mice but inhibited in vivo growth of HepG2 cells significantly. However, when lincRNA-p21 was knocked down, sorafenib was unable to repress tumor growth (Figure 5E–5F). These findings implicated that lincRNA-p21 downregulation may contribute to clinical tumor growth and drug resistance. 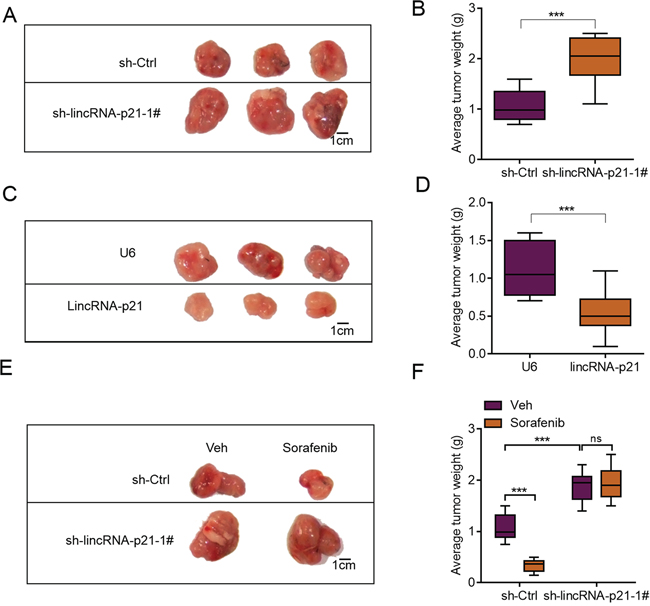 Induction of ER stress is one of the important pathways for clinical drugs to induce liver cancer cell apoptosis and repress carcinoma development [8, 10, 11, 26]. Sorafenib is a small molecule that inhibits tumor-cell proliferation and tumor angiogenesis and increases the rate of apoptosis in a wide range of tumor models. In preclinical experiments, sorafenib has anti-proliferative activity in liver-cancer cell lines, and it reduces tumor angiogenesis and tumor-cell signaling and increases tumor-cell apoptosis in a mouse xenograft model of human HCC [27]. One of the major mechanisms by which sorafenib inhibits liver cancer survival is by inducing ER stress [8, 9]. As we showed the contribution of lincRNA-p21 to sorafenib-induced repression of tumor growth, we next wanted to know whether this contribution depended upon ER stress. We analyzed ER stress markers and found the positive correlation between lincRNA-p21 levels and ER stress markers (IRE1, CHOP, and GRP78) in tissues from HCC (Figure 6A–6C). In HepG2 cells, overexpression of lincRNA-p21 induced expression of IRE1, CHOP and GRP78 (Figure 6D). We also found the upregulation of IRE, CHOP and GRP78 protein level and hyper phosphorylation of eIF2α in HepG2 cells overexpressed with lincRNA-p21 (Figure 6E and Supplementary Figure S5). We also tested the activation of protein kinase RNA-like endoplasmic reticulum kinase (PERK), which is responsible for phosphorylation of initiation factor eIF2α, We found that lincRNA-p21 could up-regulate the phosphorylation level of PERK (Supplementary Figure S6). Finally, we studied the effect of lincRNA-p21 on ER stress in vivo. In consistent with the in vitro findings, lincRNA-p21 overexpression activated ER stress by up-regulating the transcription of ER stress markers (Figure 6F–6G and Supplementary Figure S7). In addition, as reported by previous findings, sorafenib induced ER stress in vivo (Figure 7A–7D) and in liver cancer cell lines (Figure 7E–7G). Interestingly, lincRNA-p21 knockdown blocked sorafenib effects on ER stress both in vivo (Figure 7A–7D and Supplementary Figure S8A) and in vitro (Figure 7E–7G and Supplementary Figure S8B–S8D), indicating that lincRNA-p21 contributes to sorafenib-induced ER stress. 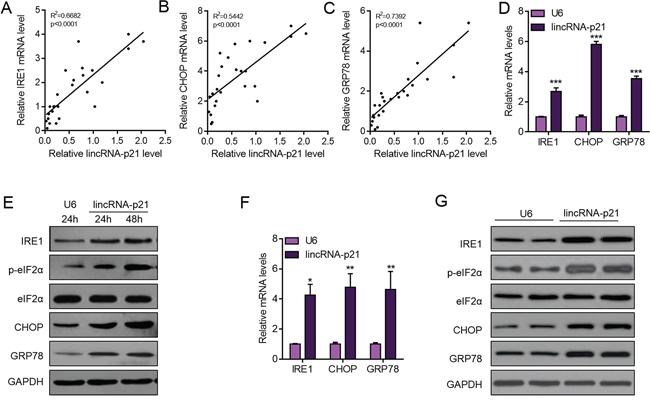 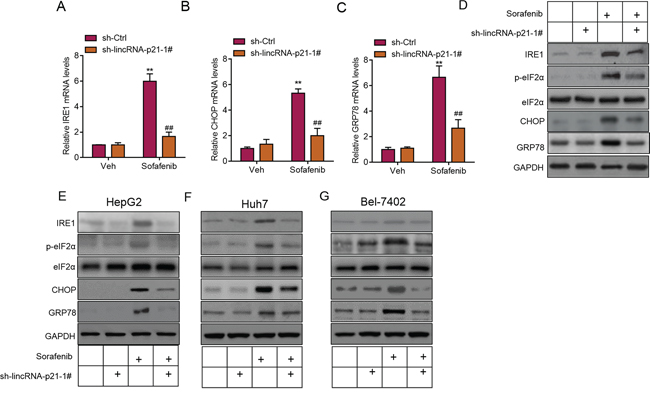 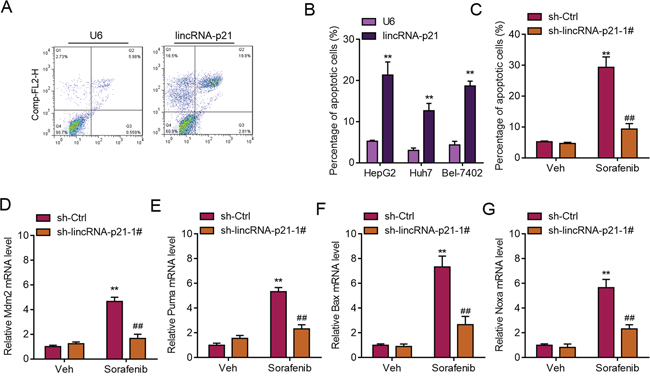 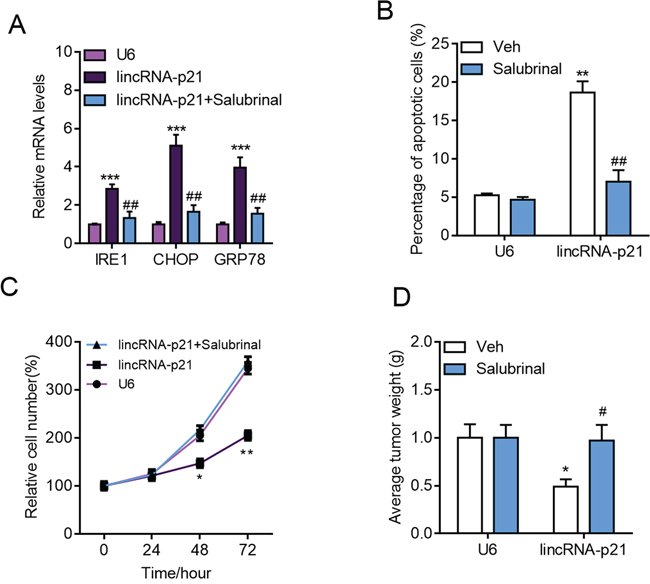 Sorafenib is a clinical drug for HCC [25]. Previous reports indicated that sorafenib induce apoptosis and growth arrest of HCC cells partly through activating ER stress [5–9]. However, the underlying mechanism remains largely unexplored. We identified here lincRNA-p21 contributed to sorafenib-induced ER stress and apoptosis. Knockdown of lincRNA-p21 blocked sorafenib effects on ER stress, apoptosis and growth inhibition, indicating lincRNA-p21 low expression is one of the reasons for drug resistance in HCC and high level of lincRNA-p21 may predict favorable outcome post sorafenib therapy. We also found that sorafenib induced expression of p53 downstream genes, Puma, Mdm2, Noxa and Bax, which was blocked by lincRNA-p21 knockdown. Therefore, lincRNA-p21 may also target p53 to induce apoptosis as previously reported [17]. Previous reports show that lincRNA-p21 increases following X-ray treatment, and enforced expression of the lincRNA enhances the sensitivity of radiotherapy for CRC by promoting cell apoptosis [32]. These findings implicate that up-regulation of lincRNA-p21 may contribute to drug treatment and radiotherapy.

70 cases of hepatocellular carcinoma (HCC) patients with full case history between May 2001 and October 2007 were enrolled in the present study. Fresh HCC or adjacent normal liver tissues were obtained and stored at −80°C before use. The patients were recruited at Eastern Hepatobiliary Surgery Hospital, Second Military Medical University (Shanghai, China). All HCC samples were histopathologically re-evaluated independently by two pathologists before further analysis. Healthy liver samples were obtained from donor livers used for transplantation that were pathologically evaluated before transplantation. Further patient information is included in Table 1. A written form of informed consent was obtained from all patients and donors before any treatment and experiments. The study was approved by the Clinical Research Ethics Committee of Second Military Medical University. The methods were carried out in accordance with the approved guidelines.

Total RNA was extracted from cells or fresh tissues with TRIzol (Invitrogen # 10296010). cDNA was synthesized from two μg of total RNA with One-Step RT-PCR Kit (TaKaRa # RR086A). Then, q-PCR was performed with the SYBR Green (TaKaRa # DRR420A) on an ABI-7500 RT-PCR system (Applied Biosystems). The primers were listed in Supplemental Table S1.

The liver cancer cell lines HepG2, Huh7, Hep3B, LM9, Bel-7402 and SMMC-7721 were cultured as described previously [33]. Normal human hepatocytes were isolated from specimens obtained from patients undergoing hepatic resections for the therapy of hepatic tumors after informed consent and according to the rules of the ethics committee of the Second Military Medical University. The liver cancer cells and normal human hepatocytes were cultured in high glucose-containing Dulbecco’s modified Eagle’s medium (DMEM) supplemented with 10% FBS, 100 units/ml penicillin and 100 μg/ml streptomycin.

Cell proliferation ability of the liver cancer cells was monitored by CCK-8 Cell Proliferation/Viability Assay Kit (Sigma # 96992) in according to the guidelines.

For liver cancer cell colony formation assay, liver cancer cells were suspended in 1.5 ml complete medium supplemented with 0.45% low melting point agarose (Invitrogen # 16520-050). The cells were placed in 35 mm tissue culture plates containing 1.5 ml complete medium and agarose (0.75%) on the bottom layer. The cells were cultured for 14 days. Cell colonies were stained with 0.005% crystal violet and analyzed using a microscope. The colony number in each well was calculated.

Equal numbers of HepG2 cells stably expressing either control or lincRNA-p21 knockdown, U6 or lincRNA-p21 overexpression vectors (5 × 106) in 100 μl of a 1:1 mixture of culture medium and growth factor–reduced Matrigel were implanted subcutaneously into the forelegs of 4- to 5-week-old male BALB/c athymic nu/nu mice (Vital River). When the tumors reached approximately 7–10 mm in diameter, they were prepared to form a brei and then injected subcutaneously into nude mice. Tumor growth was monitored by tumor weight at the end of study (Four weeks for in vivo tumor growth). The study was approved by the Animal Research Ethics Committee of Second Military Medical University. The methods were carried out in accordance with the approved guidelines.

Dihydroethidium (DHE, Invitrogen #D11347) was used for detecting ROS generation in cardiomyocytes as per the manufacturer’s protocol.

Values were expressed as Mean ± SEM. Statistical differences between two groups were determined using unpaired or paired Student’s t test. For more than two groups, one-way or two-way ANOVA analysis were applied. The correlation of lincRNA-p21 levels with patients’ clinicopathological variables was analyzed by the χ2 test or Fisher’s exact test. The Kaplan-Meier method was used to estimate overall and disease-free survival. Survival differences according to lincRNA-p21 expression were analyzed by the log-rank test. Linear regression analysis was performed to analyze the relation between lincRNA-p21 level and AFP serum level as well as ER stress markers in patients with HCC. P values of less than 0.05 were considered statistically significant.