The telomerase protein is constitutively activated in malignant cells from many patients with cancer, including the chronic myeloid leukemia (CML), but whether telomerase is essential for the pathogenesis of this disease is not known. Here, we used telomerase deficient mice to determine the requirement for telomerase in CML induced by BCR-ABL in mouse models of CML. Loss of one telomerase allele or complete deletion of telomerase prevented the development of leukemia induced by BCR-ABL. However, BCR-ABL was expressed and active in telomerase heterozygous and null leukemic hematopoietic stem cells. These results demonstrate that telomerase is essential for oncogene-induced reprogramming of hematopoietic stem cells in CML development and validate telomerase and the genes it regulates as targets for therapy in CML.

Activation of telomerase is associated with malignancy in many human cancers [1]. Telomerase inhibition was proposed as a potential cancer therapy when telomere shortening was first described in human cells [2]. Telomerase-deficient mice have been generated via deletion of the mouse terc gene encoding the RNA component of telomerase [3]. Terc-/- mice show phenotypic abnormalities only after successive generations of terc-/- intrecrosses [4, 5]. Strong evidence has accumulated that short telomeres limit tumor growth. Crosses of terc-/- mice to tumor prone models demonstrate that the short telomere response significantly limits tumor formation [6]. However, in contrast to these findings in differentiated tumor cells, the contribution of telomerase to the biology of cancer stem cells (CSC) has not been previously investigated.

Recently we have shown that the restricted expression of the BCR-ABL oncogene, linked to chronic myeloid leukemia (CML) disease, to the hematopoietic stem cell compartment is capable of generating a full-blown tumour with all its differentiated cellular components, showing a hands-off role for BCR-ABL in regulating CML formation [7-12]. BCR-ABL oncogene inactivation could not change this tumor reprogramming fate at the CSC level, in agreement with the common occurrence of tumor relapse by which human CML evolves to escape BCR-ABL pharmacological inactivation [13-22]. Thus, it seems important to know how to eradicate and/or prevent this BCR-ABLp210-induced reprogramming of stem cells [10-12]. In order to identify the genes that are associated with BCR-ABLp210-induced reprogramming of stem cells we performed a supervised analysis of the transcriptional profiles of CSCs purified from Sca1-BCR-ABLp210 mice versus hematopoietic stem cells from control mice. The data identified that terc gene was expressed in CSCs in the Sca1-BCR-ABLp210 mice, although it was not differentially regulated in CSCs versus control hematopoietic stem cells [7, 8]. Now, to assess the functional importance of telomerase and telomere status in this Sca1-BCR-ABLp210 model, the terc gene knockout was established in these Sca1-BCR-ABLp210 mice, and tumor phenotype assessed in the first generation of telomerase heterozygous and homozygous mice. Remarkably, the data provide evidence that telomerase activity is essential for BCR-ABLp210-induced reprogramming of stem cells. Overall, our results demostrate that telomerase plays a critical role in the pathogenesis of BCR-ABL-CML, and validate telomerase and the genes it regulates as targets for therapy in CML. 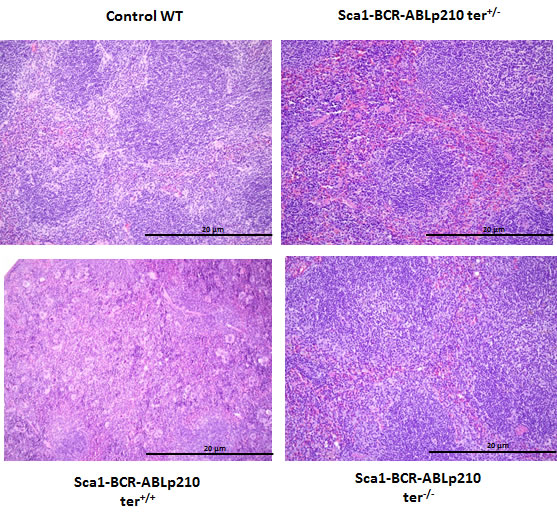 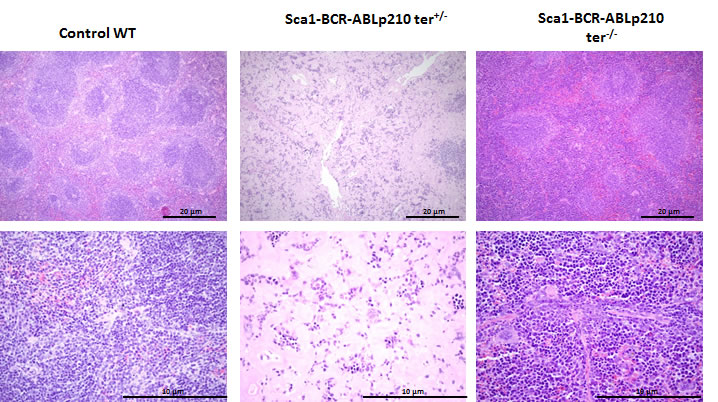 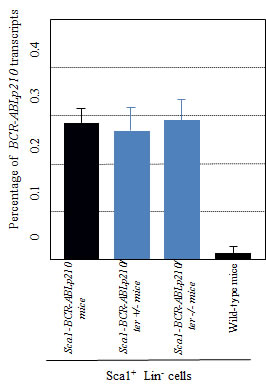 Overall, our work demonstrates for the first time that telomerase is required for the generation and maintenance of LSCs. These results demonstrate that telomerase is essential for oncogene-induced reprogramming of hematopoietic stem cells in CML development and validate telomerase and the genes it regulates as targets for therapy in CML. This evidence that telomerase inactivation could modify LSC indicates that the reduction/absence of telomerase does not have an instructive role in the genesis of tumor CML cells, but just a permissive one, preventing cells with damage from being successfully terminally reprogrammed. This indicates that the driving force of the reprogramming process is the BCR-ABL oncogene itself. However, targeting of BCR-ABL does not affect CML stem cells. The search for ways to eliminate leukemic stem cells has became a priority due to their resistance to kinase inhibitors and the likely role they play in disease recurrence [29]. A number of strategies have yielded promissing results. Our results add the telomerase pathway as a potential therapeutic target whose inactivation can lead to CML stem cell eradication.

All animal work has been conducted according to relevant national and international guidelines and it has been approved by the Bioethics Subcommittee of Consejo Superior de Investigaciones Cientificas (CSIC).

All mice included in this study were subjected to standard necropsy. All major organs were examined under the dissecting microscope, and samples of each organ were processed into paraffin, sectioned and examined histologically. All tissue samples were taken by the pathologist from homogenous and viable portions of the resected sample and fixed within 2-5 min. of excision. Hematoxylin- and eosin-stained sections of each tissue were reviewed by a single pathologist (T.F.). For comparative studies, age-matched mice were used.

Analysis and monitoring of disease

Nucleated cells were obtained from total bone marrow (flushing from the long bones), peripheral blood, thymus, liver and spleen. In order to prepare cells for flow cytometry, contaminating red blood cells were lyzed with RCLB lysis buffer and the remaining cells were then washed in PBS with 2% FCS. After staining, all cells were washed once in PBS with 2% FCS containing 2 mg/mL propidium iodide (PI) to allow dead cells to be excluded from both analyses and sorting procedures. Monoclonal antibodies were obtained from Pharmingen and included: Lineage markers (CD45R/B220, for B lineage staining; CD4, CD8 and CD3 for T cell lineage; CD11b and Gr1 for myeloid lineage and TER119 for erythroid lineage) and Sca1 (E13-161.7) for stem cells. Single cell suspensions from the different tissue samples obtained by routine techniques were incubated first with purified anti-mouse CD32/CD16 (Pharmingen) prior to the addition of other antibodies, to block binding via Fc receptors and then with an appropriate dilution of the different antibodies at room temperature or 4 oC, respectively. The samples and the data were analysed in a FACSCalibur using CellQuest software (Becton Dickinson). Specific fluorescence of FITC and PE excited at 488 nm (0.4 W) and 633 nm (30 mW), respectively, as well as known forward and orthogonal light scattering properties of mouse cells were used to establish gates. For each analysis a total of at least 5.000 viable (PI-) cells were assessed.

For cell sorter separation, bone marrow cells were incubated with anti-Sca1 and anti-lineage markers antibodies (CD3, CD4, CD8, B220, TER119, Gr1, and Mac1). Sca1+Lin- and Sca1-Lin+ cells were isolated and highly purified from the BM of leukemic primary mice or control mice by fluorescence-activated cell sorting (FACS) (FACSVANTAGE; Becton Dickinson). c-kit (CD117) was not used for stem cell isolation as previous studies of human and mouse specimens have described down-regulation of c-kit as a feature of leukemia stem cells [7]. Sorted cells were then re-analyzed for purity with the FACS and determined to be over 98%.

12. Gonzalez-Herrero I, Vicente-Duenas C, Orfao A, Flores T, Jimenez R, Cobaleda C,Sanchez-Garcia I. Bcl2 is not required for the development and maintenance of leukemia stem cells in mice. Carcinogenesis. 2010; 31: 1292-1297.