T-cell acute lymphoblastic leukemia (T-ALL) represents expansion of cells arrested at specific stages of thymic development with the underlying genetic abnormality often determining the stage of maturation arrest. Although their outcome has been improved with current therapy, survival rates remain only around 50% at 5 years and patients may therefore benefit from specific targeted therapy. Interleukin receptor associated kinase 1 (IRAK1) is a ubiquitously expressed serine/threonine kinase that mediates signaling downstream to Toll-like (TLR) and Interleukin-1 Receptors (IL1R). Our data demonstrated that IRAK1 is overexpressed in all subtypes of T-ALL, compared to normal human thymic subpopulations, and is functional in T-ALL cell lines. Genetic knock-down of IRAK1 led to apoptosis, cell cycle disruption, diminished proliferation and reversal of corticosteroid resistance in T-ALL cell lines. However, pharmacological inhibition of IRAK1 using a small molecule inhibitor (IRAK1/4-Inh) only partially reproduced the results of the genetic knock-down. Altogether, our data suggest that IRAK1 is a candidate therapeutic target in T-ALL and highlight the requirement of next generation IRAK1 inhibitors.

T-cell acute lymphoblastic leukemia (T-ALL) is an aggressive hematological malignancy resulting from the transformation of T-cell progenitors at various stages of development. They represent 10% of pediatric and 25% of adult ALL. Despite improvement in therapeutic protocols that cure nearly 80% children and 50% adults, relapse is common and the prognosis of relapsed T-ALL remains extremely poor [1, 2]. T-ALL oncogenesis results from chromosomal rearrangements, somatic genetic mutations, aberrant oncogene expression and impairment of multiple signaling pathways involving kinases [3–7]. Interestingly, the use of several kinase inhibitors has been shown to be effective in T-ALL [8–10]. Therefore, efficient evaluation of their potential therapeutic impact requires their use in subsets of patients that are most likely to benefit.

We recently investigated the transcriptional expression of receptor and receptor-associated kinases in T-ALL by Taqman low density array (TLDA) [8]. We showed the overexpression of several kinases as compared to their normal thymic counterparts, demonstrating that exploration of the receptor kinome defines a rational strategy for testing kinase inhibition in T-ALL. These data showed that IRAK1 was strongly overexpressed in all categories of T-ALL so we sought to further explore the potential role of IRAK1 as a therapeutic target in T-ALL.

IRAK1 is overexpressed and functional in T-ALL

Transcriptional analysis of the expression level of 65 receptor and receptor-associated kinases in 32 T-ALL (test series) and normal thymic subsets (cell-sorting described in Supplementary Figure S1) showed that IRAK1 was the most highly expressed kinase in all categories of T-ALL, regardless of the immunogenetic stage of arrest or underlying recurrent oncogenetic abnormalities, including Notch1 pathway mutations (Figure 1). We used qPCR to validate the transcriptional pattern of IRAK1 in sorted normal thymic subsets, in T-ALL cell lines, and in a large series of 177 independent (validation series) primary human T-ALL. This confirmed IRAK1 overexpression in T-ALL and cell lines as compared to normal thymus (p < 0.01, Figure 2A). IRAK1 transcript levels were slightly higher in most mature TCRab lineage thymic subpopulations as compared to immature and mature TCRgd subsets, without statistical significance (Figure 2A). No difference was observed between mature and immature T-ALL subtypes (Figure 2A) or oncogenic subtypes (not shown) suggesting ubiquitous oncogenic IRAK-1 deregulation in T-ALL, irrespective of stage of maturation arrest and/or oncogenic deregulation.

Taken together, these data suggest that IRAK1 is robustly expressed in T-ALL at both transcriptional and protein levels, and remains functional in at least a significant subset of cases.

To test whether IRAK1 is required for T-ALL survival, we transduced short hairpin RNAs (shRNA) targeting IRAK1 into T-ALL cell lines. Two independent shRNA (543 and 544) significantly downregulated IRAK1 protein expression in several cell lines (representative data for Jurkat, Figure 3A). Depletion of IRAK1 with both shRNA induced a dramatic decrease in T-cell proliferation (Figure 3B) and increase in apoptosis and cell cycle disruption by increasing the G0/G1 and decreasing the S phase cells in both HPB-ALL and Jurkat cell-lines (Figure 3C and 3D).

Knock-down of IRAK1 reverses resistance to corticosteroids in Jurkat

Resistance to corticosteroids remains one of the most challenging issues in ALL therapy. As previously reported [19], the Jurkat cell line is resistant to corticosteroids (Figure 4A). To assess whether knock-down of IRAK1 could reverse this resistance, we tested the effects of dexamethasone in Jurkat after genetic IRAK1 inactivation. Dexamethasone induced apoptosis was significantly increased in cells transduced with IRAK1 shRNA as compared to control cells (Figure 4A). A similar effect was observed on cell proliferation (Figure 4B). In order to confirm these data, we then performed assays with a broader range of dexamethasone doses tested on a p-IRAK positive (Jurkat) and a p-IRAK negative (HPB-ALL) T-ALL cell line with simultaneous genetic knockdown of IRAK-1 using shRNA544 (Figure 4C). These data demonstrated that the corticosteroid response reversion is specifically observed in p-IRAK1 positive cells (Figure 4C). Altogether these data support that knockdown of IRAK1 could sensitize corticosteroid resistant p-IRAK1 positive T-ALL to dexamethasone therapy.

Pharmacological inhibition only partially reproduces the effects of genetic knock-down 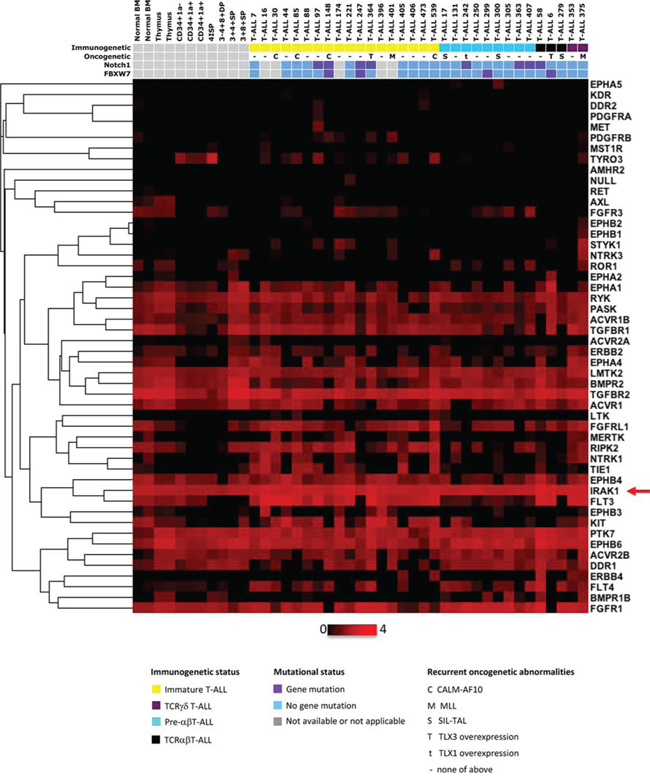 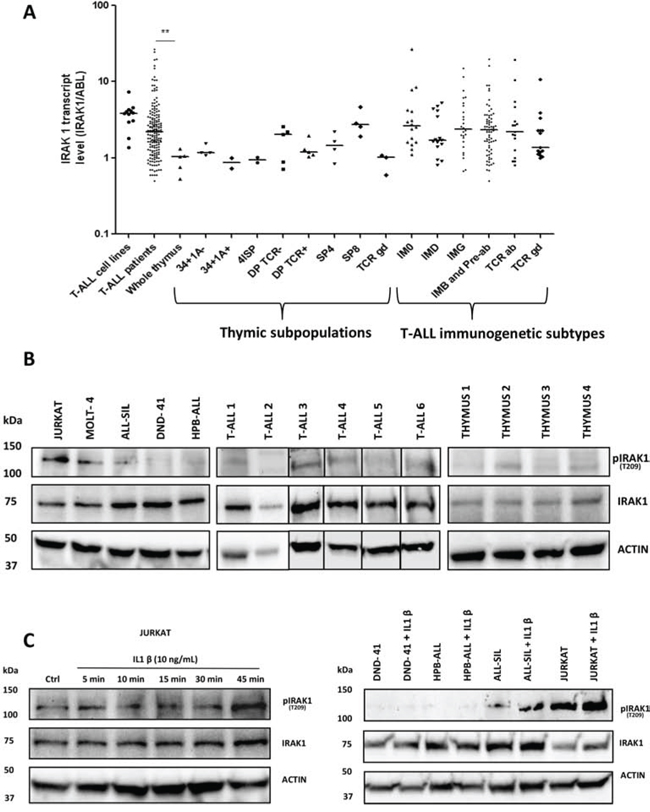 Improving prognosis remains a therapeutic challenge in T-ALL. Kinases have recently been shown to be druggable targets in T-ALL, particularly in Early T-precursor (ETP)-ALL, a very immature subtype with myeloid features which is associated with a high risk of induction failure or relapse and a poor outcome [22]. Indeed, kinases play a key role in signaling pathways downstream to cytokine receptors that are important in T-ALL and central to ETP ALL oncogenesis [3]. We have now identified IRAK1 as a novel candidate kinase for targeted therapy in T-ALL, including ETP-ALL. IRAK1/4 inhibitor was originally developed for autoimmune and inflammatory diseases [20], and was effective in-vitro and in-vivo in hematological malignancies (MDS, AML, DLBCL) that overactivate the IRAK1 pathway [13, 18], albeit to a lesser extent. These data in T-ALL underline the requirement of new and more efficient IRAK1 inhibitor for clinical use in leukemia therapeutics. 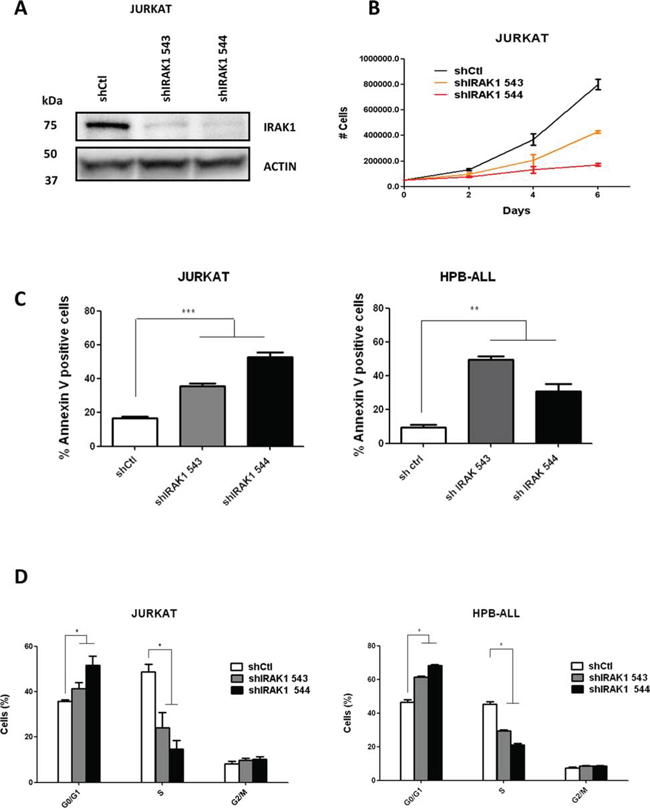 Figure 3: Genetic knock-down of IRAK1 induces apoptosis and disrupts cell cycle. A. Genetic knockdown of IRAK1 was confirmed by western blotting in Jurkat cells expressing a control or shIRAK1-expressing lentiviral vector B. Viable cell growth was assayed by trypan blue exclusion for up to 6 days. Data are represented as mean +/− SEM. C. Annexin V/IP staining was assessed in Jurkat and HPB-ALL cells by flow cytometry after transduction with shRNA-expressing lentiviral vectors. D. Cell cycle analysis of Jurkat and HPB-ALL cells after transduction was performed with Edu/7-AAD incorporation. 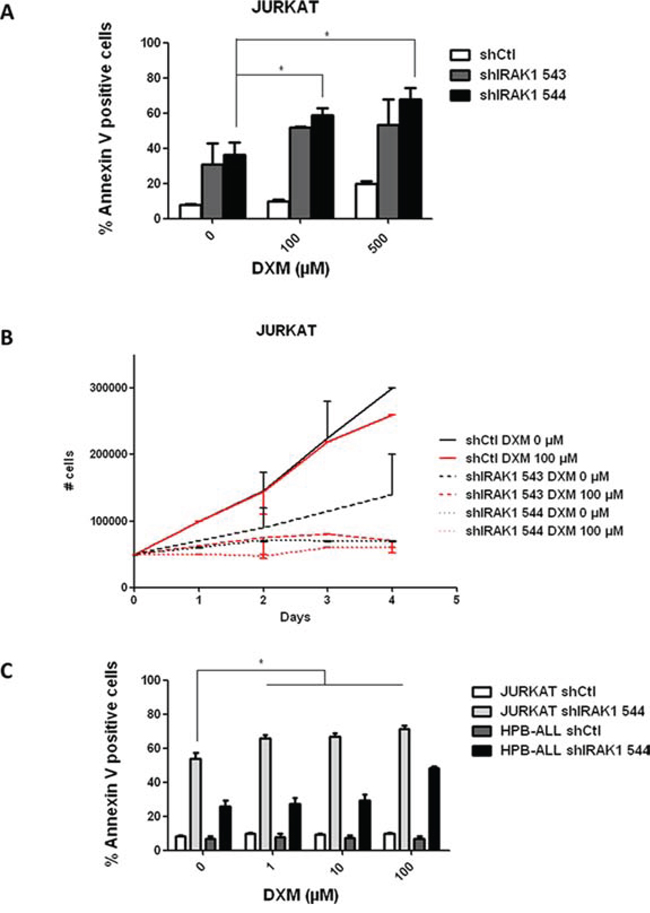 Our data support that inhibition of IRAK1 activity result in corticoresistance reversion, only in the context of constitutive activation of IRAK1. The unexpected observation that pharmacological inhibition of IRAK1 could not result in comparable cytotoxicity to genetic knock-down of IRAK1 raises the possibility that the cellular oncogenic effects of IRAK1 may not be entirely mediated through its kinase domain. There is precedent for this in alternative disease models, such as the FLT3 receptor which displays both kinase-dependent and independent effects. One mechanism accounting for primary resistance to pharmacological FLT3 inhibition appears to be related to the maintenance of kinase-independent effects of FLT3 upon TKD exposure, with active recruitment of signaling molecules on Grb2 and downstream overexpression of MCL1, thereby maintaining oncogenic FLT3 activity [23]. Interestingly, previous studies showed that kinase-dead IRAK1 mutants maintain IL1-mediated NF-kB and MAPK activation, suggesting that the kinase domain of IRAK1 may be dispensable for the activation of some physiological downstream signaling mediators [24–26]. Whether the present discrepancy between genetic and pharmacological inhibition results from kinase-independent signaling remains to be addressed. However, the exact sequence of molecular events following IRAK1 activation is not fully deciphered and kinase-related and kinase-independent effects remain controversial [27]. 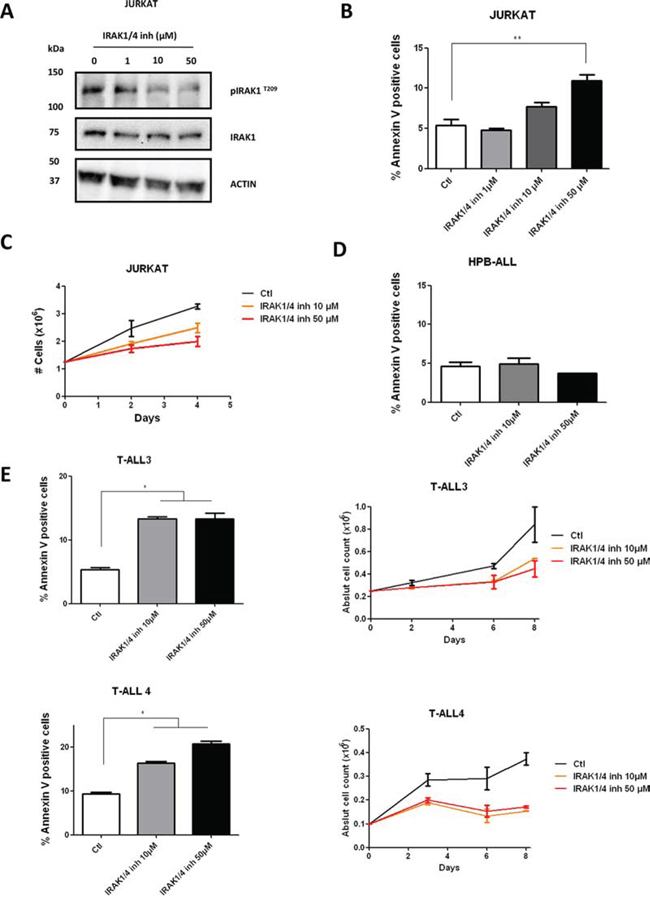 We identified deregulation of IRAK1 in all T-ALL subsets but the molecular mechanism(s) of overexpression and constitutive activation in hematological malignancies has not been addressed so far. It may result from post-transcriptional deregulation by miRNA such as miR-146, which targets IRAK1 mRNA [28]. The role of IRAK1 in normal thymopoïesis and in T-ALL pathogenesis should be further investigated. It has been shown that the NF-κB pathway is activated and can be targeted in T-ALL [29]. In this context, targeting IRAK1 may represent a new approach to inhibit the NF-κB pathway preferentially in leukemic compared to normal lymphoid precursors.

In conclusion, our study identifies IRAK1 as a potential novel target in T-ALL, particularly in cortico-resistant T-ALL and ETP-ALL but optimal therapeutic intervention will require development of next generation IRAK1 inhibitors and their preliminary evaluation in in-vivo tests and mouse xenograft models of T-ALL.

Diagnostic peripheral blood or bone marrow samples from 177 adults with T-ALL were analyzed after informed consent was obtained at diagnosis according to the Declaration of Helsinki. Patients were included in the GRAALL03/05 trials, both were registered at ClinicalTrials.gov (GRAALL-2003, NCT00222027; GRAALL-2005, NCT00327678).

Normal thymic samples were obtained from children undergoing cardiac surgery at the Necker-Enfants Malades Hospital, with informed consent from the parents.

IRAK1 transcript expression was quantified by real-time quantitative PCR in an unselected series of 177 T-ALLs with available cDNA.

Knock-down of IRAK1 with shRNA lentivirus

Hierarchical classifications were performed using the Pearson’s correlation coefficient as a similarity metric with an average linkage algorithm as described [30].

This work was supported by grants to Necker laboratory from the “Association Laurette Fugain”, the “Comité Départemental de la Ligue Contre le Cancer” and the Institut National du Cancer. Samples were collected and processed by the AP-HP “Direction de Recherche Clinique” Tumor Bank at Necker-Enfants Malades.