MicroRNA (miRNA) is endogenous, short, non-coding RNA with approximately 22 nucleotides in length, which negatively regulates gene expression at transcriptional and post-transcriptional levels [5]. Some miRNAs are reported to be involved in pancreatic tumor development and angiogenesis [6]. As an anti-angiogenesis agent, rh-endostatin inhibits proliferation, migration, micro-vessels formation of human umbilical vein endothelial cells (HUVECs) [7–9]. Whether rh-endostatin can directly suppress pancreatic cancer cells and how miRNAs is involved remain unclear. Here we addressed these questions and revealed miRNA-19a as a potential oncotarget (therapeutic target).

Both gemcitabine and rh-endostatin inhibited proliferation of ASPC-1 cells (Supplementary Figure 1) and altered the miRNA profiles (Figure 1A, 1B). Totally 28 miRNAs altered by rh-endostatin and 42 miRNAs altered by gemcitabine respectively were determined by high-throughput sequencing analysis and miR-19a was down-regulated significantly in both groups, confirmed also by fluorescence quantitative RT-PCR in ASPC-1 cells (Figure 1C) and the other two pancreatic cancer cell lines (Panc-1 and Capan-2 cells, Figure 1D). The effect of abraxane on miR-19a was also explored since gemcitabine plus abraxane is a standard treatment option for pancreatic cancer patients. Abraxane inhibited cell proliferation and suppressed miR-19a expression in pancreatic cancer cell lines (Supplementary Figure 2). 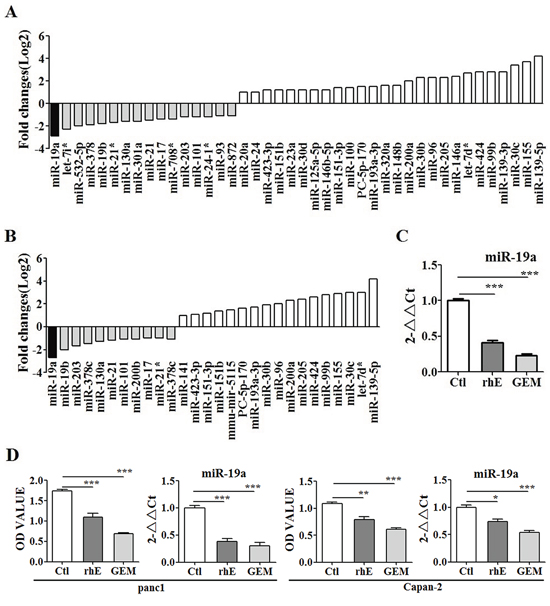 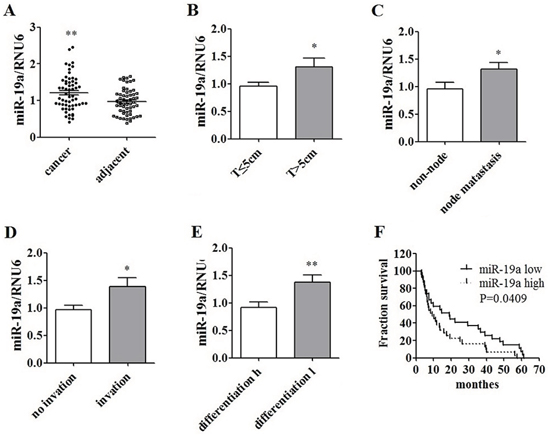 RHOB is a direct target of miR-19a

The functional targets prediction was performed using targetscan, pictar, miRDB and microRNA.org. RHOB was among the predicted potential targets (Supplementary Figure 5A) and miR-19a was one of the miRNAs that may target RHOB (Supplementary Figure 5B). The binding set of RHOB by miR-19a was also predicted (Supplementary Figure 5C) and the mutant set of RHOB by miR-19a was thus designed (Supplementary Figure 5D). RHOB mRNA and protein expression levels were evaluated by RT-PCR (Supplementary Table 1) and western-blot separately after transfection with mimic and inhibitor of miR-19a in ASPC-1 cells. The mRNA (Figure 4A) and protein (Figure 4B) of RHOB were both decreased in mimic group, in contrast, they were increased in inhibitor group compared with that in NC cells. Luciferase reporter assays were performed to further determine that RHOB is a direct target of miR-19a (Figure 4C). Increased expression of miR-19a significantly affected luciferase activity when miR-19a was co-transfected with PGL3-RHOB-WT. Conversely, the luciferase activity of a mutant reporter (PGL3-RHOB-MUT) was unaffected (p < 0.01). In addition, miR-19a silencing led to a significant increase of luciferase activity in PGL3-RHOB-WT cells compared with that in the anti-NC groups (p < 0.01). Furthermore, RHOB levels were inversely correlated with miR-19a levels both in pancreatic cancer tissues (Figure 4D) and in adjacent tissues (Figure 4E). These results suggest that RHOB is a direct target of miR-19a. 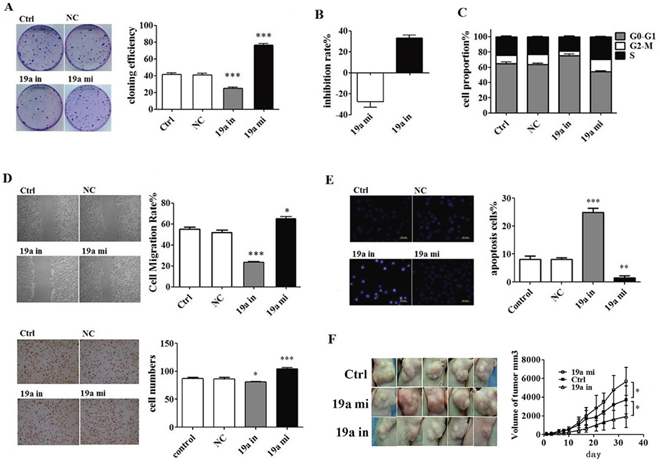 To further understand the molecular mechanism for the regulation of miR-19a, the transcription factors of miR-19a were predicted using TRANSFAC® 7.0 in gene regulation (http://www.gene-regulation.com/pub/databases.html) and SP1 was found to be one of the most possible transcription factors. SP1 vector and siRNA plasmid (Supplementary Table 2) were constructed to increase and repress SP1 expression respectively in ASPC-1 cells (Supplementary Figure 7). Up-regulation of SP1 in ASPC-1 cells with SP1 vector plasmid significantly increased miR-19a expression levels and down-regulated SP1 with SP1 siRNA inhibited miR-19a expression (Figure 6A). Totally 22 possible binding motifs for SP1 in miR-19a promoter region were predicted, Chromatin immune-precipitation (ChIP) assay was performed for further test but only four of them were confirmed (Figure 6B, Supplementary Table 3), which were also supported by Electrophoretic Mobility Shift Assay (EMSA) (Figure 6C). SP1 was found overexpressed in the same 12 human pancreatic cancer samples used for RHOB test (Figure 6D, Supplementary Figure 2C). MiR-19a expression was positively correlated with SP1 at protein levels in human pancreatic cancer (Figure 6E) and adjacent tissues (Figure 6F). These suggested that SP1 is one of the upstream transcription factors of miR-19a that directly promote miR-19a transcription. 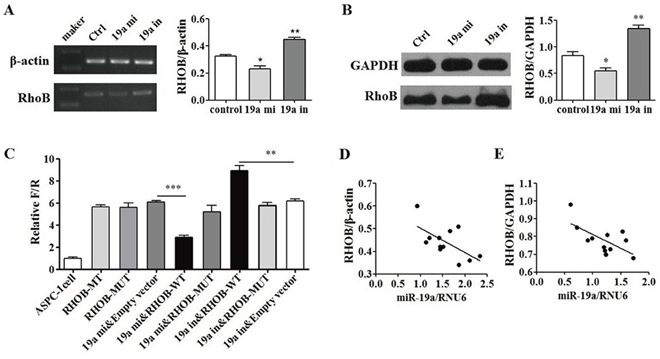 Figure 4: RHOB was a direct target of miR-19a. A. RHOB mRNA and B. protein levels were altered by miR-19a levels inversely. Increased miR-19a expressed in ASPC-1cells with miR-19a mimic down-regulated RHOB mRNA and protein expression levels while down-regulated miR-19a with miR-19a inhibitor up-regulated the RHOB mRNA and protein expression levels in ASPC-1 cells. C. RHOB was determined a direct target of miR-19a by luciferase reporter assay. Increased expression of miR-19a significantly affected luciferase activity when miR-19a was co-transfected with PGL3-RHOB-WT. Conversely, the luciferase activity of a mutant reporter (PGL3-RHOB-MUT) was unaffected (p < 0.001). MiR-19a silencing led to a significant increase of luciferase activity in PGL3-RHOB-WT cells compared with that in the anti-NC groups (p < 0.01). D. RHOB levels were inversely related with miR-19a levels in pancreatic cancer tissues (p < 0.05) and E. in adjacent tissues (p < 0.05).

High-throughput sequencing analysis revealed 28 and 42 significantly altered miRNAs after treatment with rh-endostatin and gemcitabine. Among them, miR-19a was down-regulated more significantly than the others, including miR-21, an onco-miRNA well-known in pancreatic cancer [10–14].

As a member of miR-17–92 cluster, miR-19a is expressed in many human cancers but shows contradictory properties: namely, it can promote [16, 17] or inhibit [18, 19] cancer progression in different type of neoplasms. Recent studies have suggested that high levels of miR-19a were associated with poor prognosis [20, 21] and multidrug resistance [22, 23]. We confirmed that miR-19a was over-expressed in pancreatic cancer tissues, and was correlated with poor differentiation and prognosis, promoted cancer cell proliferation, facilitated cells migration and invasion, as well as inhibited apoptosis. These data suggested that miR-19a was an onco-miRNA and promoted progression in pancreatic cancer. 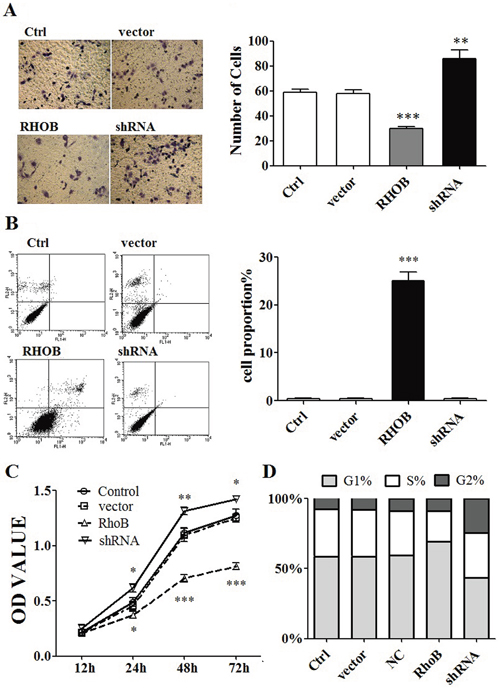 Bioinformatics search for potential target genes of miR-19a was performed by using 4 common databases, and RHOB was identified as a possible target. The assay of Dual Luciferase Reporter Gene activity confirmed that miR-19a could directly target the 3′UTR of RHOB. Our study added RHOB as one more target of miR-19a, which has been attested to target PTEN [13], SOCS1 [16], CUL5 [17], TNF-α [24] and TIMP-2 [25]. PTEN could inhibit pancreatic cancer progression through suppressing PI3K/AKT and NF-κB signal pathways [26, 27] and was targeted by different miRNAs in pancreatic cancer [28, 29]. RHOB is a tumor suppressor gene in many type of cancers [30, 31], however, RHOB, not like PTEN, is known much less in pancreatic cancer. Restoration of suppressed RHOB is a critical step for tumor regression in various types of cancers [32–37] and would be a crucial target in cancer treatment [38, 39]. Our study has demonstrated that RHOB is down-regulated in human pancreatic cancers and suppresses progression of pancreatic cancer by inhibiting proliferation, migration and invasion, as well as by inducing apoptosis. Importantly, the promoting effect of miR-19a on pancreatic cancer progression depends on inhibition of RHOB. 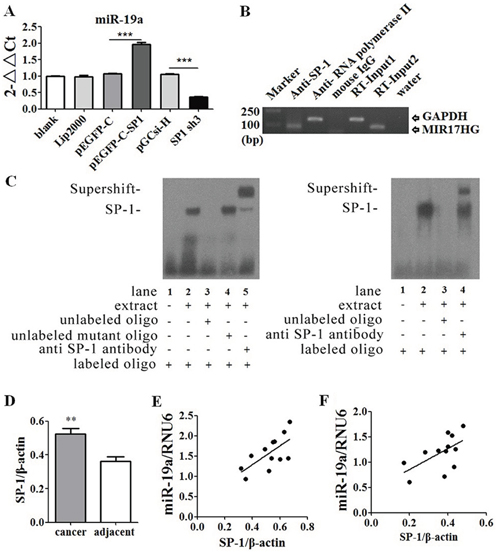 Interestingly, we also found that a high dose of rh-endostatin, an anti-angiogenesis agent, can inhibit cancer cell proliferation directly by alteration of the miRNA profiles. Rh-endostatin is now widely used for cancer treatment in Asian countries and the daily dose of rh-endostatin ranged from 3.75 to 300 mg/m2 is well tolerated by most of the patients and shows no significant toxicity [48–52]. The plasma concentration was about 1.35 ug/ml to 108 ug/ml for an adult with body surface area of 1.8 m2 and blood volume of 5 liters. Yet, the IC50 value of rh-endostatin on ASPC-1 cell was 1129.9 ug/ml at 48 h after treatment, an extremely high concentration. Actually, inhibition of proliferation was observed at the concentration of 250 ug/ml. Rh-endostatin inhibited miR-19a expression through down-regulating Sp1 and thus enhanced RHOB expression both in mRNA and protein levels to inhibit ASPC-1 cells proliferation, migration and invasion. Therefore it simultaneously induced cells apoptosis, and decreased S phase cells. However, it is hard for rh-endostatin to gain the effect under reported concentration in human unless it changes the dosage forms such as controlled release or liposome encapsulated formulations to meet that challenge. 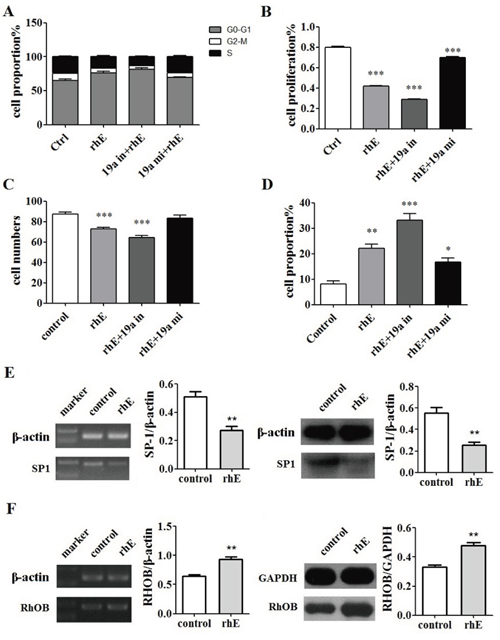 In conclusion, Sp1 driven up-regulation of miR-19a promotes cancer by targeting RHOB. These findings suggest the potential of miR-19a as a therapeutic target for pancreatic cancer.

The formalin fixed paraffin-embedded pancreatic cancer tissues specimens (tumor tissue and paired adjacent tissue) from 58 patients that underwent operation from 2004 to 2007 in Shengjing hospital, China Medical University, were collected for miRNA detection. All the 58 patients had exactly survival time. In addition, 12 fresh pancreatic cancer tissues and the corresponding normal tissues were collected immediately after resection from 2011 to 2012 in Shengjing hospital. The samples were immediately frozen at −80°C in liquid nitrogen for protein detection.

All of the patients provided written informed consent, and approval for the study was received from the Ethics Committee of China Medical University. Verification of the specimens was performed by a pathologist.

The 3′ UTR segment of the RHOB gene was amplified by PCR and was inserted into the vector. A mutant construct in three miR-19a binding sites of RHOB 3′UTR region was also generated using quick change site-directed mutagenesis kit (Agilent, Roseville City, CA). ASPC-1 cells were harvested for dual luciferase assay (Promega) according to manufacturer’s instructions at 48 hours after co-transfection of RHOB 3′UTR or mutRHOB 3′UTR plasmid with miR-19a lentivirus vector accomplished by using Lipofectamine2000 (Invitrogen). The experiments were performed independently in triplicates.

The assay for chromatin immune-precipitation (ChIP) was performed using EZ-ChIP™ Chromatin immune-precipitation kit (Millipore) according to the manufacturer’s instructions. DNA pulled down by anti-SP1 antibodies was amplified by PCR. DNA from these samples was subjected to PCR analyses with primers sets for miR-19a promoter, followed by sequencing.

Nuclear proteins were extracted with a nuclear protein extraction kit in accordance with the manufacturer’s instructions. The protein concentration was determined using a BCA kit. The oligonucleotide probe was 5′-TATTCGATCGGGGCGGGGCGAGC-3′ while the mutant probe was 5′-ATTGGCGGGCGGGATGGGA GGTCGGAAG-3′ and labeled with biotin. Binding reactions were performed according to the non-radioactive EMSA kit. The specificity of the DNA and protein complex was confirmed by cold competition with a 50-fold excess of unlabeled SP-1 oligonucleotides. Binding reaction, gel electrophoresis, membrane transfer and immobilization, DNA binding, chemiluminescent reaction and imaging were performed sequentially.

Female Balb/c nude mice, 4 weeks old and weighing ~20 g were obtained from Animal Facility of China Medical University (Shenyang, P. R. China). All animals were maintained under SPF conditions and were fed sterilized water and murine chow ad libitum. All experiments were carried out according to the Guidelines of the Laboratory Protocol of Animal Handling, China Medical University.

Tumor model was established by implanting ASPC-1 cells with or without miRNA-19a mimics or inhibitors transfected (1 × 107 cells) s.c. in the right axilla skin of mice. The in vivo study was performed on days 7–10 after tumor inoculation, when tumors were 4–5 mm in diameter and had no necrotic region. The tumor volume and body weight of the mice were measured every 2–3 days during the period of investigation. Values for the tumor volume (V) were determined by measuring the longitudinal cross section (L) and the transverse section (W) and then applying the formula V = (L × W2)/2.

The authors thank Dr. Fengping Shan and Yuan Yuan for useful discussion and critical reading of the article, and Xike Zhu for laboratory support. We should also like to acknowledge the financial support from the Outstanding Scientific Fund of Shengjing Hospital (grant No 201210).