Obesity has been suggested to be a risk factor for PCa [9, 10], and pre-adipocytes are capable of proliferating and differentiating into an adipose deposit to play a key role in the progression of obesity [11], and influence various tumor progressions [12–15]. However, results from those studies indicated that pre-adipocytes had controversial effects on tumor progression including simulating breast cancer and uterine leiomyoma growth [12, 14], yet inhibiting breast cancer proliferation and metastasis [13, 15]. The potential impact of pre-adipocytes on PCa progression, however, remains unclear.

Micro-RNAs (miRNAs), a new class of small RNAs, were found to be able to influence the tumor progression via modulating both mRNA stability and the mRNA translation ability into protein [16, 17]. The newly identified microRNA, miR-301a, is associated with breast cancer and gastric cancer progression [18, 19].

We also assayed the recruited pre-adipocytes impacts on AR downstream metastasis-related target genes including the TGF-β1 and MMP-9, which are negatively regulated by AR [4]. As shown in Fig. 3A-B, the recruitment of pre-adipocytes to PCa cells also increased TGF-β1, p-Smad3 and MMP-9 expression at both mRNA and protein levels in C4-2 and CWR22Rv1 cells. Similar results were also obtained when we replaced human primary pre-adipocytes with mouse 3T3-L1 pre-adipocyte cell line at the mRNA level (Supplementary Fig. S4).

We then applied similar interruption approaches with the inhibitor of TGF-β type I receptor (SB-431542) and MMP-9 specific inhibitor to suppress the AR/TGF-β1/Smad/MMP9 signals, and results revealed that both of the inhibitors could partially reverse the pre-adipocyte-enhanced cell invasion in both C4-2 and CWR22Rv1 cells (Fig. 3E-F). 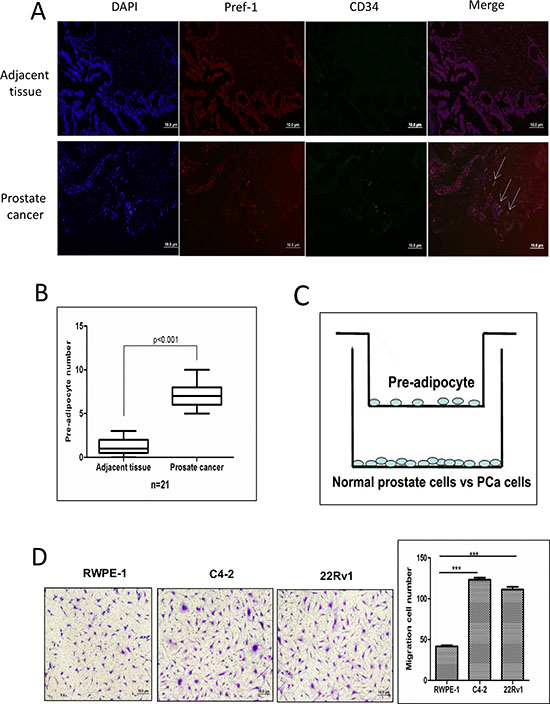 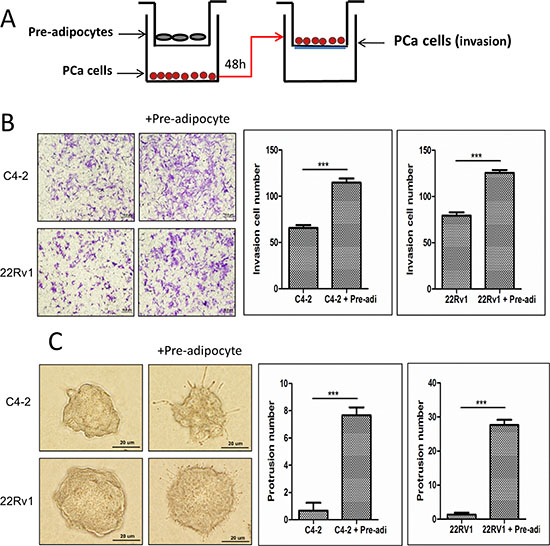 Together, results from Fig. 3A-F suggest that the recruitment of pre-adipocytes to PCa could enhance the PCa cell invasion via modulation of the AR/TGF-β1/Smad/MMP9 signals in PCa cells.

To dissect the mechanism how recruited pre-adipocytes could suppress the PCa AR expression, we focused on those reported miRNAs that were able to modulate the AR expression. We screened some of these miRNAs with the TargetScan programs to search for miRNAs that target evolutionary conserved sequences in the 3′UTR of the AR, and we found the expression of miRNA-301a was increased in both PCa cell lines C4-2 and CWR22Rv1 after co-culture with pre-adipocytes (Fig. 4A-B, Supplementary Fig. S5).

We then applied the interruption approach using miRNA-301a inhibitor treated PCa cells and results revealed that it could partially reverse pre-adipocytes capacity to promote PCa invasion (Fig. 4C), and importantly, addition of miRNA-301a to the PCa cells also show the similar modulation of the AR/TGF-β1/Smad/MMP-9 signals as pre-adipocytes co-cultured with PCa cells (Fig. 4D). 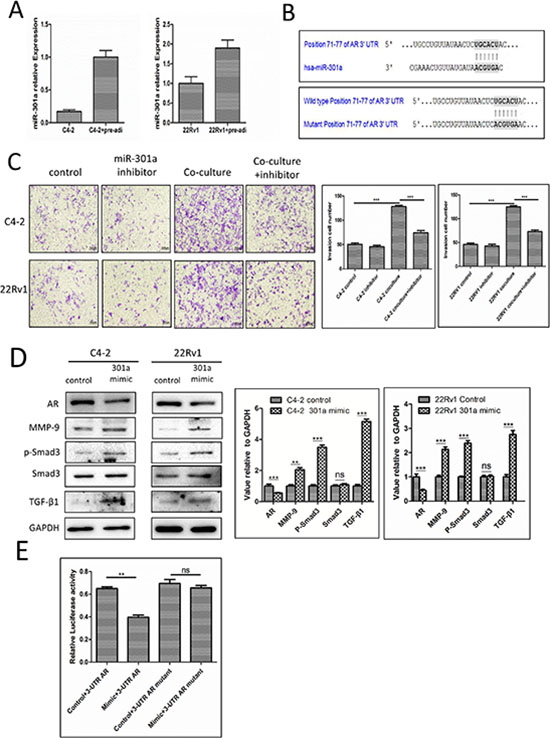 Together, results from Figure 4A-E suggest that recruited pre-adipocytes may function through modulation of miRNA-301a to suppress AR to promote the PCa cell invasion in C4-2 and CWR22Rv1 cells.

To demonstrate all above in vitro cell lines results in the in vivo animal models, we then orthotopically xenografted PCa cells into the anterior prostates (AP) of mice using CWR22Rv1 cells stably transfected with pCDNA-luciferase to monitor the PCa progression with IVIS Imaging system [8]. After xenografting 1 × 106 PCa CWR22Rv1-luc cells with or without mixed 1 × 105 human immortalized pre-adipocytes for six weeks, we found (from IVIS image) metastatic foci, marked by arrows (Fig. 5A), in 4 out of 5 mice with co-implanted PCa and pre-adipocyte cells. In contrast, no metastatic foci were found in mice with PCa CWR22Rv1-luc cells (Fig. 5A-B). These results from IVIS image were further confirmed showing identified metastatic foci in the diaphragm and H&E staining after mice were sacrificed (Fig. 5C).

More than 30% of adults in the United States are obese [22]. Obesity has been linked to several types of cancer, including postmenopausal breast and colon cancers [23]. Several large studies also indicated that increased BMI was associated with increased risk of PCa [24, 25].

Pre-adipocytes are capable of proliferating and differentiating into an adipose deposit [11]. Stimulation of the proliferation of these cells may therefore result principally in an increase in adipocyte numbers leading to obesity. Interestingly, pre-adipocyte roles in tumor progression still remain controversial [13–15], and their roles in PCa progression also remain unclear. Here we found the recruitment of pre-adipocytes by PCa cells could further enhance PCa cell invasion, which might represent the first such finding.

Here we linked the miR-301a as an upstream molecule that modulates AR expression via targeting the 3′UTR of AR to inhibit its translation. Early studies indicated that miR-301a might function as a tumor promoter to alter the progression of many tumors, including breast cancer, pancreatic cancer, hepatocellular carcinoma, gastric cancer and colorectal cancer [18, 19, 29–32]. Mechanism dissection indicated that the miR301a promoted breast cancer proliferation and metastasis via targeting FOXF2, BBC3, PTEN, and COL2A1 [18], as well as down-regulated NF-kB-repressing factor and elevated NF-kB activation in human pancreatic adenocarcinoma [29]. Our finding that infiltrating pre-adipocytes could induce miR-301a to promote PCa metastasis via down-regulating AR, represents another new mechanism for miR-301a to alter the tumor progression.

Further mechanism dissection also found AR could alter the TGFβ-1 and its downstream genes, Smad3 and MMP-9 signals to influence the PCa cell invasion. Down-regulation of AR could increase TGF-β1 expression via transcriptional regulation, which has been reported previously [33]. Early studies indicated that TGF-β1 signaling is mediated through two types of transmembrane serine/threonine kinase receptors [34], and the activated TGF-β receptors might then interact with an adaptor protein SARA (Smad anchor for receptor activation) [35], which propagates signals to the intracellular signaling mediators Smad2 and Smad3 [36]. Following association with Smad4, the Smad complexes then translocate to the nuclei, where they activate specific target genes including MMP-9 through cooperative interactions with its DNA and other DNA-binding proteins to control tumor progression [4, 37].

In summary, our results conclude that infiltrating pre-adipocytes could promote PCa metastasis via modulation of the miR-301a/AR/TGF-β1/Smad/MMP9 signaling (Fig. 6), which might explain the link of potential obesity influences on the PCa progression. Future studies using small molecules to target this newly identified signaling may provide us a new potential therapeutic approach to better battle PCa metastasis. 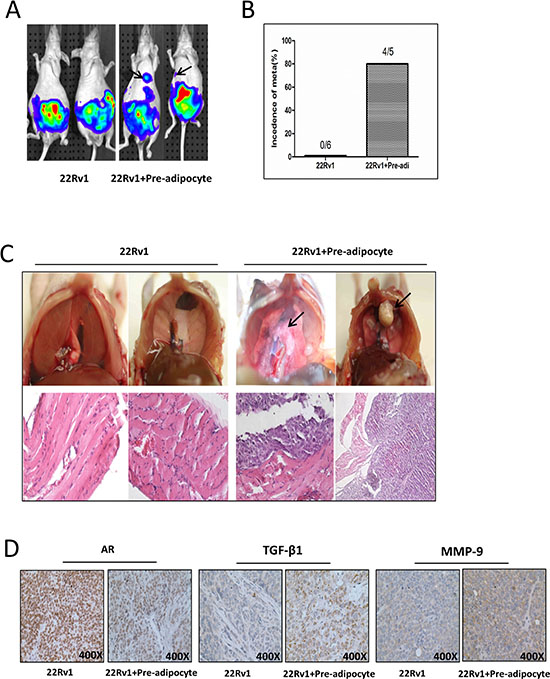 Figure 5: Pre-adipocytes promote PCa invasion using in vivo orthotopic PCa model. A. Orthotopic-implantation of human immortalized pre-adipocytes together with PCa promotes PCa invasion cells. The CWR22Rv1 (22Rv1) cells were transfected with pCDNA-luciferase. 22Rv1-luc cells (1 × 106) were mixed with or without pre-adipocytes (1 × 105) and orthotopically implanted into the AP of nude mice. After 6 weeks implantation, the PCa growth was monitored by IVIS images. Arrows show the metastatic foci. B. Quantification data for tumor metastases in mice. C. Image illustrates metastasized tumors in the diaphragm. The top panels show the tumor mass on diaphragm, and the bottom panels are the H&E staining to confirm the tumor mass is cancer. Arrows show the metastatic foci. D. IHC staining for AR, TGF-β1 and MMP-9 in orthotopic mice tumor tissues. 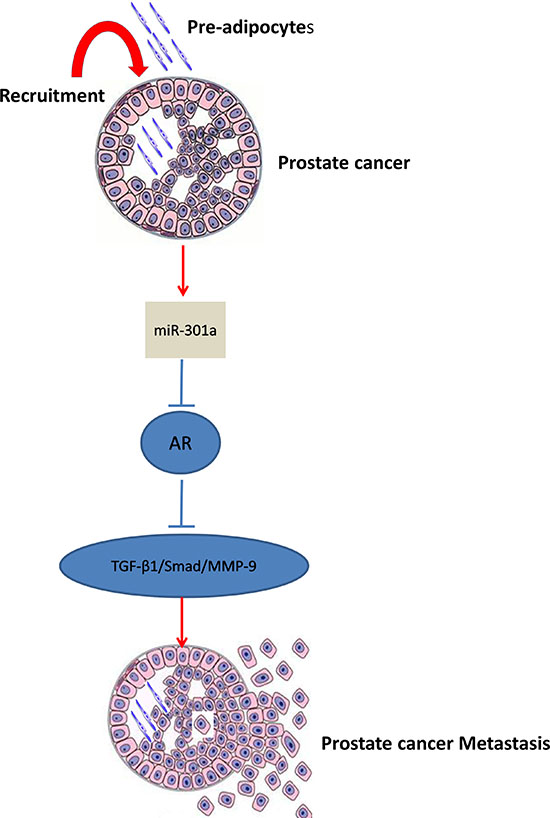 The tumor samples from prostate tumors in situ were fixed in 4% neutral buffered para-formaldehyde and embedded in paraffin. Prostate sections were deparaffinized in xylene solution and rehydrated using gradient ethanol concentrations. Sections were antigen retrieved and washed, blocked in PBS containing 5% BSA for 1 hr at room temperature in a humidified chamber. Sections were washed again and incubated with Pref-1 antibody (mouse) and CD34 (Rabbit) overnight at 4°C. Sections were washed with PBS and incubated with Invitrogen Alexa Fluor 488 goat anti-mouse IgG antibody (1:500) and Alexa Fluor 594 goat anti-rabbit IgG antibody (1:500) for 1 hr in the dark at room temperature. Slides were washed with PBS, stained with DAPI for 5 min, added with Thermal mountant permafluor and sealed with cover glasses. Sections were observed under fluorescence microscope and images were captured.

Pre-adipocytes migration was detected using 24-well transwell assays. Briefly, PCa cells were placed in the lower chambers of 24-well transwells. Pre-adipocytes (5 × 104 cells/well) were then seeded in the upper chambers. The upper and lower chambers were separated by an 8 μm polycarbonate membrane. The chambers were incubated for 24 hours at 37°C, then washed, fixed with cold methanol, and stained with 0.1% crystal violet. Cell migration was measured by counting the number of cells attached to the lower surface of the membrane. Each PCa cell line was tested in triplicate. The results were expressed as the mean of the number of migrating cells.

Thaw Matrigel on ice and add 40 μl to each well of 8-well glass chamber slides (at 50 μl/cm2) and spread the Matrigel evenly, place the slides in the cell culture incubator and allow the Matrigel to solidify (takes 15–20 min). Plate 1 × 104 C4-2 and CWR22Rv1 cells after co-culture with pre-adipocytes into each well with media containing 5% Matrigel and 10 ng/ml EGF. Change media once every 3 days with assay media containing 2.5% Matrigel and 5.0 ng/ml EGF. PCa cells take about 7 days to form protrusion structures. 10 different fields under 200x microscope were chosen randomly to count the number of protrusions on cells in each field.

Cells were lysed in RIPA buffer and proteins (20 μg) were separated on 8–10% SDS/PAGE gel and then transferred onto PVDF membranes (Millipore, Billerica, MA). After blocking membranes, they were incubated with appropriate dilutions (1:1000) of specific primary antibodies, the blots were incubated with HRP-conjugated secondary antibodies and visualized using ECL system (Thermo Fisher Scientific, Rochester, NY).

Male 6- to 8-week old nude mice were used. CWR22Rv1 cells were engineered to express luciferase reporter gene (PCDNA3.0-luciferase) by stable transfection and the positive stable clones were selected and expanded in culture. 6 mice were injected with 1 × 106 PCa luciferase expressing cells, as a mixture with Matrigel, 1:1 and another 5 mice were co-injected with 1 × 106 PCa cells and 1 × 105 immortalized human pre-adipocytes to anterior prostate (AP). Metastasis in live mice was monitored using a Fluorescent Imager (IVIS Spectrum, Caliper Life Sciences, Hopkinton, MA) at different time points (3, 4, 5, and 6 wks after injection) following intraperitoneal injection of Luciferin. After a final monitoring with the Imager, mice were sacrificed and the metastases were further examined by H&E. All animal studies were performed under the supervision and guidelines of the University of Rochester Medical Center Animal Care and Use Committee.

Mouse prostate tissues were fixed in 10% (v/v) formaldehyde in PBS, embedded in paraffin, and cut into 5 μm sections. Prostate sections were deparaffinized in xylene solution and rehydrated using gradient ethanol concentrations, and immunostaining was performed.

All statistical analyses were carried out with SPSS 19.0 (SPSS Inc, Chicago, IL). The data values were presented as the mean ± SEM. Differences in mean values between two groups were analyzed by two-tailed Student’s t test, and the means of more than two groups were compared with one way ANOVA. p ≤ 0.05 was considered statistically significant

11. Rosen ED and MacDougald OA. Adipocyte differentiation from the inside out. Nature reviews Molecular cell biology. 2006; 7:885–896.