The mammalian target of rapamycin (mTOR) and phosphoinositide-3-kinase (PI3K) pathways are often aberrantly activated in acute myeloid leukemia (AML) and play critical roles in proliferation and survival of leukemia cells. We provide evidence that simultaneous targeting of mTOR complexes with the catalytic mTOR inhibitor OSI-027 and of the p110α subunit of PI3K with the specific inhibitor BYL-719 results in efficient suppression of effector pathways and enhanced induction of apoptosis of leukemia cells. Importantly, such a combined targeting approach results in enhanced suppression of primitive leukemic progenitors from patients with AML. Taken together, these findings raise the possibility of combination treatments of mTOR and p110α inhibitors as a unique approach to enhance responses in refractory AML.

Acute myeloid leukemia (AML) is a highly fatal disease, as many patients do not respond to therapy or eventually relapse [1-3]. For older patients or patients with co-morbities who cannot tolerate intensive chemotherapy, the treatment options are particularly limited [4]. There is undoubtedly a need for new therapeutic regimens and innovative approaches to overcome resistance in AML. The disease has been associated with dysregulation and constitutive activation of the mammalian target of rapamycin (mTOR) and phosphoinositide-3-kinase (PI3K) signaling pathways, which promote aberrant cell growth and survival, and induce anti-apoptotic responses [5-8].

mTOR exists in two distinct complexes, mTOR complex 1 (mTORC1) and mTOR complex 2 (mTORC2). Each complex has distinct characteristics and downstream effectors, resulting in distinct functional outcomes. Activation of mTORC1 (a complex composed of mTOR, Raptor, PRAS40, mLST8 and DEPTOR) plays a central role in regulating initiation of mRNA translation and autophagy through its downstream targets 4E-BP1, S6K and ULK1 [9-11]. Activation of mTORC2 (a complex formed by mTOR, RICTOR, SIN1, mLST8, PROTOR and DEPTOR) regulates the pro-survival family of AGC kinases, including the kinase AKT, leading to effects on cell metabolism, survival, proliferation, and cytoskeletal rearrangement [9-11]. Specific mTORC1 inhibition has been extensively studied using rapamycin, however, recent evidence suggests the existence of rapamycin-insensitive mTORC1 complexes [12-15]. More recently, a new generation of catalytic mTOR inhibitors has been developed to target both mTOR complexes [12, 13, 16]. These mTOR inhibitors act by binding to the ATP-binding site of mTOR and thus block the activities of both mTORC1 and mTORC2 [12, 13, 16]. We have previously reported that dual targeting of mTORC1 and mTORC2 with OSI-027 results in enhanced antileukemic responses as compared to treatment with the classic mTORC1 inhibitor, rapamycin [17].

PI3K has also been identified as an important target for the treatment of several types of cancer, including AML [18-23]. Abnormal activation of the PI3K signaling pathway has been directly correlated to oncogenic activity, due to its prominent role in mediating cellular growth and survival [18, 20, 22]. There are three known classes of PI3K [22, 24]. Class-IA PI3K are heterodimers composed by a regulatory subunit, p85, and a catalytic subunit p110 [22, 24, 25]. Mutations leading to constitutive activation of the p110α subunit have been found in several types of cancer [18-22, 24]. PI3K is activated in AML, however, the mechanism is unknown, as mutations in PI3K isoforms have not been found [23, 26]. BYL-719 is a specific class-IA PI3K inhibitor, which acts by binding the ATP binding domain of the p110α subunit [27]. Recently, BYL-719 has been reported to have significant activity against tumors carrying mutations in the p110α subunit of PI3K [28, 29]. However, BYL-719 has achieved only modest effects as a single agent in malignancies with non-mutated PI3K [21, 29-31].

In the present study, we sought to evaluate the effects of combined targeting of AML cells, using a dual mTOR inhibitor, OSI-027, and a p110α subunit inhibitor, BYL-719. Our studies provide evidence that the OSI-027/BYL-719 combination induces potent and synergistic anti-leukemic responses in several AML cell lines with diverse molecular characteristics and in primary leukemic progenitors (CFU-L) from AML patients. 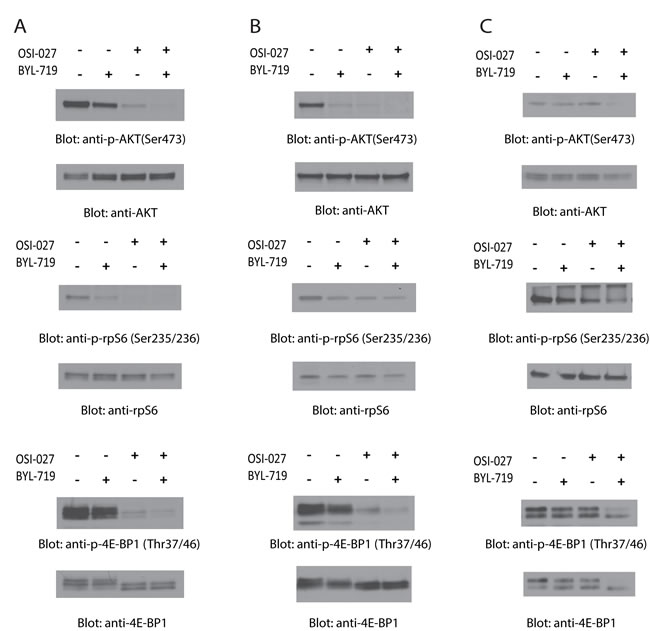 Figure 1: Dual targeting of PI3K and mTOR by BYL-719 and OSI-027 results in enhanced inhibition of activation of PI3K and mTOR pathways. (A) U937, (B) MM6 and (C) Kasumi-1 cells were treated with BYL-719 and OSI-027, alone or in combination for 90 minutes. Equal amounts of total cell lysates were subjected to SDS-PAGE and immunoblotted with antibodies against the phosphorylated forms of AKT (pSer-473), rpS6 (pSer-235/236), and 4E-BP1 (pThr-37/46), as indicated. The corresponding blots were stripped and reprobed with antibodies against total AKT, rpS6, and 4E-BP1, as indicated. 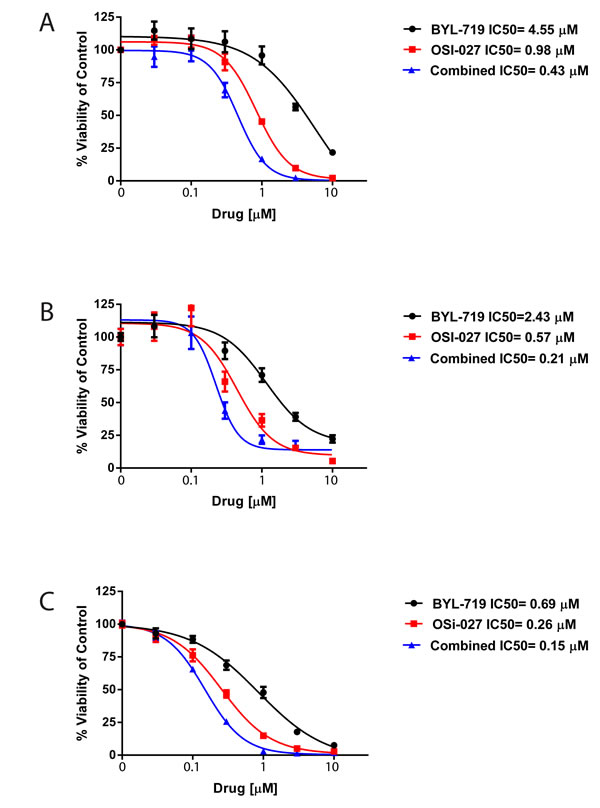 Figure 2: BYL-719 and OSI-027 synergize to inhibit the viability of AML cells. (A) U937, (B) MM6, (C) Kasumi-1 cells were plated in 96 well plates and treated with BYL-719 and OSI-027 alone and in combination, as indicated, for 72 hours. Viability was assessed using a WST-1 assay. Data are expressed as percentage of vehicle-treated cells (control). Shown are means and standard errors of five (A) or four (B and C) independent experiments.

To determine whether the potent and synergistic effects of the combined treatment with BYL-719 and OSI-027 correlated with induction of pro-apoptotic responses, we next measured the induction of cellular apoptosis using flow cytometry analysis for double staining with annexin V/DAPI. The combination treatment of BYL-719 and OSI-027 resulted in a statistically significant increase in the percentage of apoptotic cells, when compared to either inhibitor alone, in all AML cell lines (Fig. 3) . 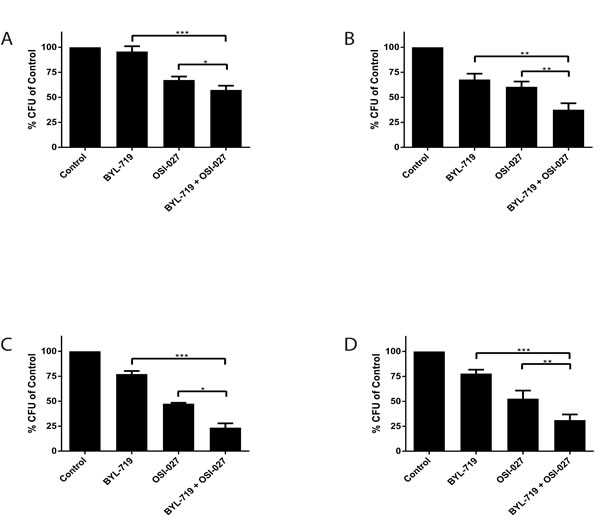 Constitutive activation of PI3K and mTOR pathways plays a key role in uncontrolled growth and survival of malignant cells [9-11, 18, 20, 22]. Because of such observations, these pathways have been identified as important targets for the treatment of several malignancies, including AML [9, 18-23]. We have previously shown that dual targeting of mTORC1 and mTORC2 with OSI-027 results in more potent antileukemic effects than treatment with rapamycin alone [17]. We have also established that catalytic mTOR inhibition enhances the suppressive effects of cytarabine [17], while other studies have shown that catalytic mTOR inhibitors are potentially less immunosuppressive than rapamycin [32]. Taken together, the results of these studies have suggested that catalytic mTOR inhibitors may be more optimal agents for the treatment of malignancies as compared to rapalogs, exhibiting more potent antineoplastic effects and less immunosuppression.

Pharmacological inhibition of PI3K using the LY294002 inhibitor was shown to block proliferation of primary AML blasts through inhibition of AKT-induced survival pathways [33]. LY2940002, however, has limited clinical potential due to toxicity problems and off-target effects [34]. Inhibition of PI3K by BYL-719 showed limited efficacy as a single agent in a RAS-driven model of AML [21]. Here, we present data that BYL-719 has modest antileukemic effects as a single agent on AML cells. The relative modest effects of PI3K inhibition alone can be in part explained by the fact that although PI3K activity is inhibited, activation of its downstream effectors, including AKT and mTORC1, is not completely blocked [28]. This could be explained via engagement of mTOR by signaling loops that circumvent the inhibition of PI3K by BYL-719 [28]. Notably, in pancreatic neuroendocrine tumors targeting of both PI3K and mTOR was required to generate inhibitory effects on cells that were resistant to the mTORC1 inhibitor RAD001 [31]. Regarding limitations of single mTOR or PI3K targeting in AML cells, it has been previously demonstrated that mTOR inhibition leads to activation of PI3K signaling via upregulation of IGF-1 [35]. Additionally, combinations of specific mTORC1 inhibitors with PI3K inhibitors may not be effective as a potential feedback loop involving mTORC2 activation by growth factors may contribute to survival of cancer cells [9-11]. Inhibition of mTORC1 or PI3K alone also effects cytokine production by AML cells that may induce negative feedback loops [36]. In addition, mTORC1 inhibition can result in activation of MAPK signaling, independently of PI3K [37]. Thus, combined targeting using PI3K and catalytic mTOR inhibitors provides a better strategy to prevent activation of feedback loops that lead to resistance to treatment. It should be noted that AML cells always express the PI3K isoform p110δ and heterogeneously express p110α and p110β [23]. Previously, p110δ selective inhibitors exhibited significant anti-leukemic effects on primary AML patient samples [38, 39]. Hence, future studies should assess the differences between targeting p110α and p110δ isoforms in terms of anti-oncogenic activity in AML. These studies should also address if inhibition of one isoform results in leukemic cell survival mechanisms involving compensation by activation of the other isoforms.

In the present study, we provide evidence that combination of BYL-719 and OSI-027 results in more potent inhibition of phosphorylation of mTOR downstream targets and in synergistic inhibition of leukemic cell viability and induction of apoptosis. In addition, we establish that combination of BYL-719 with OSI-027 is much more effective than treatment with each inhibitor alone in blocking the survival of primitive leukemic progenitors from AML patients in vitro. Studies from other groups have shown that dual PI3K-mTORC1/2 inhibitors exhibit antileukemic properties in AML [40-42], and are consistent with our findings. Altogether, the results of our studies support the combination of PI3K and mTOR inhibitors as a potential novel approach for the treatment of AML that warrants clinical study.

Cellular viability was assessed by plating AML cell lines in triplicates in 96-well plates. Cells were treated with vehicle alone (DMSO), BYL-719, OSI-027, or combination of BYL-719 and OSI-027 at the indicated concentrations. 72 hours later, cell viability and proliferation were quantified using the WST-1 Reagent (Roche) according to the manufacturer’s protocol. IC50 and CI values were calculated using Compusyn to determine whether drug interactions were additive, synergistic or antagonistic [44].

Cells were treated with vehicle (DMSO), BYL-719, OSI-027 or the combination of BYL-719 and OSI-027 for 72 hours. U937 and MM6 cells were treated with BYL-719 or OSI-027 alone or in combination, at a final concentration of 5µM. Kasumi-1 cells were treated with these agents at a final concentration of 1µM. Cells were stained with Annexin V and 4’-6-diamidino-2-phenylindole (DAPI)-DNA staining according to the manufacturer’s instructions (BD Biosciences). Flow cytometric analyses were performed on stained cells using a LSRFortessa flow cytometer (BD Biosciences). Cell gating and analyses were done using FlowJo software (Tree Star, Ashland, OR).

All statistics were performed using Prism Graphpad 6.0 for PC.

38. Billottet C, Grandage VL, Gale RE, Quattropani A, Rommel C, Vanhaesebroeck B and Khwaja A. A selective inhibitor of the p110delta isoform of PI 3-kinase inhibits AML cell proliferation and survival and increases the cytotoxic effects of VP16. Oncogene. 2006; 25(50):6648-6659.