We recently reported that a DNA plasmid coding p62-SQSTM1 acts as an effective anti tumor vaccine against both transplantable mouse tumors and canine spontaneous mammary neoplasms. Here we report the unexpected finding that intramuscular delivery of p62 DNA exerts a powerful anti-osteoporotic activity in a mouse model of inflammatory bone loss (i.e, ovariectomy) by combining bone-sparing and osteo-synthetic effects. Notably, the suppression of osteoporosis by p62DNA was associated with a sharp down-regulation of master inflammatory cytokines, and up-regulation of endogenous p62 protein by bone-marrow stromal cells. The present data provide a solid rational to apply p62 DNA vaccine as a safe, new therapeutic for treatment of inflammatory related bone loss diseases.

The adapter protein p62 (also known as sequestosome1/SQSTM1) is a multifunctional molecule involved in a myriad of cellular processes that modulate proliferation, cell death, inflammation and immune response [1]. Further studies demonstrated that p62 plays an important role in patho-physiology of human diseases including neurodegenerative diseases, lung disease, obesity, insulin resistance, cancer, and Paget's disease of bone [2]. Since p62 holds a key role in innate immunity by regulating inflammatory signaling cascades, the hypothesis that deregulated p62 is linked to the chronic allostasis that foster dreadful inflammatory disorders is gaining ground [3, 4]. Accordingly, p62 has been envisaged as a potential target in cancer, infectious and inflammatory diseases [5].

Although there are no in vivo data regarding the role of exogenous p62 in inflammation, there are some in vitro evidence suggesting that p62 may act as an important regulator of cytokine expression [8–11]. In example, in activated macrophages p62 overexpression and underexpression clearly lead to opposite effects pointing to the inhibitory role of p62 in cytokine expression, thus providing a mechanism by which p62 controls excessive inflammatory responses [11]. Of much interest, is a recent report that highlights the anti-inflammatory tumor suppressor potential of p62, as its down-regulation in the tumor stroma fosters an inflammatory response that enhances tumorigenesis both in vitro and in vivo [12].

The existence of a causal link between inflammation and p62 is further supported by the observation that the lack of a p62 (or macroautophagy) contributes to inflammation in aging [4]. The term “inflammaging” was coined at the beginning of this century by Franceschi et al. [13] to refer to a low-grade pro-inflammatory phenotypes which accompany aging in mammals and that predispose the organism to develop several age-related diseases.

Osteoporosis is, by far, the leading age-related disease affecting mostly women after onset of menopause. Because estrogens contribute to bone-sparing activity by inhibition of bone remodeling (coupled with a balancing effect on bone formation and resorption), decreased levels of circulating estrogen at menopause results in a rapid bone loss [14]. Further observations indicate that the estroprivic bone loss reflects increased number of T cells, that in concert with macrophages and bone marrow-derived stromal cells promote the release of pro inflammatory cytokines (e.g TNF-α and IL-1β beta, IL-6, and RANK-L) that propel osteoclastogenesis, and thereby bone erosion [15] (See Supplementary Figure 1). Finally, the strong link between inflammation and osteoporosis is further evidenced by clinical studies showing that chronic inflammatory diseases of almost any cause, are associated with bone loss (osteopenia) [16].

Based on the putative anti-inflammatory role of p62, together with the fact that p62 physiologically controls osteoclastogenesis and bone remodeling [17], we hypothesized that p62 DNA vaccine could compensate for osteoporosis. To test the hypothesis we carried out experiments by injecting p62 DNA in ovariectomized (OVX) mice. Since ovariectomy induces chronic inflammation in mice and in humans [18], this animal model is widely utilized to study premature aging [19], and to test experimental anti-osteoporotic drugs and biologicals [20].

The results shown below are representative of those obtained by in independent trials carried out both in preventive and therapeutic settings.

To evaluate whether p62 vaccine was able to prevent osteoporosis, groups of mice were first injected either with experimental (p62DNA) or reference plasmids (pcDNA 3.1) and then ovariectomized (OVX). For each trial a control group of sham operated (SO) mice was included (see M&M for details). Two months after surgery mice were sacrificed, and the collected long bones subjected to histological examination. As expected, the metaphyseal regions of the distal femurs from pcDNA3.1-OVX mice displayed classical osteoporotic features characterized by significant bone loss and thinned disconnected trabecular structure (Figure 1B, 1E). On the other hand, p62-OVX bones (Figure 1C, 1F) showed a micro-architecture essentially indistinguishable to that seen in SO mice (Figure 1A, 1D). Moreover, examination of cross sections femur diaphysis from p62DNA-OVX mice revealed (at variance of those obtained from reference plasmids treated mice) an enhanced anabolic-osteoblastic activity as evidenced by new cortical bone apposition suggesting an anabolic action of p62 treatment. (Figure 1G–1L).

Fully consistent with the morphological findings are the biochemical results obtained by utilizing bone marrow stromal cells (BMCs) retrieved from plasmids pre-treated mice. In these experiments BMCs were flushed from the bone cavities, and cultured for 3 days. Afterwards, both supernatants and cells were collected and analyzed respectively either for the release of inflammatory cytokines, or for expression of osteogenic markers. As illustrated in Figure 2, we observed that the marked up-regulation and release of pro-inflammatory cytokines by BMCs from OVX compare to SO operated mice was drastically suppressed by p62-DNA pretreatment. The inhibitory effect of p62 DNA extended to an array of cytokines such as TNFα, IL-6, IL-1b IL-17, all known to be essential inducers of inflammatory diseases and bone loss [21]. As far as the capability of p62DNA to induce new bone formation is concerned, western blotting analysis of p62-OVX BMCs extracts indicated a strong and selective increase of osteogenic markers, such as Runx2 and Osterix transcription factors [22]. An increase of Runx2 and Osterix, although weaker, was also found in p62 SO mice (Figure 3).

p62 DNA as an anti-osteoporosis therapeutic

After establishing that p62 DNA vaccine demonstrates robust effects not only in preventing osteoporosis but also in inducing new bone formation, we assessed the therapeutic potential of p62 DNA in case of established osteoporosis. In these trials, mice were ovariectomized and, after two months, injected either with p62-DNA or reference plasmids (see M&M for details). Two months after last plasmids injections, bones were collected and histologically evaluated. In this set of experiments we reproducibly found that OVX-p62 treated mice group (at variance of control groups) showed a restored trabecular microarchitecture at metaphyseal regions of the distal femurs and a decreased porosity in cortical bone (Figure 4A–4H). In addition, p62-DNA treatment proved to increase both bone mineral density (BMD) and content (BMC) as judged by DEXA analysis (Figure 5A–5B). Finally, coupled with marked up-regulation of osteoblastogenic Runx2 and Osterix (Figure 6A), a strong inhibition of two majors bone resorptive factors such as TNFα and RANKL was also observed in BMCs from OVX-p62 mice. It is worth noting that RANKL is a key mediator of inflammation that, by binding to its receptor RANK on osteoclast precursors, fosters osteoclastogenesis via intracellular NF-kB signaling [23]. In our experimental setting, a down-regulation of NF-kB in OVX-p62 BMCs was also observed (Figure 6B). 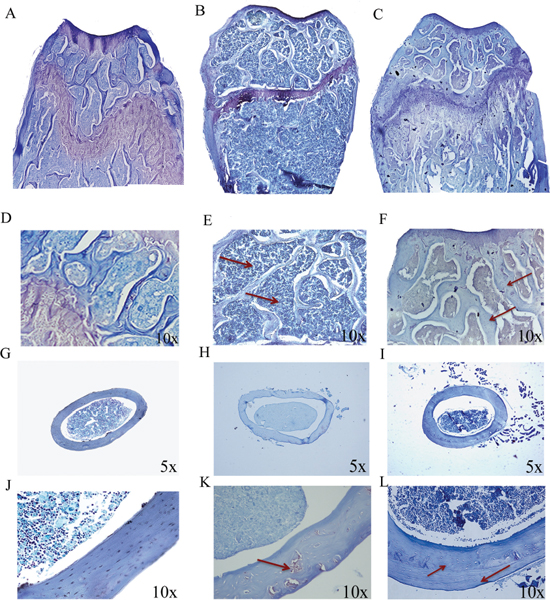 As anticipated, although there are reports in the literature suggesting that in vitro overexpression of p62 may dull the production of inflammatory cytokines [11], there are no in vivo data about a putative role of exogenous p62 DNA in inflammation. While not wishing to be held by theory, we evaluated the expression levels of p62 in BMCs retrieved from plasmids injected in mice before ovariectomy. With much of our surprise, we found that while p62 expression in BMCs was down-regulated by ovariectomy, BMCs from p62 DNA pre-injected mice demonstrated a sturdy and selective up-regulation of p62 (Figure 7A). Consistently, an increased p62-immune labeling was observed at the epiphyseal region of femurs of p62-OVX mice (Figure 7B).

Next we asked whether this enhanced p62 immune-reactivity refers to exogenous human p62DNA or to endogenous mouse p62. In order to distinguish between these two possibilities we utilized two types of anti-p62 antibodies for western blotting analysis of BMCs extracts: a polyclonal rabbit Ab that recognized both human and mouse p62, and a monoclonal Ab that recognize only human p62 [24]. A human p62 recombinant protein was loaded as positive control. As depicted in (Figure 7C), we found that p62DNA administration clearly up-regulates endogenous p62 protein in bone marrow resident cells.

A growing understanding of the bone remodeling processes suggest that factor involved in inflammation are linked with those critical for bone physiology and remodeling, supporting the theory that inflammation significantly contributes to the aetiopathogenesis of osteoporosis. Indeed, our results provide for the first time evidences that in this model (OVX) of inflammation-mediated osteopenia, p62DNA, by exerting powerful anti-inflammatory effects, counteracts bone loss, and as consequence, promotes new bone formation [25]. Importantly, the dramatic effects of p62 DNA on bone homeostasis were not associated with any side effects as demonstrated by previous long-term toxicological studies [26]. In this context it has to be underlined that the major pharmacological interventions for osteoporosis, so far proposed, evidenced a long list of worrisome side effects [27, 28].

Taken together, our data can be viewed as proof of concept for pre-clinical and clinical development of an unprecedented strategy based on p62-DNA to counteract osteoporosis [29]. More broadly, we hypothesize that the administration of p62 DNA may quench chronic inflammatory reactions underpinning a variety of age-related diseases. 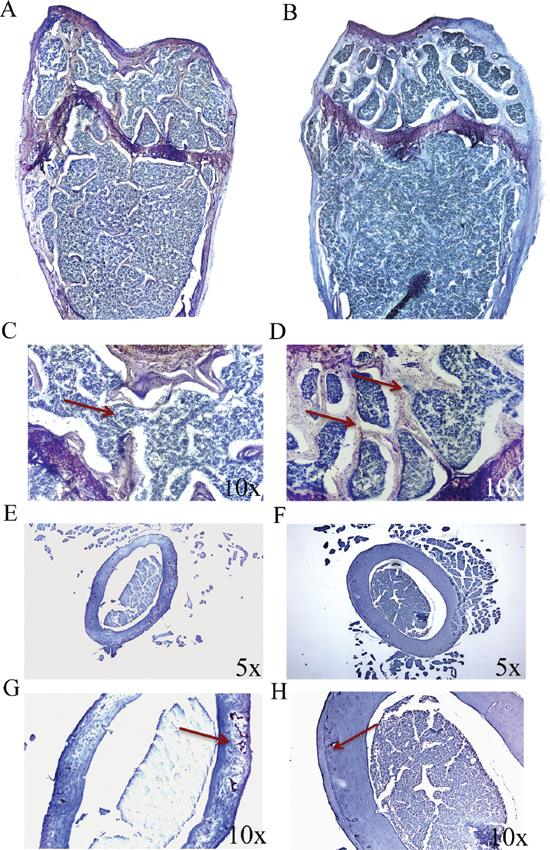 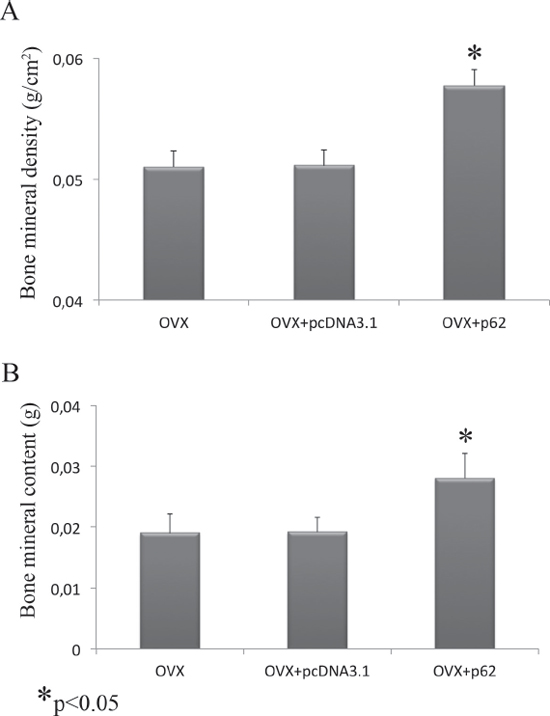 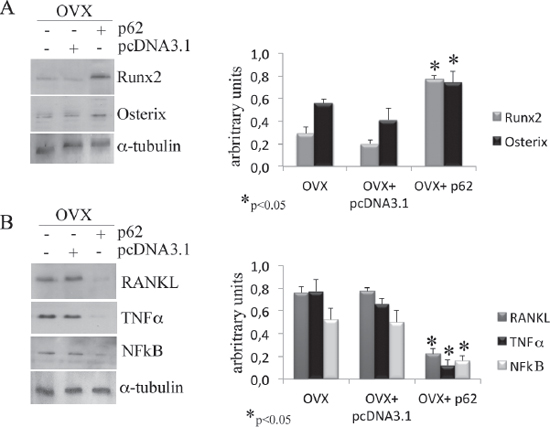 Figure 6: p62 vaccine decreases pro-inflammatory markers. Total bone marrow cell population was obtained from long bones of OVX, OVX-pcDNA3.1 and OVX-p62 DNA. Note the statistically significant increase of Runx2 and osterix (A) as well as the decrease of RANKL, TNFα and NFkB (B) protein levels only after p62 treatment. (*p < 0.05). 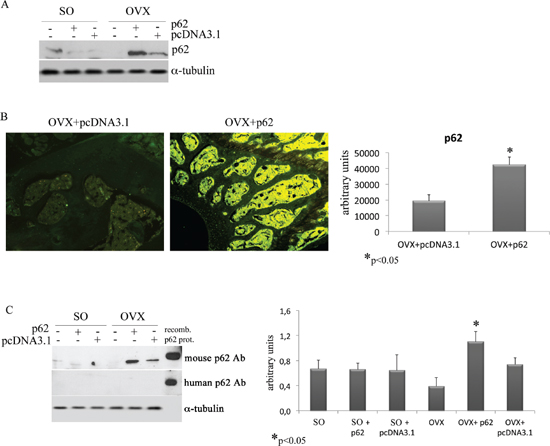 Figure 7: p62 encoding plasmid up-regulates the endogenous p62 protein synthesis. p62 protein levels were detected in total bone marrow population (A) and in the epiphyseal areas of femur sections (B) by Western blotting and immunofluorescence, respectively. Note the increase of p62 synthesis in samples from p62-OVX mice. Evaluation of p62 levels in BMCs by a specific mouse/human antibody or by a specific human antibody. Note the lack of human p62 detection, and the increase of mouse p62 protein in BMCs from p62-OVX mice (C) (*p < 0.05).

Thee-month old female FVB and Balb/c mice (Harlan Italy SrL, Correzzana Milano, Italy) were used. Mice were kept in laminar-flow cage in a standardized environmental condition. In prevention trials mice were randomly distributed in three groups (G1–G3) and injected intramuscularly at week 0, 1, 2 with only saline (G1, n = 12), with pcDNA3.1 (G2, n = 12), or with hp62 DNA (G3 n = 12). At day forty-five after the last injection, mice from each group were randomly divided in two subgroups and were sham operated (SO; n = 6) or ovariectomized (OVX n = 6). After two months mice were sacrificed by CO2 narcosis according to the recommendation of the Italian Ethical Committee. For therapeutic trials mice were ovariectomized (OVX) and left untreated for 2 months. Afterwards, mice were randomized in 3 groups, and injected with plasmids as described above. After 2 months mice were sacrificed for analysis.

Femurs were dissected and fixed as above described. Bone mineral density (BMD) and bone mineral content (BMC) were measured using a PIXImus DEXA [31].

Long bones (femurs, tibiae and humeri) from the above mouse groups were dissected free of adhering tissue. The ends were removed and the marrow cavity was flushed and cultured in DMEM as previously described [32].

All in vitro and in vivo experiments were repeated at least three times. t-student was used to test for significant differences between two groups, and differences were considered significant at (*p < 0.05).

This work was partially supported by Pharma 2020 Technology Transfer grant to A.S., by Strategic University FAR Project (Unicam) Grant to FM.V, and by FAR (Unicam) to M.G.S.