Copyright: © 2022 Seldon et al. This is an open access article distributed under the terms of the Creative Commons Attribution License (CC BY 3.0), which permits unrestricted use, distribution, and reproduction in any medium, provided the original author and source are credited.

On MVA, including TP53-mutations, mut31, CDKN2A-deletion, PTEN-deletion, and MYC-amplification, all five alterations were independently prognostic of poor PFS and DSS.

Similar results were observed in an independent cohort from MSK-IMPACT (n = 7,051) where TP53 was associated with poor OS independent of mut31 and CN alterations in CDKN2A, PTEN, and MYC in primary tumors (p < 0.0001).

Several studies have characterized the association of TP53 mutations with clinical outcomes in breast cancer [4], non-small-cell lung cancer [5], cholangiocarcinoma [6], thymic carcinoma [7], and in pan-cancers [8, 9]. Other studies have demonstrated that gaining additional mutations or CN alterations increases risk of disease progression. For example, men with prostate tumors that have compound tumor suppressor gene mutations (TP53, PTEN, RB1) have poorer outcomes [10]. Although previous research has elucidated the prognostic significance of TP53 mutations in individual cancers, the independent prognostic role of mutations in this gene at a pan-cancer level independent of other mutations and genomic alterations remains unclear.

In this work, we identified the most commonly mutated and copy number altered genes from the Pan-Cancer TCGA cohort (n = 9,104) and associated them with progression free survival (PFS) and disease specific survival (DSS) independently and after adjusting for TP53 mutations. We subsequently used the MSK-IMPACT cohort (n = 7,051) to validate the associations between genomic alterations and overall survival (OS) in patients with primary and metastatic tumors.

TCGA identified 32 mutated genes (including TP53) and 15 CN altered genes with frequency greater than or equal to 4% (≥4%) in 9,104 patients across 28 cancers. In the TCGA cohort, 37% of subjects had a TP53 mutation, and 68% had at least one mut31 mutation; furthermore, 81% of patients with TP53 mutations had one additional mutation in at least one of the mut31 genes. Furthermore, CDKN2A was the most frequent deletion (10.9%) and MYC was the most frequent amplification (13%) (Supplementary Table 1). 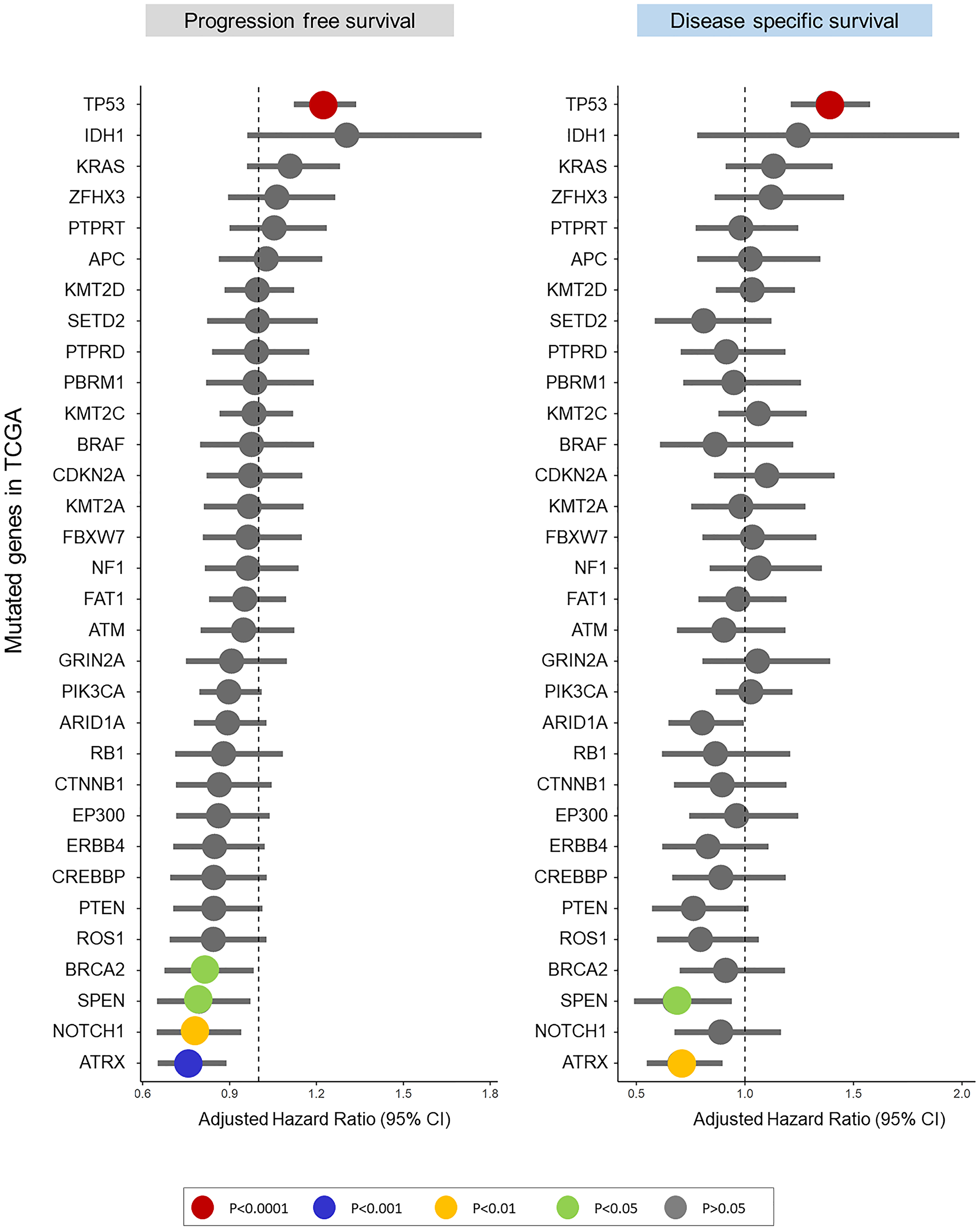 Figure 1: Adjusted hazard ratios from stratified Cox regression model predict PFS and DSS in the Pan-Cancer TCGA cohort for the 32 most common mutations. 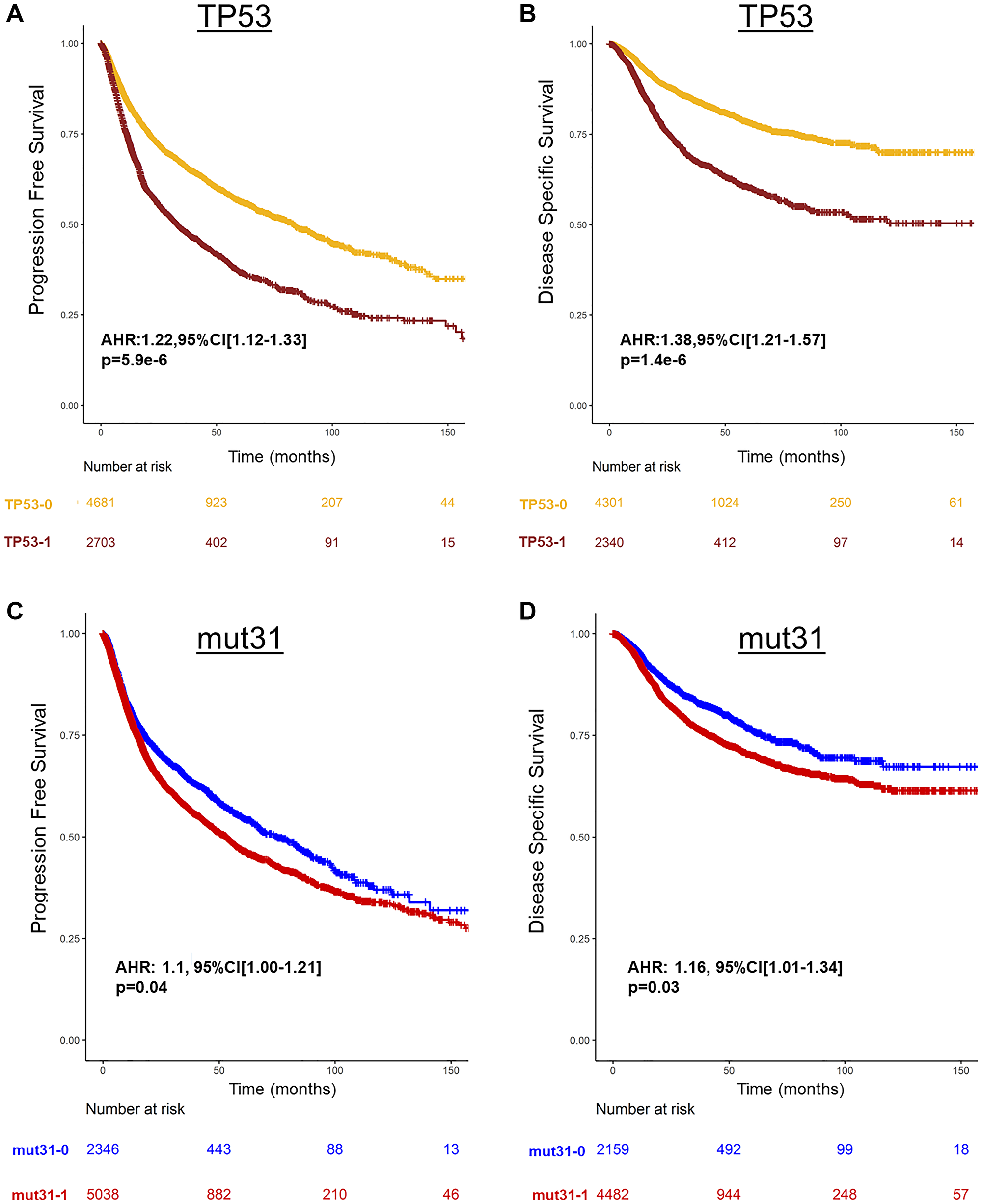 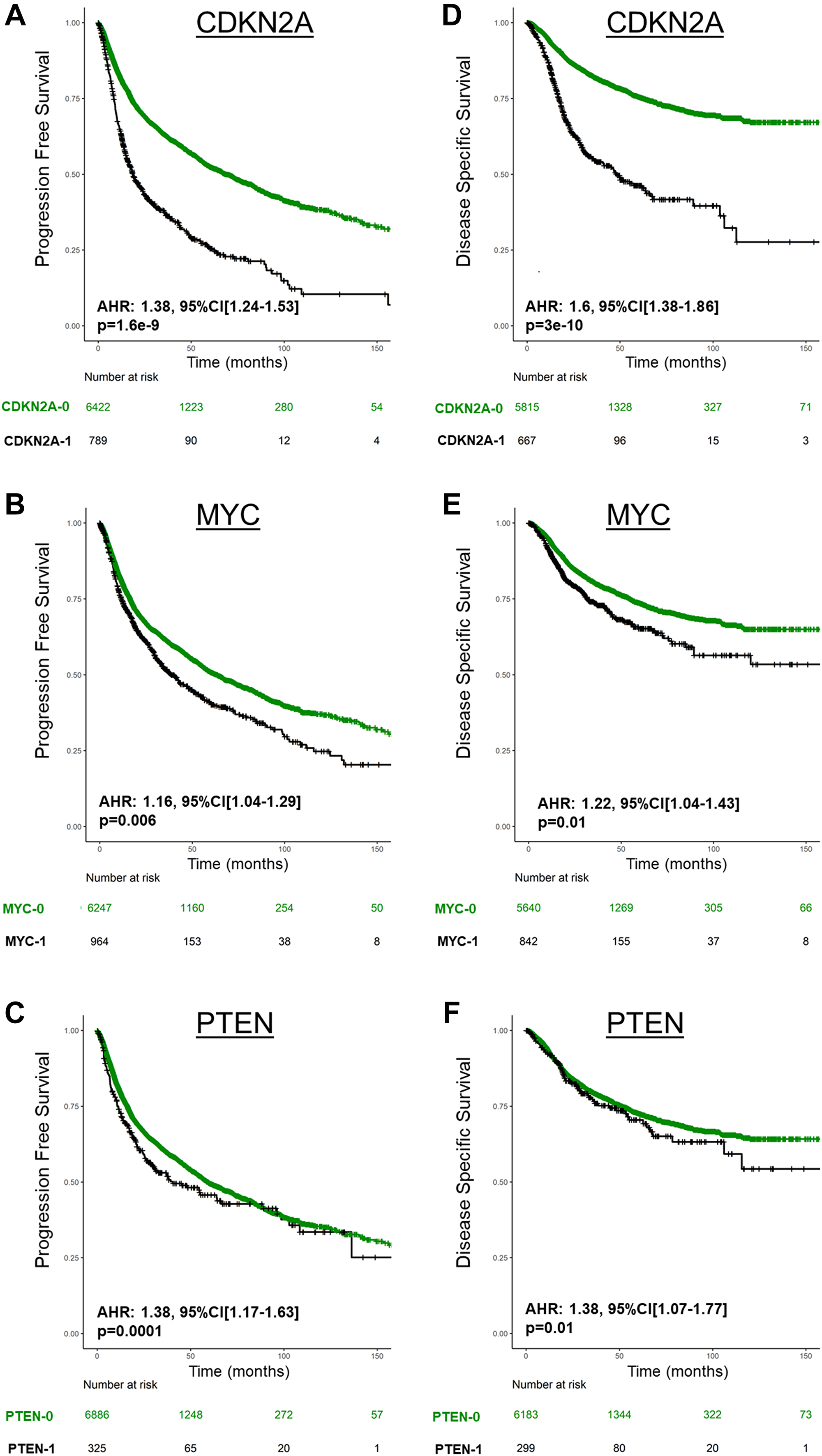 In MVA model adjusting for TP53 mutations, mut31, CDKN2A deletion, PTEN deletion and MYC amplification, all five alterations were independently prognostic of PFS and DSS (P < 0.05 for all, Figure 4A, 4B).

Figure 4: Multivariable analysis (MVA) of TP53-mutations, mut31, CDKN2A-deletion, PTEN-deletion, and MYC-amplification in Pan-Cancer TCGA. (A, B). The five genomic events are independent predictors of PFS and DSS. 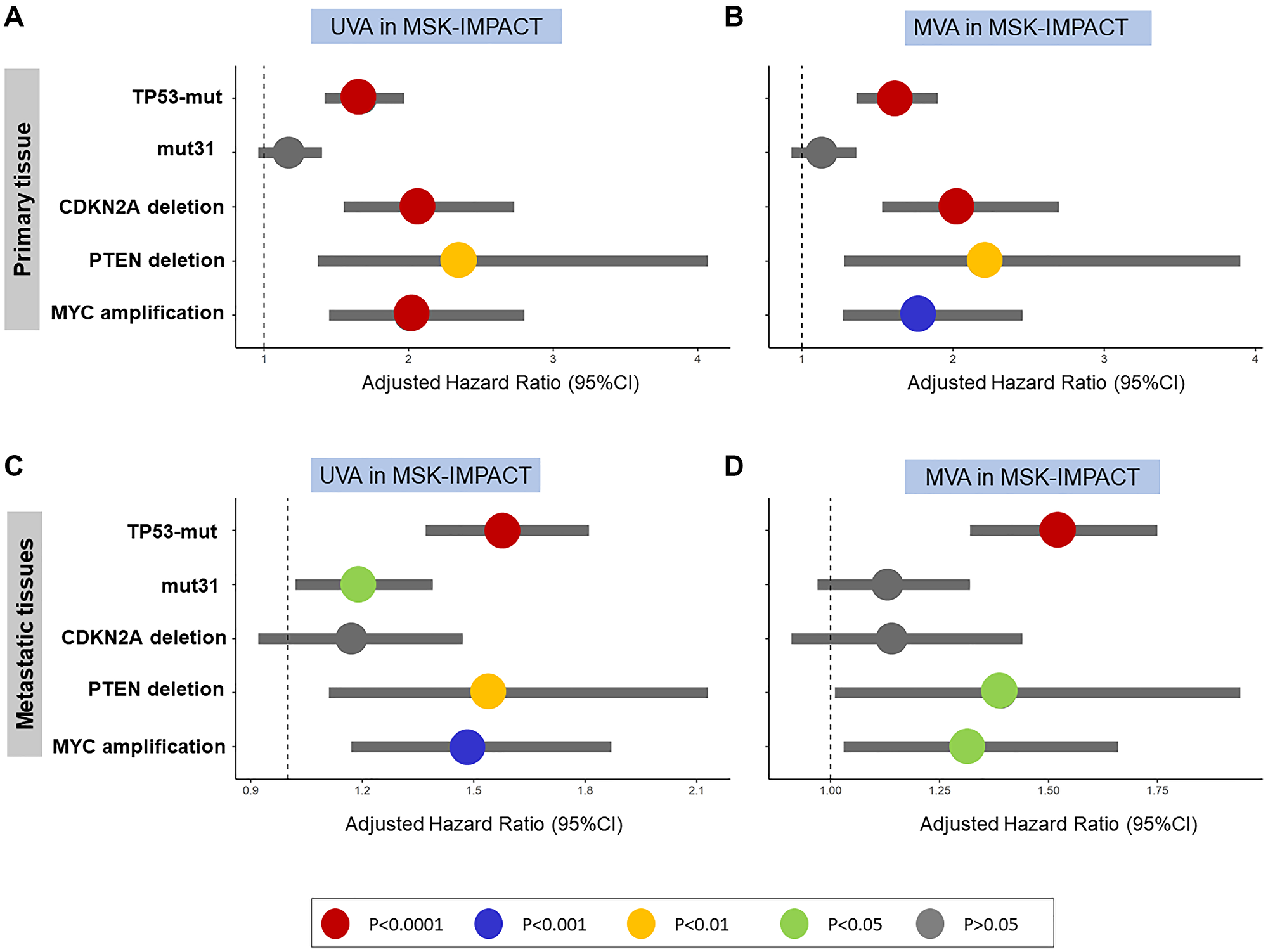 Comparison of results between the TCGA and MSK-IMPACT cohorts

Mut31, on the other hand, was not as significant of a biomarker as TP53. It was prognostic for DSS and PFS by itself (p < 0,0001), but due to the large overlap with TP53 (81% of TP53 mutated samples also had a mut31 mutation), it was not a predictor for DSS or PFS in the TCGA cohort. Additionally, in the MSK-IMPACT cohort, mut31 was only significantly associated with poor OS on UVA in metastatic disease.

CN alterations showed consistent data for the 3 main markers: CDKN2A deletion, PTEN deletion and MYC amplification. These were prognostic of worse PFS and DSS in the TCGA cohorts both on UVA and MVA, which stayed consistent when adjusting for the mutational variables (TP53 and mut31) (p < 0,05 and below). In MSK-IMPACT, these 3 CN alterations were all significantly associated with worse OS in non-metastatic patients, with all but CDKN2A deletion significant in metastatic patients (p < 0.05 and below).

Application of clinical genomics to diagnosis, prognosis, and treatment has become routine in many cancers and has been adopted by several cancer institutions in clinical practice. MSKCC, for example, developed and implemented MSK-IMPACT, an NGS panel capable of detecting all protein-coding mutations. MSK-IMPACT has prospectively sequenced tumors from more than 10,000 cancer patients, spanning a vast array of solid tumor types; these data are publicly available on http://www.cbioportal.org. In the current study, we utilized data from both the MSK-IMPACT cohort and the Pan-Cancer TCGA cohort of more than 8,000 patients with PFS and DSS outcomes to conduct the first and largest comprehensive analysis of prognostic genomic alterations across cancers. The data presented here offer several novel insights. First, TP53 is the most prognostic mutation regardless of the mutational status or copy number alterations of the other commonly altered genes, while other mutations were not prognostic of poor outcomes. Having any mutation in mut31 is slightly associated with poor clinical outcomes after adjusting for TP53, suggesting that TP53 mutations have the most impactful prognostic implications, and that gaining additional mutation is not increasing the risk of poor clinical outcome in patients with TP53 mutations. This result was validated in two large pan-cancer cohorts with different clinical outcomes (PFS, DSS, OS).

There were several limitations in this study. One limitation of this study is that non-silent mutations were treated equally without being further sub-grouped based on their function or location. Adjustment for molecular heterogeneity was very difficult given the available variables in these datasets. Additionally, the lack of clinical variables such as tumor stage and size in some cohorts, especially in MSK-IMPACT, precluded analysis which could identify interesting results with disaggregation among cancer types. The two cohorts used different endpoints (PFS and DSS vs. OS) which allowed for the independent validation of prognostic value, but having the same endpoints would be a stronger form of validation. It is also important to note that some mut31 genes have a larger influence on outcomes in certain cancers over others. While some of these genes are specific for certain individual cancers, a limitation of this study is that we are pooling all cancers together, thus not adjusting for molecular heterogeneity. Future work should continue to investigate the prognostic values of mutations across cancers.

The Pan-Cancer TCGA cohort was used to query genomic alteration data in 9,104 patients across 28 cancer types; 7,465 of these patients had clinical outcome data for survival analyses described below. The MSK-IMPACT pan-cancer cohort (n = 7,051) was used for independent validation of survival analyses in primary (n = 3,684) and metastatic cancer (n = 3,367). Clinical outcome data were downloaded from the TCGA Pan-Cancer Clinical Data Resource [11]. MSK-IMPACT data (mutations, copy number, and survival data) were downloaded from the cBioPortal for Cancer Genomics (http://www.cbioportal.org/).

Non-silent somatic mutation data and copy number (CN) alterations for the TCGA pan-cancer cohort were downloaded from the UCSC Xenabrowser (https://xenabrowser.net). CN were defined based on GISTC2.0 scores; samples with scores less than −0.8 were defined as CN loss, and tumors with scores greater than 1 were defined as CN amplification. There were 32 mutated genes and 15 CN-altered genes with alteration frequency greater than or equal to 4% (Supplementary Table 1) were used for survival analyses. Because the other mutations in the 32 gene set were much less frequent than TP53, they were pooled into one group (mut31). Mut31 was annotated as 1 if there was a mutation in any of the 31 genes and 0 if there was no mutation in any of the genes.

The primary study endpoints were progression free survival (PFS) and disease specific survival (DSS) in TCGA and overall survival (OS) for MSK-IMPACT. The primary independent variables of interest were genomic alterations including TP53 mutations, a mutation in any other commonly mutated gene (mut31), and CN alterations. Cox regression analyses defined adjusted hazard ratios (AHRs) for the aforementioned endpoints in the TCGA cohort. Univariable analyses were conducted on the aforementioned genomic alterations of interest. To determine whether mut31 or CN alterations were prognostic independent of TP53 mutation, multivariable analyses were repeated with TP53 mutation status, mut31 status and CN status in one model with cancer type as stratified covariable. The aforementioned Cox regression analyses were repeated in the MSK-IMPACT cohort in each disease state (metastatic versus non-metastatic) separately. Lastly, all survival analyses were stratified by tumor type in the Cox regression models.

All the data we used is publicly available data from other institutions. According to the patient consent section in the original paper (Zehir Ahmet et al., Mutational Landscape of Metastatic Cancer Revealed from Prospective Clinical Sequencing of 10,000 Patients, Nature Medicine, 2017). They wrote “Patients undergoing MSK-IMPACT” testing signed a clinical consent form or, in >85% of cases, enrolled on an institutional IRB-approved research protocol (NCT01775072).