Metanephric adenoma: molecular study and review of the literature

Copyright: © 2022 Rodríguez-Zarco et al. This is an open access article distributed under the terms of the Creative Commons Attribution License (CC BY 3.0), which permits unrestricted use, distribution, and reproduction in any medium, provided the original author and source are credited.

Introduction: Metanephric adenoma (MA) is an uncommon benign tumor accounting for 0.2–0.7% of adult renal epithelial neoplasms. The clinical course is often indolent, but diagnosis should not be delayed since clinical symptoms (hematuria, fever, palpable abdominal mass, and flank pain) may be non-specific and overlap with those of a malign renal neoplasm. We report on 4 cases of AM, for which morphological and mutational analysis were performed.

Results: In all four cases, tumors were visible as well-circumscribed, non-encapsulated masses located in the renal cortex and extending towards the medulla. At immunohistochemical examination, tumor cells stained negative for CK7, CD10 and RCC and positive for both WT1 (nuclear, intense) and vimentin (cytoplasmic, intense, and diffuse). Molecular analysis revealed the BRAF gene mutation V600E in three cases and wild-type BRAF in the fourth.

Metanephric adenoma (MA) is a rare benign tumor of the kidney, accounting for 0.2% of adult renal epithelial neoplasms [1]. The tumor, which is composed of primitive metanephric cells [2], is often asymptomatic. Some authors have suggested that MA may derive from maturing nephroblastomas (Wilms tumor), since immunophenotypic findings overlap closely with those of differentiated nephroblastoma and nephrogenic rests [3]. Though it may also occur in children, it is detected mainly in adults aged between 50 and 70 and is more common (ratio 2:1) in women [2, 4, 5]. Radical nephrectomy, cryoablation and radiofrequency have been used to treat this neoplasm [5].

While the clinical course is benign, histological findings often overlap with those of malignant tumors including Wilms tumor and renal papillary neoplasms, thus prompting the need for differential diagnosis [6]. A better understanding of this benign tumor would undoubtedly aid the development of less invasive strategies. Although most authors rule out the possibility of MA becoming malignant, one case has been reported of a metanephric adenoma in association with a high-grade sarcoma (metanephric adenosarcoma) [5, 7].

Activation of RAF, in both its homodimer and heterodimer forms, triggers the phosphorylation of MAPK kinase (MEK), which in turns prompts the phosphorylation of extracellular signal-regulated kinase (ERK); ERK activation promotes cell proliferation and signal transformation through interaction with several molecules crucial to tumor pathogenesis [9, 10].

The specific BRAF gene mutation V600E has been reported in over half of all cutaneous melanomas and papillary thyroid carcinomas, as well as in a number of blood cancers including hairy cell leukemia; it is also present in indolent and benign tumors such as melanocytic nevus [11]. This specific mutation has also been studied in malignant neoplasms such as renal cell carcinoma in response to targeted therapies [12]. In benign neoplasms like MA, several authors have noted that testing for the BRAF V600E mutation may be a valuable tool for the diagnosis [1, 2, 11].

Gross examination revealed well-circumscribed, non-encapsulated tumors measuring between 1.5 and 6 cm (mean 3.7 cm), with focal areas of blood-containing cysts and solid, in some cases presenting calcifications. Histologically, MAs were composed of small, monomorphic epithelial cells displaying no significant atypia or mitotic figures, showing papillary or acinar patterns, and edematous or hyalinized stroma with calcification (psammoma bodies) (Figure 1A). Immunohistochemical examination showed positive staining for WT1 and vimentin, and negative staining for racemase, CK7, CD10, CD57 and RCC (Figure 1B). Mutation analysis by real-time PCR revealed the BRAF gene mutation V600E in three cases and wild-type BRAF in the fourth. Based on morphological features and the findings of immunohistochemical and molecular analysis, all four cases were diagnosed as MA. Three of the patients are alive and well 12, 5 and 2 years after surgery, while the fourth died 13 years after the procedure due to other causes. 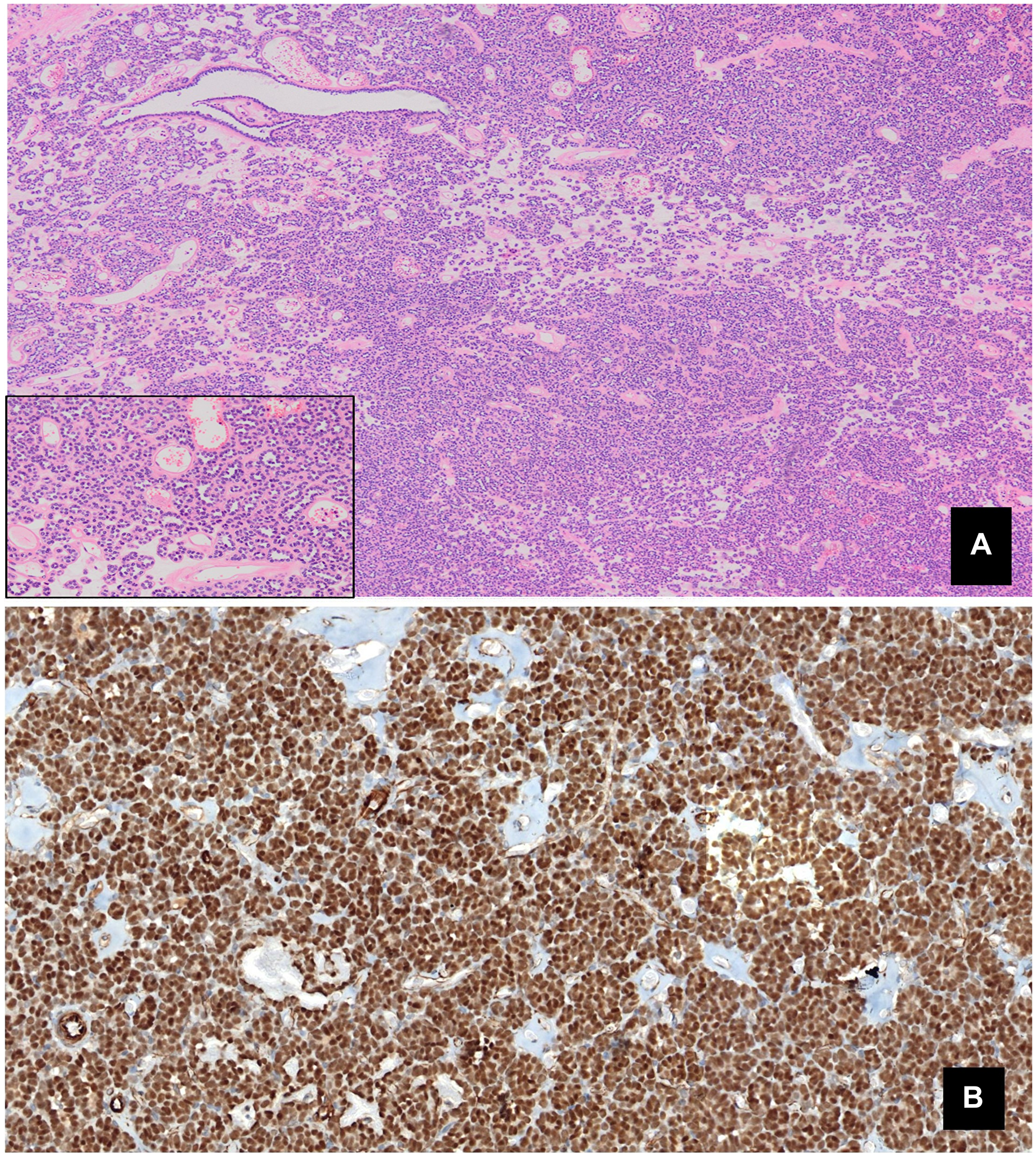 At gross examination, MA appears as a well-circumscribed neoplasm with a yellowish surface, often displaying evidence of secondary changes including focal necrosis, hemorrhage and/or cystic degeneration. Coarse calcification may also be present. The tumor mass generally ranges in size between 3 and 6 cm in diameter, although tumors of up to 15 cm have been reported [4]. Histologically, it comprises an acinar arrangement of small cells. Differential diagnosis of MA includes Wilms tumor, nephrogenic rests and renal papillary neoplasms [5]. MA typically expresses WT1 and CD57, but stains negative for CK7 and racemase. Positive intense staining for WT1 was recorded in the four cases reported here, but CD57 staining was in most of them weak; so, BRAF mutation helped us to confirm the diagnosis of MA.

Oncogenic BRAF normally regulates cell division and differentiation through the MAP kinase signaling pathway. BRAF mutations, identified in several solid tumors and blood cancers, prompt the constitutive activation of the pathway, which has been widely documented in melanomas [9, 10, 14]. Most BRAF mutations involve a thymine-adenine transversion, leading to the substitution of valine by glutamic acid at codon V600 (V600E) [14].

Several authors have drawn attention to the relationship between wild-type BRAF and MA in younger adults (i.e., under 25). Of the 29 cases reported by Choueri [11] et al., all three patients harboring wild-type BRAF were well below the mean age. By contrast, in the four pediatric cases of MA described by Chami et al. [22], only one harbored wild-type BRAF. An epidemiological analysis was carried out of the published cases of MA in which the BRAF mutation has been studied. In Table 2 it can be observed that, although the age range of presentation is similar in both groups, the mean age is 19.6 years lower in the wild-type BRAF patients (31.1 vs. 50.7). The present study detected the BRAF gene mutation V600E in patients aged between 50 and 65, while the youngest patient (aged 19) harbored wild-type BRAF.

Therefore, mutated BRAF MA are more frequent in elderly patients and women, which is consistent with studies in other pathologies. Even with these results, it is necessary to carry out studies with a greater number of cases in order to ensure it.

This paper reports on MA in three men and one woman, aged between 19 and 65 (mean age 47.5); patient data are provided in Table 3. The diagnosis was confirmed and subsequently reviewed following WHO-recommended criteria [4]. In all cases, MA presented as a single, asymptomatic mass discovered incidentally during imaging procedures; CT scan confirmed the presence of a solitary, space-occupying, solid renal tumor. A nephrectomy was performed in all patients.

These results bear out the findings of previous studies of BRAF gene mutations in MA, showing that molecular mutation analysis may aid diagnosis in cases with atypical histological features, especially in small biopsies when non-surgical treatment is planned.

A highly accurate definitive diagnosis of MA was achieved by combining immunohistochemical and molecular analysis; mutated BRAF MA are more frequent in elderly patients and women. Accurate early diagnosis may help to avoid unnecessary aggressive treatments such as radical nephrectomy.

This research did not receive any specific grant from any funding agency in the public, commercial, or not-for -profit sector.