Hypoxia-inducible factor 1 alpha is regulated by RBM38, a RNA-binding protein and a p53 family target, via mRNA translation

Although HIF1α expression is mainly regulated by post-translational modifications and protein stability [3, 14], other pathways have been found to regulate HIF1α expression, including transcription and translation [15]. In this study, we showed that ectopic expression of RBM38 decreased, whereas knockdown of RBM38 increased, the level of HIF1α protein under a hypoxic condition. Moreover, we found that knockdown of RBM38 enhanced HIF1α mRNA translation via binding to HIF1α 5′ and 3′UTRs. Together, we uncovered a novel mechanism by which HIF1α is regulated by the p53 pathway via RBM38.

HIF1α expression is regulated by RBM38 under a hypoxic condition 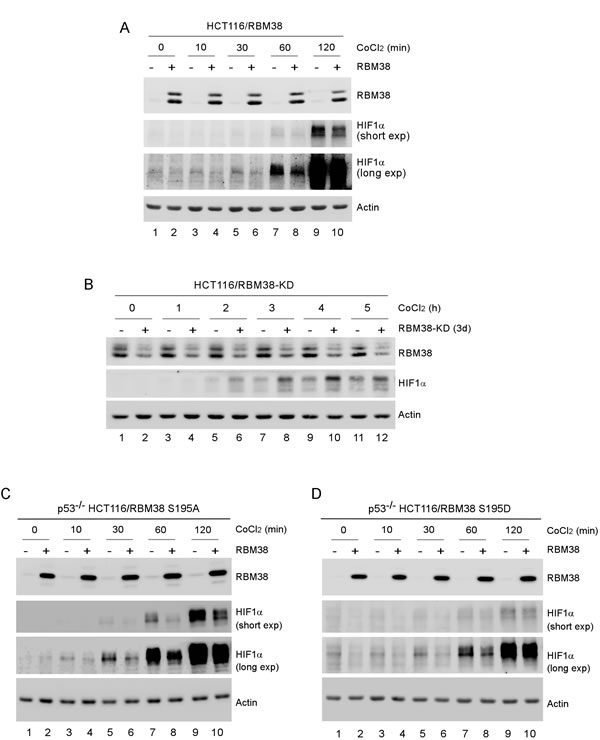 To confirm the regulation of HIF1α by RBM38 under a hypoxic condition, MCF7 and HCT116 cells were transduced with a lentivirus expressing RBM38 shRNA or luciferase shRNA for 3 d and then incubated under a hypoxia condition (~0.1% oxygen) for various times. As a control, the levels of p53 protein were measured and found to be increased by knockdown of RBM38 regardless of the condition of oxygen tension (Fig. 2A-B, p53 panels), consistent with our previous studies [9, 17]. Interestingly, we found that the levels of HIF1α in both MCF7 and HCT116 cells were increased upon knockdown of RBM38 under a hypoxic condition for 6 h, but little if any under the same condition for 3 h (Fig. 2A-B, compare lanes 3 and 5 with lanes 4 and 6, respectively). Since p53 is capable of destabilizing HIF1α protein through the ubiquitin-dependent proteasomal degradation pathway [9, 14], p53-null HCT116 and H1299 cells were used to rule out potential effects of wild-type p53 on RBM38-mediated HIF1α regulation. Indeed, we found that the levels of HIF1α protein were markedly increased by knockdown of RBM38 under the same hypoxic condition for both 3 and 6 h (Fig. 2C-D, compare lanes 3 and 5 with 4 and 6, respectively). Together, these data suggest that RBM38 is necessary for maintaining proper expression of HIF1α under a hypoxic condition. 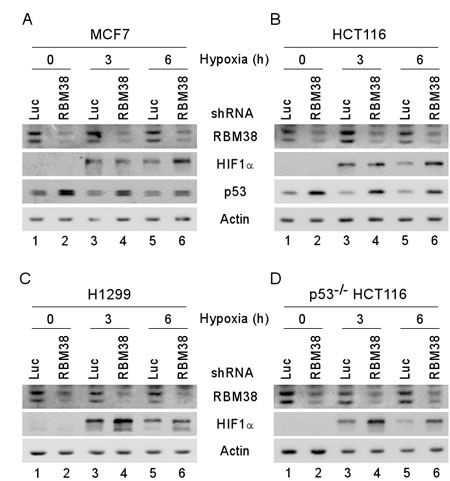 Figure 2: HIF1α expression is increased by knockdown of RBM38 under a hypoxic condition. MCF7 (A), HCT116 (B), H1299 (C), and p53-/- HCT116 (D) cells were transduced with a lentivirus expressing a control luciferase (Luc) shRNA or RBM38 shRNA, selected by puromycin for 3 d, and then exposed to hypoxia for 0, 3, or 6 h. Whole cell lysates were collected and the levels of RBM38, HIF1α, p53, or actin were determined by Western blot analysis. 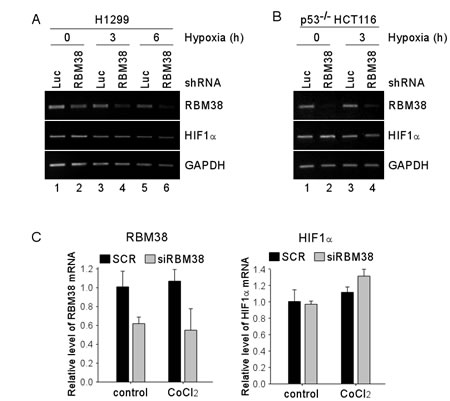 Figure 3: Knockdown of RBM38 has no effect on the level of HIF1α mRNA. (A-B) H1299 (A) and p53-/- HCT116 (B) cells were transduced with a lentivirus expressing a control luciferase (Luc) shRNA or RBM38 shRNA for 3 d, followed by exposure to hypoxia for 0-6 h for H1299 (A), and 0-3 h for p53-/- HCT116 (B) cells. Total RNAs were isolated and RT-PCR was performed to measure the levels of RBM38, HIF1α, and GAPDH transcripts. (C) H1299 cells were transiently transfected with scramble siRNA (SCR) or siRNA against Rbm38 (SiRBM38) for 48 h, followed by treatment with 500 µM CoCl2 for 3 h. Total RNAs were isolated and quantitative RT-PCR was performed in triplicates to measure the levels of RBM38, HIF1α, and GAPDH transcripts. The levels of RBM38 and HIF1α transcripts were normalized to that of the GAPDH transcript. The relative fold change for RBM38 (left panel) and for HIF1α (right panel) is the ratio of the transcript level in cells with knockdown of RBM38 versus that in cells transfected with a control scrambled siRNA. 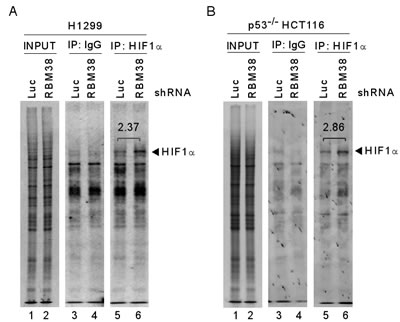 Figure 4: Knockdown of RBM38 enhances HIF1α expression through mRNA translation. 35S-metabolic labeling assay was performed with H1299 (A) or p53-/- HCT116 (B) cells. Cells were transduced with a lentivirus expressing a control luciferase (Luc) shRNA or RBM38 shRNA, selected by puromycin for 3 d, and then treated with 500 µM CoCl2 for 3 h, followed by labeling with 35S-methionine and 35S-leucine. Cell lysates were isolated and used for immunoprecipitation with anti-HIF1α (H1α67, Sigma) or non-immune mouse IgG. The samples from immunoprecipitation were separated in 8% SDS/PAGE and the protein signals were captured by autoradiography. 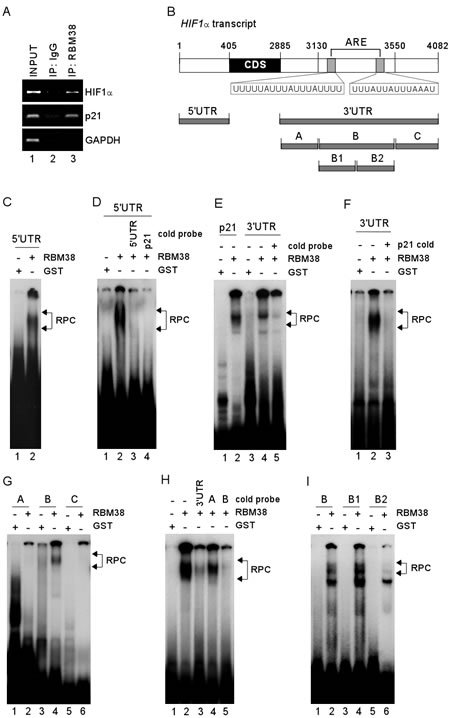 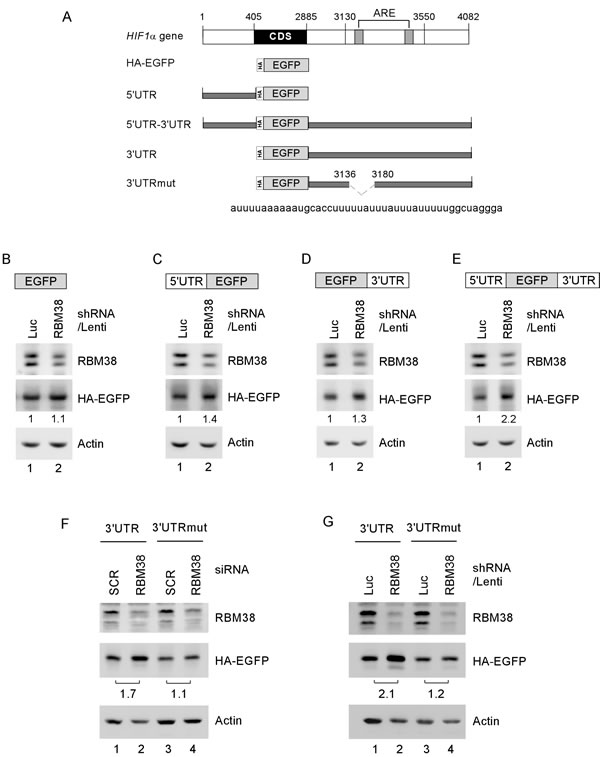 HIF1α plays a critical role in hypoxia to improve glycolysis, oxygen delivery, and angiogenesis for tumor cells [1, 3]. Although HIF1α is mainly regulated by VHL-mediated proteasomal degradation, it can be regulated by other post-transcriptional mechanisms [16]. Indeed, we found a novel mechanism by which HIF1α expression is regulated by RBM38 via mRNA translation. We also found that RBM38 directly binds to HIF1α 5′ and 3′UTRs. Additionally, an ARE element in HIF1α 3’UTR is recognized by RBM38. Importantly, we showed that both HIF1α 5’and 3’ UTRs are necessary and sufficient for RBM38 to regulate HIF1α mRNA translation. Since RBM38 inhibits the binding of eIF4E to HIF1α cap structure, we postulate that upon binding to HIF1α 5’ and/or 3’ UTRs, RBM38 may physically hinder the binding of eIF4E to HIF1α 5’ cap structure. Alternatively, since RBM38 physically interacts with eIF4E [9]. We hypothesize that upon binding to HIF1α transcript, RBM38 and eIF4E get close together and interact with each other on the HIF1α transcript, which then prevents eIF4E from associating with HIF1α 5’-cap.

HIF1α accumulation in tumors can be induced by various stress signals, including hypoxia in tumor microenvironment, loss of a tumor suppressor, or oncogene activation [14, 19]. Increased HIF1α abundance promotes tumor growth and angiogenesis [1, 20]. In this study, we showed that RBM38 deficiency leads to increased expression of HIF1α. Thus, an obvious question would be: is there a functional connection between RBM38 and HIF1α? RBM38 is found to be overexpressed in several types of cancers [9, 21-29]. In addition, loss of RBM38 in mouse embryonic fibroblasts leads to premature senescence through activation of p53 [9]. Here, we showed that RBM38 deficiency leads to increased accumulation of HIF1α under a hypoxic condition. These results suggest that both RBM38 overexpression and deficiency lead to tumor promotion. Thus, further studies are needed to address the functional link between RBM38 and HIF1α under the hypoxic tumor microenvironment, which may explain how tumors thrive under a hypoxic condition. Additionally, since RBM38 expression and phosphorylation may be altered under a hypoxic condition, future studies are needed to address whether the binding of RBM38 to HIF1α UTRs is affected by hypoxia.

To generate EGFP expression vector carrying HIF1α 5′ and/or 3′UTRs, a DNA fragment containing EGFP coding region was amplified using pEGFP-N2 vector as a template with forward primer including HA-tag, EGFP-BamHI-HA-F, and reverse primer, EGFP-R. The primers for cloning are listed in Table 1. The PCR product was digested with BamHI and NotI and cloned into pcDNA3 vector (Invitrogen). The vector was designated as pcDNA3-HA-EGFP. A fragment containing HIF1α 5′ or 3′UTR was amplified using cDNA from H1299 cells as template with forward primer, HIF1α-5′UTR-KpnI-F or HIF1α-3′UTR-NotI-F, and reverse primer, HIF1α-5′UTR-BamHI-R or HIF1α-3′UTR-XhoI-R. The PCR products were digested with KpnI and BamHI for HIF1α-5UTR or NotI and XhoI for HIF1α-3′UTR and cloned into pcDNA3/HA-EGFP vector. The vectors were designated as pcDNA3/HIF1α-5′UTR/HA-EGFP and pcDNA3/HA-EGFP/HIF1α-3′UTR. To generate pcDNA3/HIF1α-5′UTR/HA-EGFP/HIF1α-3′UTR, pcDNA3/HIF1α-5′UTR/HA-EGFP vector was digested with KpnI and BamHI. The digested DNA fragment containing HIF1α-5′UTR was cloned into pcDNA3/HA-EGFP/HIF1α-3′UTR. The HIF1α-3’UTR deletion mutation was generated from two cDNA fragments using two-steps PCRs with HIF1α-3′UTR-NotI-F and HIF1α-3′UTR-XhoI-R, followed by subcloning into pcDNA3-HA-EGFP. The fragment 1 was amplified using primers HIF1α-3′UTR-NotI-F and HIF1α-3′UTR-mut-R whereas the fragment 2 was produced using primers HIF1α-3′UTR-mut-F and HIF1α-3′UTR-XhoI-R.

Table 1: Primers for RT-PCR and cloning

Human breast cancer MCF7 cell line, Human colorectal carninoma HCT116 cell line, and human non-small cell lung carcinoma H1299 cell line were obtained from the American Type Culture Collection (ATCC, Manassas, VA). p53-/- HCT116 cell line was used as described [30]. Cell lines were cultured in DMEM (Invitrogen) supplemented with 10% fetal bovine serum (Hyclone) and maintained at 37°C in a humidified 5% CO2. p53-null HCT116 cell lines, in which RBM38 can be inducibly knocked down or in which RBM38, RBM38-S195A, or RBM38-S195D can be inducibly expressed, were generated and cultured as previously described [7, 10, 17]. Cells were subjected to hypoxia (0.1 to 1%) by exposure to 10% H2/5% CO2/balanced N2 at 37°C in Forma 1025/1029 Anaerobic Chamber (Thermo Scientific).

Cells were cultured in various conditions and whole cell lysates were prepared with 2X SDS sample buffer. Whole cell lysates were separated in 8 to 12% SDS-PAGE, transferred to a nitrocellulose membrane, and incubated with primary and secondary antibodies, followed by enhanced chemiluminescent detection. The antibodies used in this study are anti-HIF1α (BD Biosciences), anti-RBM38 (purified rabbit polyclonal), anti-p53 (monoclonal anti-serum, DO-1), and anti-Actin (Sigma).

All probes were labeled by in vitro transcription using a DNA fragment containing T7 promoter and various region of HIF1α 5′ or 3′UTR. Briefly, 500 ng of purified PCR product was incubated with 50 µCi of α-32P-UTP, 0.5 mM each of NTP (A, G, C), 20 unit of T7 RNA polymerase (Ambion) in 20 µl of reaction at 37°C for 1 h, followed by DNase I (1 unit) treatment for 15 min. The reaction mixture was purified by Sephadex G-50 column to remove unlabeled free nucleotides and the radioactivity of probes was measured by a scintillation counter. REMSA was carried out with a modified protocol as previously described [8]. Briefly, 250 nM of RBM38 recombinant protein, 100 µg/ml of yeast tRNA, and 50,000 CPM 32P-labeled RNA probe were mixed in 20 µl of reaction buffer (10 mM Tris-Cl, pH 8.0, 25 mM KCl, 10 mM MgCl2, 1 mM DTT) at 25°C for 25 min. RNA/protein complexes were digested with 100 U RNase T1 at 37°C for 15 min and then separated in 7% native PAGE gel. RNA-protein complexes were visualized by autoradiography.

Cells seeded in a 6-cm plate (6 x 106 cells) were washed twice with PBS and incubated in DMEM without L-methionine and L-cysteine for 1 h. Cells were then labeled with 100 µCi/ml Easy Tag EXPRESS 35S Protein Labeling Mix (PerkinElmer) for 30 min. Cell lysates were isolated and used for immunoprecipitation with anti-HIF1α (H1α67, Sigma) or non-immune mouse IgG. The samples from immunoprecipitation were separated in 8% SDS/PAGE. The gel was dried on 3-MM paper and the protein signals were captured by autoradiography.