Impact of age on the survival of patients with liver cancer: an analysis of 27,255 patients in the SEER database

Background & Aims: The risk of liver cancer (LC) is regarded as age dependent. However, the influence of age on its prognosis is controversial. The aim of our study was to compare the long-term survival of younger versus older patients with LC.

Methods: In this retrospective study, we searched Surveillance, Epidemiology, and End-Results (SEER) population-based data and identified 27,255 patients diagnosed with LC between 1988 and 2003. These patients were categorized into younger (45 years and under) and older age (over 45 years of age) groups. Five-year cancer specific survival data was obtained. Kaplan–Meier methods and multivariable Cox regression models were used to analyze long-term survival outcomes and risk factors.

Results: There were significant differences between groups with regards to pathologic grading, histologic type, stage, and tumor size (p < 0.001). The 5-year liver cancer specific survival (LCSS) rates in the younger and older age groups were 14.5% and 8.4%, respectively (p < 0.001 by univariate and multivariate analysis). A stratified analysis of age on cancer survival showed only localized and regional stages to be validated as independent predictors, but not for advanced stages.

Conclusions: Compared to older patients, younger patients with LC have a higher LCSS after surgery, despite the poorer biological behavior of this carcinoma.

Liver cancer (LC) is the fifth most common malignant cancer in men and the seventh in women, and is ranked as the third leading cause of cancer-related deaths globally [1]. Primary liver cancer can usually be classified histologically as hepatocellular carcinoma (HCC), intrahepatic cholangiocarcinoma (ICC), or combined HCC and ICC [2]. This malignancy exhibits a remarkable gender disparity in male patients [3]. Over the last few years, accumulating evidences has suggested that the incidence of LC continues to increase [4]. In 2013, an estimated 30,640 adults (22,720 men and 7920 women) in the United States were diagnosed with primary liver cancer [5]. The incidence of LC is also increasing rapidly in Asian countries and Asians have been affected twice as much than Africans [6]. Generally, LC is considered as a malignancy influencing mainly those aged 65 and older, with 74% of cases occurring in men [7].

Age has a prognostic implication in many solid cancers. Chen et al. reported that age may play a paradoxical role on the prognosis of HCC [8]. Young patients with LC are considered to have a poorer prognosis, since they exhibit an advanced tumor stage and poor pathologic grading [9, 10]. However, some studies have argued that while young LC patients have unfavorable clinicopathologic characteristics, they have a better long-term survival than elderly patients [11, 12]. These varying results on LC in young patients may due to limited sample sizes or single-institution experiences. To further clarify the issue of age on LC prognosis, Surveillance, Epidemiology, and End Results (SEER) population-based data were analyzed in our study.

Table 1: Characteristics of Patients from SEER Database by age 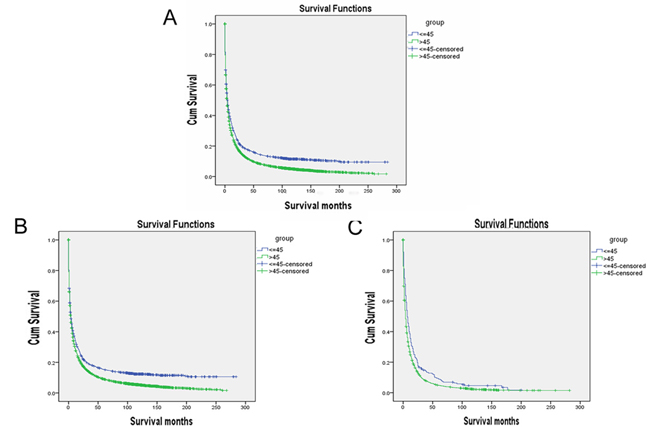 *including other (American Indian/AK Native, Asian/Pacific Islander) and unknowns.

*including other (American Indian/AK Native, Asian/Pacific Islander) and unknowns.

Association of age and cancer survival on different stages: a stratified analysis

The age-adjusted rates of LC increased two-fold from the mid-1980s to the late 1990s. As incidence rates increased, the distribution of LC has shifted from elderly patients toward relatively younger ones [6]. Young patients with gastric and breast cancer have a poorer prognosis than elderly ones [20, 21]. Conversely, young colorectal and thyroid cancer patients have a better long-term survival [22, 23]. Various studies have also reported that age plays a paradoxical role on the prognosis of HCC [8]. Cho et al. demonstrated that young patients had poorer survival rates than elderly patients [24]. This reduction in survival resulted from a more advanced tumor stage at diagnosis, despite the fact that they had better liver function. These results were confirmed by Shimada et al. [25]. In addition, young patients tended to exhibit larger tumor sizes and poorer differentiation compared with older ones [26]. Yang et al. found that women under 55 years had a superior survival to men, which confirmed the protective role of estrogens [27]. However, our study showed that, regardless of sex, the younger group had a better 5-year LCSS than the older age group (14.5% and 8.4%, respectively). As younger patients might have poorer biological behavior, this may be compensated by better liver function, which contributes to longer survival. Moreover, it is well known that, compared to highly and moderately differentiated tumors, poorly or undifferentiated tumors and cholangiocarcinoma have a poorer prognosis. In our study, we also confirmed that the 5-year LCSS of poor and undifferentiated tumors, and cholangiocarcinoma was 7.0% and 5.1%, respectively.

Table 4: Univariate analysis of Age on LCSS based on different stages

In this cohort, we found more patients with poor and undifferentiated grading, more cholangiocarcinoma, and more patients with an advanced stage in the younger groups. Univariate analysis showed that young patients had a better 5-year LCSS in localized, regional, and distant stages compared with the older age group, but this failed to reach statistical significance in multivariable Cox regression models of distant stages (P = 0.302). A total of 1795 younger LC patients and 19849 older ones were included in our study, the largest sample size up to now. The fact that this analysis was based on a large sample made our results more convincing. Due to the advanced stage in the younger groups, these patients more frequently underwent major hepatectomy. No significant difference was observed between groups [28]. Young patients have a better survival, which is compensated by better liver function, more aggressive therapy, and faster recovery. Adjuvant chemotherapy is well tolerated in young patients and significantly reduces the risk of tumor recurrence. Although age was not an independent prognostic factor when groups were matched for distant stage, it could be explained by the biological behavior of the tumor. Adjuvant chemotherapy or other therapies have some limitations on prolonging survival in distant stages. Therefore, aggressive treatment is an option for younger LC patients to improve survival.

Although this study is based on a large population and multicenter analysis, there are still limitations. First, its retrospective nature may affect the analysis, due to bias. Second, the information on cancer-specific death may not be precise in the SEER database. Furthermore, the SEER database lacks important information regarding LC predisposing factors (e.g., viral hepatitis, non-alcoholic fatty liver disease, or cirrhosis), cancer treatment (chemotherapy, quality of surgery), as well as alpha-fetoprotein levels. Postoperative morbidity, which was not provided by the SEER database, may have contributed to poor survival in the older age group. Moreover, these potential confounding factors may differ according to age and may not have been adjusted by our analyses, which affects the strength of our results. Importantly, only patients who underwent surgical resection for LC were included in the database, and as such, these patients did not represent LC patients with unresectable tumors. Despite these limitations, our study was based on a large population and multiple centers, and is therefore convincing.

In conclusion, compared to older patients, younger patients with LC (age 45 or below) have a higher LCSS after surgery despite the poorer biological behavior of their carcinomas.

The SEER Cancer Statistics Review (http://seer.cancer.gov/data/citation.html), a report on the most recent cancer incidence, mortality, survival, prevalence, and lifetime risk statistics, is published annually by the Data Analysis and Interpretation Branch of the National Cancer Institute, (Bethesda, MD, USA). The current SEER database consists of 17 population-based cancer registries that represent approximately 26% of the population in the United States. SEER data contain no identifiers and are publicly available for studies of cancer-based epidemiology and survival analysis. The National Cancer Institute’s SEER*Stat software (Surveillance Research Program, National Cancer Institute SEER*Stat software, www.seer.cancer.gov/seerstat) (Version 8.1.5) was used to identify patients whose pathologic diagnosis was LC, based on International Classification of Diseases for Oncology (ICD-O) topography codes (C22.0 and C22.1) between 1988 and 2003, for liver and intrahepatic bile duct cancers, respectively. Morphology codes for liver cancer were expanded to include the following histologies: 8170, 8171, 8172, 8173, 8174, 8175, 8160, and 8180 (i.e., NOS, fibrolamellar, scirrhous, spindle cell variant, clear cell type, pleomorphic type HCC, cholangiocarcinoma, and combined hepatocellular and cholangiocarcinoma). Only patients who underwent surgery with an age at diagnosis between 18 and 85 years were included. Patients were excluded if they had incomplete staging, distant metastasis (M1), no evaluation of histological type, or follow up. Age, sex, race, histologic type, stage, tumor grade, tumor size, and liver cancer specific survival (LCSS) was assessed. Adjuvant chemotherapy was not evaluated as the SEER registry does not include this information. The primary endpoint of the study is LCSS, which was calculated from the date of diagnosis to the date of cancer specific death. Deaths were treated as events and deaths from other causes were treated as censored observation.

This study was based on public data from the SEER database; we obtained permission to access research data files with the reference number 11928-Nov2013. There was no use of human subjects or personal identifying information in this study. The study did not require informed consent, and was approved by the Review Board of Nanjing Medical University, Nanjing, China.

The association of age (young and elderly) with clinicopathologic parameters was analyzed by the chi-squared (χ2) test. Continuous variables were analyzed using the Student’s t-test. Survival curves were generated using Kaplan–Meier estimates; differences between the curves were analyzed by log-rank test. Multivariable Cox regression models were built for analysis of risk factors for survival outcomes. All statistical analyses were performed using the statistical software package SPSS for Windows, version 17 (SPSS Inc., Chicago, IL, USA). Results were considered statistically significant when a two-tailed test of a p value of less than 0.05 was achieved.

This work was supported by grants from the National Natural Science Foundation for Distinguished Young Scholars (81225017 to B.S.), the National Basic Research Program of China (2012CB910800 to B.S.), and the National Natural Science Foundation (81302106 to J.H.; 81201528 to R.J.). This work was also supported in part by the program for the Development of Innovative Research Team in the First Affiliated Hospital of NJMU and the Priority Academic Program of Jiangsu Higher Education Institutions. B.S. is Yangtze River scholars Distinguished Professor.