BRCA1 and BRCA2 are high-penetrance inherited genes; different founder mutations have been reported in various areas and races. By using trial registration data from the Japanese hereditary breast and ovarian cancer syndrome (HBOC) consortium, we aimed to explore the clinicopathological characteristics of breast cancer patients with the Japanese founder mutation BRCA1 L63X.

We found 88 BRCA1 carriers, 76 BRCA2 carriers, and one carrier of both BRCA1 and BRCA2. Of 46 independent BRCA1 mutations, the BRCA1 L63X mutation was detected in 26 patients. We observed a significant difference in the proportion of triple-negative breast cancer phenotype among 88.9%, 72.5%, and 26.8% of BRCA1 L63X mutation, BRCA1 mutation, and BRCA2 mutation carriers, respectively (p < .001). Additionally, significant differences were also observed in nuclear grade in the resultant breast cancer between the groups (p < .001).

A high proportion of Japanese HBOC patients showed the BRCA1 L63X mutation, and the clinical characteristics of breast cancer in patients with this mutation might differ from those in patients with other BRCA1 or BRCA2 mutations, in terms of the subtype and nuclear grade of the resultant cancer.

The number of breast cancer patients is increasing every year, and the incidence of breast cancer is the highest (1 in 11 [9%]) among Japanese women according to the Center for Cancer Control and Information Services of the National Cancer Center [1]. In general, approximately 5%–10% of all breast cancers develop because of a genetic predisposition [2, 3].

Individuals with hereditary breast and ovarian cancer syndrome (HBOC), which is caused by germline pathogenic variants of BRCA1 or BRCA2, have an increased risk for breast cancer, ovarian cancer, prostate cancer, and pancreatic cancer [4–8]. In hereditary cancer, racial differences are important. For example, in persons of Ashkenazi Jewish heritage, three germline variants are observed: c.68_69delAG (BRCA1), c.5266dupC (BRCA1), and c.5946delT (BRCA2) [9]. As many as one in 40 Ashkenazi Jews have one of these three variants. A founder mutation is defined by the National Cancer Institute as “a gene mutation observed with high frequency in a group that is or was geographically or culturally isolated, in which one or more of the ancestors was a carrier of the mutant gene” [10]. Some reports on founder mutations of HBOC have been published from studies performed in Asia. From the Korean Hereditary Breast Cancer study [11] performed in Korea, one BRCA2 pathogenic variant (c.7480C>T) was identified as the Korean founder mutation using data from over 3,000 breast cancer patients [12]. Furthermore, using data from 651 breast cancer patients in Southern China, one BRCA1 pathogenic variant (c.981_982delAT) and three BRCA2 pathogenic variants (c.3109C>T, c.7436_7805del370, and c.9097_9098insA) were analyzed and reported as Chinese founder mutations [13]. In Japan, only a few reports on founder mutations of HBOC have been published [14–16]. The c.188T>A (307T>A) variant, which causes the amino acid change L63X, was reported as the Japanese founder mutation in breast cancer and ovarian cancer. BRCA1 L63X mutation was detected in Eastern Japan according to a previous report [15]. However, the data of these studies were not obtained from large study populations. 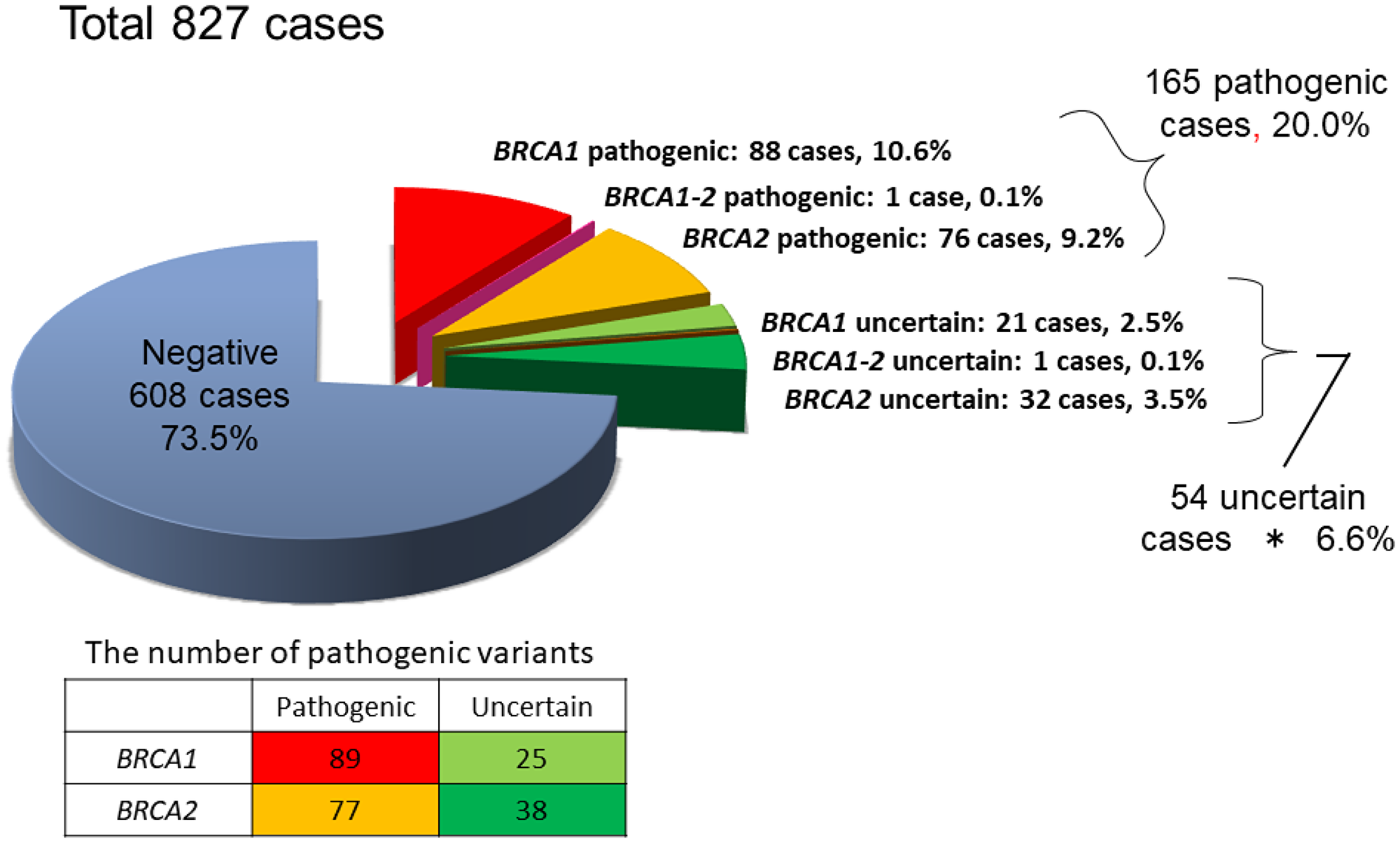 aExcluding one carrier of both the BRCA1 (L63X) and BRCA2 mutations.

BRCA1 was discovered in 1994 and BRCA2 in 1995 [18, 19]. In the United States, BRCA1/2 clinical testing started in 1996. However, this clinical testing started in 2006 in Japan, although testing had been performed in research studies. Compared to Western countries, because an HBOC medical treatment system started later in Japan, only a few reports on HBOC from Japan were obtained. Sugano et al. [20] reported that 36 of the 135 proband patients were BRCA1/2 mutation carriers including five BRCA1 L63X mutation carriers. It also described the prevalence and clinical characteristics of HBOC in Japan in 2008. Nakamura et al. [21] reported that 80 of the 260 proband patients were BRCA1/2 mutation carriers including 10 BRCA1 L63X mutation carriers and described the prevalence and differentiation of HBOC. Our study included the largest number of HBOC patients reported in Japan. The BRCA1 L63X mutation, which was reported only in Asians in the Breast Cancer Information Core database [22], was identified as a Japanese founder mutation of ovarian cancer in haplotype analysis. In our study, we used multi-facility trial registration data; thus, we have not performed haplotype analysis, but it is suggested that it is a common ancestor. Considering that it is the most frequent HBOC founder mutation among Japanese people, previous analytical studies did not have large sample sizes (Table 4). In this study, we aimed to confirm that a high proportion of Japanese HBOC patients showed the BRCA1 L63X mutation.

Table 4: Comparison of reports on the BRCA1 L63X mutation

Considering that hereditary cancer differs according to ethnicity, a founder mutation is an important element and leads to questions such as “How many founder mutations are observed in a related gene?” and “What kinds of effects does the genotype of a founder mutation have on cancer phenotype?” Identification of a founder mutation and knowledge of its prevalence in each population provides important information for genetic counseling, cancer risk assessment, and the development of a cost-effective screening strategy. Many hypotheses concerning Japanese ancestry have been proposed. Recently, using the Y chromosome, which does not undergo genetic recombination, haplotype research, and a genome-wide single nucleotide polymorphism database, the Japanese were believed to be a mixed population that descended from the Jomon people (hunters), who originated in Southeast Asia 10,000 years ago and settled in the Japanese archipelago, and the Yayoi people (farmers), who emigrated from the East Asian continent 2,000 to 3,000 years ago [22–26]. The Japanese population is the largest in the world to have inherited the haplotype of the Jomon people, which is not seen in Chinese and Korean populations [27]. This might be because Japan could be considered as an island country at the outskirts of the eastern countries. As a result, we could consider that the frequency of the BRCA1 L63X mutation might be very high in the Japanese population (Table 5). However, the Japanese population might be mixed: one c.7480C>T BRCA2 variant (the Korean founder mutation) and one c.470-471delCT BRCA1 variant (the Southern Chinese founder mutation) were observed in this registry [16].

Table 5: Proportions of founder mutations according to race

According to the Consortium of Investigators of Modifiers of BRCA1/2, regarding the pathology of breast cancer with BRCA1/2 mutations [32], triple-negative breast cancer accounted for 69% of BRCA1 mutations and 16% of BRCA2 mutations, and the nuclear grades (grade 1, grade 2, and grade 3 [%]) were 3%, 20%, and 77% for BRCA1 mutations and 7%, 43%, and 50% for BRCA2 mutations, respectively. Although the pathological features of BRCA1 breast cancer and BRCA2 breast cancer reported in our study were similar to that of Western studies, the rate of triple-negative breast cancer was very high (89%) in the BRCA1 L63X mutation group. The proportion of patients with triple negative breast cancer among those who were BRCA1/2 negative in this study was 28.9% (173/597), which is higher than that of 15.4% found in the registered data of the Japan Breast Cancer Society [33]. The triple negative subtype appeared to be a part of the BRCA genetic testing criteria; however, the proportion of patients with triple negative breast cancer in those with an L63X and BRCA1 positive status in our study was much higher than that in those who were BRCA 1/2 negative. This trend was also seen in research published overseas. Because of modifiers (including genetic background and environmental factors), the characteristics of breast cancer harboring a BRCA1/2 mutation in the Japanese population might be different from that of other races. Hence, we need to create a Japanese HBOC database and elucidate the realities of HBOC breast cancer in Japan.

The association between the type and location of BRCA1 and BRCA2 mutations was published in 2015 by Rebbeck et al. [34], and they identified that breast cancer cluster regions (BCCR) were locations where carriers had a tendency to develop breast cancer mutations. The BRCA1 L63X mutation is located in the putative BCCR1 region, which has been reported in the juvenile-onset region in this study [34]. However, in this study, data obtained from the Asian population entailed that only 0.2% of individuals were BRCA1 carriers.

Recently, germline pathogenic variants of 11 breast cancer genes were explored in Japanese breast cancer patients using the samples from Biobank Japan, which is a multi-institutional hospital-based registry that collects DNA from peripheral blood leukocytes of patients with various common diseases, including breast cancer regardless of the possibility for HBOC [35]. They also found recurrent BRCA1 L63X founder mutation in BRCA1 pathogenic variants (26/102: 26% OR = 20.8) in the unselected breast cancer patients. This tendency might be found not only in East Japan but also in Japan as a whole.

In this trial registration, some selection bias might have occurred. Because the registration committee members of three hospitals belonged to the breast cancer division, we might have had a tendency to register more breast cancer patients than ovarian cancer patients. In this registration, although most patients matched the criteria for genetic testing according to the National Comprehensive Cancer Network guidelines [36], no standards were indicated in the registry. This might have affected the comparison studies including those on the age of onset, development and type of breast and ovarian cancer, clinical characteristics of breast cancer, and family cancer history.

In conclusion, the founder mutation BRCA1 L63X was observed in approximately 30% of BRCA1 carriers and is frequently observed among Japanese patients. This could be attributed to the fact that Japan is an island. The clinical characteristics of breast cancer in patients with the BRCA1 L63X mutation might not differ from those caused by other BRCA1 or BRCA2 mutations, except the subtype and nuclear grade of the resultant cancer. Further investigation is required to appropriately validate and obtain the data. Hence, we started a nationwide registration in March 2016 [37].

This investigation has been conducted in accordance with the ethical standards, the Declaration of Helsinki, and national and international guidelines. This study was approved by the Ethical Review Boards of the Japanese HBOC Consortium and each medical institution. Informed consent has been obtained in principle [16]. The Japanese HBOC consortium was established in 2012, following another study conducted by the Japanese Breast Cancer Society (2010–2012). This consortium aimed to raise awareness of HBOC in Japan and to provide an effective healthcare system for HBOC patients and their families. Their activities included constructing the Japanese HBOC database, promoting educational activities about HBOC, and developing HBOC guidelines and research. At first, for constructing the Japanese HBOC database, a trial registration was conducted by the registration committee members of four hospitals, namely, Hoshi General Hospital (Fukushima), Showa University Hospital (Tokyo), Cancer Institute Hospital (Tokyo), and St. Luke’s International Hospital (Tokyo) (Figure 2). We registered patients who underwent genetic testing at these four hospitals [16]. 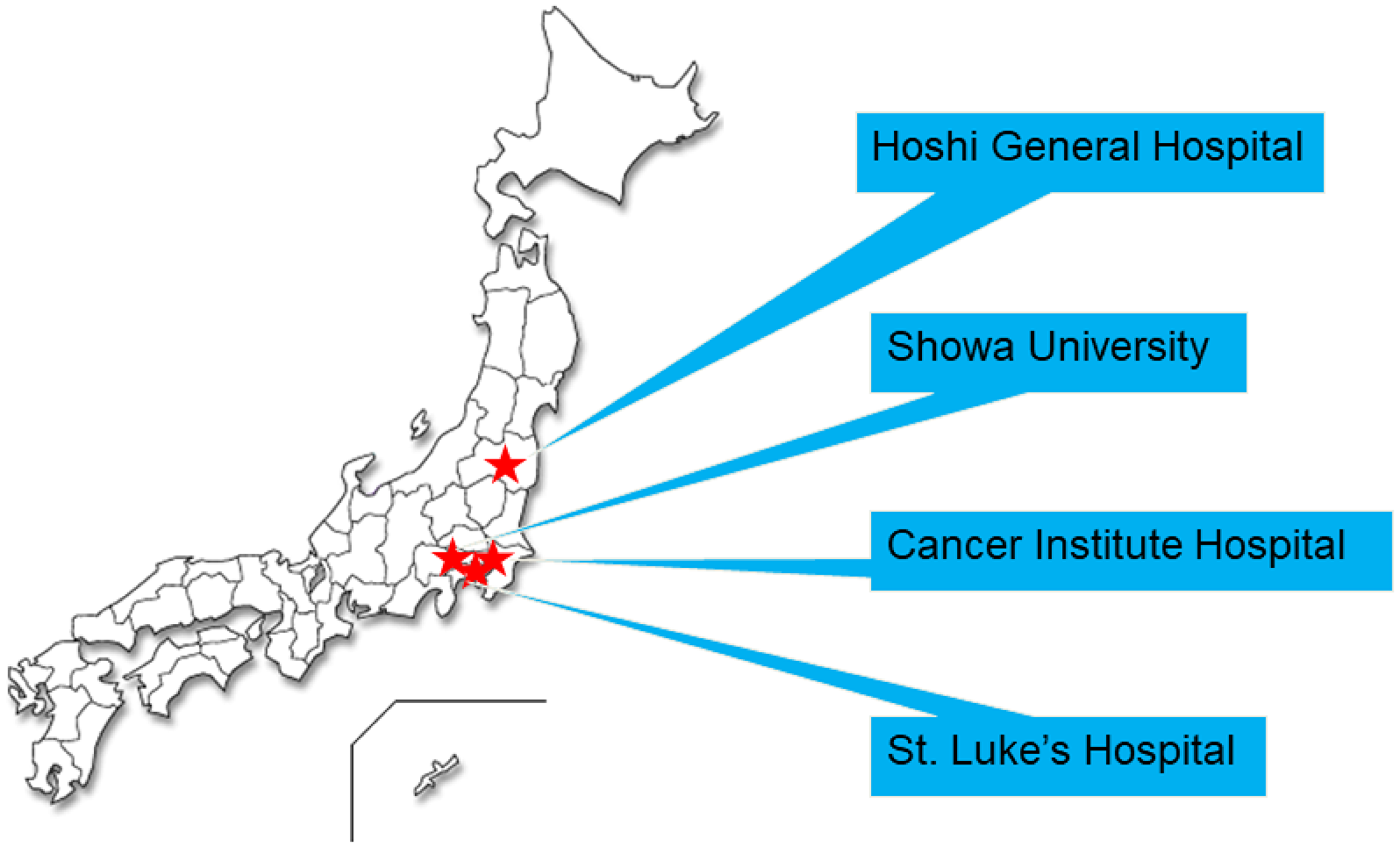 Figure 2: Trial registration committee members of four hospitals. As shown in the map, the four hospitals are located in Eastern Japan.

From all the registered patients, we evaluated the age at breast cancer onset, pathological features, clinical features, and family history of breast cancer patients, and we compared the difference between those with the BRCA1 L63X mutation, other BRCA1 mutations, and BRCA2 mutations using the Chi-square test.

Chie Watanabe, Shiro Yokoyama, Mayuko Inuzuka, and Junko Yotsumoto performed the experiments, analyzed the data, and reviewed the manuscript. Masami Arai and Seigo Nakamura organized the study and supervised the experiments. Reiko Yoshida designed the project and wrote the paper.

The authors acknowledge the members of the HBOC consortium.

This work was supported by Health, Labour and Welfare Sciences Research Grants (H26-policy for cancer general-012 for MA).