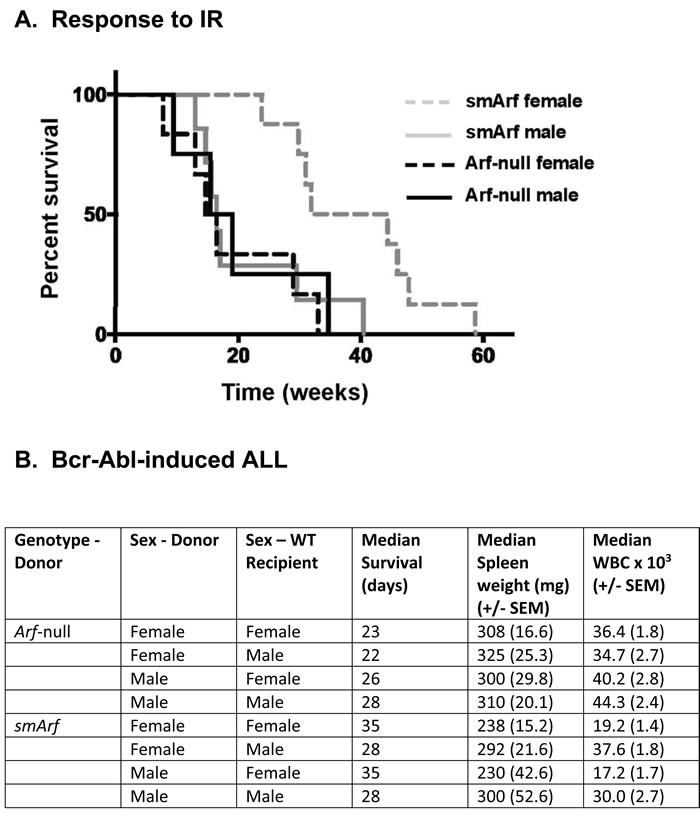 Figure 1: Differential responses of females and males to oncogenic challenge. A. Survival of neonatally irradiated mice of the indicated genotypes. Comparison of Kaplan-Meier survival curves was determined by Cox regression and Kruskal-Wallis test: smArf females versus any other group (p < 0.0005). All moribund animals developed sarcomas or lymphomas regardless of genotype or tumor latency. B. Development of acute lymphoblastic leukemia (ALL) after infusion of male or female donor Arf-null, Bcr-Abl-positive or smArf, Bcr-Abl-positive pro-B cells into syngeneic wild-type (WT, Arf +/+) recipients of the same or opposite sex. Eight individual cohorts each included 12 recipient WT mice that received 20 cells of the indicated donor genotypes per animal. Spleen weights and white blood cell (WBC) counts were determined at the time of sacrifice. Comparisons of WBC counts and spleen weights were generated using student’s two-tailed t test. Donor smArf, Bcr-Abl+ cells of either sex yielded significantly reduced spleen weights and lower peripheral WBC counts in female vs male recipients (each p < 0.05). No such differences in signs of disease development in recipients were observed following infusion of control Arf-null, Bcr-Abl+ donor cells. All statistical analyses were performed using R statistical software version 3.4.2. Ethical use of animals: All animal experiments were performed according to NIH guidelines and Institutional Animal Care and Use Committee-approved protocols.

To determine whether the sex of recipient animals might play any role in determining the rate of onset and clinicopathological signs of disease, Bcr-Abl+ pro-B cells from either Arf-null or smArf male or female donor mice were infused into healthy syngeneic WT recipients of either sex (Figure 1B). No significant differences in tumor development among cohorts were observed when recipient animals were infused with 2,000 male or female donor cells per mouse. However, because of the highly aggressive nature of this ALL model [4, 5], we infused limiting numbers of green fluorescent protein (GFP)-marked leukemia-initiating cells (only 20 per recipient mouse) in an attempt to magnify any differences between eight individual cohorts of 12 mice each (Figure 1B). Control Arf-null, Bcr-Abl+ donor cells of either sex still rapidly induced ALL in cohorts of wild-type male or female recipients without discernibly significant sex bias. In contrast, healthy syngeneic female mice receiving either male or female Bcr-Abl+, smArf donor cells exhibited an increased median survival of one week compared to male recipients; moreover, females developed less aggressive disease than males as manifested by comparatively reduced median spleen weights and lower peripheral white blood cell (WBC) counts (each p < 0.05) at the time of sacrifice (Figure 1B). All moribund mice succumbed to typical Bcr-Abl-induced ALLs marked by progressive lethargy, ruffling of fur, hunched posture, hind limb paralysis, domed heads, seizures, and respiratory distress [5]. Slower ALL progression in female mice tended to correlate with more consistent signs of CNS involvement. At necropsy, we documented hepatosplenomegaly and histological evidence of disseminated GFP+ B-cell infiltration in liver, spleen, lymph nodes, spinal cord, and meninges, as previously reported [5]. Therefore, the rate and severity of ALL development following injection of donor smArf leukemia-initiating cells depended on the sex of the recipient hosts with female mice exhibiting greater resistance to challenge by smArf donor cells of either sex.

Our findings beg the question of how the smArf protein, which lacks N-terminal residues required for p53 activation and is primarily localized to the inner matrix of (maternally inherited) mitochondria [1, 2], would mediate residual tumor suppressive effects in irradiated smArf female hosts that are not observed in the Arf-null setting. When overexpressed, smArf has been implicated in regulating autophagy [1], although smArf mice which encode the p15smArf protein from an engineered cellular Arf allele lacking the first methionine codon do not manifest overt defects in mitochondrial respiration in their cultured embryonic fibroblasts [2]. Nonetheless, defects in autophagy affecting other tissues might potentially lead to systemic effects that determine tumor susceptibility [6]. In contradistinction to BRCA genes that play general roles in homology-directed DNA repair and whose systemic inactivation predisposes to breast and ovarian cancers [7], smArf females are more resistant than their male counterparts to tumor formation in response to IR. In addition, because ALL triggered by Bcr-Abl+, smArf donor cells is attenuated in females versus males, non-tumor cell autonomous mechanisms might similarly influence disease progression after IR-induced mutagenesis or other oncogenic stress. We are unaware of similar sexual biases in the behavior of other tumor suppressor genes; indeed, the basis for sexual dimorphism stemming from either BRCA [7] or smArf insufficiency remains a mystery and demands further analysis.