DEPTOR was reported as a naturally occurring inhibitor of mTORC1 and mTORC2. The role of DEPTOR in the growth and survival of pancreatic cancer cells has not previously been determined. Here we report that while DEPTOR shows a cytoplasmic expression in both normal pancreatic acinar and islet cells in a patchy manner, its expression is reduced in PanIN1 and PanIN2 and completely lost in 100 out of 101 pancreatic ductal adenocarcinoma (PDAC) tissues. Ectopic DEPTOR expression in two pancreatic cancer cell lines, Panc-1 and Miapaca-2, caused a significant 1) suppression of anchorage-dependent growth in monolayer culture, particularly under conditions with growth factor deprivation; 2) decreased clonogenic survival, and 3) suppressed anchorage-independent growth in soft agar. These effects are attributable to moderate induction of apoptosis and growth arrest at the S and G2/M phases, in a cell line dependent manner. Furthermore, ectopic DEPTOR expression moderately inhibited mTORC1 activity, as demonstrated by reduced phosphorylation of S6K, S6, and 4E-BP1. Taken together, these data suggest that DEPTOR has a tumor suppressive activity against pancreatic cancer cells, and its loss of expression may contribute to pancreatic tumorigenesis.

DEPTOR is a recently identified mTOR binding protein that inhibits both mTORC1 and mTORC2 [1], the central regulators of cell metabolism, growth, proliferation, and survival [2–4]. In cell culture settings, DEPTOR mainly acts as a tumor suppressor, since DEPTOR loss activates mTORC1 and mTORC2 and promotes growth and survival of multiple cancer cell lines. However, in a subset of multiple myeloma cells, where DEPTOR was overexpressed, DEPTOR acts as an oncogene and survival factor, since DEPTOR inhibition of mTORC1 relieves the feedback inhibition from S6K1 to PI3K, boosting AKT activity for cancer cells survival [1, 2, 5]. We and others recently found that DEPTOR is a novel substrate of SCFβ-TrCP (SKP1, Cullins, F-box proteins) E3 ubiquitin ligase [6–8], the largest family of E3 ubiquitin ligases that regulates many biological processes via degrading the key regulators [9, 10]. Upon growth factor exposure, DEPTOR was phosphorylated at the β-TrCP binding motif (D-pS-G-X-X-pS) on codons 286-291 by RSK1/S6K1 kinases and then recognized by β-TrCP for targeted degradation by SCF E3, leading to mTOR activation [8] . We further showed that by degrading DEPTOR, SCFβ-TrCP regulates cell survival [8].

Pancreatic ductal adenocarcinoma (PDAC) is the fourth leading cause of cancer death in the United States and amongst the deadliest human malignancies with an approximate 5 year survival of 5% [11]. Mutational activation of the Kras oncogene occurs in 95% of cases, with inactivation of tumor suppressors, p53 and PTEN, and activation of PI3K-AKT-mTOR pathway occurring in ~50-60% of cases [12–16]. In addition, NFκB, a downstream mediator of mutant Kras signaling in PDAC [17, 18], was found to be constitutively activated in most primary pancreatic cancers and cell lines [19, 20], due partly to the overexpression of β-TrCP [21], a F-box protein of SCF E3 ligase that promotes degradation of IκB [22] to activate NFκB and DEPTOR to activate mTORC1/2 [6–8].

Although DEPTOR has been shown to inhibit mTOR activity and may act as a tumor suppressor in some cell culture settings [1, 2], it has not been previously tested whether and how DEPTOR plays a role in pancreatic cancer. Here we show that DEPTOR expression is gradually reduced in pancreatic preneoplastic lesions, and completely lost in 99% of pancreatic ductal adenocarcinoma tissues. Ectopic expression of DEPTOR in pancreatic cancer cells suppressed their growth in monolayer culture and in soft agar, and decreased clonogenic survival by inducing apoptosis and growth arrest, likely through inactivation of mTORC1 signal. Our study suggests that DEPTOR acts as a tumor suppressor in pancreatic cancer and its loss may contribute to the initiation and progression of pancreatic tumorigenesis.

Given the observation that DEPTOR expression was lost in PDAC tissues, we next determined whether ectopic DEPTOR expression would affect the growth of pancreatic cancer cells. We transfected FLAG-tagged DEPTOR cDNA, along with the empty pcDNA3 control, into two commonly used pancreatic cancer lines, Panc-1 and Miapaca-2. All resistant stable clones, after G418 selection, were pooled for Western blotting. As shown in Figure 2A, the levels of ectopically expressed DEPTOR were comparable to those of the endogenous DEPTOR in both Panc-1 and Miapaca-2 cells. We then measured the growth rate by ATP-lite proliferation assay for a 5-day period and found that in both cell lines, DEPTOR expression inhibited cell growth when cultured in normal medium containing 10% fetal bovine serum (Figure 2B&C). Growth suppression was more substantial if cells were cultured in serum starved condition with 1% FBS (Figure 2D&E). Thus, DEPTOR expression had negative impact on the growth of pancreatic cancer cells, particularly under nutrient-deprived conditions.

We further determined the ability of DEPTOR-overexpressing cells to grow in an anchorage independent manner in soft agar, which is a classic measurement of tumor cell phenotype. We found that again, DEPTOR expression significantly suppressed the formation of agar colonies (Figure 4A-D, with representative plates shown in A&B and quantitative data shown in C&D). Taken together, ectopic DEPTOR expression suppressed the growth of pancreatic cancer cells in all measures, indicating a tumor suppressive activity.

We then determined the nature of growth suppression using FACS analysis. Cells were grown in monolayer culture for up to 3 days with samples harvested at every 24 hrs. FACS profile revealed that DEPTOR ectopic expression caused a moderate induction of sub-G1 apoptotic population in both cell lines, particularly at later time points (Figure 5A), and also caused growth arrest at the G2/M for Panc-1 cells and the S for Miapaca-2 cells (Figure 5B). 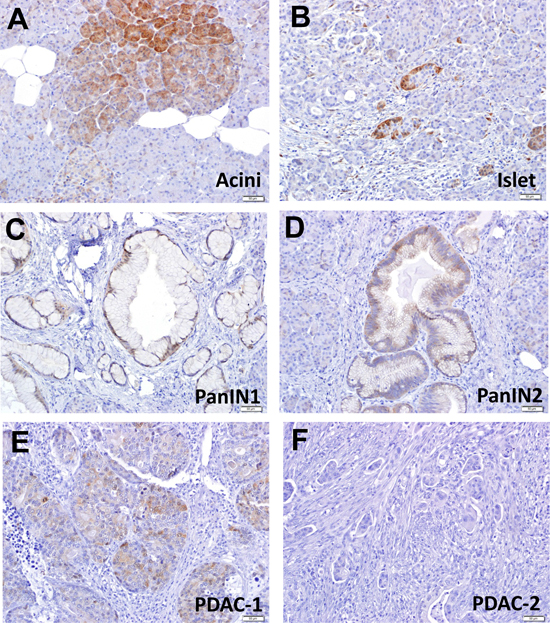 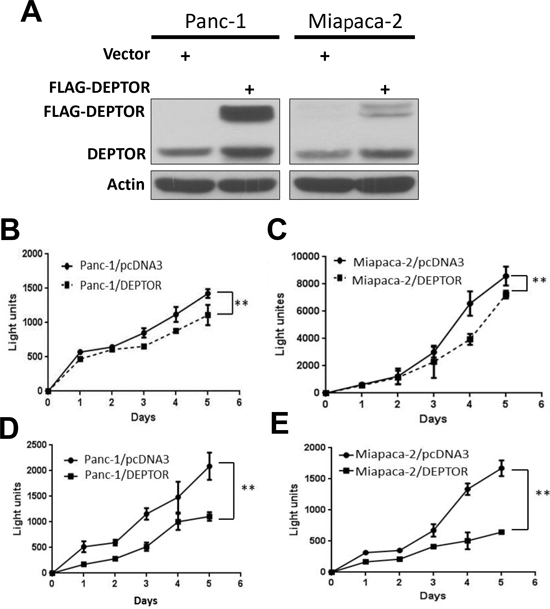 Figure 2: DEPTOR expression inhibits monolayer growth of PDAC cells. Panc-1 and Miapaca-2 cells were transfected with mammalian expressing vector encoding FLAG-DEPTOR, along with empty vector pcDNA3 control. Stable clones after G418 selection were pooled and subjected to IB using anti-DEPTOR antibody Ab (A). Cells were seeded and cultured in 96-well plates (1500/well) in triplicate for up to 5 days in DMEM with 10% FBS (B&C) or DMEM with 1% FBS (D&E). Cells were lysed every 24 hrs and subjected to ATP-lite proliferation assay. Shown is X ± SEM of light unit (n = 3). Student t test was performed, **, p < 0.01.

Several prior studies have reported conflicting correlations between DEPTOR expression and patient prognosis or disease status in human malignancies. One study showed that DEPTOR overexpression correlates with poor prognosis in differentiated thyroid carcinoma [23], whereas another study revealed that DEPTOR expression negatively correlates with tumor progression in colorectal cancer [24]. Here we show that DEPTOR expression is gradually lost during pancreatic tumorigenesis, and completely lost in PDAC tissues. We further showed that ectopic expression of DEPTOR at the level comparable to the endogenous one suppresses the growth of pancreatic cancer cells in monolayer culture, in clonogenic survival and in soft agar likely due to moderate induction of apoptosis and growth arrest at the S or G2/M phases of cell cycle. Interestingly, we found that while DEPTOR overexpression moderately inactivates mTORC1, it activates PI3K/AKT as well, which was also seen in other model systems [8, 25]. The fact that DEPTOR ectopic expression suppresses the growth of pancreatic cancer cells indicates that mTORC1 inactivation out-competes AKT activation. Finally, it is noteworthy that growth suppression by ectopic DEPTOR expression may also be mediated by other yet-to-be identified mechanism(s) in addition to modulation of mTOR pathway. Taken together, our study provides experimental evidence that DEPTOR plays a tumor suppressive role in pancreatic cancer cells and loss of DEPTOR expression could contribute to pancreatic tumorigenesis. 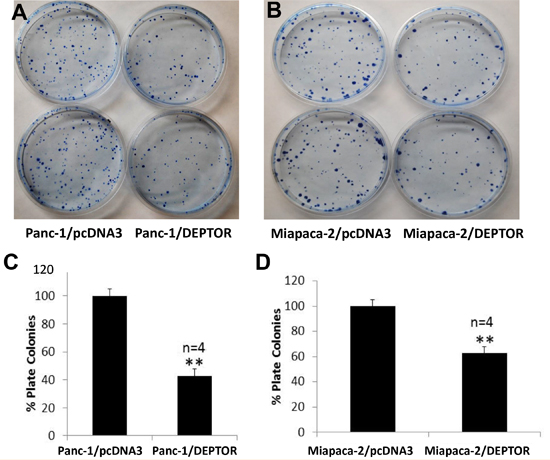 Figure 3: DEPTOR expression inhibits clonogenic survival of PDAC cells. Single cell suspension of Panc-1 and Miapaca-2 cells, stably expressing FLAG-DEPTOR were seeded, along with the vector control cells, into 60-mm dishes (600/dish) in DMEM with 10% FBS and grown for 10-14 days. Colonies (≥ 50 cells) were counted and plates were photographed (A&B). Quantified results were expressed as percentage to the vector control, setting at 100% (C&D). Shown is X±SEM of light unit (n = 4). Student t test was performed, **, p < 0.01. 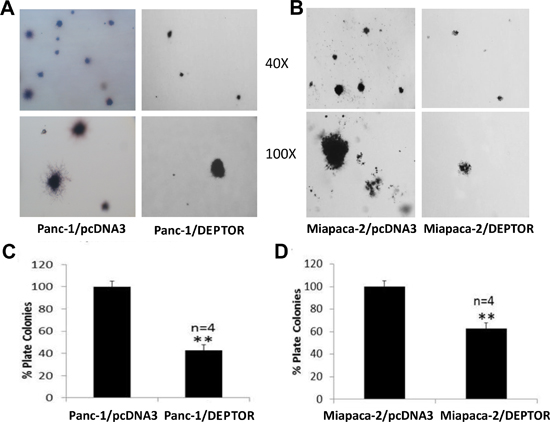 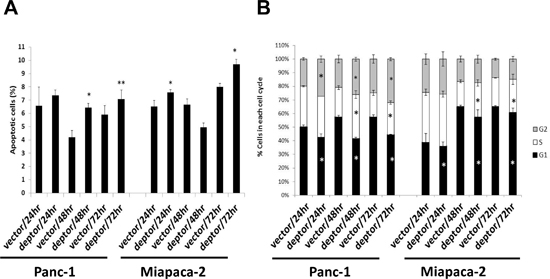 Figure 5: DEPTOR expression moderately induces apoptosis and growth arrest of PDAC cells. DEPTOR ectopically expressing Panc-1 and Miapaca-2 cells were seeded, along with the vector control cells, into 60-mm dishes and cultured for up to 72 hrs at DMEM with 10% FBS. Every 24 hrs post seeding, cells were harvested and prepared for FACS analysis. Sub-G1 population was used to calculate % of apoptotic cells (A). The remaining population was gated for each phase of cell cycle (B). Shown is X ± SEM (n = 2). Student t test was performed, *, p < 0.05; **, p < 0.01. 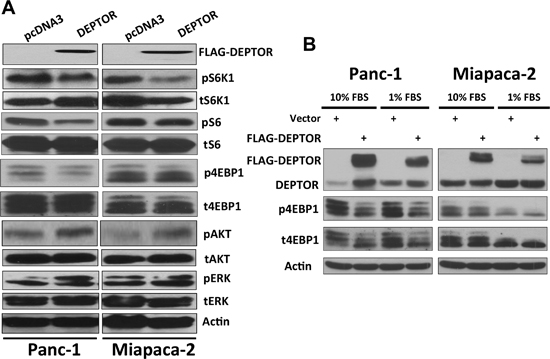 Figure 6: DEPTOR expression inhibits mTORC1 activity in PDAC cells. DEPTOR-ectopically expressing Panc-1 and Miapaca-2 cells were seeded, along with the vector control cells, into 60-mm dishes and cultured at DMEM with 10% FBS (A) or 10% v.s 1% FBS (B) for 24–48 hrs before being lysed for Western blotting analysis using indicated antibodies.

Collection and preparation of pancreatic cancer tissue microarrays containing 101 patient samples were partially described previously [27]. Immunohistochemical staining of the tissue microarrays, along with six normal pancreatic tissues, was performed using the ABC Vectastain kit (Vector Laboratories) with antibody against DEPTOR/DEPDC6, as described [28]. Sections were developed with DAB and counterstained with haematoxylin.

FACS analysis was performed as described [29]. Briefly, cells were harvested and fixed in 70% EtOH at -20°C for at least 4 h, suspended in 1X Propidium Iodide solution with 400 mg/ml RNase (Roche), and analyzed in the Flow Cytometry Lab facility at the University of Michigan. The percent apoptosis is the percent of cells in the subG1 population.