Results: Immunohistochemical staining of two MPMNs revealed they were positive for epithelial membrane antigen (EMA), vimentin, CD56, and progesterone. We identified deletion of the NF-2 gene in two MPMNs and one CNS meningioma.

Conclusions: MPMN and CNS meningioma may develop via the same mechanism through NF-2 translocation. Further studies are required to elucidate the genetic similarities between these entities.

Minute pulmonary meningothelial-like nodules (MPMNs) are characteristically asymptomatic, usually being detected incidentally in resected lung specimens. In 1960, Korn and colleagues first described a pulmonary lesion consisting of small nests of cells located in the interstitium and associated with small veins [1]. The authors proposed they have a chemoreceptor cell origin on the basis of their cytologic characteristics, cellular organization, and relationship to vessels, and named them “multiple minute pulmonary tumors resembling chemodectomas”.

In Spain’s series, most of these lesions occurred in patients with pulmonary thromboemboli [2]; ischemia caused by vascular occlusion was therefore considered a possible stimulus for their development from precursor chemoreceptors. However, Kuhn and Askin [3] and Churg and Warnock [4] questioned the chemoreceptor-like nature of these nodules, having demonstrated they have ultrastructural features of meningothelial rather than neuroendocrine cells. Weissferdt and colleagues explored the status of neurofibromatosis (NF)-2 gene in pleuropulmonary meningothelial proliferations and compared it with that of meningiomas of the central nervous system (CNS) [5]. They demonstrated that pleuropulmonary meningothelial lesions have genetic pathways in common with CNS meningiomas and also provided support for the hypothesis that MPMNs and pulmonary meningiomas are related lesions, possibly arising from the same precursor cells. In this study, we used interphase fluorescence in situ hybridization (FISH) to assess the NF-2 status of two MPMNs and two CNS meningiomas.

The MPMNs had been found in specimens from one woman and one man, as had the CNS meningiomas. Patients and tumor characteristics and FISH status are summarized in Table 1. One MPMN was an incidental finding during examination of a lung specimen resected for an unrelated adenocarcinoma and the other from a patient with respiratory symptoms, including dry cough and dyspnea, who had wide-spread ground glass opacities. Neither of the study patients with MPMN had clinical or radiological evidence of intracranial or spinal meningiomas or a history of NF-2-associated syndromes. 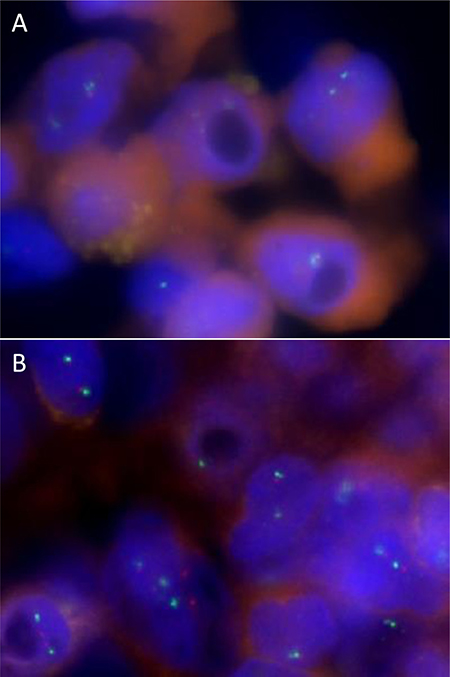 Figure 1: FISH analysis showing deletion of NF-2 gene in an MPMN. (A) Loss of one red and one green signal in >50% of tumor cells was interpreted as deletion of 22q. Normal amounts of 22q (two red NF2 and two green CEN22q signals in >50% of nuclei) are also shown (B).

MPMN was first described almost six decades ago; however, the exact origin and pathogenesis of these curious lesions are still unknown. Pulmonary meningothelial-like nodules are considered to be reactive and have been noted to have histologic, immunohistochemical, and ultrastructural features of meningiomas [3, 4, 6–8]. Ionescu et al. reported a mutational analysis of MPMNs and intracranial meningiomas and found that isolated MPMNs lack any mutational damage, further supporting a reactive origin [9]. However, the majority of meningiomas showed major molecular events with a high frequency of loss of heterozygosity at 22q. This reported difference in genetic alterations between MPMNs and intracranial meningiomas has been interpreted as supporting the theory that the lesions arise from different cells, have different histogeneses, and progress through different molecular pathways.

Immunohistochemical studies have shown that MPMNs stain positive for EMA, vimentin, and progesterone, and negative for cytokeratin, actin, CD34, S-100 protein, chromogranin, synaptophysin, and neuron-specific enolase [6, 7, 10]. It has also been shown that MPMNs have immunoreactivity for progesterone receptors, suggesting that sex steroids play a role in control of their growth [7]. Furthermore, Mukhipadhyay and colleagues were the first to report positive staining for CD56 [11], which is commonly present in neuroendocrine proliferations and has also been reported in meningiomas [12]. The finding of CD56 staining in MPMN supports meningothelial differentiation.

Niho et al. found MPMNs in 10% of patients with lung adenocarcinoma [7]. Mizutani et al. also reported that MPMNs are found more often in patients with malignant pulmonary tumors (especially adenocarcinoma) than with other pulmonary disorders [18]. Although most MPMNs are benign lesions with an indolent clinical course, our second patient presented with more extensive atypical MPMN, which was characterized by widespread ground glass attenuation mimicking pulmonary adenocarcinoma in situ.

In conclusion, MPMNs may develop via the same mechanism as CNS meningiomas or neurofibromatosis syndrome, through deletion of the NF-2 gene. More detailed studies are required to elucidate the correlations between these entities and their pathogenesis to enable development of more individualized therapies.

FISH was performed using a commercially available dual-color DNA probe targeting NF-2 (22q12.2) colored with Texas Red and CEN22q (22q11.22) colored with FITC (GSP Laboratories, Kobe, Japan), the latter serving as an internal control. Sections of 4 μm thickness were deparaffinized, dehydrated, and air-dried, followed by protease treatment at 37° C for 15 minutes. The slides were then washed in 2× standard saline citrate, dehydrated at room temperature, and allowed to air dry. After marking the hybridization area, the FISH probe was applied to all sections, followed by denaturing of probe and target at 75° C for 5 minutes. Overnight hybridization at 37° C took place in a humidified chamber. Post-hybridization washes in 2× saline sodium citrate (SSC) (5 min, room temperature), 2×SSC/0.3% NP40 (1 to 2 min, 75° C), and 2× SSC (1 min, room temperature) were performed and the slides allowed to air dry. DAPI (4′,6-diamidino-2-phenylindole, 1500 ng/mL; Abnova, Taoyuan, Taiwan) was used as a nuclear counterstain and the sections were examined using a fluorescent microscope with the appropriate filters (Olympus, Melville, NY, USA). One hundred non-overlapping interphase nuclei were scored for the number of fluorescent signals. Hybridizations were considered non-informative if the FISH signals were either lacking or too weak to interpret. Interpretation of deletion required >50% of nuclei containing only one NF-2 signal, as previously reported [19]. Polysomies (gains) were arbitrarily defined as >5% of nuclei containing three or more signals.