Background: Grade 3 and 4 adverse events (AEs) during cycle 1 are traditionally used for dose escalation decisions in Phase I oncology trials. With molecularly targeted agents (MTAs), assessment of lower grade AEs and those in later cycles is considered increasingly relevant.

Methods: We conducted a retrospective analysis of AEs in patients enrolled onto relevant phase I trials of MTAs and cytotoxic combinations (CCs) at our UK centre between 2006 and 2016. All AEs in the first six cycles deemed at least ‘possibly related’ were recorded.

Adverse events (AEs) in early phase oncology trials play a key role in dose escalation [1], with dose-limiting toxicities (DLTs) being particularly important. While AEs and DLTs are recorded throughout the entirety of a trial, occurrences beyond the DLT window (cycle 1) are rarely incorporated into subsequent publication [2].

It has been established that there is variation in DLTs between cytotoxic and non-cytotoxic agents [3]. Cytotoxic agents generally exhibit more severe and higher grades of toxicity in earlier cycles [4], whereas molecularly targeted agents (MTAs) are often administered chronically until progression, making consideration of lower grade AEs and those in later cycles highly relevant [2, 5, 6]. This has led to investigators having to consider how to address both late and dose-limiting toxicities across drug types [7]. Some investigators have suggested the classic DLT window should be extended to take into account MTAs toxicity [2, 8]. However, differences in the timing and severity of cytotoxic and MTAs AEs suggest a need for flexibility in managing different trial types [9].

To our knowledge, there has been no previous investigation into differences in AEs in phase I trials of MTAs compare to cytotoxic combinations (CCs) over time. The primary objective of this study was to analyse AEs from patients enrolled on relevant phase I dose escalation trials at a single UK centre to determine incidence of AEs between drug classes (CCs versus MTAs), and between cycle 1 versus cycles 2-6.

Previous work has compared single agent cytotoxic and MTA dermatological AEs and found a substantial number of AEs occurring outside the DLT window with variation in AE type based on agent studied [10]. It has been suggested that toxicities from all cycles should be taken into account for analysis and reporting of phase I trials [11].

In line with previous work suggesting ethnic, age and gender based risk of toxicities [12], the secondary objective of this study was to determine differences in incidence of AEs across specific clinical, demographic and socio-economic cohorts. 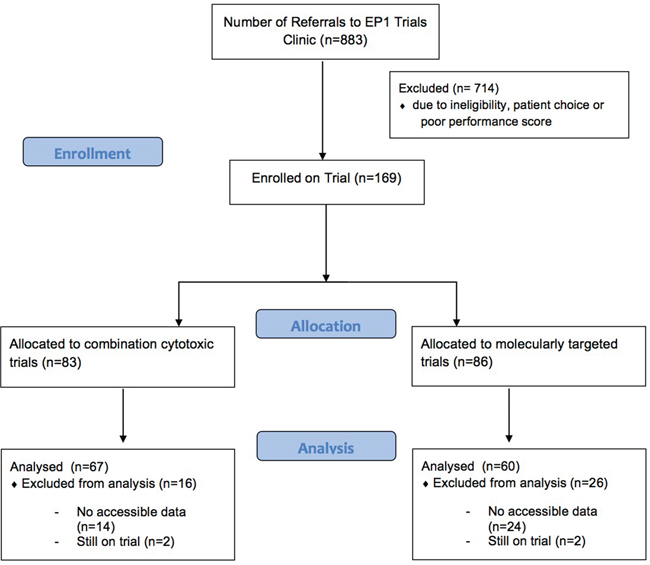 Figure 1: CONSORT flow diagram. Flow of patients selected for analysis in this study.

Demographics of the 127 patients referred to the early phase trials unit at Guy’s Hospital London who subsequently went on a dose escalation trial and had their adverse events recorded for this study.

a – includes patients who did not have an English postcode.

Patients were enrolled on a total of 15 trials (7 CCs and 8 MTAs). Details of specific MTAs pathways and cytotoxic drug mechanisms of action can be found in Table 2.

Characteristics of trials in which the 127 patients analysed in this study were enrolled onto and participated in, with specific divisions the type of cytotoxic agent used and the pathways of the molecularly targeted agents.

Failure to complete six cycles of treatment was due to either progressive disease or toxicity. 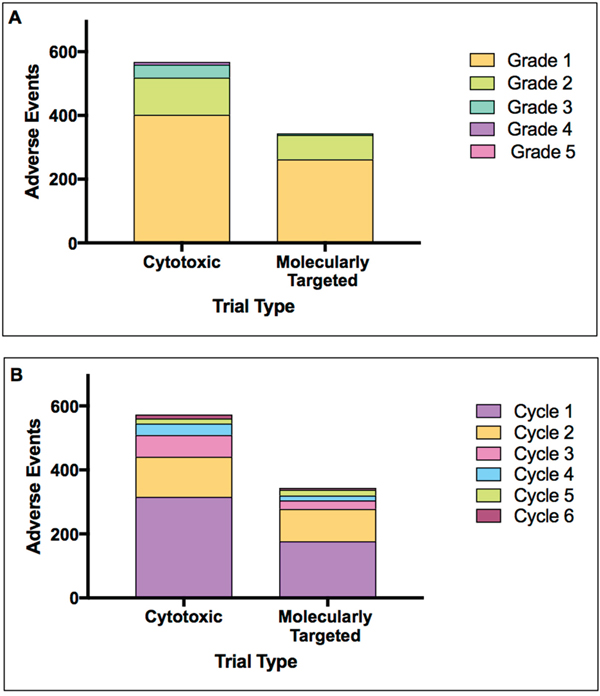 Figure 2: Adverse events by trial type. Adverse events collected from patients of each trial type, cytotoxic combination and MTAs single agent, split by (A) CTCAE grade 1-6 and (B) cycle number 1-6.

Table 3 shows AEs ranked by incidence in cycle 1 and cycles 2-6. Fatigue and diarrhoea showed high incidence in all cycles. Beyond cycle 1, AEs such as anorexia and vomiting became more apparent in all patients.

Ranked adverse events by trial type and cycle number, either cycle 1 or cycles 2-6. AEs were ranked to show top 10 in each trial and cycle group. AEs are displayed in ascending order of raw count with percentage incidence given in brackets.

b including stomatitis and coryzal symptoms.

c including resultant fever or sepsis.

Cumulative AE incidence by grade was evaluated by the creation of time to first AE curves. For CCs (Figure 3A), of the 24 patients who experienced G3 toxicity, 58% presented for the first time after cycle 1. Incidence of G4 toxicity beyond cycle 1 was of a similar occurrence, with 43.0% of patients with G4 toxicity presenting for the first time in cycles 2-6. 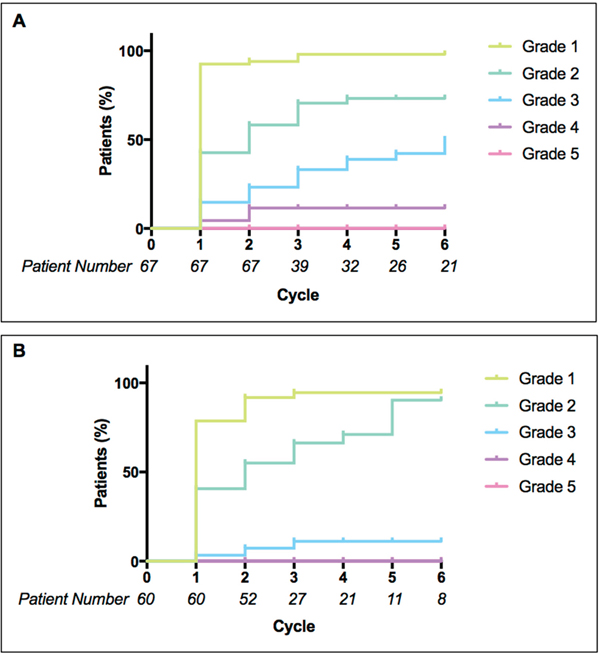 In MTAs trials (Figure 3B), 34.0% of patients who experienced G2 toxicity presented following cycle 1 (taking into account decreasing number of patients per cycle); there was a gradual increase of first incidence G2 toxicity throughout all six cycles. G3 toxicity incidence was low overall (5 patients) but three events occurred for the first time beyond cycle 1. Log-rank (Mantel-Cox) tests were performed to compare incidence of each grade between trial types; G1, G2 and G5 all showed no significant difference (p-values > 0.05). G3 showed a highly significant difference (p-value 0.0033) between CCs and MTAs trials; G4 toxicity also showed a significant difference between CCs and MTAs (p-value 0.01).

Statistical analyses were performed across a range of clinical, demographic and socioeconomic variables (Table 1) comparing mean AE values in cycle 1, cycles 2-6 and overall. There were no statistically significant differences (p-values > 0.05) in AEs across age, gender, ethnicity, comorbidity index, depravation index, number of metastatic sites, prior radiotherapy or chemotherapy, NLR and RMH scores.

Events that were directly caused by toxicity, resulting in dose interruptions, dose reductions or a removal of a patient from the trial they were enrolled in, were recorded. These interruptions and modifications consisted of 52 AEs, resulting in 37 events in a total of 28 patients. AEs involved in these events were split by grade; G1 = 5, G2 = 26, G3 = 20, G4 = 1 and G5 = 0. These AEs spanned nine different categories (Figure 4B), with constitutional and dermatological events accounting for the majority (57.7%). 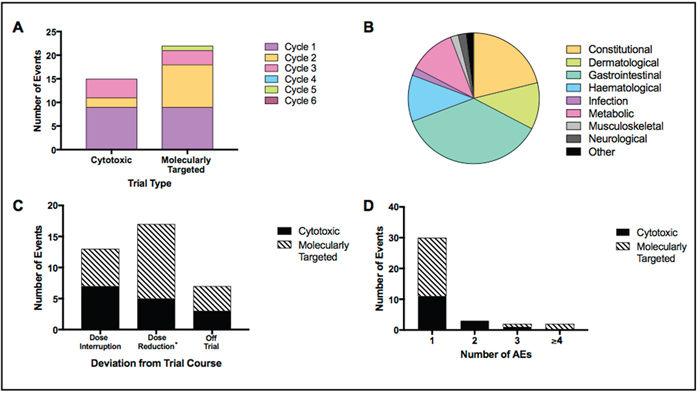 Figure 4C shows the distribution of event types by trial (dose interruptions, dose reductions and off trial). Patients on CCs experienced a higher incidence of dose interruptions (46.6% versus 27.3% for patients on MTAs). Dose reductions were the highest in patients on MTAs trials, accounting for 54.5% (12/22 events), and 33.3% (5/15) of events in CCs. Number of AEs contributing to each event is shown in Figure 4D. Highest AE total in one event was six and was recorded in a patient on a MTAs trial.

Of 37 events causing treatment interruptions or dose modifications, 17 were classified as DLTs, 10 occurring within the DLT window (cycle 1) and 7 in cycles 2-6.

Evaluation of the differences of adverse events in cytotoxic and molecularly targeted agents is a prominent consideration in early phase trials. Cytotoxic AEs typically occur more acutely and show higher incidence of increased severity [4], whereas MTAs AEs present more chronically with a lower level of toxicity [13].

Previous studies have evaluated specific aspects of toxicity patterns in phase I trials, such as the emergence of MTAs AEs [14] and variation in DLT events [3]. With that in mind, this study set out to investigate a broader toxicity perspective by including all AEs recorded.

To our knowledge, this is the first study to assess differences in incidence of AEs between MTAs and CCs, and across different cycle numbers. A total of 912 AEs were recorded across 420 cycles of treatment in 127 patients. We have confirmed that patients on CC trials experienced a significantly higher number of AEs over six cycles compared with MTAs. This is in keeping with previous data from other series, supporting findings that patients on CCs experience a higher volume of AEs [15] than MTAs [16]. These findings were supported by a significantly higher cumulative incidence of patients on CC trials experiencing their first G3 and G4 toxicity over six cycles. Incidence of first G2 and G3 toxicities in patients on MTAs trials increased steadily throughout cycles 2-6, highlighting the later presentation of toxicities with MTAs [2].

Treatment interruptions and dose modifications showed no significant difference between trial types or cycles, however the numbers of patients in these subgroups were too small to draw meaningful comparisons. Nevertheless there was still a notable amount of these events following the completion of cycle 1 in both trial types, an important finding given that dose interruptions and reductions can lead to suboptimal therapeutic outcomes [17]. DLT comparisons between both trial types (CCs versus MTAs) and cycles (cycle 1 versus cycles 2-6) support previous work, indicating that the DLT period is not long enough and should be extended beyond the traditional DLT window of cycle 1 [8].

The main limitation of this study is the lack of prospective recording of asymptomatic haematological and biochemical abnormalities. Although this is unlikely to interfere with the conclusions reached, in the future these laboratory results should be prospectively CTCAE graded and included for a broader evaluation of all AEs. In addition, the retrospectively analysis of AEs is another limitation of this study; prospective analysis of both symptomatic and laboratory AEs would allow for more accurate information to be recorded for each patient.

Age and ethnicity have been suggested to influence toxicity [12] in a large variety of drugs not just chemotherapeutic agents [18–20]. In addition, number of metastatic sites, NLR and RMH scores are important indicators of prognosis [21]. These variables were therefore analysed for differences in toxicity. Gender, comorbidity index score, socioeconomic status, radiotherapy history and chemotherapy history were also evaluated. In the cohorts studied, there was no significant difference found between any subgroup of the variables tested, potentially due to small sample size. Although these results are comparatively different to some previous studies [12], this lack of significant difference in toxicity may be beneficial with regards to enrolment of patients on phase 1 trials. Previous work from our centre has demonstrated that patients from a lower socioeconomic background (based on index of multiple depravation) are statistically less likely to be referred to a trials unit [22].

The results of this study provide an evaluation of drug toxicities between patients treated in cytotoxic combination and MTA trials. The data presented here, showing more frequent incidence of first grade 3-4 AEs after cycle 1 for MTAs, supports the routine incorporation of delayed AEs into recommendations of Phase 2 dosing and schedule for these agents.

Patients enrolled on phase I dose escalation trials in the early phase oncology trials unit at Guy’s Hospital, London, United Kingdom between March 2006 and May 2016 were selected. For patients enrolled onto multiple trials, only the first trial was included for data collection.

All patients were anonymised to maintain confidentiality.

All AEs that were deemed at least ‘possibly related’ and were not classified as present at baseline were recorded throughout cycles 1 to 6. All AEs were graded using the Cancer Institute Common Terminology Criteria of Adverse Events (CTCAE), version 3.0 (4 trials) or version 4.3 (11 trials).

Raw AE data was organised and manipulated to provide total AE values per patient to a total of up to six cycles. Total number of cycles completed was recorded for each patient and total AEs per cycle calculated.

Analysis of time to first AE data was performed using log-rank (Mantel-Cox) tests alongside a log-rank test for trend. For analysis of treatment interruption and dose modification events between trial types, two-way ANOVA and further t-tests were performed.

For all results, a p-value of ≤0.05 was deemed to be significant.

This analysis as well as treatment on each clinical trial was done with approval of the Guy’s Hospital Institutional Review Board. Studies were performed in accordance with the Declaration of Helsinki and all participants gave informed written consent to participate in the trial they were enrolled onto.