KRAS and TP53 mutations, which are the most common genetic drivers of tumorigenesis, are still considered undruggable targets. Therefore, we analyzed these genetic aberrations in metastatic non-small cell lung cancer (NSCLC) for the development of potential therapeutics. One hundred eighty-five consecutive patients with metastatic NSCLC in a phase 1 trial center were included. Their genomic aberrations, clinical characteristics, survivals, and phase 1 trial therapies were analyzed. About 10%, 18%, 36%, and 36% of the patients had metastatic KRAS+/TP53+, KRAS+/TP53-,KRAS-/TP53+, and KRAS-/TP53- NSCLC, respectively. The most common concurrent genetic aberrations beside KRAS and/or TP53 (>5%) were KIT, epidermal growth factor receptor, PIK3CA, c-MET, BRAF, STK11, ATM, CDKN2A, and APC. KRAS+/TP53+ NSCLC did not respond well to the phase 1 trial therapy and was associated with markedly worse progression-free (PFS) and overall (OS) survivals than the other three groups together. KRAS hotspot mutations at locations other than codon G12 were associated with considerably worse OS than those at this codon. Gene aberration-matched therapy produced prolonged PFS and so was anti-angiogenesis in patients with TP53 mutations. Introduction of the evolutionary action score system of TP53 missense mutations enabled us to identify a subgroup of NSCLC patients with low-risk mutant p53 proteins having a median OS duration of 64.5 months after initial diagnosis of metastasis. These data suggested that patients with metastatic dual KRAS+/TP53+ hotspot-mutant NSCLC had poor clinical outcomes. Further analysis identified remarkably prolonged survival in patients with low-risk mutant p53 proteins, which warrants confirmatory studies.

Non-small cell lung cancer (NSCLC), constituting more than 80% of all lung cancers, is the leading cause of cancer morbidity and mortality worldwide [1]. Mutations of KRAS, a member of the RAS family, are among the most common oncogene mutations in NSCLC patients, identified in up to 30% of NSCLC cases [2–5]; are most frequently activating point mutations at codons G12, G13, and Q61 [6]; occur most often in patients with adenocarcinoma, who are white, and who are current or former smokers [7–9]; and are mutually exclusive of epidermal growth factor receptor (EGFR) mutations and ALK and ROS1 rearrangements [8, 10–12]. Inactivation of the TP53 gene is the most frequent molecular alteration in NSCLCs. Reported incidence rates for TP53 exon 5-8 mutations in NSCLC patients ranged from 31% to 79%, with mutations occurring most frequently in squamous cell carcinoma cases [13–15]. TP53 plays many important roles in the prevention and suppression of abnormal cell growth through cell-cycle arrest, apoptosis, senescence, and DNA repair and induction of drug resistance [15, 16]. Although the prognostic or predictive value of TP53 mutations has been inconclusive in NSCLC cases [17–23], recent studies demonstrated that antiangiogenic-based therapy may be appropriate for the treatment of TP53-mutant NSCLC [24–26].

Both KRAS and TP53 mutations are considered undruggable [27]. In the present study, we reviewed the demographic characteristics and clinical outcomes of patients with metastatic NSCLC who were referred to phase 1 trial center at The University of Texas MD Anderson Cancer Center in an effort to determine the impact of KRAS and TP53 mutations on their disease for the development of potential therapeutics.

The impact of KRAS and TP53 hotspot mutations on survivals 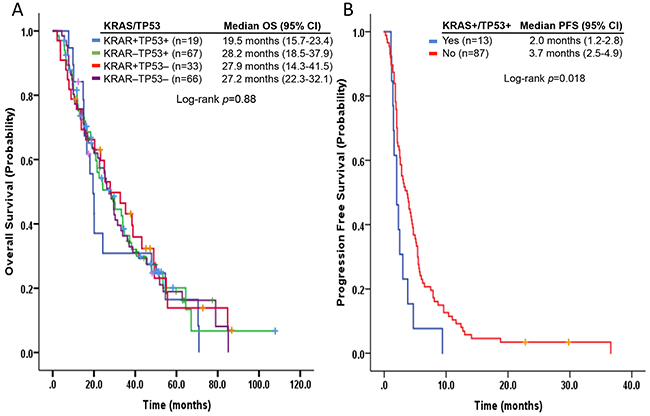 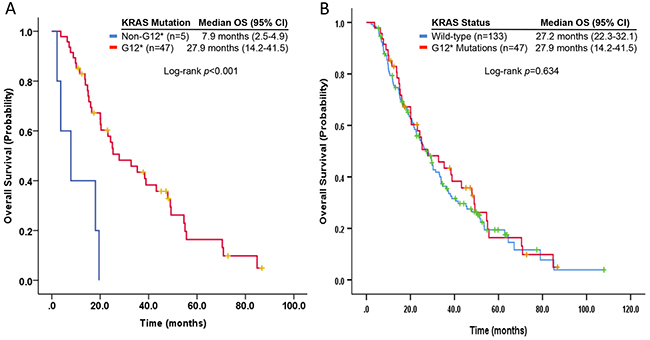 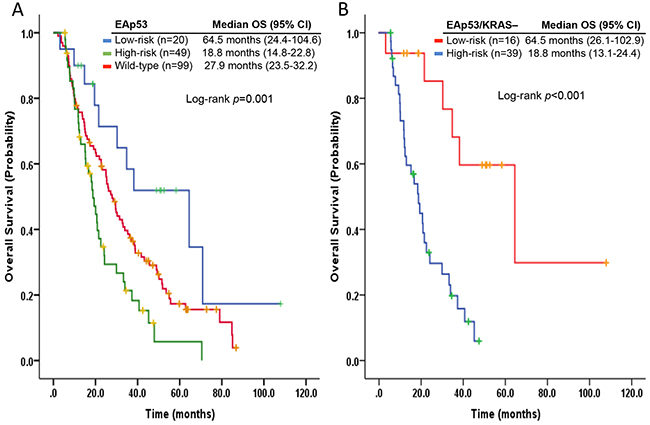 Figure 3: Kaplan-Meier curves of overall survivals according to the EAp53 scores in all patients (A) and in those without KRAS hotspot mutations (B).

The impact of phase 1 trial therapy on PFS

We previously reported on an outcome analysis of patients with metastatic KRAS and TP53 hotspot-mutant solid tumors in a phase 1 trial center [28]. In the present study, we focused on the impact of KRAS and/or TP53 hotspot mutations on patients with metastatic NSCLC as well as the impact of phase 1 clinical trial therapy on their survival. We selected 185 consecutive patients from June 2011 to December 2016. We found that the most frequent genomic aberrations in these NSCLC patients were TP53 (47%), KIT (31%), KRAS (28%), EGFR (21%), PIK3CA (14%), c-MET (11%), BRAF (9%), STK11 (9%), ATM (8%), CDKN2A (7%), and APC (5%) mutations, which were similar to previously reported genomic aberrations [29, 30]. About 10% of the patients had KRAS+/TP53+ NSCLC, whereas 18%, 36%, and 36% had KRAS+/TP53-, KRAS-/TP53+, and KRAS-/TP53- NSCLC, respectively. We identified KRAS hotspot mutations at codon G12 (90%) in 47 patients, and 67 different types of TP53 hotspot mutations, including missense, nonsense, and frameshift mutations in 86 patients. EGFR and KRAS hotspot mutations occurred exclusively, whereas we observed BRAF hotspot mutations more frequently in KRAS-/TP53- patients than in KRAS+ and/or TP53+ patients as described previously [31–34].

Further analyses produced several interesting findings. First, patients with metastatic KRAS+/TP53+ NSCLC tended to have poor outcomes with a median OS of 19.5 months (95% CI, 15.7-23.4 months), about 6.8 months shorter than those with metastatic KRAS- and/or TP53- NSCLC. Consistent with this, patients with metastatic KRAS+/TP53+ NSCLC did not respond to the phase 1 trial therapy well, with a median PFS of 2 months (95% CI, 1.2-2.8 months), which was significantly worse than that in KRAS+/TP53-, KRAS-/TP53+, and KRAS-/TP53- patients (3.7 months; 95% CI, 2.5-4.9 months). These data imply that the status of KRAS and TP53 mutation in patients with metastatic NSCLC might serve as a prognostic and predictive factor. Further exploration of the concurrent mutational profiling as demonstrated in Table 2 in the setting of KRAS and/or TP53 mutation is warranted to establish their roles to predict prognosis and response in large cohorts of patients. It was noted that few patients from this retrospective cohort were enrolled in phase 1 clinical trials of immunotherapy. Thus, this finding does not apply to future patients, especially when a majority of patients are enrolled in immunotherapy-based phase 1 clinical trials.

Use of the evolutionary action score system EAp53 further classified TP53 missense mutations [37, 38]. We demonstrated that the presence of low-risk TP53 mutations (EAp53-LR) was associated with significantly better OS than was that of high-risk mutations (EAp53-HR) and the absence of TP53 hotspot mutations. Of note is that patients with metastatic EAp53-LR NSCLC had a median OS longer than 5 years, indicating that the probability of dying (hazard) was reduced by 70% compared with those with metastatic EAp53-HR NSCLC (HR=0.3; 95% CI, 0.14-0.63; p=0.001), and by 48% compared with those without TP53 hotspot mutations (HR=0.52; 95% CI, 0.27-0.99; p=0.049). Both results were statistically significant. If this finding is confirmed in future studies, it will differentiate the concurrent consensus that TP53 mutations are associated with poor clinical outcomes in patients with metastatic NSCLC [23, 39–41]. However, the presence of KRAS hotspot mutations made this survival advantage disappear in our study, suggesting the importance of concurrent mutations or genomic profiles to predicting outcomes. To the best of our knowledge, the present retrospective study is the first study of the association between TP53 mutations and survival in NSCLC patients using the EAp53 system. Future prospective large studies using this system are warranted.

Furthermore, this study demonstrated markedly greater clinical benefit and PFS with matched phase I trial therapy than with phase I trial therapy not targeting genomic aberrations. Specifically, we observed clinical benefit and PFS advantages of matched phase I clinical trial therapy targeting EGFR, BRAF, and ERBB2. However, the difference in OS between the patients who received matched and unmatched therapy was not significant, suggesting that actionable mutations are predictive factors for metastatic NSCLC and/or that more effective novel therapeutic strategies become available to these patients.

Our study had some limitations. Unknown biases and patient selection influenced our analyses because this was a retrospective, single-center chart review. Also, the small number of patients limited confirmatory analyses, especially in subgroup studies. The low frequency of metastatic KRAS/TP53 hotspot-mutant NSCLC in this cohort may not reflect the real picture of NSCLC patients in society, as physicians requested genomic profiling only for patients with sufficient bone marrow, liver, and kidney function as well as decent performance function (about three quarters of the patients had an Eastern Cooperative Oncology Group score of 1 or better). Furthermore, concurrent KRAS and TP53 mutations produce potentially synergistic biological effects. NSCLC associated with both KRAS and TP53 mutations may present as a unique cancer subtype with distinct and aggressive biological behavior [45–49], resulting in many patients with metastatic KRAS+/TP53+ NSCLC not being selected for genomic profiling owing to poor functional status and organ dysfunction. We have to accept that this manuscript presents a limited set of retrospective data, which can only lead to preliminary hypotheses for future studies. Therefore, larger prospective population studies are required to further define the impact of KRAS and/or TP53 mutations on patients with metastatic NSCLC.

From June 2011 to December 2016, 185 consecutive patients with advanced NSCLC were referred to a phase 1 trial center at MD Anderson and underwent molecular tests for genetic aberrations in their tumors. Patient demographics, medical histories, Eastern Cooperative Oncology Group performance statuses, laboratory results, gene aberration results, and outcomes of treatment administered in the phase 1 clinical trials were obtained from their electronic medical records. In accordance with the guidelines of the MD Anderson Institutional Review Board (IRB), this study was conducted under an IRB-approved protocol with waiver of informed consent.

The evolutionary action scores of TP53 missense mutations (EAp53s) were calculated based on a model of the phenotype-genotype relationship in which protein evolution was hypothesized to be a continuous and differentiable process as described previously [52–54]. The EAp53 scores ranged from 0 to 100, with higher scores representing more deleterious alterations according to an EAp53 server (http://mammoth.bcm.tmc.edu/EAp53; Baylor College of Medicine). An EAp53 threshold of 75 was selected to classify a specific mutant p53 protein as low- or high-risk (EAp53-LR and EAp53-HR, respectively) [37, 38].

Treatment of NSCLC and survival evaluation

The decision to enroll an eligible study patient in a phase 1 clinical trial depended on protocol availability and the discretion of the treating physician. Tumor responses to phase 1 trial therapy were evaluated according to the Response Evaluation Criteria in Solid Tumors (version 1.1) [55]. All patients were followed until death or censored on May 1, 2017. Progression-free survival (PFS) was defined as the time from study entry to the date of first objective documentation of progressive disease, date of death, or censor date. Overall survival (OS) was defined as the time from the date of the first phase 1 clinical trial visit (OS-phase I) or the date of the initial metastasis diagnosis (OS-metastasis) to the date of death or the censor date, regardless whether they received a phase I trial therapy.

The phase 1 clinical trial therapy was considered matched therapy if the patient received one or more agents targeting an actionable genetic aberration or proteins downstream from it, such as an EGFR inhibitor for an EGFR mutation [56], a BRAF inhibitor or a mitogen-activated protein kinase kinase (MEK) inhibitor for a BRAF mutation [57, 58], and crizotinib for ALK or ROS1 rearrangement [10, 11].