Pancreatic cancer is one of the most lethal malignancies and is associated with poor prognosis, and the 5-year relative survival rate is currently 8% [1]. This low rate is partly due to the fact that more than one-half of cases are diagnosed at a late stage, and therapeutic modalities are very limited [1, 2]. Although surgical resection is the only curative treatment for pancreatic cancer, even the 5-year survival rate after a curative resection is only ~20% [3]. Therefore, the identification of novel therapeutic modalities is critical for improving patient prognosis.

Pancreatic cancer is aggressive and characterized by invasiveness, rapid progression, and profound resistance to treatment [10]. The invasion and metastasis processes are crucial to the pathogenesis of pancreatic cancer; however, their genetic and biochemical determinants are still not fully understood [11]. We previously identified specific genes, MUC16 and mesothelin, associated with invasion and migration processes in pancreatic cancer [12]. We reported that MUC16 and mesothelin were overexpressed only in infiltrating pancreatic cancer cells but not in PanIN-3 cells or normal pancreatic tissues. It has also been reported that mesothelin may play an important role in cell adhesion [13], cell proliferation and migration, tumor progression [14, 15], and resistance to chemotherapy [16]. Thus, mesothelin might be an attractive target for the development of novel cancer treatments for pancreatic cancer.

In the present study, we focused on mesothelin as a novel tumor-specific antigen target for anticancer immunotherapy for pancreatic cancer. We investigated the mesothelin-derived epitope peptide restricted to HLA-A*2402 that can induce peptide-specific cytotoxic T lymphocytes (CTLs) for possible use in peptide-based immunotherapies for patients with HLA-A* 2402-positive pancreatic cancer.

To identify mesothelin-derived and HLA-A24-restricted CTL epitopes, we synthesized a total of 19 candidate 9-mer and 10-mer peptides that were expected to have high binding affinity to HLA-A24 using the BIMAS program (Table 1). These peptides were evaluated for their potential to induce peptide-specific CTLs in vitro from human PBMCs obtained from HLA-A24 healthy donors (Figure 1). CTLs were induced by a three-time stimulation with DCs loaded with mesothelin-derived peptides. Then, CTLs were examined for specificity for each peptide using IFN-γ ELISPOT assays. Peptide-specific CTLs were judged to have been successfully induced when there were more than 100 spot counts for each and 30 more spot counts than the control. Five peptides could induce peptide-specific CTLs that produced IFN-γ and were able to specifically recognize T2-A24 cells pulsed with each peptide but not T2-A24 cells not pulsed with peptides (Figure 2A).

The binding score was obtained from the BIMAS program (https://www-bimas.cit.nih.gov/molbio/hla_bind/). 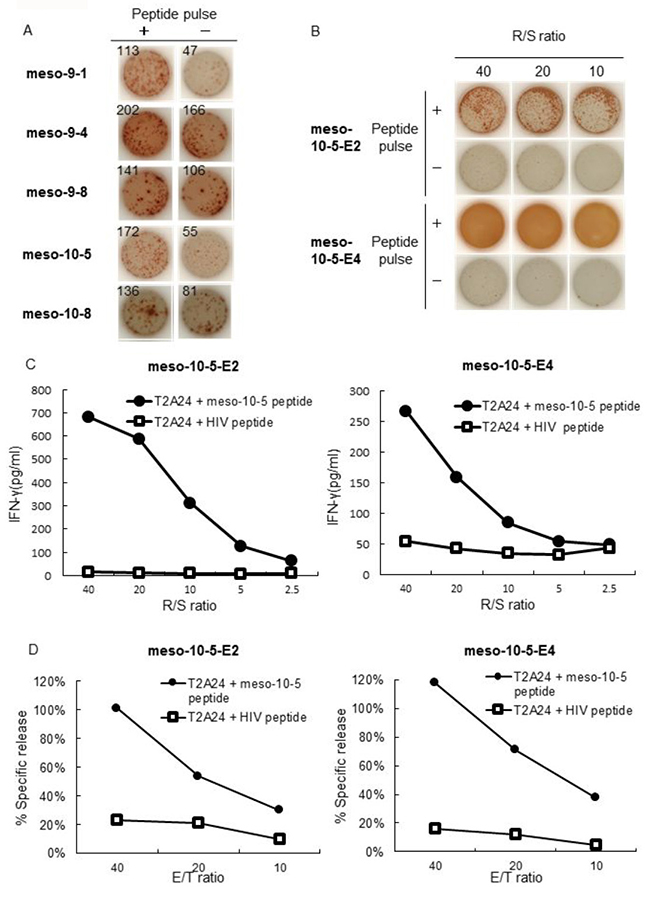 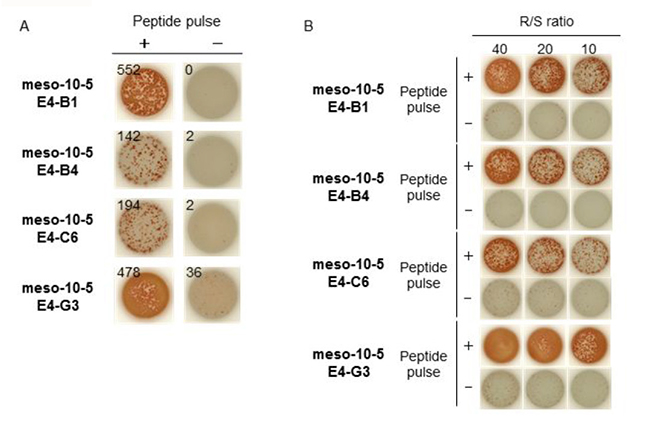 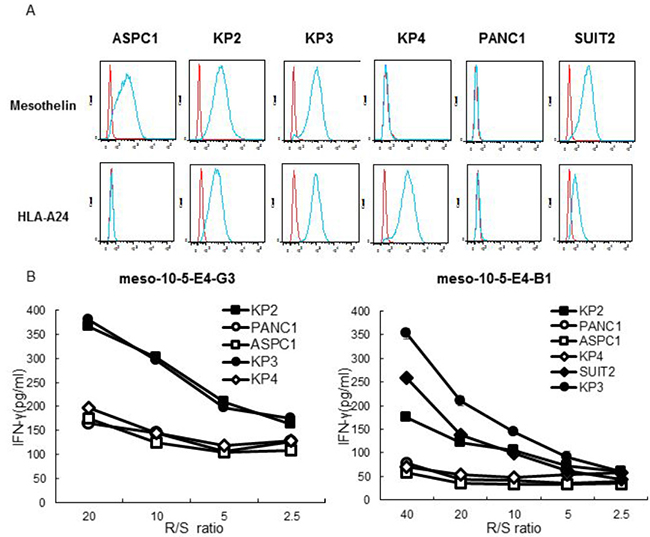 Assessment of therapeutic efficacy of peptide-specific CTLs in vivo 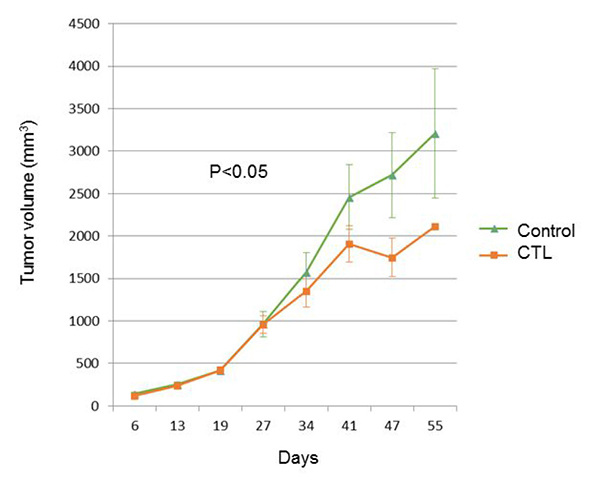 Figure 5: The tumor growth curve of SUIT2-xenograft tumors with or without mesothelin-specific CTL injection.

Mesothelin has been shown to be overexpressed in many human cancers, including mesothelioma, ovarian cancer, pancreatic cancer, lung cancer, gastric cancer, and biliary cancer [12, 17–22]. Furthermore, high expression of mesothelin was correlated with poor prognosis in several human cancers [22–24], and in pancreatic cancer, the coexpression of MUC16 and mesothelin was reported to be an independent prognostic factor for poor prognosis [12]. However, the expression and biological functions of mesothelin in cancer progression remain poorly understood. Recent studies have revealed that mesothelin may play an important role in cancer survival/proliferation, tumor progression, and drug resistance through the Wnt/NF-kB/PI3K/Akt signaling pathway [14, 16, 25]. Furthermore, recent studies have revealed that mesothelin is associated with the invasion and migration of pancreatic cancer cells [12, 26]. Thus, mesothelin might be an attractive therapeutic target for pancreatic cancer, and we focused on this protein for developing a cancer vaccine using an epitope peptide.

Although cancer vaccines can induce an effective anti-tumor T cell response, a vaccine alone may be insufficient to induce a complete tumor cell-killing effect. An optimal anti-tumor immune response requires not only an increase in immune activation but also a decrease in immune suppression. The upregulation of PD-L1 has been reported in a wide variety of cancers, including pancreatic cancer, and the PD-1/PD-L1 pathway suppresses the anti-tumor immune response [30]. PD-L1 expression on a tumor can be induced thorough oncogenic pathways [31] or an adaptive immune resistance mechanism in response to the production of inflammatory cytokines by tumor-infiltrating lymphocytes [32–34]. Recent studies have reported that tumor-specific T cells were recruited to the tumor microenvironment and that immune checkpoint expression, including PD-L1, was upregulated in response to therapeutic vaccines in pancreatic cancer [9, 35]. Thus, the tumor microenvironment could be changed from a cold tumor to a hot tumor by a cancer vaccine. To overcome this cold tumor problem in which an anti-tumor effect is not achieved with a checkpoint inhibitor alone, a cancer vaccine to induce CTLs combined with checkpoint blockade antibodies that inhibit immune suppression represents a good combination therapy to mediate complete tumor suppression [36].

In addition to using vaccine-based therapies, other approaches such as T cell transfer therapies are also under consideration for immunotherapy. Chimeric antigen receptor T cells (CAR-T cells) are produced by one method for adoptive T cell transfer, and a preliminary study showed that mesothelin-specific CAR mRNA-engineered T cells could induce an anti-tumor immune response [37]. A recent study has shown that checkpoint inhibitors could also enhance the CAR-T cell response [38]. These data suggest that mesothelin is a good target for cancer immunotherapy. Peptide vaccines have several advantages, including that peptide synthesis can be performed easily at a low cost and that their relative safety has been demonstrated in preclinical and clinical studies. Therefore, peptide cancer vaccines may be a good option for use in combination therapies.

Mesothelin-derived 9-mer and 10-mer peptides with high binding affinity to HLA-A:*24:02 were predicted with the binding prediction software ‘‘BIMAS’’ (http://www-bimas.cit.nih.gov/molbio/hla_bind). HLA-A*24:02-restricted HIV-derived epitope peptide (RYLKDQQLL) was used for a negative control, and HLA-A24 restricted CMV peptide (QYDPVAALF) was used for a positive control. Peptides were dissolved in dimethylsulfoxide at 20 mg/ml and stored at −80° C.

In vitro induction of peptide-specific CTLs

Peptide-specific CTL responses were investigated using an ELISPOT assay with an IFN-γ ELISPOT kit and AEC substrate set (BD Biosciences, San Jose, CA) according to the manufacturer’s instructions. For use as the stimulator cells, T2A24 cells were pulsed with 20 μg/ml the respective peptide at 37° C for 20 h, and residual peptide that did not bind to cells was washed out. After removing 500 μl of supernatant from each well of the induced peptide-specific CTLs, 100 μl of cell culture suspensions was harvested from each well and co-cultured with stimulator cells (1 × 104 cells/well) on an ELISPOT plate at 37° C for 20 h. The resulting spots were counted using an ELIPHOTO Counter (Minerva Tech K.K., Japan).

The cytotoxic activity of peptide-specific CTLs was examined using flow cytometry in a fluorescence-based cytotoxicity assay. In the flow cytometry analysis, both carboxyfluorescein diacetate succinimidyl ester (CFSE) and mesothelin peptide-pulsed cells were used as the target cells, and HIV peptide-pulsed and CFSE-labeled cells were used as controls. Target and control cells were labeled with 10 μM CFSE for 5 min each and co-incubated with CTL in 200 μl/well of 5% AS/AIM-V on a 96-well round-bottom plate for 4 h. Cell culture suspensions were harvested and analyzed using a FACS-Canto II flow cytometer (Becton Dickinson, San Jose, CA).

Fluorescence-based cytotoxicity assays were carried out with DELFIA EuTDA Cytotoxicity Assay Reagents (PerkinElmer Life and Analytical Sciences, Boston, MA). Mesothelin peptide-pulsed cells and HIV peptide-pulsed cells were used as the target cells and labeled with DELFIA BATDA reagent according to the manufacturer’s instructions for 30 min at 37° C. Then, the target cells with BATDA were incubated with peptide-specific CTLs for 4 h. After incubation, the supernatants were collected, and the time-resolved fluorescence was measured. Specific release was calculated as follows:

The CTL activity was examined using an IFN-γ ELISA. Peptide-pulsed cells (1 × 104 cells/well) or pancreatic cancer cells (5 × 104 cells/well) were used as a stimulator. CTLs were co-cultured with stimulator cells in 200 μl/well of 5% AS/AIM-V on 96-well round bottom plates for 20 h. After incubation, cell-free supernatants were collected, and IFN-γ production was measured using a Human IFN-γ ELISA set (BD Biosciences) and BD OptEIA™ Reagent Set B (BD Biosciences) according to the manufacturer’s instructions.

Therapeutic effects of mesothelin peptide-specific CTLs were investigated in vivo in pancreatic cancer experiments. Six- to 8-week-old NOD/SCID common γ-chain knockout (NSG) female mice (Charles River) were used. In total, 107 SUIT2 cells were subcutaneously implanted in the flanks of NSG mice; these cells expressed HLA-A2402 and mesothelin (Day 0). On days 23 and 37, mice received an intra-venous injection of 5 × 106 mesothelin-specific HLA-A2402 restricted CTLs. The untreated mice were injected with PBS as negative controls. Mice were weighed and tumor size was measured once a week.