Objectives: To investigate the necessity of stratifying patients in the intermediate-risk group of the Memorial Sloan Kettering Cancer Center (MSKCC) criteria in a real-world population of patients with metastatic renal cell carcinoma.

Patients and Methods: We retrospectively analyzed 234 consecutively treated patients who had received molecular targeted drugs. We examined the difference between progression-free survival and overall survival among patients in the intermediate-risk group of MSKCC criteria. We divided the intermediate group into two subgroups as follows: patients positive for only one risk factor (Int-1) and those positive for two risk factors (Int-2) including performance status, serum hemoglobin level, time from diagnosis to treatment, and corrected calcium and lactate dehydrogenase levels. Next, we evaluated the association between the number of metastatic organs, the presence of pancreatic metastasis, Int-1 or Int-2 grouping, and overall survival.

Conclusion: Patients in the intermediate-risk group had different prognoses depending on the number of positive risk factors.

In this study, therefore, we performed a retrospective analysis of patients treated with tyrosine kinase inhibitors and mammalian target of rapamycin inhibitor in the intermediate-risk group within a real-world Japanese population to investigate the necessity of stratifying patients in the intermediate-risk group. Optimal classification for Japanese population may predict treatment effect or investigate a treatment approach in the future.

Table 1 shows the characteristics of the study population. Patients in the intermediate risk class accounted for about 50% of all risk classes. The median overall survival (OS) was 41.2 months (Supplementary Figure 1). The median OS of the favorable-, intermediate-, and poor-risk groups based on the MSKCC criteria were 91.0, 33.6, and 15.2 months, respectively (Supplementary Figure 2). Patients in the favorable-risk group had a significantly prolonged survival than those in the other groups (hazard ratio (HR) 0.22, 95% confidence interval (CI) 0.11-0.44, p<0.001). Conversely, patients in the poor-risk group had a significantly shorter survival time compared to those in the other groups (HR 3.04, 95% CI 1.95-4.74, p<0.001) and compared to those in the intermediate-risk group alone (HR 2.15, 95% CI 1.37-3.39). The median OS using the first-line treatments- sunitinib, sorafenib, and temsirolimus were 69.6, 33.6, and 11.8 months, respectively. 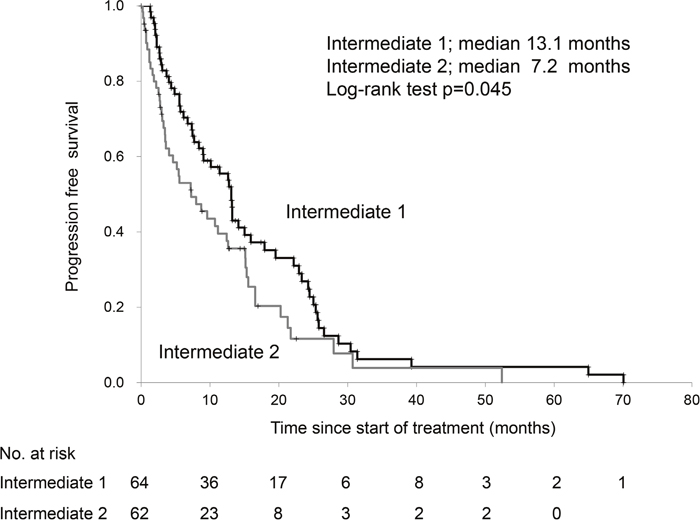 Figure 1: Progression-free survival of patients with 1 versus those with 2 risk factors in the Memorial Sloan Kettering Cancer Center risk classification. 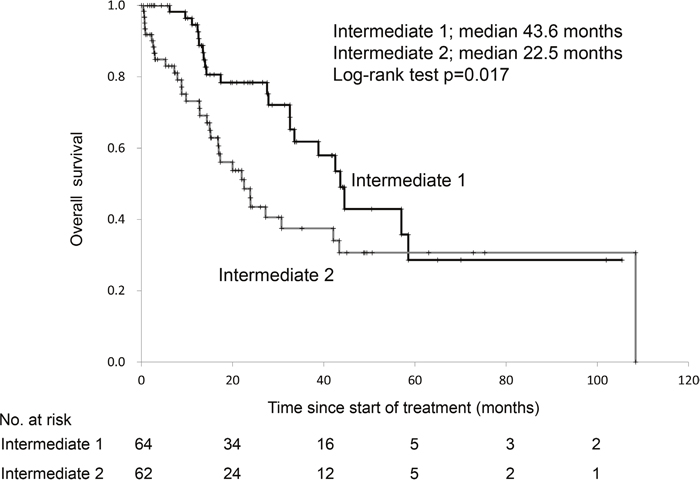 Figure 2: Overall survival of patients with 1 versus those with 2 risk factors in the Memorial Sloan Kettering Cancer Center risk classification.

Table 3: Results of the Cox proportional stepwise multivariate analysis for the association between the variables and overall survival

In addition to other studies, we previously reported that patients in the intermediate-risk group account for about 50% of patients with metastatic renal carcinoma and their survival rate falls between those of the favorable- and poor-risk groups [8, 10, 11]. However, a subcategorization of the intermediate-risk group has not been considered. In recent years, however, clinical trials have been conducted within the intermediate- and poor-risk groups alone or occasionally, clinical trials have been conducted to prove efficacy within these groups alone [12, 13]. Accordingly, a need has arisen to change the treatment approach to match the individual risk groups. However, since the intermediate-risk group involves 1 or 2 risk factors, there is a great variability among the patients and consequently, it has not been decided whether it is appropriate to treat the intermediate-risk group as one group. In our analysis, the OS of the Int-1 and Int-2 groups were 43.6 and 22.5 months, respectively, indicating that the prognosis of the latter group was significantly poorer (log-rank test, p=0.017). The most common positive risk factor in both groups was PS, followed by anemia. This finding suggests that the aggravation of PS and anemia may possibly have an influence on prognosis in both groups. Sella et al. [9] reported that they found a difference in OS and PFS between the Int-1 and Int-2 groups and in PFS and the objective response rate among patients with Eastern Cooperative Oncology Group PS ≥1. These analyses were compiled from the results of six clinical trials, and a conclusion was reached that segmenting the intermediate-risk group and stratification by PS are necessary. Our real-world data supports this conclusion. In addition, the mean survivals in the favorable- and poor-risk groups in the MSKCC study were 91.0 and 15.2 months, respectively. Since the difference in these groups was greater than that in the Int-1 group, prognosis prediction and treatment approach should be treated in a separate study group.

In the present study, OS was 41.2 months, which is longer than that in large-scale clinical trials [14, 15]. This may be influenced by the longer life expectancy of Japanese compared to other races. Furthermore, this may be due to the fact that Japanese have good treatment outcomes including other carcinomas [16]. However, Motzer et al. [17] reported that there were no differences in PFS or OS in Caucasian vs Asian patients. Conversely, there were significant differences in PFS and OS in Caucasians vs non-Caucasians, non-Asian patients. Several investigators also showed that the survival period after the introduction of molecular targeted drugs seemed prolonged compared to that before their introduction [1, 3, 4]. Of the first-line treatment drugs, the survival period of the patients who used sunitinib was the longest. The survival period of patients who used temsirolimus was remarkably short, probably due to its use in the poor-risk group.

There were some limitations to this study; we conducted a retrospective study and the treatment drugs were not unified. Most of the patients in this study were enrolled at a time before the introduction of immuno-oncology drugs in the clinical management of mRCC patients; thus, the survival period may prolong if immuno-oncology drugs become more widely used in the future [13, 18, 19]. In particular, treatment results of immuno-oncology drugs among patients in the poor-risk group are much awaited. Another limitation is that we reported here the necessity of stratifying patients in the intermediate-risk group using the MSKCC criteria. The IMDC criteria, which is another risk classification, is now often adapted to mRCC patients. However, some of our study participants had no available data regarding neutrophil counts, especially those who were diagnosed before 2013; hence, we did not investigate the IMDC risk. Although the MSKCC criteria was established in the cytokine therapy era, we have in addition to other authors, showed that it can be applied efficiently to Japanese patients, even in the era of molecular targeted drugs [8, 10].

In conclusion, we found that patients in the intermediate-risk group based on the MSKCC risk classification had different prognoses, depending on the number of positive risk factors. Our finding will be helpful in the selection of a future treatment approach.

We retrospectively analyzed 234 consecutively treated patients who had received molecular targeted drugs for mRCC. According to the therapeutic strategy in our institute, sorafenib was used as the first-line therapy and sunitinib or everolimus as the second-line therapy. However, since 2010, sunitinib has become the first-line therapy, and since 2012, axitinib has become the second-line therapy. We calculated OS and OS classified according to the MSKCC criteria. The OS period commenced from the time of treatment with the initial targeted therapy.

Next, we examined the difference between PFS and OS among patients in the intermediate-risk group of the MSKCC criteria. We divided the intermediate group into two subgroups as follows: patients who were positive for only one risk factor (Int-1) and those who were positive for two risk factors (Int-2) including performance status (PS), serum hemoglobin level, time from diagnosis to treatment, and corrected calcium and lactate dehydrogenase (LDH) levels. Subsequently, we investigated which factors had an influence on OS between the Int-1 and Int-2 groups.

OS was estimated using the Kaplan-Meier method and the differences were determined using the log-rank test. Cox proportional stepwise multivariate analysis was used to evaluate the association between the number of metastatic organs, Int-1 or 2 grouping, presence or absence of pancreatic metastasis, and OS. A p-value <0.05 was considered statistically significant. All statistical analyses were performed using Microsoft Excel® (Microsoft, Redmond, Washington, USA). Permission to access the database for a review of the medical records of these patients was obtained from the local research ethics committee at Osaka City University (approval number 3441).

Conception and design, drafting of the manuscript: Satoshi Tamada.

We would like to thank Ms. Ayako Akagi for data collection, Mr. Maehira (https://www.igaku-honyaku.jp/) and Editage (www.editage.jp) for English language editing.