Background: Tumor associated macrophages (TAMs) have multifaceted roles in the development of many tumor types. However, the prognostic value of TAMs in bladder cancer is still not conclusive.

Bladder cancer is one of the most common malignant tumors in urological diseases. In USA alone, 58950 new cases of bladder cancer and 11820 cases bladder cancer related deaths were estimated in 2016. These accounted for 7% of all new cancer diagnoses and 4% of all cancer deaths [1]. Transurethral resection of bladder tumor (TURBT) or radical cystectomy (RC) is the primary therapy for NMIBC or MIBC respectively. Following TURBT, bladder instillation of drugs was taken as effective choice to prevent or reduce the recurrence, especially for intermediate and high risk bladder tumors. Many kinds of drugs were recommended to be in use after TURBT, such as chemotherapy and immunotherapy drugs [2]. Bacillus Calmette-Guerin (BCG) intravesical immunotherapy is a classic and effective therapy to inhibit the relapse of intermediate and high risk non-muscle-invasive bladder cancer (NMIBC). However, around 39% of NMIBC patients still relapse and 8% will progress to muscle-invasive bladder cancer (MIBC) [3–5]. High recurrence rate of NMIBC results in repeated TURBT, which leads to huge physical and economical burden to the patients. Hence, it is critical to explore and validate new prognostic biomarkers, which may be helpful for the treatment decisions and the management of bladder cancer.

Search results and characteristics of studies

1238 records were identified from the different databases with keywords and search strategy detailed in methods. 418 duplicate records were removed by the detection of Endnote X7 software. The remaining records were screened by the titles and abstracts, and 220 records were excluded for case reports, reviews, letters, comments or meeting abstract. 600 remaining studies were further evaluated for eligibility, and 587 studies were further excluded for the following reasons: animal studies, not relevant with prognosis of TAMs identified with IHC in bladder cancer patients, without sufficient data to extract the HRs and 95% CIs. Based on the inclusion and exclusion criteria detailed in methods, 13 studies with macrophages detected by immunohistochemistry (IHC) in tumor samples were included for meta-analysis [10–22]. The flow chart of search strategy was shown in Figure 1. 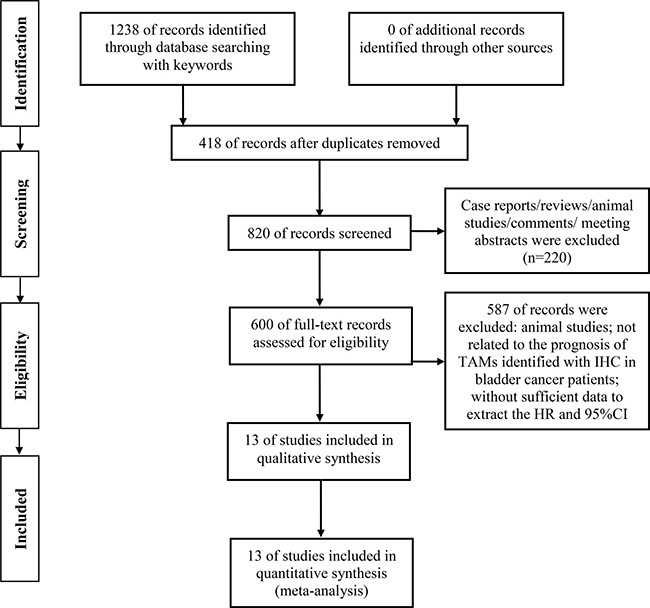 Figure 1: Flow diagram for the selection of included studies.

12 of 13 included studies were published in English, while 1 study was published in Chinese. The total sample size for all records was 1400 cases (range from 27 to 337). Among these cases, 294 of them underwent BCG treatment. Of the 13 studies, 8 studies detected TAMs in whole sample area (or not specified) [10, 13–17, 21, 22], 2 studies were involved with TAMs detected in tumor islet and tumor stroma, respectively [19, 20], 1 study focused TAMs locating in tumor stroma [18], 1 study reported TAMs detected in tumor islet, tumor stroma and whole sample area, respectively [12], and 1study investigated macrophages identified in invasive front or middle to superficial carcinoma parts separately [11]. OS, RFS, DSS and PFS were used jointly or separately as prognostic endpoints in the included studies. Details were depicted in Table 1 and the mean Newcastle-Ottawa Scale (NOS) scores of publication quality were 7.54.

Table 1: The characteristics of included studies

The association between CD68+ TAMs and prognostic outcomes 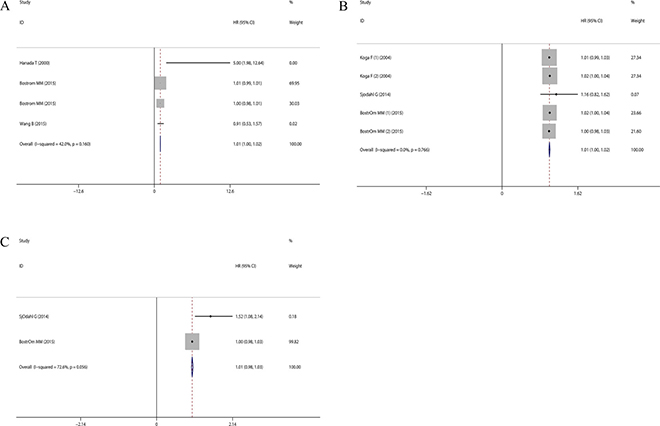 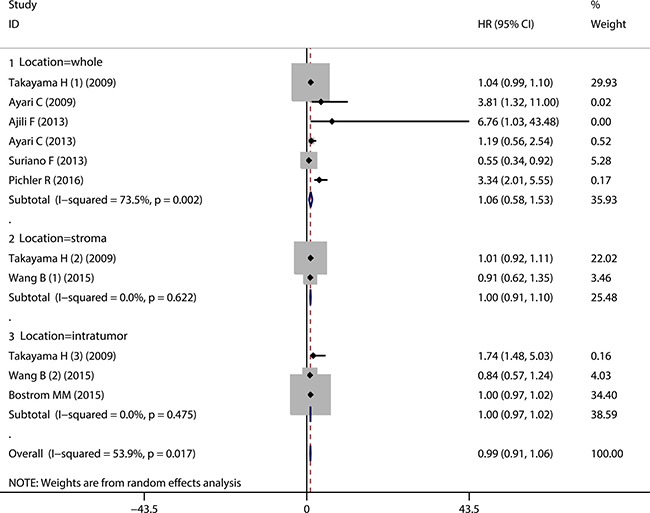 The association of CD68+ TAM with clinicopathological characteristics

We further evaluated the role of elevated TAMs with the clinicopathological parameters in bladder cancer patients. Four of the 13 included studies have presented relevant data of the association between clinicopathological parameters and CD68+ TAMs, while there was not enough data for CD163+ TAMs. Pooled analysis showed no significant correlation between elevated CD68+ TAMs infiltration and sex (Male vs. Female), sge (≥ 70 years VS < 70 years), carcinoma in situ (yes vs. no), tumor stage (T1 vs. Ta), tumor grade (≥ 2 vs. 1) or tumor size (> 3 cm vs. ≤ 3 cm) (detailed in Table 2).

Table 2: The evaluation of elevated CD68+ macrophages with clinicopathological characteristics 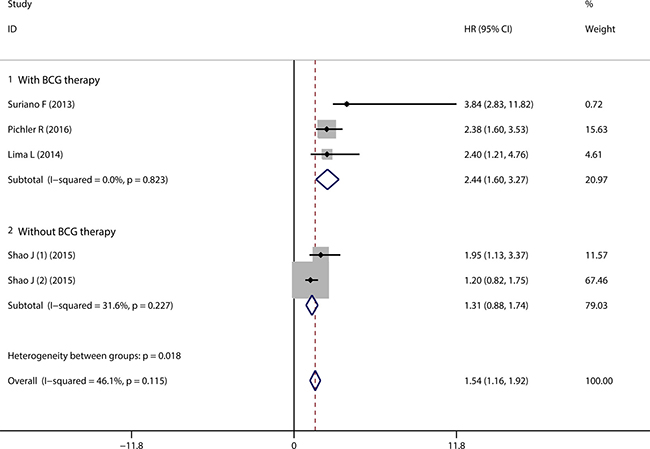 Figure 4: Forest plot of pooled HR for CD163+ TAMs on RFS in bladder cancer patients. Subgroup analyses with regard to the history of BCG therapy.

To evaluate the publication bias of the included studies, Begg’s and Egger’s tests were performed. Begg’s funnel plots showed no significant asymmetry among the included studies concerning the prognostic role of CD68+ TAMs with OS (p = 0.734) (Figure 5A), DSS (P = 1.0) (Figure 5B), and RFS (P = 0.119) (Figure 5C). As for the studies involved with the prognostic value of CD163+ TAMs with RFS, no significant publication bias was found by Begg’s funnel plots (P = 0.221) (Figure 5D). The results derived from Egger’s test were also consistent with abovementioned results (Supplementary Figure 3). Moreover, the results from “ trim and fill ” analyses also confirm our conclusions (detailed in Supplementary Figure 4) which suggest that potential missing data will not change the conclusion. 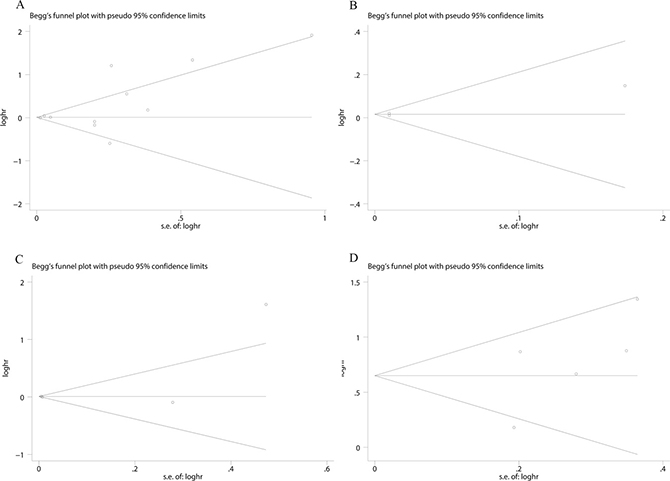 Bladder cancer management is a thorny clinical problem because of frequent recurrence. TUR is performed as the primary treatment for NMIBC. However, most patients need to receive TUR repeatedly due to relapse. In order to reduce the rate of recurrence, BCG intravesical instillation as a type of immunotherapy was strongly recommended for patients diagnosed with carcinoma in situ (CIS), intermediate or high-risk NMIBC following TUR therapy. Recently, many studies have focused on other immunotherapy reagents. For example, Atezolizumab (Tecentriq™, MPDL3280A) as PD-L1/PD-1 immune checkpoint inhibitor, was approved as a second-line therapy for advanced bladder cancer in 2016 [23, 24]. Accumulating evidences have suggested that immune cells play prominent function in tumor microenvironment of bladder cancer and have great potential for bladder cancer management [6, 23].

Traditionally, macrophages play the defensive roles against foreign pathogens and contribute to phagocytosis and presentation of antigens expressed on the surface of the apoptotic or infected cells [25, 26]. In the past two decades, emerging studies have indicated that macrophages can be educated in different stages of TME, and TAMs can play multifaceted function in immune surveillance and tumor development that correlated with specific expression of markers (immune phenotypes). In majority of previous studies, CD68 was used as a common biomarker for all macrophages in tumor samples. However, macrophages can polarize into different phenotypes, which are tightly regulated by tissue and tumor microenvironment [27, 28]. The most simplified classification of macrophages polarization were type 1 or inflammatory macrophages (M1) and type 2 or alternatively activated macrophages (M2) [29–31]. The general belief is that M1 macrophages induce inflammation that may contribute to tumor initiation. In contrast, M2 macrophages mediate tissue repair and immunosuppression that contribute to tumor progression [6, 32]. In most cases, M1 macrophages were characterized by expression of CD80, CD86, human leukocyte antigen (HLA)-DR, inducible nitric oxide synthase (iNOS), while M2 macrophages generally express markers such as CD163, CD204, CD206 and Arginase 1 [31, 32]. Future studies using these macrophage polarization markers may further characterize subpopulation of macrophages that associate with bladder cancer prognosis.

Current study is the first systemic review and meta-analysis to evaluate the prognostic value of CD68+ and CD163+ TAMs in bladder cancer. However, there are some limitations in our study. Firstly, heterogeneity among included studies cannot be completely avoided. Moreover, all the included studies were limited in English and Chinese language. Additionally, HRs and 95% CIs derived from multivariate analysis were generally extracted for this meta-analysis, however, Pichler’s study only provided univariate HRs and 95% CIs [22], and the HRs and 95% CIs were extracted from the Kaplan–Meier survival curve in Suriano’s study [15], which may overstate the prognostic role of TAMs in bladder cancer patients. Finally, the included studies and patients numbers were relatively limited. Therefore, future large scale studies may be required to validate that conclusion from our study.

This systemic review and meta-analysis was performed according to the Preferred Reporting Items for Systematic Reviews and Meta-Analyses statement (PRISMA) [33]. Related publications were retrieved from the database of Web of Science, Pubmed, Embase, Wanfang and China National Knowledge Infrastructure (CNKI). All the publications were searched by August 8, 2017 with the following keywords: “macrophage” and “bladder cancer” or “bladder carcinoma”. The references from retrieved articles were also manually assessed to avoid the omission.

After removing duplications by Endnote X7, the remaining studies were reviewed by two authors independently, and disagreements were resolved by discussion and consensus. The inclusion criteria were as listed below: ① studies focusing on the prognostic value of TAMs infiltration in bladder cancer; ② TAMs were identified by immumohistochemical (IHC) staining in the bladder cancer samples; ③ with sufficient data to extract hazard ratios (HRs) and 95% confidence intervals (CIs). The exclusion criteria for the studies were in the following: ① duplicated studies; ② animal studies, case reports, comments, reviews and meeting abstracts; ③ studies not relevant with prognostic analyses; ④ studies without sufficient data to extract HRs and 95% CIs.

Evaluation of the publications quality and data extraction

We evaluated the methodological quality of the included studies with the selection and outcome categories in the Newcastle-Ottawa Scale (NOS) system [34]. The evaluation was performed by two authors independently, and the disagreements were addressed by the discussion and consensus. After reviewing the full text of the included studies, we extracted the data with a predefined form including the following items: publication year, surname of the first author, country, cases number, tumor stages, therapy, and markers for macrophages, antibody source, sample locations, follow-up data and outcomes described in the studies. For the studies only with Kaplan-Meier survival curves, we extracted HRs and 95% CIs from the survival curves according to the methodology described by Tierney JF, et al [35] and via the Engauge Digitizer 4.1 software.

Raw HRs and 95% CIs were extracted from all the included studies, then analysed with specified command provided by the Stata version 12.0 (Stata Corporation, Texas, USA), and the pooled results were presented with forest plots [36]. Heterogeneity of the included studies was described with Chi-squared and p value. I-square (I2) index was tested to evaluate the degree of total variation among the studies. I2 > 50% or p < 0.10 was defined as significant heterogeneous, and we preferred to choose random-effects model for analyses in this situation. Otherwise, we performed the meta-analysis using the fixed-effects model. The pooled results were considered significant if the 95% CIs did not include 1. If HRs were provided with results derived from both univariate and multivariate analyses in the same study, multivariate models were preferred for increased accuracy. In order to evaluate the influence of potential missing data, we further performed “ trim and fill ” analysis [37]. Begg’s and Egger’s tests were also performed to evaluate the publication bias among the included studies [38, 39].

Shuiqng Wu is sponsored by China Scholarship Council (#201606370183). Bin-Zhi Qian is funded by CRUK Career Development Fellowship C49791/A17367 and ERC Starting Grant 716379. This work was undertaken in the MRC Centre for Reproductive Health which is funded by the MRC Centre grant MR/N022556/1.

The funder had no role in study design, data collection and analysis, decision to publish, or preparation of the manuscript.