Metastasis causes > 90% of cancer-related deaths, however our understanding of the molecular mechanisms that regulate endometrial cancer (EC) metastasis remains limited. Epithelial-to-mesenchymal transition (EMT) is a critical step in promoting the acquisition of invasive and stem cell-like properties of cancer cells [1–3]. During EMT, tumor cells lose the epithelial morphology and acquire a more migratory mesenchymal-like phenotype, through downregulation of epithelial markers and upregulation of mesenchymal markers [2, 3]. EMT can be induced by several transcription factors including Twist1, which repress E-cadherin expression and increase levels of Vimentin. Elevated levels of Twist1 are associated with increased metastasis and poor survival in EC patients [4].

Epigenetic alterations play a novel role in the regulation of EMT and metastasis [5–7]. Multiple myeloma SET domain (MMSET, also known as NSD2 or WHSC1) catalyzes the dimethylation of lysine 36 on histone H3 (H3K36me2), resulting in aberrantly high global levels of H3K36me2, a mark associated with active transcription [8–10]. MMSET epigenetically activates Twist1 to promote EMT in prostate cancer [11]. MMSET is upregulated in EC through unknown mechanisms, and its overexpression has been correlated with higher grade, advanced stage and poorer patient survival [12]. MicroRNAs (miRNAs) serve as a class of oncogenes or tumor suppressors by binding to the 3′-untranslated region (UTR) of target mRNAs. However, little is known regarding the function of MMSET and the mechanisms underlying the regulation of its expression in EC.

We show that MMSET is a tumor promoter in EC, and the loss of miR-34a, miR-424 and miR-513 contributes to the overexpression of MMSET and aggressive phenotypes of EC cells. 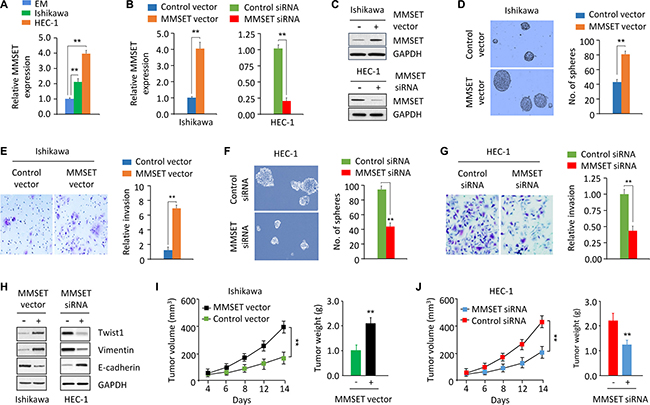 MMSET acts as an upstream regulator of Twist1 to induce EMT and invasion in prostate cancer [11]. To test whether the tumor-promoting effects of MMSET are mediated by Twist1 in EC, we examined the protein expression of Twist1 and its downstream effectors Vimentin and E-cadherin in EC cells following either MMSET overexpression or knockdown. Western blotting analysis revealed that Twist1 and Vimentin levels were increased, while the expression of E-cadherin was decreased in Ishikawa cells after transient MMSET overexpression (Figure 1H). Consistent with these results, knockdown of MMSET via siRNA reduced Twist1 and Vimentin expression, whereas induced E-cadherin expression in HEC-1 cells (Figure 1H).

To evaluate whether MMSET promotes EC cell invasion and sphere formation by regulating Twist1 expression, we co-transfected MMSET expression vector together with Twist1-specific siRNA into Ishikawa cells. We found that Twist1 mRNA expression was increased in response to upregulation of MMSET, but was decreased after knockdown of Twist1 (Figure 2A). The scattered morphology induced by MMSET overexpression was partially reverted by Twist1 silencing, resulting in a more epithelial-like appearance (Figure 2B). The downregulation of Twist1 significantly reduced MMSET-mediated invasion and sphere formation (Figure 2C and 2D). MMSET-induced Vimentin expression in Ishikawa cells was decreased following Twist1 silencing, and MMSET-mediated E-cadherin repression was reversed upon Twist1 siRNA transfection (Figure 2E). These data suggest the oncogenic role of MMSET in EC cells, and that Twist1 is required for MMSET-induced sphere formation, EMT and invasion. 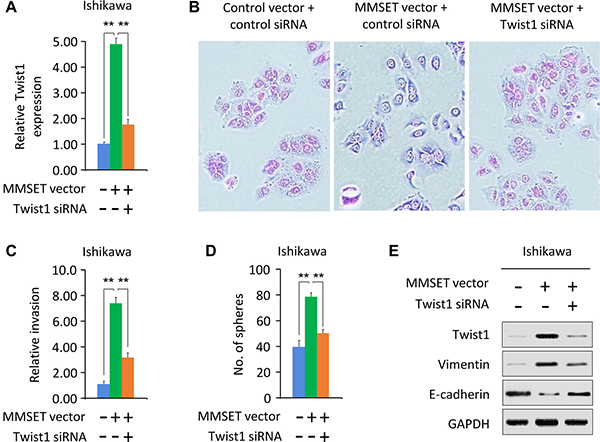 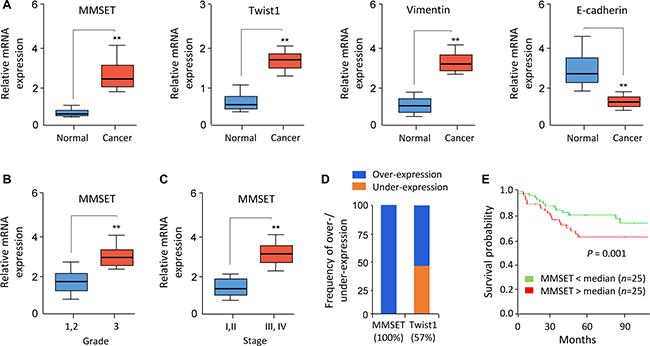 We asked whether miRNA inhibition is responsible for MMSET overexpression observed in EC. First, we performed in silico analysis using target prediction databases (TargetScan and miRDB) to identify potential miRNAs that are computationally predicted as regulators of MMSET. Then, these predicted miRNAs were overlapped with a set of miRNAs that are significantly repressed in highly invasive EC cells [16], leading to the identification of 3 miRNAs (miR-34a, miR-424 and miR-513) (Figure 4A). 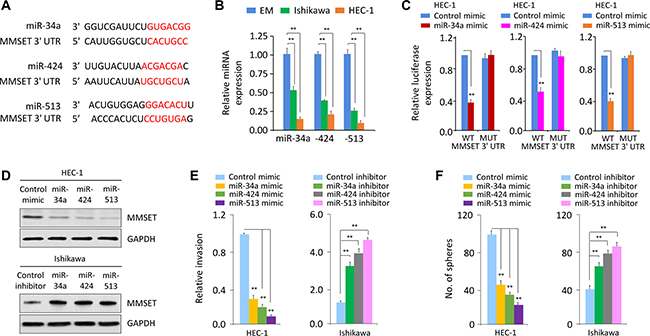 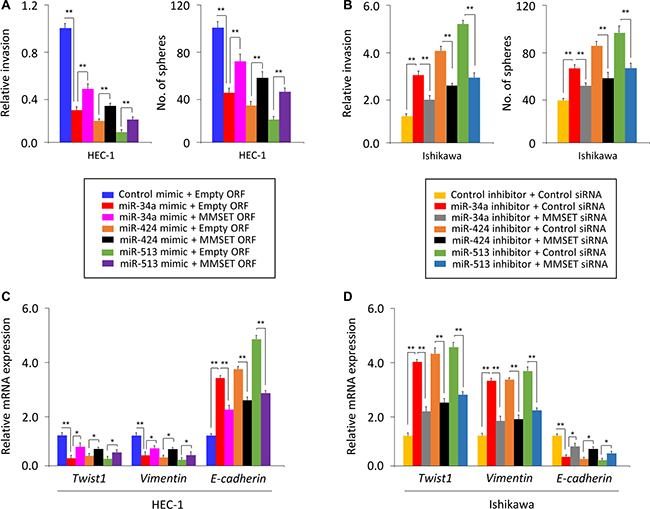 Figure 5: miR-34a, miR-424 and miR-513 inhibit EMT, invasion and the sphere-forming ability of EC cells through targeting MMSET. (A) miR-34a/miR-424/miR-513 mimic or control mimic was co-transfected into HEC-1 cells, together with (or without) MMSET cDNA vector lacking the 3′-UTR region. (B) miR-34a/miR-424/miR-513 inhibitor or control inhibitor was co-transfected into Ishikawa cells, together with (or without) MMSET siRNA. Cell invasion and sphere formation assays were performed. (C and D) qPCR analysis of indicated genes in HEC-1 (C) and Ishikawa (D) cells treated as described above. *P < 0.05, **P < 0.01. 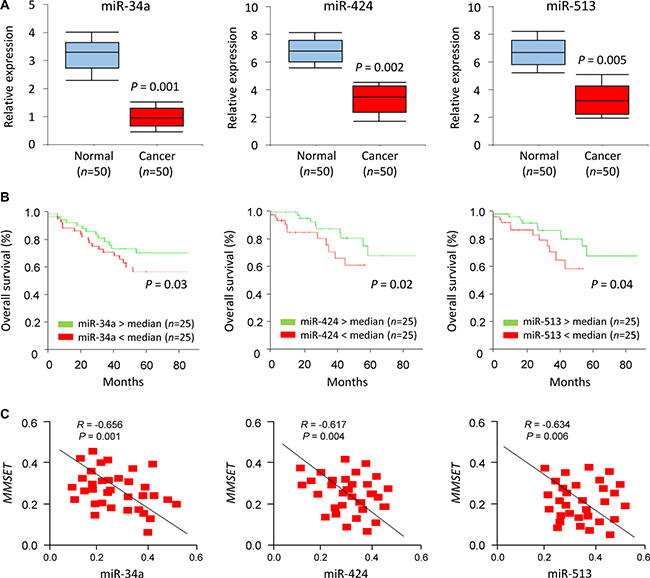 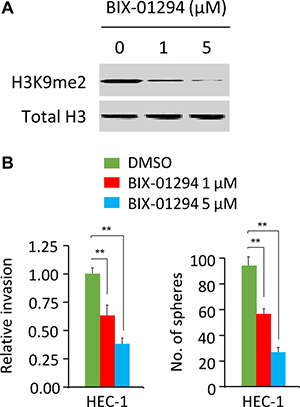 The histone methyltransferase MMSET is frequently overexpressed in a wide range of cancer types and plays an essential role in tumorigenesis and metastasis [9, 15, 16]. In this study, we have uncovered for the first time that overexpression of MMSET contributes to the stem cell-like and invasive properties of EC cells by upregulating Twist1, and specific inhibition of MMSET activity by BIX-01294 inhibits EC cell invasion and sphere formation. We also found that repression of miR-34a/miR-424/miR-513 upregulates MMSET levels, thus promoting the invasion and sphere-forming ability of EC cells.

Multiple independent studies have demonstrated that MMSET is involved in regulating cancer tumorigenicity and metastasis [17–19]. For example, MMSET promotes cell cycle progression through direct transcriptional upregulation of NEK7, which is a downstream target gene of MMSET in squamous cell carcinomas of the head and neck [17]. MMSET induces multiple myeloma cell growth through silencing of miR-126* and the subsequent overexpression of c-MYC, a target of miR-126* [18]. Moreover, MMSET interacts with NF-κB directly to activate the expression of NF-κB target genes (including interleukin-6, vascular endothelial growth factor A, cyclin D, Bcl-2 and Survivin) in prostate cancer cells [19]. Further investigation of the mechanism by which MMSET activates Twist1 or other EMT-associated molecules in EC cells is worthwhile.

miR-34a and miR-424 are reduced and thought to be tumor suppressors in EC [21, 22]. Consistent with these studies, we found low levels of miR-34a and miR-424 in EC cell lines and EC patient tissues, and these low expressions correlated with a poorer prognosis in EC. Furthermore, in the present work, we provide new evidence that miR-513 can suppress EC cell sphere formation and invasiveness by targeting MMSET.

In conclusion, our results demonstrate that MMSET exerts tumor-promoting effects in EC cells, and the loss of miR-34a, miR-424 and miR-513 enhances MMSET expression in EC. This study also suggests that pharmacological inhibition of MMSET with BIX-01294 might be a promising therapeutic approach for EC.

The human EC cell lines Ishikawa and HEC-1 were grown in DMEM/F12 medium (Invitrogen, Carlsbad, CA) supplemented with 10% fetal bovine serum (FBS, Invitrogen, Carlsbad, CA). All fresh cell lines were purchased from the JCRB Cell Bank (Osaka, Japan). All the cell lines used in this study were within six passages after receipt. The cell lines were not authenticated as they came from national repositories. These cell lines were routinely tested by PCR for mycoplasma contamination by using the following primers: Myco_fw1: 5′-ACACCATGGGAGCTGGTAAT-3′, Myco_rev1: 5′-CTTCATCGACTTTCAGACCCAAGGCAT-3′. The immortalized human endometrial epithelial EM cell line was generated and extensively characterized by Satoru Kyo (Shimane University, Japan) [23]. BIX-01294 was purchased from Sigma-Aldrich (St. Louis, MO). When reaching 50% confluence, HEC-1 cells were treated with different concentrations of BIX-01294 for 24 hours.

Total RNA was extracted using TRIZOL reagent (Invitrogen, Carlsbad, CA) according to the manufacturer’s instructions. cDNA was synthesized using the PrimeScript RT reagent kit (Takara, Japan). Real-time PCR was conducted by using ABI PRISM 7000 Sequence Detection System (Applied Biosystems). The primer sequences for mRNA detection were purchased from Applied Biosystems. miR-34a, miR-424 and miR-513 expression was measured using the NCode miRNA qRT-PCR analysis (Invitrogen, Carlsbad, CA) following manufacturer-recommended protocols. Forward primers are the exact sequences of the mature miR-34a, miR-424 and miR-513. For normalization, GAPDH and U6 were used as endogenous controls to normalize mRNA and miRNA expression levels. Results were expressed as fold change in expression levels relative to those of respective controls, the average value of which was taken as 1.

Transwell invasion assay was performed as previously reported [24–26]. EC cells were grown to 50% confluence and transfected as indicated. After 24 hours, cells (5 × 104) were seeded into the upper chamber of Boyden chambers coated with Matrigel in 24-well plate with 8.0 μm pores (Corning, NY). Complete medium with 10% FBS (700 μl) served as a chemoattractant in the bottom chamber. After incubation for 24 hours, the cells on the Matrigel side of the inserts were removed by cotton swab. The inserts were fixed in methanol and stained with Giemsa. The number of invaded cells attached to the other side of the insert was counted under a microscope. Relative invasion was expressed as the fold change relative to respective control.

Experiments involving mice were performed under protocols approved by the Animal Care and Use Committee of Sun Yat-Sen University Cancer Center. Four-week-old of female BALB/c mice were acquired from Shanghai Laboratory Animal Center (Chinese Academy of Sciences, Shanghai, China). The tumor generation assay in vivo was performed as previously described [24]. In brief, EC cells were transfected with MMSET expression vector, MMSET siRNA or their respective controls, respectively. 48 hours after transfection, 1 × 106 cells were suspended in phosphate-buffered saline and then injected subcutaneously into nude mice. Tumor length and width were measured using calipers, and tumor volume was calculated using the formula: tumor volume = length × width2 × 0.5.

Fresh human EC tissues and the corresponding adjacent normal endometrial samples were collected from 50 patients who underwent surgical resection at the Sun Yat-Sen University Cancer Center, China. This study was approved by the Clinical Research Ethnics Committee of Sun Yat-Sen University. Informed consent was obtained from all patients. All experiments were performed in accordance with relevant guidelines and regulations. All tissue specimens were snap-frozen immediately in liquid nitrogen after harvesting and stored at −80°C.

The results were reported as mean ± SEMs of at least three independent experiments. Statistical analysis was conducted using 2-tailed Student’s t-test or 1-way ANOVA. Differences in mRNA or miRNA expression between EC tissues and normal endometrial tissues were evaluated using the Mann-Whitney U-test. The log-rank test was used to compare differences between the survival curves. P < 0.05 was considered statistically significant.

3. Kaufhold S, Bonavida B. Central role of Snail1 in the regulation of EMT and resistance in cancer: a target for therapeutic intervention. J Exp Clin Cancer Res. 2014; 33:62.