We examined the usefulness of evaluating tumor size determined using preoperative magnetic resonance imaging (MRI) for prognosis in patients with endometrial carcinoma (EC). Patients (N = 184) with EC who underwent surgery at Shimane University Hospital between 1997 and 2013 were enrolled. We investigated the association between the tumor size of EC assessed prior to surgery by MRI (anteroposterior [AP], transverse [TV], and craniocaudal [CC] diameters) and various clinical parameters including deep myometrial invasion and lymph node metastases. We subsequently examined the prognostic significance of tumor size in patients with EC. Survival analysis was performed using the Kaplan-Meier method, and prognostic factors were evaluated using the Cox’s proportional hazards regression model.

Multivariate analysis identified increased AP diameter as an independent negative prognostic factor for overall survival (OS) (P = 0.037). A long AP diameter has prognostic value and the potential to be a predictive marker for surgical outcomes in patients with EC. Furthermore, AP diameter exhibited the greatest area under the curve (AUC) (0.727) for deep myometrial invasion, and CC diameter had the greatest AUC for lymph node metastases (0.854). Evaluation of tumor size parameters may aid in the identification of high-risk populations, which could improve treatment selection and patient outcomes.

Endometrial cancer (EC) is the most common gynecologic malignancy, with an annual incidence of 320,000 and a mortality rate of 76,000 deaths per year worldwide [1, 2]. The International Federation of Gynecology and Obstetrics (FIGO) staging system is used by clinicians for prognostication and to guide surgical management. Interestingly, patients with the same disease stage may experience very different clinical courses [1, 3]. To understand the reasons for these differences, many investigators have evaluated the influence of various tumor attributes, such as histological subtype and FIGO stage, grade, depth of myometrial invasion, and vascular invasion on prognosis [3–5]. Unfortunately, preoperative evaluations generally require invasive, costly, and time-consuming procedures such as fractional curettage or hysteroscopic assessment [1, 6–8]. Early detection and improvements in surgical techniques and chemotherapies have contributed to better prognoses. However, precise predictions of prognosis remain a challenge despite being necessary for guiding clinical decision-making regarding optimal treatment.

Previous studies on cervical, breast, and renal cancers have demonstrated that increased tumor size is associated with a poorer prognosis [9–12]. In their study, Gusberg et al. [13] reported that tumor size was an indicator of prognosis in EC and used uterine size as a surrogate marker for tumor size [13]. Many studies have since reported conflicting results when examining the usefulness of tumor size as a prognostic indicator. Several studies have demonstrated that tumor size is significantly associated with lymph node metastases and survival [14–16], leading them to recommend the addition of tumor size to routine assessments for identifying low-risk endometrial cancer patients [17]. Other studies, however, have challenged such a correlation [18, 19]. Moreover, the FIGO staging system does not mention tumor size for endometrial cancer diagnosis [20]. Soliman et al. [21] outlined factors used to guide surgical decision-making for patients with endometrial cancer and focused on the indications for lymphadenectomy; interestingly, the authors did not consider tumor size as part of their survey [21].

The advantages of evaluating tumor size include ease of evaluation and the lack of a need for extra resources or a skilled pathologist. In contrast, intraoperative assessment of other prognostic indicators such as grade, myometrial invasion, and lymph metastases require well-trained pathologists and additional resources, which can vary depending on whether frozen or paraffin sections are required [22, 23]. Magnetic resonance imaging (MRI) is another modality that can be used to assess tumor size; however, to our knowledge, studies examining the reproducibility of tumor size measurements by MRI are lacking. Moreover, there is currently no established optimal threshold value for risk assessment based on tumor size. 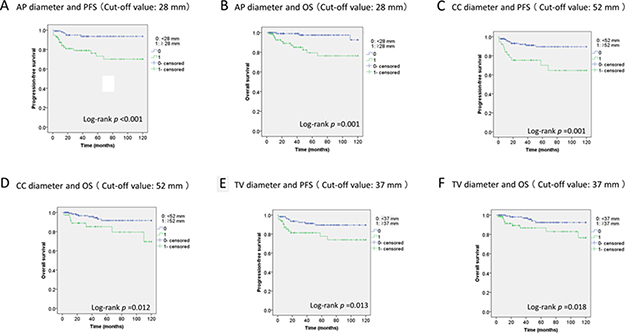 Univariate and multivariate analyses of prognostic factors in patients with EC

Using the above threshold values for each tumor size measurement, ROC curves indicating the effectiveness of the diameter measurements for predicting deep myometrial invasion (Figure 2A) and lymph node metastases (Figure 2B) demonstrated that the AP diameter had the greatest AUC (0.727) for deep myometrial invasion, while the CC diameter had the greatest AUC for lymph node metastases (0.854).

To our knowledge, this is the first cohort study to demonstrate that tumor size (in particular, the AP tumor diameter) is a robust indicator of prognosis in patients with EC. ROC curve analysis revealed that the optimal thresholds for predicting prognosis were AP diameter > 28 mm, CC diameter > 52 mm, and TV diameter > 37 mm. Furthermore, we showed that tumor size is significantly associated with deep myometrial invasion (especially AP diameter, threshold value: 28 mm), and lymph node metastases (especially CC diameter, threshold value: 52 mm). While the prognosis of EC is typically favorable [24], it is poor in some patients. The association between tumor size and prognosis and other clinical prognostic indicators has garnered increasing attention recently. In previous studies, the probability of myometrial invasion increases with the tumor size [14, 15]. There are two reasons for this. First, when the tumor is growing, it invades the myometrium because there is limited space in the uterine cavity. Second, when the tumor invades the myometrium, the cancer cells first invade the lymphatic or vascular system and next invade the lymph nodes. Previous studies have demonstrated that deep myometrial invasion correlates with surgical factors such as lymph node metastases and distant metastases in EC [25]. However, accurate assessment of myometrial invasion is difficult to obtain using only MRI. For example, it is not uncommon to find that cancers that are classified as stage IA preoperatively turn out to be stage IB postoperatively. If the preoperative diagnosis is uncertain, then the surgical method may be inadequate. For example, whereas pelvic lymphadenectomy is appropriate for stage IB cases (deep myometrial invasion), this should be omitted in patients with a preoperative diagnosis of stage IA and G1. Therefore, it is essential to identify novel factors that are associated with deep myometrial invasion and can be evaluated preoperatively. Tumor size is a potentially useful marker for this purpose that can be obtained with relatively little effort and low interobserver variability.

The same is true of lymph node metastasis. Enlarged lymph nodes seen on preoperative MRI are not always found to be the result of metastasis postoperatively. Several surgical or pathological risk factors for predicting deep myometrial invasion or lymph node metastases have been reported for EC including histologic type, grade, and tumor extent [26–29]; one model used tumor size greater than 2 cm according to gross examination of hysterectomy tissue as a predictive factor [26]. Limitations of these models include reliance on surgical and pathological outcomes that cannot be obtained preoperatively. However, direct comparison of macroscopic tumor diameter measurements between fresh tissue and preoperative MRI is difficult because of differences in the planes of the section that can be obtained for tumor measurements and possible distortion of tumor tissue in vivo compared to ex vivo. As a result, the optimal tumor size threshold values may not be transferable from in vivo MRI-based to ex vivo gross section-based measurements. Despite this, both in vivo and ex vivo studies consistently provide evidence of the metastatic potential and negative prognostic impact of large tumor size in EC [26]. Sigmund et al. [29] demonstrated that AP tumor diameter > 2 cm and CC tumor diameter > 4 cm as measured using MRI were associated with prognosis; these results are similar to the findings of the present study [29].

We previously reported that loss of MMR protein expression was identified in 42 of 149 (28.2%) patients with endometrial cancer, and microsatellite instability is a biomarker for immune checkpoint inhibitors in endometrioid endometrial cancer [37]. In this study, we analyzed the relationship between tumor size and prognosis in patients with MMR deficiency (N = 42). However, there were no significant differences among them (data not shown). MMR deficient endometrioid carcinoma may behave in a different way in terms of tumor size, but we think that the small sample size may affect this result. Therefore, we must investigate the tumor size significance in a large population of patients with MMR deficiency in the future. Furthermore, other preoperative biomarkers such as p53, hormone receptor, and DNA ploidy status in preoperative biopsies should also be evaluated in the future.

This study was approved by the Ethics Committee of Shimane Medical University. We investigated 184 patients with EC who underwent surgery at the University Hospital of Shimane between 1997 and 2016. Patients with insufficient data, nonsurgical treatment, secondary malignancies, hematologic diseases, and those who lacked MRI data were excluded.

Diagnoses were made according to conventional morphological examinations of hematoxylin and eosin-stained sections, and tumors were classified according to the World Health Organization classification system. The FIGO classification system was used for tumor staging and grading. All patients underwent surgery (total abdominal hysterectomy and bilateral salpingo-oophorectomy), and those with cancers greater than stage 1a and grade 1 underwent pelvic lymph node dissection and were administered adjuvant platinum and taxane chemotherapy. Patients with stage 1a and grade 1 EC did not undergo pelvic lymph node dissection or receive adjuvant chemotherapy.

Preoperative MRI was performed 60 days before surgery in all cases. All MRI images were reviewed by two independent radiologists who were blinded to patient data and who conducted assessments for tumor size and histological diagnosis.

The radiologists recorded their assessments of MRI images on a standardized form. Tumor size measurements were made along 3 orthogonal planes: AP and TV diameters were measured using axial contrast-enhanced T1-weighted oblique images (at right angles to the long axis of the uterus), and the CC diameter was determined using sagittal T2-weighted images (Figure 3A, 3B).

ROC curve analysis was conducted to establish the threshold value for all tumor size measurements required for diagnosing deep myometrial invasion and lymph node metastases. The sensitivity and specificity of each outcome were plotted to generate ROC curves. The threshold value was selected as the value that was closest to the point with both maximum sensitivity and specificity.

ROC analysis was used to determine the usefulness of the three tumor size measurements for the diagnosis of deep myometrial invasion and lymph node metastases. The optimal threshold values (rounded to the nearest centimeter) were chosen as those producing the best separation of the Youden index between the groups.