Rapid advances in tumor immunology have improved our understanding of key regulators that mediate antitumor T cell responses, leading to the development of new immunotherapeutic approaches targeting programmed cell death 1 (PD-1). PD-1 is one of the negative immune regulators which play an essential role in immunosuppression of antitumor immunity in local tumor environment. PD-1 is expressed on the surface of activated T cells, and its ligand, PD-L1 is broadly displayed on antigen presenting cells and tumor cells [4]. The ligation of PD-1 and PD-L1 inhibits T cell proliferation and activation and induces apoptosis of tumor antigen-specific T cells to inhibit antitumor immunity and escape immune surveillance [4]. Emerging clinical data have demonstrated durable clinical activity and safety of PD-1 blockade agents in diverse malignancies including melanoma, non-small cell lung cancer, renal cell carcinoma, urothelial cancer, Hodgkin lymphoma, head and neck cancer and mismatch repair deficient colorectal cancer [5]. The remarkable success of PD-1 blockade immunotherapy has led to the extensive research effort to discover prognostic and predictive markers and to evaluate potential therapeutic activity of antiPD-1 immunotherapy in other malignancies. Recent clinical data have demonstrated that presence of CD8 tumor infiltrating lymphocytes (TILs) and PD-L1 expression in tumor microenvironment have not only prognostic implication but also predict clinical response to PD-1 blockade immunotherapy in a number of malignant tumors [6, 7]. However, very little is known about the immune microenvironment of cholangiocarcinoma.

We have performed a retrospective analysis of a single institution cohort of extrahepatic cholangiocarcinoma patients with expression of TILs and PD-L1 in tumor microenvironment to improve our understanding of their significance and to provide potential rationale for the utility of PD-1 blockade immunotherapy option in cholangiocarcinoma.

A total of 44 patients who underwent surgical resection of extrahepatic cholangiocarcinoma were identified (Table 1). The median age of the patients was 67 years (range 42–86) and 52.3% were male. Eleven (25%) patients had perihilar and 33 (75%) had distal tumor. A majority of tumors (84.0%) were well to moderately differentiated and R0 resection was done on 37 (84.1%) patients.

TIL and PD-L1 expression in tumor microenvironment

Tumor microenvironment was evaluated using immunohistochemical staining with anti-CD8 and PD-L1 antibodies. PD-L1 expressing tumor and immune cells and CD8+ lymphocytes were identified in intratumoral and peritumoral area (Figure 1). Intratumoral CD8+ TILs were observed in 30 (68.2%) tumor samples. While 10 (90.9%) out of 11 perihilar tumors have intratumoral CD8+TIL, 20 (60.6%) out of 33 distal tumors have it. PD-L1 expression was evaluated only in 34 tumors (perihilar: 9, distal: 25) due to lack of sufficient tumor tissues in the remaining samples. While PD-L1 was expressed in 32 (94.1%) tumor samples, PD-L1 expression on cancer cells was observed in only 10 tumors (22.7%). All 10 tumors with PD-L1 expressing cancer cells had CD8+ TIL infiltration. Two of them are perihilar and the rest are distal disease. Previous reports suggested CD45RO expressing immune cell infiltration as an independent prognostic marker in gastrointestinal cancer including colorectal and gastric cancer [8, 9]. Tumor infiltrating CD45RO+ immune cells were also evaluated, and they were detected in 21 (47.7%) of cholangiocarcinomas. Fourteen tumors have CD8+CD45RO+ T cells (memory CD8 T cells) in 21 extrahepatic tumors with CD45RO+ infiltrating immune cells. 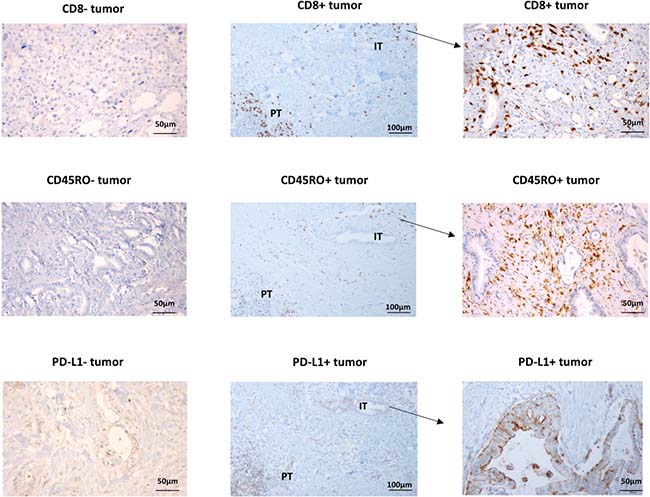 The relationship between clinicopathological features and immune cell infiltration was analyzed (Supplementary Figure 1). The presence of CD8+ TILs or CD8+CD45RO+ TILs was not associated with clinical staging or tumor differentiation in extrahepatic cholangiocarcinoma. No correlation between PD-L1 expression and clinical staging or tumor differentiation was observed (data not shown).

Figure 2: Kaplan–Meier analysis of relapse free survival and overall survival based on the presence of CD8, CD45RO or CD8CD45RO tumor infiltrating lymphocytes.

In our study, intratumoral CD8 TILs were observed in 68% of extrahepatic cholangiocarcinomas which are similar to the frequency observed in the previous report [10]. Interestingly, only CD8+CD45RO+ TIL but not CD8+ TIL had prognostic significance. The presence of memory (CD45RO+) CD8 TILs has been reported as a favorable prognostic marker in several cancers [12]. Our results did not demonstrate prognostic value of CD8 TILs. This was in contrast with other cancers where improved survival was associated with CD8 TILs [13]. One possible explanation for the discrepancy is the presence of immune suppressive cells such as regulatory T cells (Treg)s and suppressor CD8 T cells. Previous meta-analysis data showed CD8/Tregs (FOXP3+) ratio produced more impressive hazard ratio than CD8 TILs alone [13], and Tregs but not CD8 TILs were reported as independent prognostic markers in cholangiocarcinoma [14]. In addition, recent data demonstrated a majority of CD8 suppressor cells do not express CD45RO [15], which may explain our result that memory type CD8 TIL (CD8+CD45RO+) but not CD8 TIL was associated with significant improvement in OS. Unfortunately, we could not examine FOXP3 due to insufficient tumor samples.

We did not observe any correlation between PD-L1 expression on cancer cells and overall survival which is consistent with previous reports [11, 16, 19]. However, other studies suggested PD-L1 expression as a negative prognostic factor in cholangiocarcinoma [20, 21]. This discrepancy may be explained by small sample size of each study ranging from 27–70 cases. In addition, they were all retrospective studies conducted mainly from single institutions.

Tissue sections (4μm thick) were immersed in citrate buffer solution for antigen retrieval and boiled in microwave for 10 min and washed in buffer solution. They were incubated with primary antibody including anti-CD8 (C8/144B, DAKO), anti-CD45RO (UCHL1, DAKO) and the anti-PDL1 mouse IgG1 (clone 5H1; Thompson) antibodies for 1 hr at room temperature and then washed in buffer solution. After 1 hr of incubation in the secondary antibody, the sections were incubated with streptavidin-biotin-complex (DAKO). Appropriate positive and negative controls were used. Stained tumor samples were reviewed and enumerated by a GI pathologist. For estimation of positive reaction, only the strongly stained nuclei were counted as a percentage of all tumor nuclei. Less than 1% were estimated as negative. Samples with greater than 1% of cells exhibiting strong nuclear staining were considered positive.

Fisher’s exact test was used to assess the association between TILs and clinicopathological characteristics. The association between expression of CD8/CD45RO or PD-L1 and survival was investigated using Kaplan-Meier survival, and Log-rank testing was performed to determine the significance of observed difference. COX proportional hazard regression was used for multivariate analysis. All statistical analyses were performed using IBM SPSS Statistics 24. All statistical tests used a significance level of 5%.

Richard Kim received honorarium from Lilly. The other authors report no conflicts of interest for this work.