Lung cancer is a fatal disease with a high mortality rate. The perinuclear reorganization of keratin 8 (K8) is an important biochemical phenomenon reflecting changes in the physical properties of metastatic cancer. However, there is not much of information about the regulatory molecules involved in phosphorylation and perinuclear reorganization of K8.

Metastasis is responsible for more than 90% of all cancer-related deaths [3]. Nevertheless, the processes of invasion and metastasis are still not well understood leading to hindrance in the development of new therapeutics targeting metastasis [3]. Recent research has attempted to understand the physical properties of metastatic cancer cells and to screen compounds capable of modulating the physical properties of metastasizing cancer cells [4–9].

The importance of viscoelasticity in several metastatic cancer cell lines including A549 adenocarcinoma cells is related to keratin phosphorylation and reorganization [4, 10–12]. For example, shear stress that induces reorganization of the keratin intermediate filament network requires phosphorylation of keratin 8 (K8) in A549 lung cancer cells by protein kinase C [13]. In addition, several compounds, including sphingosylphosphorylcholine (SPC) has been reported to induce perinuclear reorganization of K8 in PANC-1 human epithelial pancreatic cancer cells [4, 6, 14, 15]. The resulting changes in the mechanical deformability of cells have been examined as possible pathways that facilitate migration and increase in the metastatic competence of pancreatic tumor cells [12, 14, 16, 17].

YdjC chitooligosaccharide deacetylase homolog (YDJC) belongs to YDJC family. YDJC catalyzes the deacetylation of acetylated carbohydrates, an important step in the degradation of oligosaccharides [21]. There exists no information about the biochemical properties of YDJC enzyme. A few genetic studies have suggested that YDJC is involved in several diseases including ulcerative colitis, psoriasis, and Crohn’s disease [22, 23]. However, there are no reports on the role of YDJC in carcinogenesis and progression of cancer, especially lung cancer.

In this report, we describe SPC-induced YDJC expression in lung cancer cells. YDJC is involved in SPC-induced phosphorylation and reorganization of K8 leading to enhanced migration and invasion. CDC16 binds to YDJC to inhibit actions of YDJC. Gene silencing of CDC16 leads to phosphorylation and reorganization of K8 via ERK activation. YDJC overexpression might be involved in the progression of lung cancer. 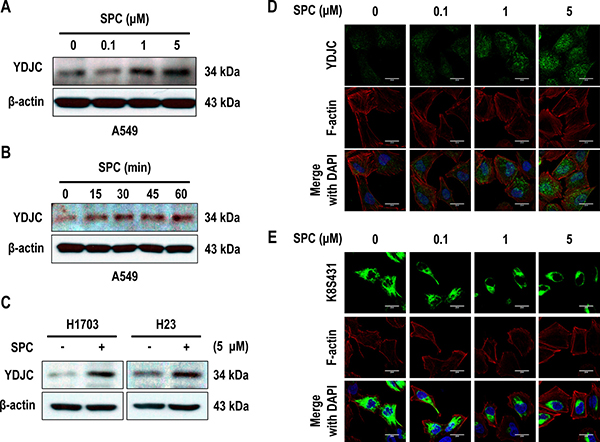 YDJC is involved in SPC-induced events of lung cancer cells 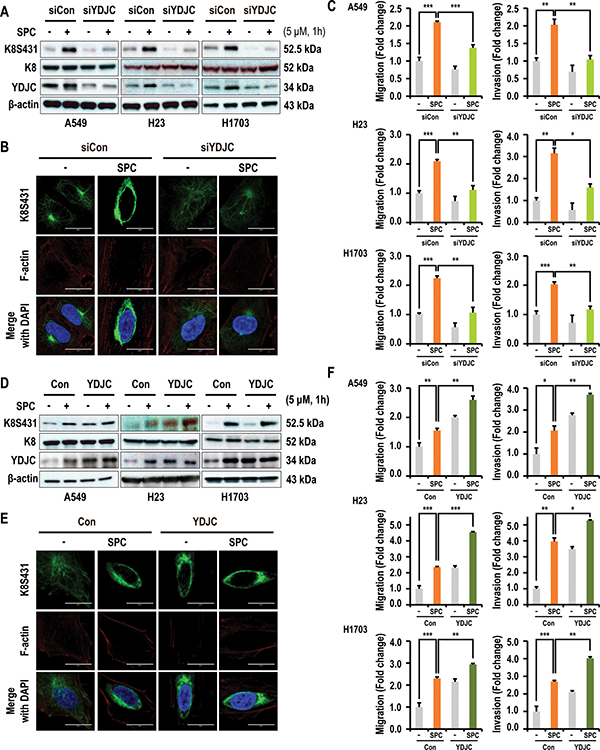 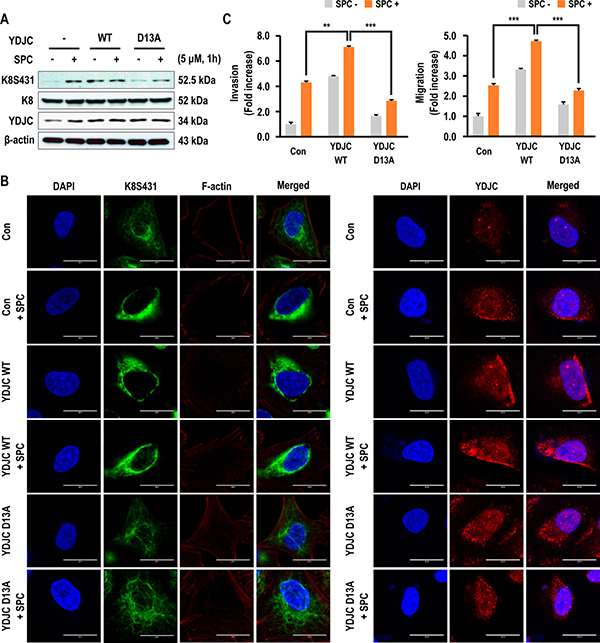 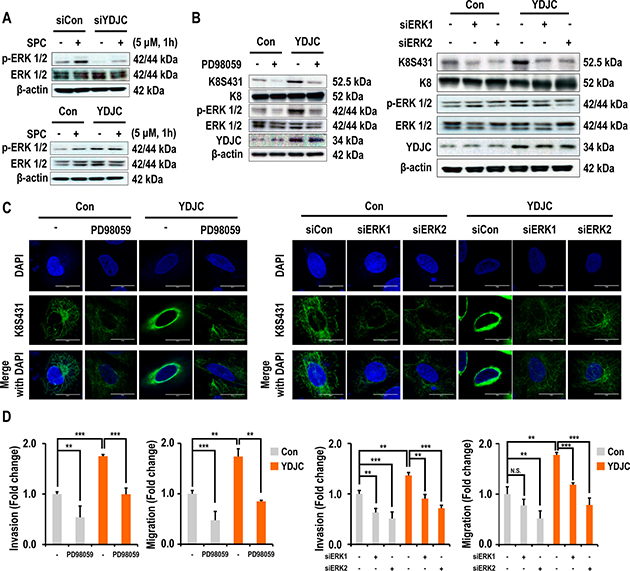 To elucidate the involvement of YDJC in the SPC-induced events, we first tried to determine the proteins that binds with YDJC. Huttlin et al. reported that CDC16 binds to YDJC, so we confirmed the result by co-immunoprecipitation (co-IP) [26]. To confirm the binding, co-IP was performed using CDC16 antibody and YDJC antibody. Co-IP of YDJC with CDC16 was carried out without SPC treatment (Figure 5A). The interactions between YDJC and CDC16 were confirmed by confocal microscopy (Figure 5B). Although CDC16 was strongly expressed in the nucleus, it was also expressed in the cytosol, and YDJC expression was merged with CDC16 in the cytosol as well as in the nucleus (Figure 5B).

Involvement of CDC16 in SPC or YDJC-induced phosphorylation and reorganization of K8, migration, and invasion 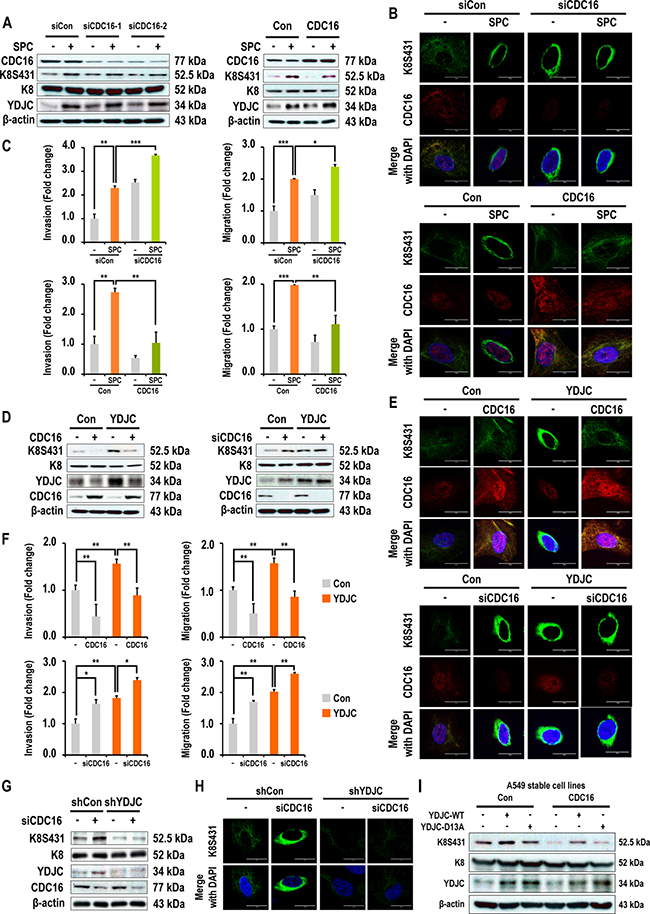 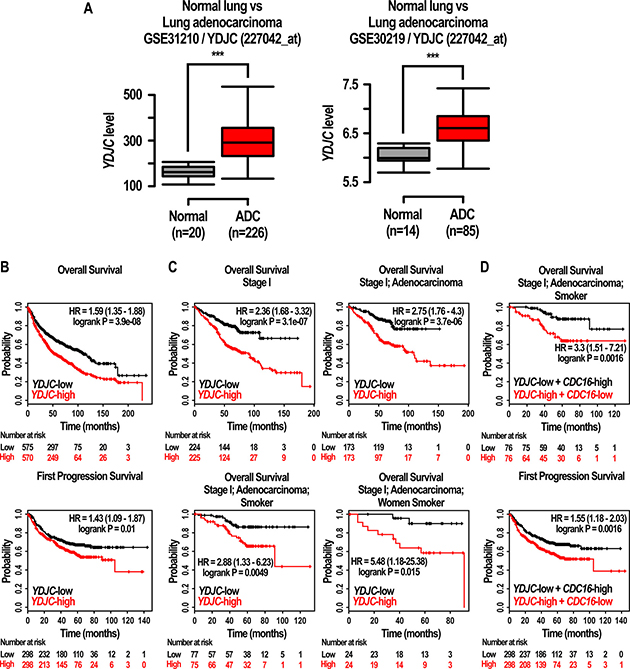 Viscoelasticity of metastatic cancer cells, such as PANC-1 cells, is regulated by SPC. The physical properties of several metastatic cancer cells are related to keratin phosphorylation and perinuclear reorganization [4, 6]. The molecular mechanisms involved in keratin phosphorylation and perinuclear reorganization are largely unknown although some kinases including ERK, JNK, and protein kinase C (PKC) are known to be involved in these events [6, 12, 14, 16].

We have been interested in finding new players involved in keratin phosphorylation and perinuclear reorganization, since these phenomena are correlated with viscoelasticity of metastatic cancer cells and identification of novel players involved in keratin reorganization might be a new target of controlling the metastasis of cancer cells [4, 8]. Previously, we have shown that FTY720 can change Young’s modulus coefficient in a PANC-1 cell by suppressing SPC-induced phosphorylation and reorganization of K8 via G protein coupled receptor 12 [8].

For the question that how is YDJC involved in keratin phosphorylation and reorganization? We speculate the possible interaction of YDJC with molecules affecting kinase pathways, such as ERK and JNK with subsequent phosphorylation of K8. Furthermore, CDC16 has been proposed as a binding partner of YDJC in breast cancer cells [26]. We confirmed the binding of YDJC to CDC16 by co-IP (Figure 5A). Deacetylase activity influences the binding of YDJC to CDC16 which is involved in SPC-induced events (Figure 5B).

It is interesting to note that YDJC binds directly to CDC16 (Figure 5A). CDC16 might activate PP2A leading to dephosphorylation of K8 via inactivation of ERK and JNK or directly [8, 14, 28]. Our data suggest that YDJC might block the CDC16’s action via suppressing ERK and JNK with subsequent phosphorylation and reorganization of K8 (Figure 6A, 6B). 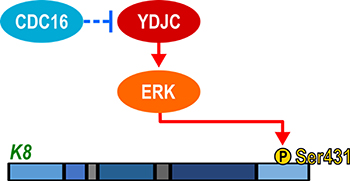 Another interesting possibility of YDJC is the direct modification of K8 by YDJC. The nature of substrates of YDJC is not yet clear, although YDJC is known as carbohydrate deacetylase. K8 undergoes O-GlcNAc (N-acetylglucosamine) modification [29, 30]. YDJC is a chitooligosaccharide deacetylase homolog. Chitooligosaccharide deacetylase hydrolyzes the N-acetamido groups on the nascent chitin chains [31]. It remains unclear if K8 will serve as a substrate for YDJC. For K8 to act as a substrate for YDJC, it must bind to YDJC and possess O-GlcNAc in K8 although not chitin. Interestingly, K8 has an O-GlcNAc residue. Therefore, it is necessary to study whether the N-acetyl moiety of O-GlcNAc of K8 is deacetylated by YDJC.

The collective findings indicate that YDJC is involved in SPC-induced events in A549 lung cancer cells by binding to CDC16. These results suggest that suppression of YDJC or boosting of CDC16 interaction with YDJC might be a novel strategy to prevent the malignant changes in the physical properties of metastatic cancer cells (Figure 8).

The invasion assay was performed using transwell inserts (Neuro Probe, Inc., Gaithersburg, MD, USA) coated with Matrigel (0.5 mg/mL), as described previously [30]. Cells (1 × 106 cells/mL) suspended in serum-free medium were added to the upper chamber of each insert. Medium containing 10% FBS was added to the lower chamber. After 16 h incubation, cells on the upper surface of the membrane that had not migrated were scraped off with cotton swabs. Cells that had migrated to the lower surface were stained using the Hema 3 staining system (Fisher Scientific, Houston, TX, USA), photographed, and the cells in four randomly selected fields were enumerated at 20X magnification. All the experiments were repeated at least three times with at least two replicates each time.

Migration assays were performed in transwell inserts coated with 10 μg/mL fibronectin. Cells (1 × 106 cells/mL) suspended in serum-free medium were added to the upper chamber of each insert as described previously [32]. The lower chamber received a medium containing 3% FBS. After 6 h incubation, A549 cells on the upper surface of the membrane that had not migrated were scraped off. Cells that had migrated to the lower surface were stained by Diff-quick and cells in four randomly chosen fields were enumerated at 20× magnification. All the experiments were repeated at least three times with at least two replicates each time.

Cells were transfected with a plasmid containing YDJC using JetPEI reagent (Polyplus-transfection) according to the manufacturer’s instructions. The universal negative plasmid was employed as the negative control.

Confocal microscopy was performed, as described previously [34]. Cells grown on coverslips and fixed in methanol for 10 min at room temperature were permeabilized with a 10 min wash with 0.1% Triton X-100 at room temperature, followed by several washes in PBS containing 3% BSA. Phospho-K8 and YDJC primary antibody were incubated with the A549 coverslips overnight at 4°C, after which the antibody was removed with four washes with PBS. Species-specific secondary antibodies conjugated with goat anti-mouse IgG antibody (Alexa Fluor 488, 1:500; Molecular Probes) were reacted with the coverslips for 1 h at room temperature followed by four washes with PBS. The final samples were mounted onto slides and visualized using confocal microscopy (Nikon, Tokyo, Japan).

Prognostic evaluation of YDJC was done as previously described [27, 36].

Data are expressed as the mean ± standard deviation (S.D.) of at least three independent experiments performed in triplicate. Student’s t-test was used to analyze the data, according to the following significance levels: *p < 0.05 and **p < 0.01.