Purpose: Substance P is a tachykinins family member with inflammatory effects. Higher circulating levels of substance P have been found in patients with liver diseases and in patients with higher severity of liver diseases. The objective of this study was to determine whether serum levels of substance P levels, prior to liver transplantation (LT) for hepatocellular carcinoma (HCC) are associated with one-year LT mortality.

Material and Methods: In this observational retrospective unicenter study were included patients with LT for HCC. Serum levels of substance P were measured before LT. The end-point of the study was one-year mortality after LT.

Conclusions: We believe that our study is the first study reporting data on circulating levels of substance P previously to LT for HCC, and an association between elevated levels of serum substance P before LT and mortality during the first year of LT.

Hepatocellular carcinoma (HCC) is the most frequent primary hepatic malignant tumor, and is the second cause of death attributable to cancer. Liver transplantation (LT), which eliminate the hepatic tumor and treats the hepatic insufficiency, is the treatment of choice in some patients with HCC [1–7].

The Tachykinin family has different members as neurokinin A (NKA), neurokinin B (NKB), substance P, and endokinins [8–16]. There are three tachykinin receptors (NK1R, NK2R, and NK3R). NKA has a preferential binding with NK2R, NKB with NK3R, and SP and endokinins with NK1R. Tachykinins are distributed by central and peripheral nervous systems, respiratory, urinary and immune systems, gut and blood vessels. Tachykinins are involved in the transmission of nociceptive responses, airway contraction, inflammation, vasodilation, plasma protein extravasation, smooth muscle contraction, and salivary secretion. Substance P is implicated in central and peripheral nervous systems injury, inflammatory bowel disease, psoriasis, migraine, and asthma [8–16].

In this observational retrospective unicenter study were included patients with LT for HCC in the Hospital Universitario Nuestra Señora de Candelaria (Santa Cruz de Tenerife, Spain) from January 1996 to January 2016. LT proceeded in all cases from brain death donor. The study was carried out by the approval of Institutional Review Board, and the written informed consent from the patients or their family members.

Previously, we determined serum levels of malondialdehyde [24], caspase-cleaved cytokeratin-18 [25], and sCD40L [26] in some of those patients. In the current work, serum levels of substance P were analyzed to determine their association with LT mortality at one year.

Serum blood samples were obtained before LT, and serum levels of substance P were determined at Laboratory Department of Hospital Universitario de Canarias (La Laguna, Spain). We used a competitive enzyme immunoassay designed to measure substance P in serum and other biological fluids (R&D Systems, Abingdon, UK). This immonoassay contains a synthetically derived human substance P peptide and has been shown to accurately quantitate this peptide. This kit can be used to determinate relative mass values for natural substance P. The assay was performed on an automatic analyser, the EVOLIS™ System, a self contained micoroplate processor for automated enzyme immunoassay testing.Substance P kit has an intra-assay coefficient of variation (CV) of 9%, an inter-assay CV of 15%, and a detection limit of 25 pg/ml.

Frequencies and percentages were used to report categorical variables (compared between groups by chi-square test), and medians and interquartile ranges to report continuous variables (compared between groups by Mann–Whitney test). A receiver operating characteristic (ROC) curve was carried out to determine the one-year mortality prognostic capacity of serum levels of substance P. A Kaplan-Meier survival analysis was performed using one-year LT survival (dependent variable), and serum levels of substance P lower/higher than 182 pg/mL (independent variable); and this cut-off of serum levels of substance P was selected in basis to Youden J index. A logistic regression analysis was carried out to determine the association between serum levels of substance P and one-year mortality of LT controlling for LT donor age; and the clinical impact of the predictor variables was estimated by Odds Ratio and its 95% confidence intervals (CI). Statistical analyses were performed by SPSS 17.0 (SPSS Inc., Chicago, IL, USA) and MedCal 15.2.1 (Ostend, Belgium), and P-values < 0.05 were considered statistically significant. 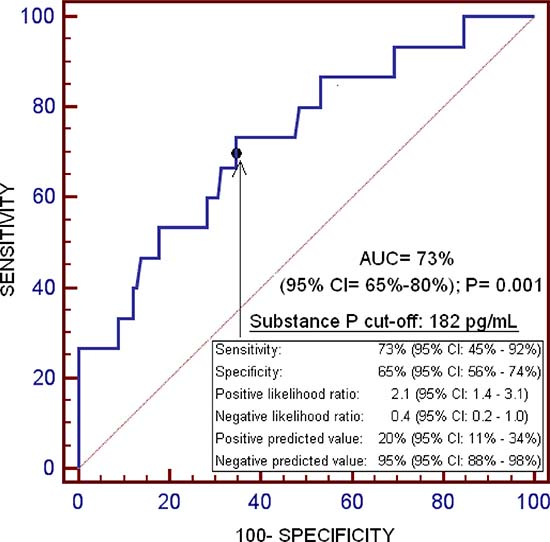 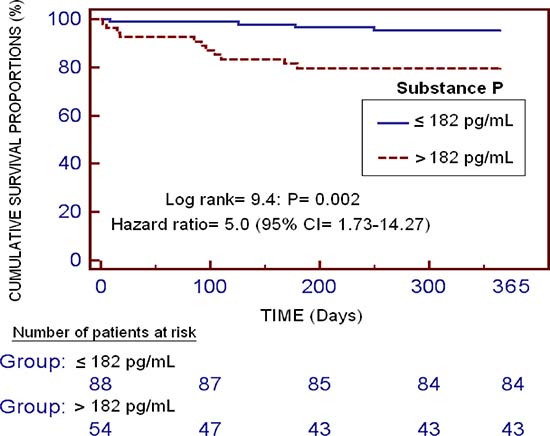 Substance P participates in inflammatory response due to that is involved in the production of inflammatory cytokines as interleukin (IL)-1, IL-6 and tumor necrosis factor-α [32–36], prostaglandins [37, 38], nitric oxide [39], and reactive oxygen species (ROS) [40, 41]. It is possible, that non-survivor LT patients remains with higher serum levels of substance P than survivor patients during the first year after LT.

The use of different agents to reduce the activity of substance P has been proven in different pathologies and have been associated with beneficial effects. In animal models of ischemic stroke, the administration of different NK1R antagonists reduced the formation of cerebral edema, permeability of the blood-brain barrier, infarct volume, and functional deficits [42–44]. The use of NK1R antagonists has reduced brain edema and has improved functional outcome in traumatic brain injury animal models [45, 46]. A review examined randomized controlled trials evaluating the effect of tachykinins receptors antagonist agents in patients with asthma, and found that these agents decreased the responsiveness of the airways and improved lung function [47]. Therefore, from a therapeutic perspective, the use of substance P antagonist agents in patients with LT for HCC could be explored to increase their survival.

We recognize some limitations of this investigation. First, there are no data on the circulating levels of inflammatory cytokines. Second, no serum samples were obtained to determine levels of circulating substance P during follow-up. Third, the sample size was not calculated and the non-survival group is relatively small. However was enough large to show an association between serum levels of substance P previously to LT for HCC and one-year liver transplantation mortality controlling for the age of LT donor. Non-survival patient group was relatively small to include other potential variables in the regression model; nevertheless, we included all variables with p-value lower than 0.10 in the comparison between non-survivor and survivor patient groups.

This study was supported by a grant from Instituto de Salud Carlos III (INT16/00165) (Madrid, Spain) and co-financed by Fondo Europeo de Desarrollo Regional (FEDER). The funders had no role in study design, data collection and analysis, decision to publish, or preparation of the manuscript.

12. Satake H, Kawada T. Overview of the Primary Structure, Tissue-Distribution, and Functions of Tachykinins and their Receptors. Current Drug Targets. 2006; 7:963–74.