Numerous evidence has indicated that excess weight is associated with an increased risk of mortality in patients in several cancer types including breast, colorectal, pancreatic, endometrial, and prostate cancer However, with respect to non-small cell lung cancer and upper aero-digestive cancer, evidence suggests that low body mass index (BMI) may increase the risk of mortality of these cancers, but a definitive link between premorbid BMI and overall survival in small cell lung cancer patients has yet to be fully explored. To investigate this possibility, we conducted a retro-spective of 173 small-cell lung cancer patients. Multivariate Cox analysis indicated that pretreatment overweight (BM I ≥ 23) was an independent prognostic factor for overall survival (OS) (Hazard ratio, = 0.58, 95% CI = 0.39–0.87, p = 0.008). In addition, meta-regression revealed that per-formance status (≤ 2) marginally interacted with increased BMI (p = 0.068). However, subgroup analysis showed that patients with a BMI ≥ 23 and performance status ≤ 2 had the best OS (Hazard ratio: 0.31, 95% CI: 0.16–0.61, p = 0.001). Premorbid BMI and performance status level are easy to measure and may provide physicians an additional measurement to predict a small-cell lung cancer patient’s survival. The data from the present study indicates that a, further large scale prospective study is warranted to better assess the association of pretreatment BMI and OS in small-cell lung cancer.

Small-cell lung cancer (SCLC) accounts for 15% of all lung cancers and is a highly aggressive tumor that is marked by early metastases and poor prognosis. Approximately 60–75% of patients with SCLC are diagnosed at later stages of disease progression [1–3]. While SCLC patients appear initially responsive to chemotherapy, most patients show cancer progression within months. Thus, research is urgently needed to identify predictive factors associated with improved prognosis. Previously, a meta-analysis study conducted by Wang et al. (2017) [4] revealed the association between body mass index (BMI) and mortality in non-small cell lung cancer (NSCLC) patients.

More than 50% of patients with advanced cancer have been diagnosed as having malnutrition despite having to meet a high nutritional demand due to an altered metabolic rate [5, 6]. Nearly 20% of cancer patients die of malnutrition induced by their tumors or from side effects from their treatments [7], and malnourished patients are at higher risk of poor prognosis and outcomes [8, 9]. Thus, the utility of a patient’s nutritional status—such as the rate of anemia [10] and BMI before treatment [11]—as a prognostic marker has been previously studied [12–14]. In addition, inflammation has been shown to play a prominent role in tumor progression and metastasis [15]. Inflammation factors, such as C-reactive protein, neutrophil-to-lymphocyte ratio (NLR) and platelet-to-lymphocyte ratio have extensively been characterized poor prognostic factor in various types of tumors [16–20].

Epidemiological studies have observed a significant inverse relationship between BMI and lung cancer incidence [21, 22]. Yun (2016) (N = 809) found BMI > 23 compared with BMI < 23 had significant lower risk of all-caused mortality (HR: 0.57, 95%CI: 0.38–0.86) in lung cancer patients [23]. In addition, a recent meta-analysis showed that being underweight was a risk factor for lung cancer, while excess weight provided a potential protective effect [24]. However, this meta-analysis did not assess the relationship specifically between BMI and mortality in SCLC patients. While many observational studies examined the relationship between BMI and mortality in patients with NSCLC, to the best, of our knowledge, such associations have not been extensively studied for SCLC, only reviewed in Inomata et al. (2016) [25]. In the present study, we evaluated nutritional status, inflammation markers, eastern cooperative oncology group performance status (ECOG PS), and basic patient data for their potential use as a available prognostic marker SCLC. Thus, the aim of our study was to retrospectively investigate the association between BMI and overall survival (OS) of SCLC patients, using data collected solely at Tri-Service General Hospital/National Defense Medical Center (TSGH/NDMC).

Analysis of factors related to OS 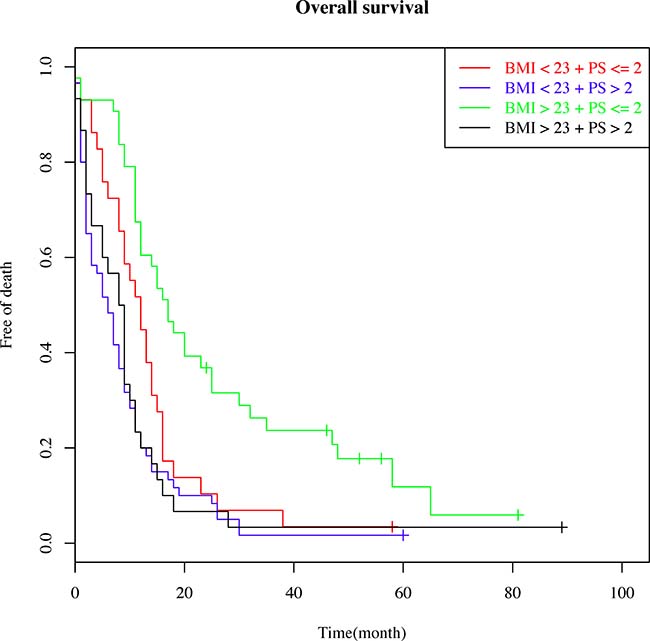 To the best of our knowledge, only Inmate et al. 2016 reported the lactate dehydrogenase (LDH) level and BMI maybe useful prognostic factors in SCLC patient [25]. Our present study provides more evidence to explore the association of overweight BMI with clinicopathological variables and survival outcome in SCLC patients of Asia population.

Lung cancer remains the top cause of cancer-related death worldwide [26]. Compared to NSCLC, SCLC is more aggressive and relapses early, and despite its higher initial sensitivity to chemotherapy, the prognosis remains poor for patients with this disease [27]. Over the past few decades, some potential surrogate markers for SCLC have been studied and reported; however, prognosis has been challenging to predict [28–31], underscoring the urgent need for useful factors that can differentiate the prognosis of various patient populations.

Our study found that SCLC patients who were overweight prior to treatment had better OS than their normal and underweight counterparts (p < 0.001). A deeper multivariate analysis also identified that being overweight was an independent prognostic factor for SCLC patients. Excess weight was associated with an increased risk of mortality in patients with several other cancer types, including breast, colorectal, pancreatic, endometrial, and prostate cancer [32–34]. However, with respect to lung and upper aero-digestive cancer, low BMI may actually increase the risk of mortality [24, 35].

Wang et al. (2017) [4] conducted a meta-analysis to explore the association between BMI and OS in all kinds of lung cancer. When patients were stratified by ethnicity, Asians with elevated BMI had higher OS than Westerners. Compared with normal-weight patients, underweight patients had reduced lung cancer-specific survival as well as lower OS. However, among the 51 cohorts studied, 50 were of NSCLC and only one of SCLC [25].

These data indicate that pending future validation, increased BMI has the potential to be an easily measurable prognostic indicator. A marginal interaction between PS and BMI was also noted (p = 0.068). Patients with PS ≤ 2 and overweight (BMI ≥ 23) had the longest OS (p < 0.05). This result needs to be validated due to the small sample size available for our study.

The mechanisms underlying the relationship between BMI and mortality in patients with lung cancer is still not clearly understood. Patients with respiratory diseases can exhibit weight loss over many years, contributing to their mortality; perhaps alluding to the negative impact of reduced weight on lung cancer patient survival [36]. In addition, weight gain may imply better PS among lung cancer patients [37]. Yet another possibility is that the inverse association between BMI and mortality risk may reflect differences between tobacco smokers and non-smokers. Nicotine activates the melanocortin axis in the brain, suppressing the appetite and reducing food intake [35].

The present study had the following limitations: the single institutional, retrospective design, small population size and population heterogeneity. We are also worried about that selection bias may make it difficult to generalize the results of our analysis and the relative small population failed to detect any significant difference between groups and influential factors.

These clinical trials should investigate the association of pretreatment body weight of SCLC patients with OS, while controlling for important potential confounding factors, such as sex, age, treatment, lifestyle, and disease duration. Also, as a retrospective study, we were not able to assess pretreatment overweight in a prospective cohort to fully assess its role as a prognostic factor in SCLC. Where possible, the effect of weight change over the course of treatment on SCLC patient survival of patients should be evaluated.

In conclusion, being overweight prior to diagnosis is associated with improved survival and in combination of well performance status are superior prognostic factors of patients with SCLC based on our single institute experience. However, the selection biases maybe existed due to retrospective design, further studies are eagerly needed. The pretreatment BMI and PS can be more easily measured than clinical cancer stage, serum biomarker, gene mutation, suggesting that BMI may provide an additional simple and convenient prognostic factor for OS in SCLC patients. Furthermore, this may help inform decision making in the clinic. Finally, the maintenance of adequate body weight is likely to increase a lung cancer patient’s life-span.

A total of 260 patients who had histologically-confirmed SCLC from January 2000 to March 2012, and treated at the Tri-Service General Hospital/National Defense Medical Center (TSGH/NDMC) were evaluated for eligibility. Patients with pretreatment laboratory values and physical measurement information were included, while patients with incomplete follow-up data or body weight data were excluded. Follow-up information was collected from hospitalization records or from family contact. A total of 173 eligible patients were enrolled for the evaluation.

The detailed clinical characteristics including BMI, smoking history, age, gender, PS, disease stage, therapeutic strategies, and survival were obtained for medical records. Serum laboratory data were retrospectively collected based on pretreatment evaluation from the medical records. The time to measure body weight is within 10 days before diagnosis. Besides, if there were any body weight changes in 10 days, we took the average body weight as premorbid data. The cut-off value for the BMI was set at 23, which was adjusted to the Asia-Pacific population according to the World Health Organization Expert consultation [38]. We used the tumor-node-metastasis cancer staging system by the American Joint Committee on Cancer to classify the cancer. The OS was defined as time from the date of diagnosis to the date of death. The PFS was defined as a period from the first day of diagnosis until documented objective tumor progression or death. The date of follow up cut-off was March 25, 2017.

Continuous variables were described using mean ± SD and the categorical variables were analyzed by a Chi-squared test. The optimal cut-off values were determined using time-dependent receiver operating curve (ROC) analysis. Time-dependent ROC analysis was performed using R software, version 3.2.3 and the ‘time ROC’ package [39]. The Kaplan–Meier method and log-rank tests were employed to compare the survival curves. Multivariate analyses were conducted to identify significant independent prognostic factors for the prognosis. Hazard ratio (HR) for each factor was calculated using a Cox-regression proportional hazards model, and median OS was calculated using Kaplan–Meier analysis. Multivariate analysis was performed using factors satisfying p-values less than 0.05 from the univariate analysis. A p-value less than 0.05 was used as the cut-off value for statistical significance. Software “R” version 3.2.3 was used for the statistical analysis.

This study was performed without outside funding.

38. WHO Expert Consultation. Appropriate body-mass index for Asian populations and its implications for policy and intervention strategies. Lancet. 2004; 363:157–163.