Background: We retrospectively analysed the efficacy and safety of sorafenib in patients with advanced renal cell carcinoma with renal impairment.

Conclusion: Throughout the 12-month observation period, sorafenib in patients with an eGFR of <45 and ≥45 showed similar safety and efficacy, and treatment was continued without affecting renal function.

Sorafenib, a vascular endothelial growth factor receptor–tyrosine kinase inhibitor (VEGFR-TKI), was approved as a first-in-class molecular-targeted drug for patients with unresectable and recurrent renal cell carcinoma (RCC) due to the extension of progression-free survival (PFS) in a phase 3 study [1]. VEGFR is highly expressed on vascular endothelial cells and glomerular epithelial cells (podocytes). This receptor regulates the formation of fenestrations and slit diaphragms in vascular endothelial cells and podocytes, respectively, and blockade of VEGFR signal transduction leads to proteinuria [2, 3]. Therefore, although tumour shrinkage is expected in patients with RCC treated with VEGFR-TKIs, there is concern that such treatment may induce a decrease in renal function. Because a limited number of reports have described the relationship between VEGFR-TKIs and renal function in patients with RCC, studies on the safety and efficacy of VEGFR-TKIs for patients with RCC exhibiting low renal function are needed.

The kidney is a multifunctional organ that plays an important role in maintaining bodily homeostasis by excreting body wastes, regulating haematopoiesis, and balancing the electrolytes in the body. Chronic kidney disease (CKD) is generally defined by the estimated glomerular filtration rate (eGFR), an index of renal function, and is considered to be present when the eGFR is <60 mL/min/1.73 m2 for >3 months. CKD increases the risk of end-stage renal disease and death due to cardiovascular disease (CVD) [4]. In particular, studies have shown that when the eGFR decreases to <45 mL/min/1.73 m2, the all-cause mortality, CVD events, and hospitalisation rates rapidly increase [5, 6]. In the present study, we analysed the safety and efficacy of sorafenib in patients with advanced RCC with an eGFR of <45 mL/min/1.73 m2 (CKD stage <G3b) using real-world data by propensity score matching.

Patients’ demographics according to eGFR

Data are expressed as n (%) or mean ± standard deviation.

*Including multiple choices. †Patients with any line of therapy. 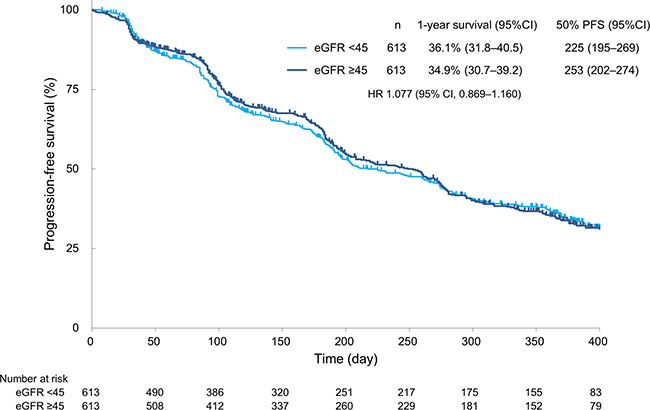 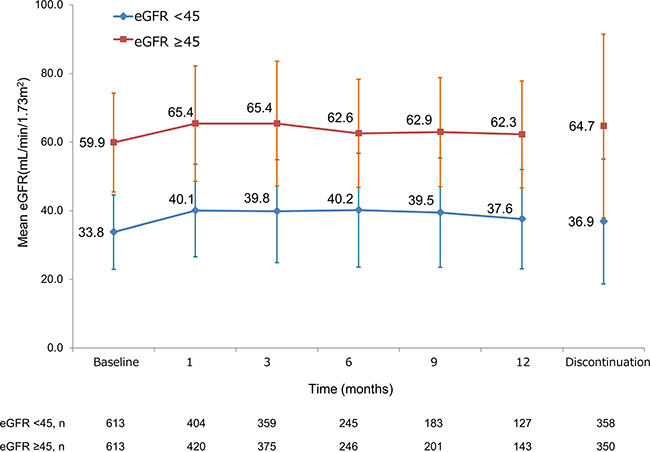 In previous clinical studies of TKI treatment in patients with advanced RCC, an increase in creatinine or proteinuria was sometimes observed; however, such increases do not necessarily reflect clinical practice involving patients with renal impairment. For instance, in the AXIS trial, creatinine increased by 55% and 41% in patients treated with axitinib and sorafenib, respectively [7], and proteinuria was observed in 10.7% and 6.6% [8] of all patients, respectively. However, the inclusion criterion for renal function in the AXIS trial was a creatinine level of ≤1.5 mg/dL or creatinine clearance rate of ≥60 mL/min [8]; this information is not sufficient to evaluate the safety and AEs in patients with renal impairment. In one study in the clinical practice setting, patients who underwent radical nephrectomy showed a continuous decrease in renal function over time [9, 10], and most of these patients had low renal function at the time of TKI initiation. Our propensity score-matched, real-world data showed that 82.8% (2438/2943) patients had undergone nephrectomy and that 31.7% (935/2943) of patients had an eGFR of <45 mL/min/1.73 m2 (Table 1).

Several clinical studies to date have evaluated patients with renal impairment. In one study, 790 patients with metastatic RCC treated with sunitinib were divided into three groups by eGFR (<30, ≥60 to <30, and ≥60 mL/min/1.73 m2) and investigated for safety. However, accurate safety data were not reported. A low number of patients had an eGFR of <30 mL/min/1.73 m2 (n = 22), and there was no significant difference in safety or efficacy among the three groups [11]. In another study, 65 patients with metastatic RCC were treated with axitinib, and the risk factors for a decrease in renal function were found to be age (≥65 years old), baseline renal function (eGFR of <45 mL/min/1.73 m2), and timing of axitinib introduction (≥ third-line) [12]. Furthermore, another study showed that the risk factor for everolimus-induced acute kidney injury was pre-treatment renal dysfunction, and all patients with an eGFR of 15 to 30 mL/min/1.73 m2 (n = 2) developed acute kidney injury after everolimus treatment [13]. Like these clinical studies, the risk of TKI-induced renal impairment in the previous study was based on low pre-treatment renal function; however, the number of investigated patients with low renal function was limited. We divided 3255 patients into 2 groups using an eGFR cut-off of 45 mL/min/1.73 m2, which is reportedly the value at which the mortality and CVD event rates increase, and evaluated the safety of sorafenib in patients with renal impairment after propensity score matching of demographic characteristics.

TKI-induced renal impairment may occur by several mechanisms. The first is glomerular obstruction by inhibition of the VEGF signalling pathway. Urine filtration is mediated through the glomerular filtration barrier, which consists of podocytes, the glomerular basement membrane, and endothelial cells [15]. VEGF-producing podocytes contribute to maintenance of glomerular function via both the podocytes themselves and endothelial cells, and the inhibition of VEGF leads to collapse of the glomerular filtration barrier, resulting in proteinuria [3]. The second mechanism is glomerular deconstruction, termed thrombotic microangiopathy. Direct endothelial dysfunction is induced by VEGF inhibition, mesangiolysis, swelling of endothelial cells and schistocytes, and thrombosis [15]. The third mechanism is based on the inhibition of the production of vasodilator such as nitric oxide and prostaglandin I2 from endothelial cells, leading to hypertension [16]. Each TKI has a possibility of causing renal dysfunction, although there are some differences in their inhibitory specificities to VEGF. In the present study, sorafenib-induced renal dysfunction was observed in 31 (2.5%) patients (27 [4.4%] vs 4 [0.7%] among those with an eGFR of <45 vs ≥45 mL/min/1.73 m2, respectively; P < 0.0001). Generally, renal function tends to decrease at a higher rate in patients with lower baseline renal function [17]. At the end of the present analysis, we determined that sorafenib treatment was safely conducted for at least 12 months without a decrease in renal function in most of the patients with an eGFR of <45 mL/min/1.73 m2 (Figure 2). Moreover, the fact that the eGFR was similar between patients who did and did not discontinue sorafenib treatment (Figure 2) indicates that the treatment discontinuation was unlikely to be associated with the presence of renal impairment.

This study had three main limitations. The first is that it was a non-randomised retrospective study. Although propensity score matching balances patients’ demographics and apparently shows outcomes similar to those of a randomised study, certain biases cannot be denied; for example, patients with missing data regarding the matching factors at baseline were excluded from the analysis. In addition, patients’ demographics were matched using prognostic factors; however, other reported prognostic factors which were not collected at baseline could not be matched. Second, some bias might have been introduced by some physicians who may have been less familiar with the use of sorafenib because these PMS data were collected immediately after approval of sorafenib for treatment of RCC. The third limitation is the duration of the observational period, which was 12 months as required by the Pharmaceutical and Medical Devices Agency; hence, data regarding the safety and efficacy of sorafenib for >12 months could not be obtained.

Study population. As reported in our earlier publications [18, 19], these data were derived from Japanese patients with histologically or cytologically confirmed unresectable or metastatic RCC who started sorafenib treatment from February 2008 to September 2009. Based on a requirement of the Pharmaceutical and Medical Devices Agency, these real-world data were prospectively collected from >3,200 patients and retrospectively analysed.

To investigate the safety and efficacy of sorafenib for patients with RCC with an eGFR of <45 mL/min/1.73 m2, which reportedly increases the death rate and CVD events, the background factors affecting the patients’ prognosis were balanced by propensity score matching. Among 3255 patients, those with the following baseline data were selected for propensity score matching: age; Eastern Cooperative Oncology Group performance status; tumour, node, metastasis (TNM) classification; prior surgery; prior systemic therapy; tumour histology; metastases (liver, brain, and bone); C-reactive protein level; and 1999 Memorial Sloan Kettering Cancer Center (MSKCC) risk. In total, 2,008 patients with an eGFR of ≥45 mL/min/1.73 m2 and 935 patients with an eGFR of <45 mL/min/1.73 m2 were selected and matched with each other, resulting in 613 matching pairs (1226 patients). The patients’ demographics, dose modifications, AEs, tumour response, PFS, and renal function (as measured by eGFR) were evaluated in these two groups.

Student’s t-test and the Mann–Whitney U-test were used to evaluate parametric and non-parametric continuous variables, respectively, and the chi-square test was used for categorical data. PFS was calculated using the Kaplan–Meier method, and statistical significance was analysed by the log-rank test unless otherwise specified. SAS version 9.1 or higher (SAS Institute Inc., Cary, NC, USA) was used for all statistical analyses.

KT planned the data analysis, and MO and HA gave valuable suggestions and guidance to KT. KK drafted the manuscript, which was further revised by KT. All authors read and approved the final manuscript.

We thank the participating patients and staff of the study centres. Data analysis was conducted by EPS Corporation, and editorial assistance in the preparation of this manuscript was provided by ASCA Corporation; the authors retained editorial control over the content.

All authors, except KK, declare no conflicts interest. KK is an employee of Bayer Yakuhin, Ltd.

The financial support of this study and the preparation of the manuscript were provided by Bayer Yakuhin, Ltd.

8. Pfizer Japan Inc. 2015 Guide for appropriate use of axitinib [in Japanese]. Retrieved from https://pfizerpro.jp/documents/info/inl01info.pdf.