Activating KIT D816V mutations are frequently found in CBF AML, which predicts for an unfavorable outcome. Dasatinib is a potent inhibitor of wildtype and mutant-KIT isoforms – including D816V. We now provide proof of antileukemic efficacy in a patient with relapsing mutant-KIT D816V CBF AML. Importantly, this effect is mediated via overriding the differentiation blockage of the leukemia clone.

In addition, we show that dasatinib is capable to induce pulmonary differentiation syndrome – and therefore needs close monitoring of patients under therapy.

Activating KIT D816V mutations are frequently found in core binding factor (CBF) AML [1], predicting for an unfavorable outcome [2]. Furthermore, it has been shown that KIT D816V functions as a second step driver mutation contributing to leukemogenesis in CBF subentities [3].

In analogy to mutant-FLT3 isoforms in AML, mutant-KIT D816 isoforms may provide an attractive therapeutic target in CBF AML. Mutant FLT3 is extensively studied using tyrosine kinase inhibitors (TKI) – and the first TKI, midostaurin, just recently gained FDA approval in this setting. However, there are no approved targeted therapeutics for mutant-KIT CBF AML so far.

We have previously shown that the BCR-ABL1 tyrosine kinase inhibitor dasatinib is a potent inhibitor of wildtype- and mutant-KIT, including the KIT D816V isoform, resulting in potent antiproliferative and proapoptotic efficacy [4]. Dasatinib is currently being tested in combination with a chemotherapy backbone in clinical trials for the treatment of core binding factor leukemias (NCT02013648, NCT00850382, NCT02113319).

We now provide proof of antileukemic efficacy in a patient with relapsed mutant-KIT D816V positive CBF AML – and point to an unexpected mode of action via release of the differentiation blockage and maturation of leukemia blasts.

A 77-year-old unfit male patient with CBFβ-MYH11 positive AML (46,XY,inv(16)(q13q22) [25], KIT p.Asp816Val (exon 17)) relapsed after effective initial treatment with decitabine (hematologic CR after 4 cycles, total of 12 cycles administered) and presented with beginning leukocytosis. Due to the very limited therapeutic options in this frail patient and a high KIT D816V mutation burden at relapse (75,8% KITmut/KITWT and 73% CBFβ-MYH11/ABL1 compared to 3,8% KITmut/KITWT and 4,07% CBFβ-MYH11/ABL1 in a bone marrow aspirate at hematologic CR while under decitabine - indicating outgrowth of the mutant-KIT clone at relapse) an individual attempt with the KIT inhibitor dasatinib (Sprycel®) was initiated.

Therapy was started with dasatinib 70 mg BID after informed consent (Figure 1A). Target-specificity of dasatinib was confirmed in a Western immunoblot using patient’s samples at complete remission while under therapy with decitabine (absence of phospho-KIT in the mononuclear cell fraction), at relapse (strong KIT phosphorylation), and while under treatment with dasatinib 2 × 70 mg/day (potent inhibition of KIT tyrosine phosphorylation, i.e. inactivation of KIT, Figure 1B). 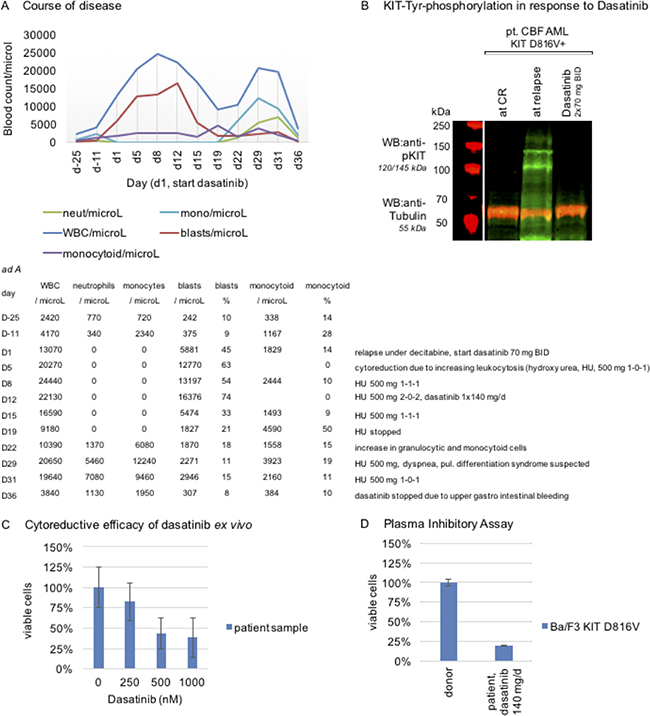 In addition, we tested the cytoreductive capacity of dasatinib in a sample of this patient at relapse after decitabine treatment – and demonstrate ex vivo efficacy of dasatinib. A dose-dilution bar graph is provided with Figure 1C.

Nevertheless, and despite proven target-specificity of dasatinib, we did not observe prompt cytoreduction upon dasatinib, which may reflect high dynamics of the disease with evolving leukocytosis in this patient.

Consequently, on day 5, additional cytoreductive therapy with hydroxyurea (HU) was started (500 mg BID). As leukocytosis progressed, the dose of HU was increased on day 8 (500 mg TID) and day 12 (500 mg 2-0-2) accordingly. Additionally, dosing of dasatinib was changed to 140 mg once a day, in order to achieve higher serum peak levels, as shown previously [5].

The following days, a continuous decline of leukocyte counts was noted – and HU was reduced (500 mg TID day 15) and stopped (day 19). Dosing of dasatinib was not modified.

To cross-check, a plasma inhibitory assay (PIA), as an indirect indicator for clinically active doses of dasatinib achievable in vivo, was set up: Serum of the presented patient was collected while on steady therapy with dasatinib 140 mg/day (day 22) and Ba/F3 KIT D816V cells – a well-established reference cell line harboring the autoactivating KIT D816V mutation [4, 6, 7] – were cultured for 48 hours in the patient’s serum, as well as in serum of a healthy drug-naïve donor as a negative control. Cytoreduction was only observed in the patient’s serum compared to an unchanged viable mononuclear cell fraction in the donor control, arguing for clinically effective concentrations of dasatinib in vivo (Figure 1D).

Intriguingly, starting on day 12, a steady decline of morphologic blasts in the peripheral blood was observed–going along with an emerging dysplastic granulocyte and monocyte population (Figure 2A, 2B, day 28). This observation led us to speculate that dasatinib resulted in release of the differentiation blockage of the leukemic clone in vivo. 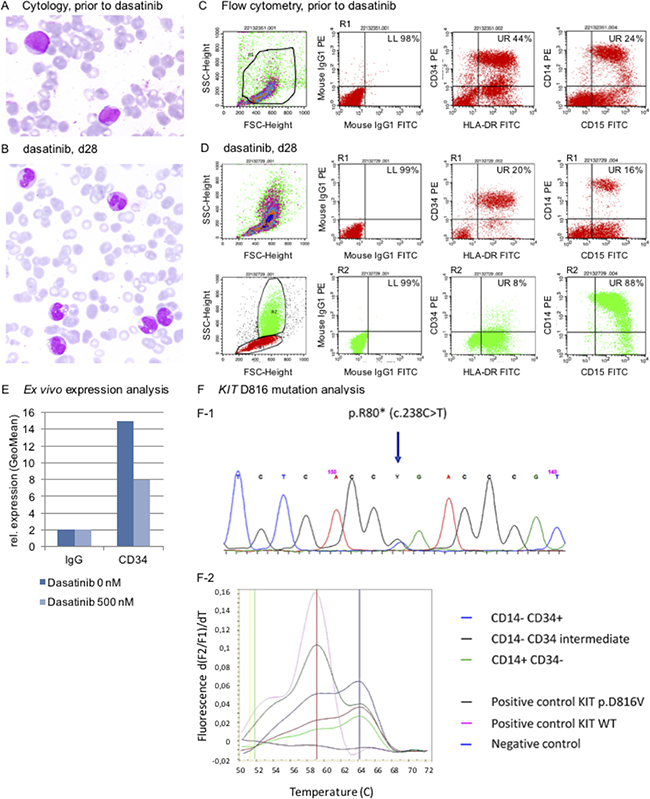 Figure 2: Release of the maturation blockage in leukemia cells in response to dasatinib. (A, B) Cytology (confocal Zeiss® AXIO Imager.A1 microscope): A May-Gruenwald-Giemsa stain shows signs of dysplastic maturation of granulo and monocytoid-like cells (A, untreated patient blood smear prior to start of treatment with dasatinib; B, 28-day on-dasatinib patient sample; zoom-in figures are provided as Supplementary Figure 1A, 1B). (C, D) Immunophenotyping argues for myelomonocytic maturation of the leukemia clone, shifting from a CD34+ positive phenotype (C) to CD34- negativity (D, R1 of upper quadrant plots (in red) refer to R1 in the FSC/SCC region plot (in red). R2 in the lower quadrant plots (in green) refer to R2 in the region plot (in green)), (Assessment on a FACScalibur® flow cytometer using CellQuest® software). (E) Release of differentiation block in response to dasatinib is mimicked in an ex vivo immunophenotyping assay demonstrating decrease of CD34 expression in a patient sample treated with dasatinib ex vivo. (F) A cell sort of the monocytoid CD14–/CD34+ vs. CD14–/CD34(+) vs. CD14+/CD34– populations was performed to screen for the KIT D816V mutation – which was detected in all cohorts (F-1, sanger sequencing; F-2 HPLC melting curve).

We therefore mimicked release of the differentiation blockage ex vivo: Native blasts (sample taken prior to start of dasatinib) were cultured and treated with dasatinib at IC50 concentrations and indeed, relative decrease of CD34 positivity was noted flow cytometrically 72 hours after drug exposure – again arguing for maturation of the patient’s blasts (Figure 2E).

To ultimately verify maturation of the original leukemia clone, a cell sort was set up using a sample of this patient from day 28 on-dasatinib to isolate the CD34+/CD14–, resp. CD34(+)/CD14– and the CD34–/CD14+ cohorts for further molecular characterization: Intriguingly, the leukemia-cell specific KIT D816V mutation was detected in the CD34 positive as well as CD34 negative cohorts, strongly arguing for a release of the differentiation blockage upon exposure of leukemic blasts to dasatinib in vivo (Figure 2F).

Together, these findings strongly argue for in vivo antileukemic efficacy of dasatinib monotherapy in this mutant-KIT, CBFβ-MYH11 positive patient.

The molecular mechanisms remain to be elucidated: Several reports have suggested a crucial role of CCAAT/enhancer-binding-proteins (C/EBP) in hematopoiesis and deregulation is a common occurrence in leukemogenesis (reviewed e.g. by Ramji and Foci [8] and Publican, Tenen and Behre [9]). C/EBP are subject to alternative translation modulating expression of inhibitory and activating isoforms. It has been shown that wildtype and mutant-FLT3 isoforms activate alternative translation of C/EBPbeta via the PI3K/motor/RSK pathways [10]. While speculative, as (mutant-) KIT is known to signal via the PI3K/AKT cascade as well [4], it is likely that inhibition of the gain-of-function KIT D816V isoform (via dasatinib) may alter C/EB-proteins to affect proliferation and differentiation. However, addressing this hypothesis is complex and needs to be answered in future mechanistic studies in detail.

Several problems occurred: Clinical deterioration was noted on day 29, with dyspnea and fever – together with reoccurrence of leukocytosis, suspicious for leukemia relapse and pulmonary infection in neutropenia. However, cytomorphology revealed prevalence of granulocytic and monocytic cells, not blasts. HU was readministered starting on day 29 (500 mg/d, escalated BID on day 31) leading to quick decline in leukocytosis the following days. Empiric antibiotic treatment for suspected pulmonary infection did not result in clinical improvement.

Due to progressing clinical deterioration with fever, hypoxia and edema a chest CT scan was performed demonstrating pulmonary infiltrates and pleural effusion consistent with pulmonary differentiation syndrome (Figure 3A).

Whereas the radiographic findings, also resembling engraftment syndrome after stem cell transplantation due to cytokine release during granulocytic expansion and invasion, do not rule out pulmonary hemorrhage in thrombopenia or dasatinib-associated effusion – treatment with dexamethasone pulse therapy quickly improved the symptoms, strengthening the differential diagnosis of dasatinib-induced differentiation syndrome. This observation is further underlined by histomorphologic findings of the pleural effusion aspirate, revealing predominance of CD14+/CD34– differentiated, partly phagocytic (i.e. functionally active) cells (Figure 3B).

In this context it is noteworthy, that pulmonary differentiation syndrome has been described in CBFβ-MYH11/ABL1 AML – and was reported earlier in two patients with myelomonocytic leukemia (FAB M4eo) with high white blood cell counts at presentation and treated with cytarabine-based induction chemotherapy escalated with all-trans retinoic acid (ATRA) [11].

In our patient, dasatinib was not well tolerated and clinical course was further complicated by upper gastrointestinal bleeding due to thrombopenia (day 36).

Treatment was paused and readministered after recompensation in a reduced dose of 100 mg/day. However, due to persistent inacceptable tolerability of dasatinib in this frail patient (gastrointestinal discomfort associated with drug intake), therapy was permanently stopped in favor of a BSC concept including cytoreduction (HU).

In this context, targeting mutant-KIT feasible but novel inhibitors with improved pharmacodynamics and –kinetics are warranted. It also should be considered that KIT inhibitors may also target wild type KIT, potentially increasing the risk of myelosuppression as discussed earlier by Galanis and Levis [12]. It is notable that we have recently demonstrated that crenolanib, a preferential FLT3 inhibitor compared to KIT inhibition–with less myelosuppressive capacity [13, 14], is a potent mutant-KIT inhibitor-including KIT D816 isoforms [7] providing an attractive agent to be further investigated in mutant-KIT malignancies. Also of importance, proof-of-principle and early clinical data of a novel highly-specific KIT D816V-inhibitor (BLU-285) were just reported in systemic mastocytosis [15, 16] – offering high translatory potential to mutant-KIT acute leukemia.

To summarize, we provide proof-of-principle that KIT inhibition in CBFβ-MYH11, mutant-KIT positive CBF AML has clinical antileukemic efficacy. Interestingly, besides cytoreductive properties, the potentially clinically more challenging mode-of-action may be release of the differentiation blockage of leukemia blasts – which needs special attention to prevent misdiagnosis. Our observations are thereby in line with a previous case report of a patient with RUNX1/RUNX1T1 positive, KIT wildtype AML responding to dasatinib [17].

# 405-2006 BO2, Ethics committee of the Medical Faculty University of Tübingen.

All authors declare consent for publication.

We thank the FACS core facility Tübingen for technical assistance with the cell sort.

Grant support in part by the Brigitte Schlieben-Lange Program of the State Ministry of Baden-Wuerttemberg for Science, Research and Arts (KKS) and Athene Program of the excellence initiative of the Eberhard-Karls University, Tübingen (KKS).