Pemphigus vulgaris (PV) is an autoimmune blistering disease, caused by anti-desmoglein (Dsg) immunoglobulin G (IgG) autoantibodies. Desmogleins are regarded as the principal auto-antigens in pemphigus. The relevant protease, generated by auto-reactive antibodies through cell transduction pathways, results in a loss of epidermal cell–cell adhesion, leading to the occurrence of PV [1, 2].

The pathogenesis and molecular mechanisms underlying PV are sophisticated and not well elucidated. T helper (Th) cells, also known as CD4+ T cells, play important roles in the pathogenesis of PV [3, 4]. Different subsets of Th cells exert different effects and form a complicated network to orchestrate the autoimmune inflammation. Previous studies have revealed that PV is a Th2-dominant disease [5, 6]. Direct evidence of this is that Dsg3-specific Th2 activity positively correlates with the titer of anti-Dsg3 antibody [7]. The transcription factor GATA-3 is regarded as a master regulator of Th2 cell differentiation, during which it upregulates the expression of Th2-type cytokines interleukin-4 (IL-4), IL-5, and IL-13 [8–10]. IL-4, a representative Th2 cytokine, promotes proliferation of T cells, enhances antibody production by B cells, and is involved in the development of Th2-dominant autoimmune disease [10, 11]. IL-13 has a 30% protein homology with IL-4 and shares IL-4Rα as the receptor in common with IL-4; it is thus presumed to have an identical effector function to IL-4 [12, 13]. In addition, regulatory T cells (Tregs), another Th cell subset with a negative regulatory effect, modulate the differentiation of Th cells, especially Th2 cells, and are considered to hinder the development of PV [2, 14]. The imbalance between abnormal activation of Th2 cells and reduced Treg cell activity induces disorder of the immune system and activates B cells to produce specific autoantibodies contributing to pemphigus.

Nr4a2, a transcription factor and a member of the nuclear hormone receptor (Nr4a) family, combines with related response elements to regulate gene transcription. Recent research demonstrates that Nr4a2 participates in the differentiation of CD4+ T cells and plays an important role in autoimmune diseases [15, 16]. Saijo et al. [17] have confirmed that Nr4a2 is a transcription factor with bidirectional regulation effects. Sekiya et al. have found that Nr4a2 combines with the regulatory regions of Foxp3 and strongly induces Foxp3 in naturally occurring Tregs (nTregs) by mediating active histone modification, consequently regulating the differentiation and maturation of Tregs [18, 19]. Furthermore, knocking out Nr4a2 in mice can trigger an abnormal activation of Th2 cells and a Th2-type autoimmune response, leading to the development of systemic multiorgan autoimmune diseases. Together, these findings identify Nr4a2 as a fundamental component in the regulation of T helper cell differentiation and development, namely, a positive regulation of Tregs and a negative regulation of Th2 cells, demonstrating its crucial roles in autoimmune diseases [20].

Therefore, we hypothesized that the Th2 cells are upregulated in PV, owing to the downregulated Nr4a2, which facilitates the activation of the humoral immune machinery and triggers autoimmunity in pemphigus. In this study, we compared Nr4a2 expression in CD4+ T cells from patients with PV and from healthy control subjects. The expression levels of Th2-related cytokines IL-4 and IL-13, as well as the key transcription factor of Th2 cells, GATA3, in CD4+ T cells were compared between subjects with PV and healthy control subjects. The correlation between Nr4a2 expression and cytokine levels of IL-4 and IL-13 was also analyzed. Further, we transfected CD4+ T cells in vitro with Nr4a2-overexpressing plasmid and Nr4a2-siRNA, respectively, and thus examined the regulatory mechanisms of Nr4a2 on Th2 cells in the settings of PV.

Expression of GATA3, IL-4, and IL-13 is increased in CD4+ T cells from patients with PV 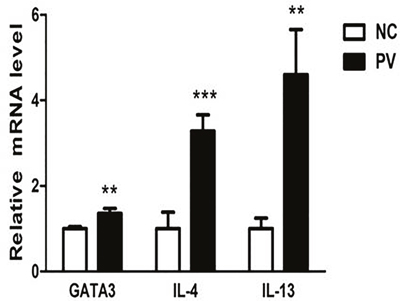 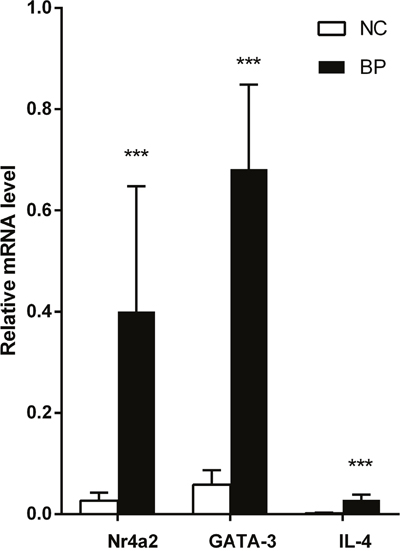 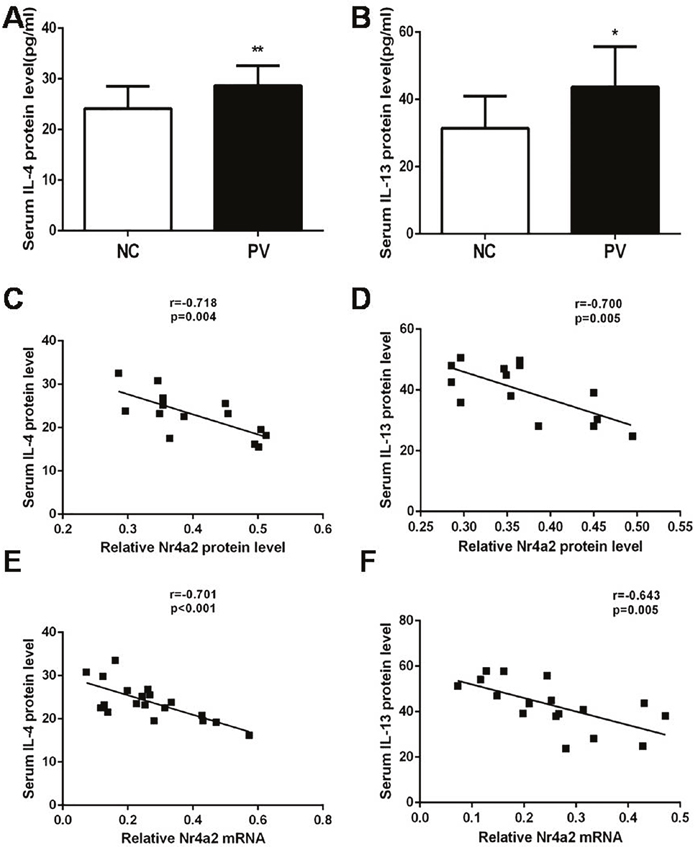 Expression of Nr4a2, GATA3 and IL-4 is increased in CD4+ T cells from patients with BP 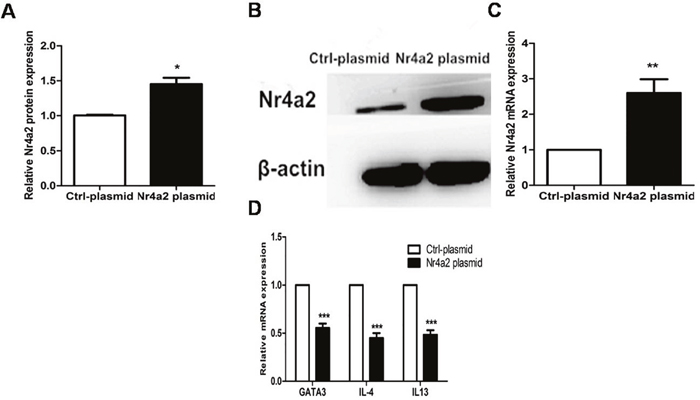 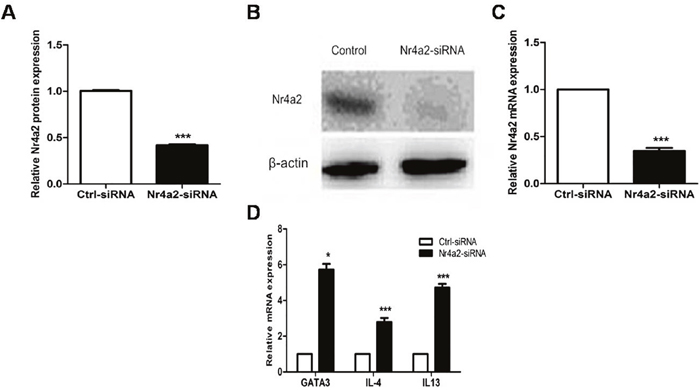 The autoimmune response mediated by Th cells, especially the abnormal increase of Th2 cells and the decrease of Treg cells, plays pivotal roles in the pathogenesis of PV. It has been previously demonstrated that Nr4a2 positively regulates Tregs in autoimmune responses. Consistently, our experiments demonstrated that the expression level of Nr4a2 in CD4+ T cells from patients with PV were significantly lower than in those from healthy control subjects, suggesting a potentially important role of Nr4a2 in the pathogenesis of PV. However, how Nr4a2 participates in the pathogenesis of PV; especially, whether it is also involved in the regulation of Th2 immune response in PV, remains to be elucidated. Our data provide positive answers to these questions.

Our results showed increased expression of the Th2-type cytokines IL-4 and IL-13 in CD4+ T cells and elevated serum levels of these two cytokines in patients with PV. This was consistent with previous studies, highlighting the significance of the activation of Th2 response in the pathogenesis of PV. For instance, Caproni et al. [21] characterized the immunophenotype of the cellular infiltrate of pemphigus lesional skin and studied the secreted cytokines, including IL-4, IL-13, and IFN-γ. Caproni et al. [21] identified the presence of a T cell population with a prevalent Th2-like cytokine pattern in pemphigus lesional skin. Veldman et al. [2] demonstrated that the level of IL-4 was increased in the sera of patients with PV. Rizzo et al. evaluated IL-4-producing CD4+ T cells using peripheral blood mononuclear cells from patients with active or remittent PV and healthy control subjects, and found that the mean frequency of Th2 cells was significantly elevated in patients with PV with active disease [7]. Takahashi et al. [22] stimulated Dsg3−/− mice with soluble recombinant CD40L and immunized them with recombinant Dsg3 (rDsg3) to obtain culture supernatants of splenic B cells, in the presence of exogenous IL-4, IL-10, or IFN-γ. The IgG anti-Dsg3 antibodies were only detected in the aforementioned supernatants with exogenous IL-4, but not in those with IL-10 or IFN-γ. Next, Takahashi et al. [22] administered soluble cytokine receptor IL-4R to Rag-2−/− mice, which can neutralize IL-4 in vivo. Five days later, Takahashi et al. [22] adoptively transferred the pathogenic Dsg3-reactive T cell clone 147#48 and primed Dsg3−/− B cells into the immuno-deficient mice. The IL-4R significantly suppressed the production of IgG anti-Dsg3 antibodies [23], indicating the critical role of IL-4 in promoting B cells to produce specific anti-Dsg3 antibodies and in inducing the occurrence of PV. Interestingly, bullous pemphigoid, another type of autoimmune blistering disease similar to, but distinct from, PV, is also featured by a Th2-predominant autoimmunity, showing significantly increased serum IL-4 and IL-13 as compared with healthy individuals [24].

Moreover, our data identified an increased expression of GATA3, a major regulator of Th2 cells, in CD4+ T cells from patients with PV. GATA3 can promote the conversion of Th0 cells to Th2 cells, and restrict the process of Th0 cells to Th1 cells [25, 26]. Because of the predominant expression in Th2 cells and its prominent function, GATA3 is an effective index to measure the functional status of Th2 cells. Therefore, abnormally high GATA3 expression is responsible for Th2-biased autoimmunity in PV [27]. However, the mRNA levels of Nr4a2, GATA3, and IL-4 are elevated in CD4+ T cells from patients with BP, compared with those from healthy control subjects. This result also shows that Nr4a2 is only specifically expressed in PV patients.

As shown by our results, the expression of Nr4a2 is inversely correlated with the serum levels of IL-4 and IL-13. This highlights the potential of Nr4a2 as a critical molecule that regulates Th2-type response in PV, which has been further investigated and confirmed by our studies using Nr4a2-overexpressing plasmid and Nr4a2 inhibitors. The significant influence of artificially modulated expression of Nr4a2 on Th2-related cytokines suggests that Nr4a2 can negatively regulate GATA3 and thus modulate the Th2-type cytokines IL-4 and IL-13. Reversing the reduced expression of Nr4a2 in patients with PV can restrain the activity of Th2-type immunity.

In summary, our findings indicate that aberrantly decreased expression of Nr4a2 may lead to an exacerbation of pathogenic Th2-type immunity and contribute to the pathogenesis of PV. The exact molecular mechanisms of this negative regulation of Th2-type immunity by Nr4a2 warrant further investigation. A possible hypothesis is that Nr4a2 may directly bind to the promoter region of GATA3, or to that of IL-4 or IL-13, and thus modulate its expression. Further study into these mechanisms may shed new light on our understanding of the pathogenesis of PV and would provide novel molecular targets for diagnosis and treatment of this disease.

Total RNA from CD4+ T cells was isolated using Rneasy mini kits (Qiagen, Venlo, the Netherlands), and mRNA levels were quantified by real-time PCR in a thermal cycler (LightCycle96, Roche, Switzerland), using a commercial kit (Quanti Tect SYBR Green Real-time PCR kit, Qiagen) and the primers listed in Table 2. In addition, β-actin was amplified as a loading control (Table 2). A dilution series of sample RNA was included to generate a standard curve, which was used to calculate relative concentrations of transcript in each RNA sample.

Serum was isolated from the venous peripheral blood from each patient with PV and each healthy control subject and stored at −20 °C. IL-4 and IL-13 protein concentrations in the serum samples were measured using an ELISA kit (R&D, USA). Optical density values were determined at 450 nm using an EL×800 absorbance microplate reader (BioTek, USA).

Student’s t test for equality of means was used to compare values. Significance was assumed for p < 0.05. All analyses were performed with SPSS software (version 17.0, Chicago, IL, USA).

There are no financial or commercial conflicts of interest.