Association of IL4, IL6, and IL10 polymorphisms with pulmonary tuberculosis in a Tibetan Chinese population

Background: Pulmonary tuberculosis (PTB) is an infectious disease with a high incidence worldwide. Genes encoding cytokines IL4, IL6, and IL10 are highly polymorphic and can influence the susceptibility to PTB.

Materials and Methods: For this study, we recruited 467 subjects with PTB and 503 healthy subjects from a Tibetan population living in Lhasa and nearby, China. Association analyses of sixteen single-nucleotide polymorphisms (SNPs) in IL4, IL6, and IL10 were performed.

Conclusions: Our findings demonstrate an association between polymorphisms in IL6 and IL10 and risk of PTB.

Pulmonary tuberculosis (PTB) is caused by Mycobacterium tuberculosis (M. tuberculosis) and is one of the leading causes of death worldwide. Since 1980, the incidences of PTB and mortality rates have increased rapidly [1]. Tuberculosis in 2009 global statistics show that about 9.4 million people are infected with tuberculosis, 1.7 million people died of tuberculosis [2]. The incidence of PTB in Asian countries accounts for 60% of the total infections worldwide. The number of PTB patients in China is the second largest in the world, and China is considered as one of the 22 high-burden countries. Tibet is one of the regions with high TB burden. The statistical analysis of the tuberculosis epidemic situation in the Tibet Autonomous Region in 2011–2013 showed that the number of cases and incidence of tuberculosis in Tibet Autonomous Region was 4046 and 134.9/100,000, 4096 and 136.5/100,000, 4273 and 142.4/100,000, respectively. Although M. tuberculosis has infected almost one-third of the population worldwide, only 10% of patients produce corresponding clinical symptoms during their lifetime [3], implicating that additional factors may influence the incidence of disease among different individuals.

Previous studies have identified genes that confer disease susceptibility by regulating the immune response [4, 5]. A twin study found that PTB concordance in identical twins is 2-fold higher than in non-identical twins [6]. Thus, we expect that identification of host genetic factors for PTB susceptibility may play a key role in PTB control worldwide. The first published tuberculosis GWAS identified chr18q11 rs4331426 as the susceptible loci for tuberculosis [7]. After that, in Garner, Gambia, Indonesia, and Russia, rs2057178, located on the chr11q3 downstream of the WT1 gene, was identified as a resistance gene loci [8]. In a recent GWAS study published in the Russian population, the ASAP1 gene intron SNP (rs4733781, rs10956514) located on the 8q24 chromosome was associated with tuberculosis [9]. In the Chinese population validation study found that the results differ from those of other ethnic groups. In recent years, more and more research has been done on the susceptibility to tuberculosis in the world. Linkage analysis and candidate gene association studies identified a number of possible susceptibility genes for tuberculosis, which can be divided into human leukocyte associated antigen genes and non HLA genes. Non HLA genes include VDR, MBL, TLR, P2X, IL4, IL6, IL 10, and so on [10–14].

IL-6 is secreted by Toll-like receptor 2-expressing cells in response to the presence of Mycobacterium tuberculosis early in infection and is involved in anti-tuberculosis immunity in the body [17]. High levels of IL-6 cytokine are produced in response to MTB infection [18], and its role seems especially critical when bacterial burden is high [19]. Rong H et al. [20] shown that rs1524107 CT genotype significantly increased the risk of TB, but the association disappeared after stratified by age and gender.

Interleukin 10 (IL10) is a multifunctional cytokine mainly produced by Th2 cells, the main function of antigen presentation function for stromal macrophages, through down-regulation of inflammatory cytokines, thereby inhibiting macrophage function during inflammation, inhibit Th1 cell response, inhibition of Th1 cells to produce cytokines IFN-γ, is a kind of cytokines the incidence of tuberculosis, play a role in the pathogenesis of tuberculosis. The study found that IL10 gene associated with the risk of tuberculosis [21]. Studies in Asian population reported the minor allele “G” of rs1800172 in IL10 was associated with a decreased PTB risk (OR = 0.69) whereas no risk association was found in Europeans (OR = 1.19), Africans (OR = 1.01) [22]. The study of Halstrom S implicated the minor (A) allele of rs1518111 in risk of pulmonary NTM disease in Caucasians [23].

Through the literature search, we found that interleukin gene is related to the occurrence of tuberculosis, few studies have explored the association between IL4, IL6, and IL10 polymorphisms and PTB risk in Chinese populations. So we selected IL4, IL6, IL10 genes as the study. We combined our previous literature, selected seven IL4 SNPs, two IL6 SNPs, and seven IL10 SNPs to evaluate whether single-nucleotide polymorphisms (SNPs) in the three genes were associated with PTB risk in a Tibetan Chinese population.

#SNP was excluded in the subsequent analysis for deviated from Hardy–Weinberg Equilibrium (p < 0.05). 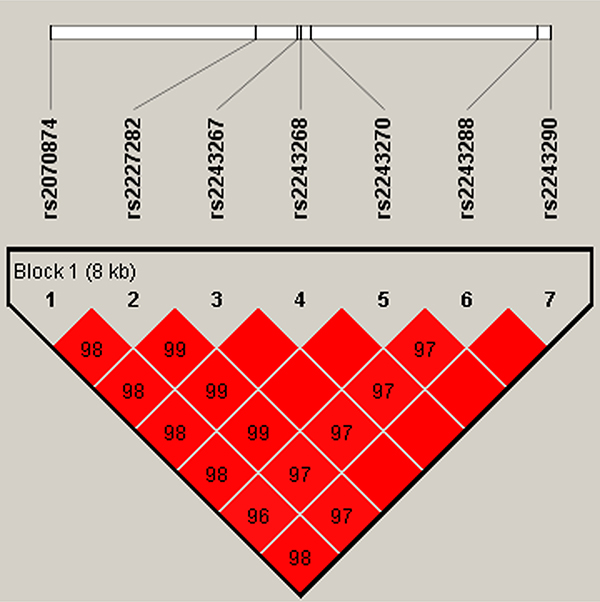 Figure 1: Haplotype block for the SNPs of IL4. A standard color scheme is used to display LD with bright red for very strong LD (LOD = 2, D’ = 1). 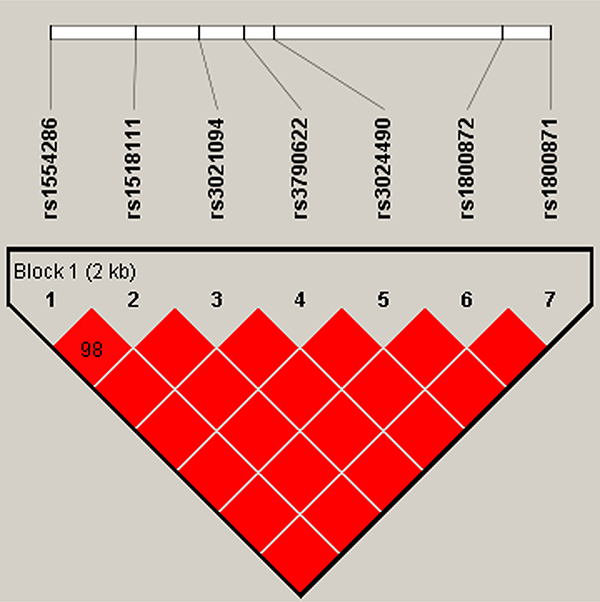 Figure 2: Haplotype block for the SNPs of IL10. A standard color scheme is used to display LD with bright red for very strong LD (LOD = 2, D’ = 1).

Previous PTB studies investigated the function of host genetic factors and immune response in M. tuberculosis (MTB) infection [24]. In humans, macrophages are the main cells involved in intracellular replication of MTB. Macrophages also serve as antigen-presenting cells during the reactivation of lymphocytes, and they function as a vital killer of mycobacteria [25]. Cytokines such as IL6 and IL10 play a key role in driving the appropriate immune response against mycobacteria via activation of inflammatory and immunomodulatory networks orchestrated by both macrophages and T cells [26]. The importance of cytokine IL6 has been studied in previous studies demonstrating that IL6 is important for optimal T-cell development [27, 28]. High levels of IL6 are produced in response to MTB infection and IL6 is critical when bacterial burden is high [19, 29, 30]. A study done in a Southern Brazilian population found that the minor allele “C” of rs1800795 in IL6 decreased the risk of PTB development (OR = 0.49, 95% CI: 0.31–0.78, p = 0.008) [12].

IL6 and IL10 are both cytokines that function in the inflammation process. To our knowledge, our study is the first to investigate the association between polymorphic SNPs of three IL genes and PTB risk in a Tibetan Chinese population. Our findings demonstrate an association between polymorphisms in IL6 and IL10 and risk of PTB. We speculate that IL6 and IL10 polymorphisms might modify gene expression and biological function. Polymorphisms of IL6 and IL10 that influence the ability of macrophages to kill M. tuberculosis in PTB patients may be a risk factor for PTB. And in the further, we will conduct further validation and disease prediction studies.

Our present study strictly followed the principles of the Declaration of Helsinki of the World Medical Association and was approved by the Ethics Committee of School of Medicine, Xizang Minzu University. Informed consent forms were signed by all participants.

A total of 467 Tibetan PTB patients were recruited from the third Hospital of Tibet Autonomous Region from October 2012 to September 2013. Patients were diagnosed based on the criteria of sputum smear or culture positive for MTB pathogen, clinical-radiological findings, and histological evidence of PTB. We excluded individuals who were infected with nontuberculous Mycobacterium, treated with immunosuppressants, or exhibited only extrapulmonary tuberculosis without PTB. At the same time, stochastic samples of 503 healthy controls were enlisted from the same geographical origin and were living in the same region as the patients with PTB. The controls had no previous clinical history or laboratory criteria suggestive of PTB infection. All subjects were all Tibetan Chinese living in Lhasa and nearby.

Cases and controls had at least three generations of paternal ancestry in their ethnic. Cases and controls with any of the following conditions were excluded from the study: human immunodeficiency virus (HIV) positive or known to have any autoimmune, chronic inflammatory, or other diseases.

Microsoft Excel (Microsoft, Redmond, WA) and SPSS Statistics (version 17.0, SPSS, Chicago, IL) were used for statistical analyses. All p-values were two-tailed, and p < 0.05 was considered to be statistically significant. SNP genotype frequencies in the case and control groups were calculated by Chi-square tests and the Hardy-Weinberg equilibrium (HWE) was used to check the genotype frequency of the control group. Unconditional logistic regression analysis was used to examine the odds ratios (ORs) and 95% confidence intervals (CIs) in order to assess the association between SNPs and PTB [35]. Three models (dominant, recessive, log-additive) were used to test the association between SNPs and PTB [36]. Furthermore, Haploview (version 4.2, Broad Institute, Cambridge, MA) and SHEsis software (http://www.nhgg.org/analysis/) were used to check the linkage disequilibrium (LD), haplotype construction, and genetic association at polymorphism loci. A D’ value greater than 0.8 indicated that the related SNPs formed one block [37].

This study was supported by the Major Cultivation Project of Xizang Minzu University (No. 12myZP04), the Natural Science Foundation of Xizang (Tibet) Autonomous Region (No.12KJZRYMY10) and the Major Science and Technology Research Projects of Xizang (Tibet) Autonomous Region (2015XZ01G17). We are grateful for all the participants in our study, as this study would not have been a success without them. We also like to thank the clinicians and hospital staff from the third Hospital of Tibet Autonomous Region, who contributed to the samples collection for this study.

28. Leal IS, Smedegard B, Andersen P, Appelberg R. Interleukin-6 and interleukin-12 participate in induction of a type 1 protective T-cell response during vaccination with a tuberculosis subunit vaccine. Infect Immun. 1999; 67:5747–54.