Background and study aims: Carbohydrate antigen 19-9 (CA199) has been identified as a tumor marker for pancreatic cancer but also increases in benign lesions of the digestive system. However, literature associated with the relationship between CA199 and acute pancreatitis (AP) is limited. This study aimed to focus on serum CA199 level measurements in AP patients and the associated clinical significance.

Materials and methods: From January 2006 to December 2015, 1,609 consecutive patients with AP were admitted to our department and included in the study. The relationships among the etiology of AP, the disease severity, the incidence of pancreatic cancer during hospitalization and CA199 levels were analyzed.

Results: Serum CA199 levels were measured for 693 of 1,609 AP patients. Of those patients, 186 (26.8%) had elevated CA199 levels (> 37 U/ml). Patients with high CA199 levels were older and had predominantly biliary causes in comparison with patients with normal CA199 levels. There were no definite specific correlations between CA199 levels and disease severity in AP. In addition, serum levels of CA199 positively correlated with serum alanine aminotransferase, aspartate transaminase, glutamyl transpeptidase, alkaline phosphatase and creatinine levels. After stratification, the incidence of pancreatic cancer increased proportionally to CA199 levels in AP patients.

Acute pancreatitis (AP) is characterized by pancreatic tissue self-digestion, edema, hemorrhage and even necrosis caused by the inflammatory responses next to trypsin activation. The signs and symptoms of AP include pain in the upper abdomen, nausea, vomiting, fever and increased serum amylase levels. The revised Atlanta classification categorizes AP into mild, moderate, and severe categories based upon different disease severities [1].

AP has multiple etiologies [2, 3], and the most common causes include gallstones, heavy alcohol consumption and hypertriglyceridemia. Other minor causes include pancreatic duct obstruction, surgery and trauma, endocrine and metabolic disorders, infections, drugs, genetic factors and so on. In addition, 5–25% of AP cases are idiopathic with an unknown etiology [4, 5]. It was recently reported that AP may be an early manifestation of pancreatic cancer [6–8]. Hence, many pancreatic cancer patients may be misdiagnosed as AP, even delaying their diagnosis and treatment [9, 10].

Carbohydrate antigen 19-9 (CA199) is a glycoprotein macromolecule that is first discovered by Koprowski in 1979 [11] and has been used as a tumor marker for pancreatic cancer (PC) since 1983 [12, 13]. CA199 is still considered to be the most sensitive serum marker for pancreatic cancer [14]. Recently, some research reported that CA199 could also be elevated in other digestive system tumors and in patients with benign hepatobiliary [15–17] and gastrointestinal disease [18, 19]. However, the relationship between CA199 levels in AP patients and the presence of pancreatic cancer remains less observed and has not been investigated thoroughly.

In this study, patients with a definite diagnosis of AP admitted to our hospital over a period of 10 years were retrospectively collected. We aimed to analyze the comparisons in CA199 levels in different AP groups, and to determine whether elevated CA199 levels in AP patients was associated with the risk factors for pancreatic cancer. 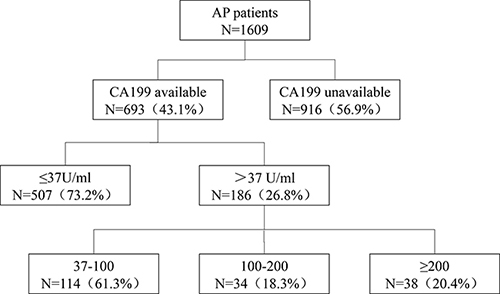 Figure 1: The distribution of CA199 in patients with greater than 37 U / ml levels.

Table 1: Comparison of clinical characteristics and outcomes between AP patients with vs. without high serum CA199 levels

Table 2: Comparison of clinical characteristics and outcomes between different CA199 categories in patients with AP

Figure 3: Correlation between CA199 and other clinical indicators in AP patients.

CA199 levels and the presence of pancreatic cancer 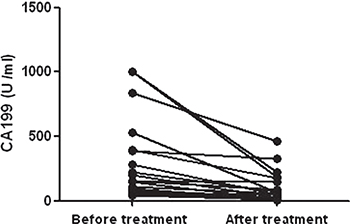 To validate for the absence of the selection bias in the AP patients included in this study, comparisons were performed between patients with available serum CA199 levels (N = 693) and patients with serum CA199 levels unavailable (N = 921). Demographics and clinical characteristics showed no significant differences between these two groups, except for age and personal history, as shown in Table 3. Patients with available CA199 levels were older (57.0 vs. 53.2 years, P < 0.001). No significant differences in disease severity and underlying diseases were identified between the two groups.

Table 3: Comparison of baseline clinical characteristics for patients with vs. without serum CA199 levels

CA199 is a polymer glycoprotein with a sialylated type I lactose fucoidan structure that consists of six glycosyl groups (sialylated Lewis A antigen) [22, 23]. Trace CA199 levels are present in healthy adult salivary glands and in prostate, pancreas, breast, stomach, bile duct, gallbladder, and bronchial epithelial cells [24]. Recent studies have shown that serum CA199 levels could be elevated in gastrointestinal tumors and in benign hepatobiliary and gastrointestinal disease, but there lacked research on CA199 expression in patients with AP. To our knowledge, our study is by far the largest clinical study demonstrating the significance of CA199 expression in patients with AP. Our study totally included 1,609 AP patients, of which 693 patients had serum CA199 levels measured during hospitalization and 186 patients had elevated CA199 levels (> 37 U/ml), with a positive rate of 26.8%.

Previous studies have shown that 46% of patients with choledocholithiasis had increased serum CA199 levels [25], and this rate was even higher when acute cholangitis was included. The reason for this phenomenon may lie in that inflammation stimulates the bile duct epithelial cells to over-secrete CA199 and increases the permeability of the bile duct wall. Furthermore, bile excretion obstruction induces the bile reflux, and then CA199 is secreted into the circulation.

In this clinical research, our data showed that the most common cause of AP was biliary, which was consistent with previous studies in China [26–28]. Additionally, the incidence of high serum CA199 levels was higher in patients with biliary pancreatitis than in patients with hypertriglyceridemic and alcoholic AP. Moreover, we found that serum CA199 levels correlated positively with ALT, AST, GGT and ALP levels, which may be associated with the phenomenon of the serum CA199 levels was higher in biliary pancreatitis patients. In addition, our study also found that CA199 levels were positively associated with the serum creatinine levels; this result may mainly cause by acute kidney injury and was consistent with previous reports [29, 30]. However, despite these above clinical findings, we failed to observe strong correlation between CA199 levels and disease severity (Atlanta disease grade, Ranson score and CTSI), which suggested that CA199 levels could not be used as an indicator of AP severity.

This study has several limitations. First, it is a single-center retrospective study. Second, the diagnosis of pancreatic tumor mass was based on clinical symptoms and imaging diagnosis and some patients lacked histopathological reports. Third, dynamic monitoring of CA199 changes was performed for limited patients. Prospective, multi-center studies are needed to validate the obtained findings and to further explore the clinical significance of CA199 as an early indicator of pancreatic cancer in AP patients in future.

AP patients admitted to the Affiliated Hospital of Yangzhou University from January 2006 to December 2015 were included in this study. According to the 2012 revised Atlanta classification [1], diagnosis of AP requires at least 2 of the following criteria: acute abdominal pain, elevated serum amylase (more than three times the upper limit of the normal range), and an imaging study with characteristic changes (CT, MRI, abdominal ultrasound or endoscopic ultrasound). For patients who were re-hospitalized for several times during the study period, only the first admission was included. The exclusion criteria for the study were as follows: a. patients under 18 years old, b. pregnant women, c. endoscopic retrograde cholangiopancreatography (ERCP) induced pancreatitis, and d. AP caused by direct trauma.

Due to the retrospective characteristics of the study from 2006 to 2015, informed consent was waived and the study was approved by the Ethics Committees of our hospital.

Severity of acute pancreatitis, assessment of complications and diagnosis of pancreatic cancer

CA199 levels were determined by using the Backman Dxi800 automatic chemiluminescence method. Venous blood samples of the fasting patients were collected in the morning, and the serum was separated within 2 hours. CA199 level > 37 U/mL was regarded as elevated while CA199 level < 37 U/mL was regarded as normal. In our hospital, the maximum range of CA199 detection was 1000 U/ml, therefore, the results were recorded as 1000 U/ml if it exceeds the range.

As to the baseline characteristics, AP etiology, disease severity, personal history, and clinical outcomes were compared according to different CA199 levels. We then compared baseline characteristics and clinical outcomes between different CA199 levels categories (0–37, 37–100, 100–200, greater than 200). Statistical analysis was performed by using the version 16.0 SPSS software (IBM Analytics, Armonk, NY). Data are presented as mean ± standard deviation (SD) for continuous variables and absolute numbers and percentages for categorical variables. Student t test or Mann–Whitney test was used for analyzing continuous variables and the Chi-square test was used for analyzing categorical variables. Correlation analyses were performed by using Pearson’s simple correlation test. Patient characteristics were compared between patients with available serum CA199 levels and patients without to investigate for the selection bias in our study. A probability (p value) of < 0.05 was considered statistically significant.