2Institute of Clinical Medicine, Department of Endocrinology, The Central Hospital of Loudi Affiliated to the University of South China, Loudi 417000, China

3Department of Cardiology, The Central Hospital of Loudi Affiliated to the University of South China, Loudi 417000, China

We conducted a systematic review and meta-analysis to evaluate the effects of remote ischemic conditioning on myocardial parameters and clinical outcomes in ST segment elevation acute myocardial infarction (STEMI) patients undergoing primary percutaneous coronary intervention. Ten eligible randomized controlled trials with 1006 STEMI patients were identified. Compared with controls, remote ischemic conditioning reduced the myocardial enzyme levels (standardized mean difference =-0.86; 95% CI: -1.44 to -0.28; P = 0.004; I2 = 94.5%), and increased the incidence of complete ST-segment resolution [odds ratio (OR) = 1.74; 95% CI: 1.09 to 2.77; P = 0.02; I2 = 47.9%]. Remote ischemic conditioning patients had a lower risk of all-cause mortality (OR = 0.27; 95% CI: 0.12 to 0.62; P = 0.002; I2 = 0.0%) and lower major adverse cardiovascular and cerebrovascular events rate (OR=0.45; 95% CI: 0.27 to 0.75; P = 0.002; I2 = 0.0%). Meta-analysis suggested that remote ischemic conditioning conferred cardioprotection by reducing myocardial enzymes and increasing the incidence of complete ST-segment resolution in patients after STEMI. As a result, clinical outcomes were improved in terms of mortality and incidence of major adverse cardiovascular and cerebrovascular events.

Timely reperfusion to ischemic myocardium after ST segment elevation acute myocardial infarction (STEMI) can result in obvious myocardial ischemia/reperfusion (I/R) injury, which may impair the clinical benefit of primary percutaneous coronary intervention (PPCI) [1]. Considerable effort has been directed at this clinical issue with mixed results, and novel strategies need to be identified.

Remote ischemic conditioning (RIC) was first introduced by Przyklenk et al. in 1993 [2]. By applying several cycles of transient ischemic stimulus in a remote organ (mostly a limb), RIC is known to protect the heart, kidney, and brain from reperfusion injury in various animal models[3]. In humans, RIC was also shown to prevent reperfusion-induced endothelial dysfunction [4, 5], and offers novel, endogenous, noninvasive, and systemic protective potential [6]. In 2010, Bøtker et al. [7] first reported decreased post-PPCI troponin levels and increased myocardial salvage index(MSI) in RIC-treated patients with STEMI, and the use of RIC has been explored in STEMI by other research groups[8, 9]. Recently, several randomized control trials (RCTs) with controversial results have been published [10–12]. We conducted a comprehensive meta-analysis to evaluate the clinical effect of RIC in STEMI patients undergoing PPCI. 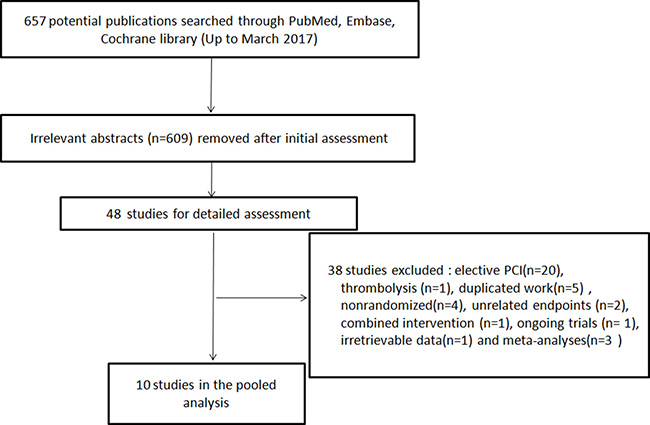 Postprocedural elevated myocardial enzyme level was reduced by RIC relative to control group [standardized mean differences (SMD) =-0.86; 95% CI: –1.44 to –0.28; P = 0.004] with significant heterogeneity (I2 = 94.5%) (Figure 2A). No evidence of publication bias was observed (P = 0.03, Begg’s test; P = 0.75, Egger’s test). Sensitivity analysis excluding each included study one at a time revealed that most individual studies were consistent with the direction and size of the overall myocardial enzymatic effect (All P ≤ 0.02) (Figure 4A). 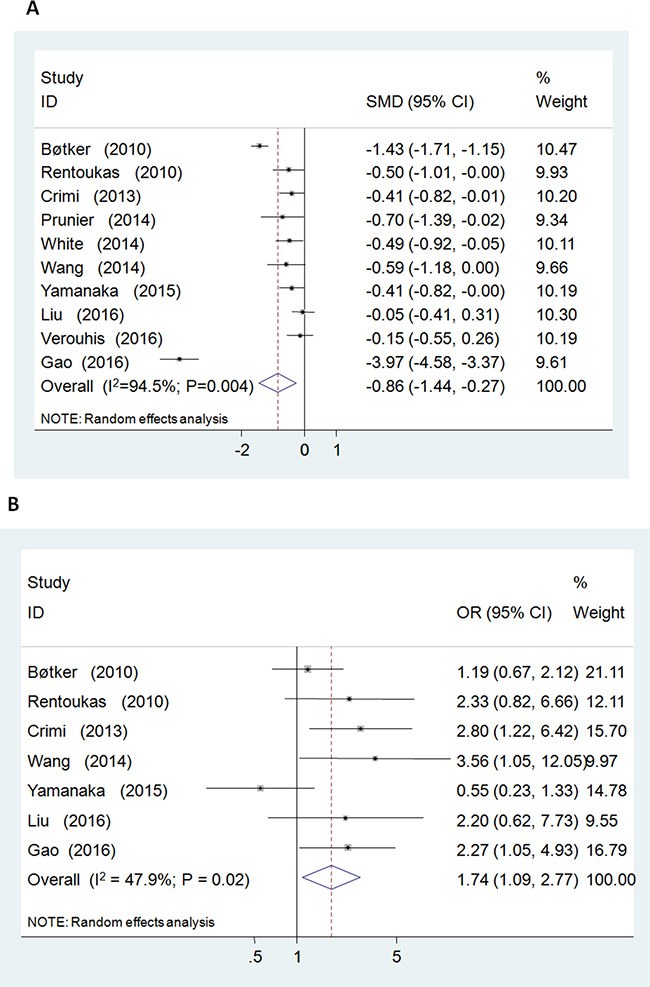 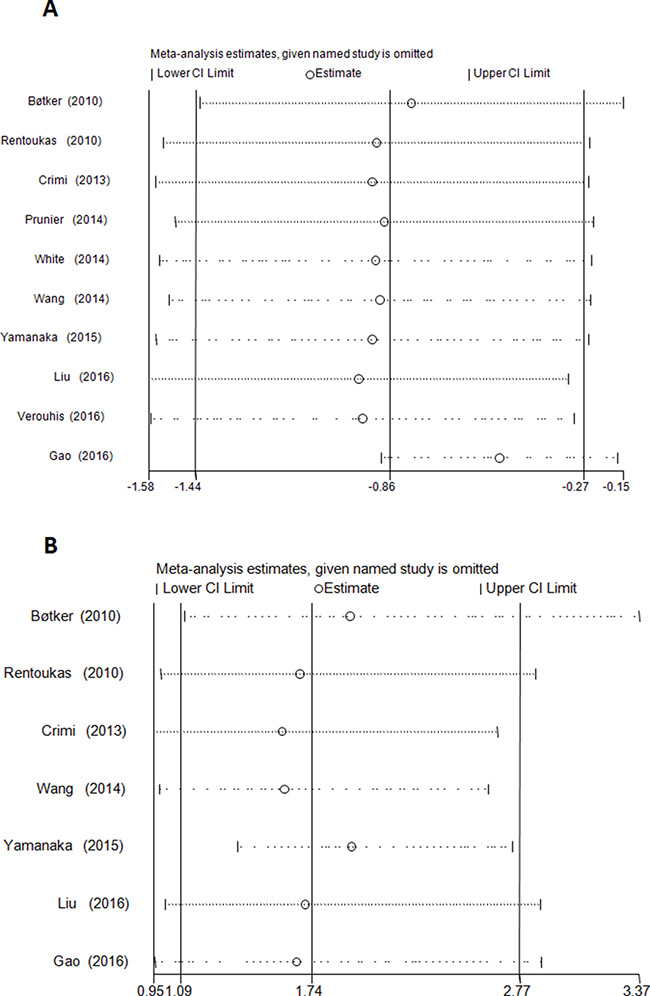 Figure 4: Sensitivity analysis evaluating the influence of each individual study (left side) on the postprocedural myocardial enzyme levels (All P ≤ 0.02); (A) and complete ST-segmental resolution (All P ≤ 0.08); (B). The remaining all results with 95% confidence interval (CI) is presented.

Effect of RIC on clinical outcomes 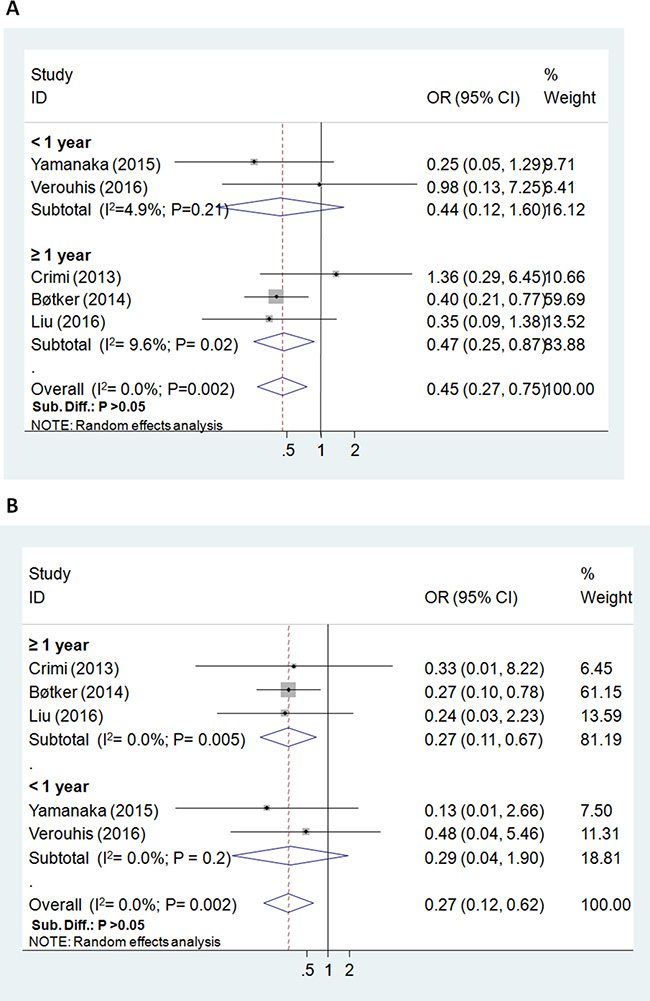 In this meta-analysis of ten randomized trials involving 1006 patients, we confirmed that RIC conferred cardioprotection compared to primary PCI alone by reducing elevated myocardial enzyme and increasing the incidence of cSTR in patients after STEMI. No beneficial effect on MSI, myocardial edema, imaging IS, or LVEF was observed. Our study demonstrated that RIC also improved clinical outcomes regarding all-cause mortality and incidence of MACCE.

PCI remains one of the two current cornerstones in the treatment of STEMI patients. However, the incidence of heart failure (≈ 25%) and cardiac death (≈ 10%) after PPCI remains high, partly due to myocardial ischemia/reperfusion (I/R) injury [17]. Paradoxical injury during reperfusion may cause irreversible cardiomyocyte damage and myocardial stunning, resulting in elevated cardiac enzymes, delayed cSTR, and limited myocardial salvage potential [18, 19]. High levels of cardiac enzymes and insufficient cSTR have been recognized as an important predictor of long-term mortality in STEMI patients after PCI [20–22]. Strategies to reduce myocardial enzyme and other myocardial parameters after PCI are critical and may enhance clinical outcomes. The most widely applied type of ischemic conditioning during PPCI is ischemic postconditioning (IPoC) which is performed by intermittent reinflation of the stent balloon immediately after reperfusion (within 1 min). IPoC has been demonstrated to reduce myocardial enzyme levels [23, 24], increase left ventricular function [23], and limit infarct size and myocardial edema [25]. However, the short- and long-term clinical outcomes have been shown to be negative [26–28].

RIC is another endogenous protective approach by inflation of an upper-arm blood pressure cuff, which is more applicable and less harmful than IPoC in clinical settings [6]. Our combined analysis of all negative and positive outcomes showed that RIC exerted cardioprotection regarding enzyme level and cSTR. RIC also reduced all-cause mortality and MACCE risk in STEMI patients. Preventative RIC for acute kidney injury following PPCI was proposed in some clinical studies [12, 29], indicating potential systemic organ protection.

The baseline TIMI flow grade before reperfusion therapy for STEMI has been recognized as an influential factor of post-PPCI myocardial injury [30]. The myocardium of STEMI patients with visualized collateral circulation (TIMI flow grade > 1) in initial coronary angiography are protected and could develop smaller infarct size regardless of protective strategies. It is challenging to evaluate myocardial blood flow in some emergency situations, so these patients should be excluded to explore the protective efficacy of the intervention. The baseline TIMI flow grade was 0~1 in most of the clinical trials that confirmed the cardioprotection of IPoC in STEMI [23]. Roubille et al. [31] randomized 100 STEMI patients with a TIMI flow grade of 2~3 and did not identify a cardioprotective effect of IPoC. In our analysis, only four trials excluded the patients with TIMI flow grade > 1, and the cardiac effect was not influenced in other trials that partly included a TIMI flow grade of 2~3. This phenomenon indicated that RIC might be more useful than IPoC in the clinical setting of PPCI. Future clinical trials should verify the potential advantage of RIC.

In the pooled analysis of the RIC-induced protective effect on myocardial parameters, the value of I-squared for the heterogeneity test ranged from 48.0% to 94.1%. Although the exact sources of significant heterogeneity for ischemic conditioning in this setting remain unknown, previous meta-analysis evidence showed that age (IPoC, STEMI), sex (IPoC, STEMI), stenting technique (IPoC, STEMI) [23], andβ-blockers (RIC, adult cardiac surgery) [32] were influential factors of myocardial protection. However, Bøtker et al. [33–35] used individualized patient data in STEMI and found no impact of cardiovascular factors and medications on the increase in MSI by RIC. Heusch et al.[36] reported similar findings with no evident influential factors for reduction of cardiac troponin I release by RIC in coronary artery bypass graft (CABG). Future work should focus on other potentially influential cardioprotection factors of RIC-treated STEMI such as baseline TIMI flow grade [31], diabetes mellitus [37], and symptom-to-balloon time [38, 39].

The robustness of pooled outcomes in our meta-analysis included the evaluation of publication bias and sensitivity analysis. However, the number of included trials or patients in the analysis may be not adequate to draw a definite conclusion. In our analysis, no evident publication bias was observed in myocardial enzyme level and the incidence of cSTR. Sensitivity analysis confirmed that the contributions of each trial to the overall pooled estimates of myocardial enzyme level and the incidence of cSTR were similar. Future meta-analyses should verify these findings.

Although RIC could elicit cardioprotection in patients with STEMI, the underlying mechanisms are not entirely understood. Various animal and human studies have shown that RIC in the peripheral organs could induce the humoral and neuronal transfer of the protective factors to the remote heart [6, 40]. The reperfusion injury salvage kinase (RISK; PI3K-AKT and ERK1/2) [41], endothelial nitric oxide synthase [42], protein kinase C [43], HIF-1α[44, 45], STAT3 [41], and STAT5 [46, 47] signal pathways in the myocardium have been proposed as contributing mechanisms for the RIC-induced IS reducing effect [48]. Mitochondria are recognized as the end effector of these protective signal pathways during RIC, and the established mechanical sites include permeability transition pores [49], KATP channels [50], aldehyde dehydrogenase-2 [5], and mitochondrial proteins S-nitrosation [42]. Slagsvold et al. found that RIC improved mitochondrial function in myocardium from the left atrium [51] and left ventricle [52] of patients undergoing on-pump CABG in proof-of-concept clinical studies. These results from animal and clinical studies may explain the effect of RIC in PPCI.

The strengths of this meta-analysis included a comprehensive analysis of clinical outcomes (MACCE), robust approach (sensitivity analysis and publication bias assessment) [53, 54], sufficient clinical consistency (excluding trials concerning thrombolysis [54–56]), and the ability to garner a large study population. There were several limitations in our study. The potential influence of cardiovascular comorbidities and co-medications on the effect of RIC in STEMI patients could not be analyzed from the available individual patient data [23, 32, 57, 58]. The sample size of the included studies was relatively small. The criterion for cSTR was inconsistent among these studies (> 50% in four [9, 11–13], > 70% in two [7, 14], > 80% in one [15]) . The potential confounding effect on the pooled result could not be ruled out. The heterogeneity of enzymatic result was relatively high. Although we used a random-effect model to pool MACCE results, the definitions varied among the included studies. Differences in early and late clinical outcomes require future investigation by large, well-designed, multicenter clinical trials with long-term follow up.

Available evidence from the present meta-analysis suggested that RIC may confer cardioprotection by reducing elevated myocardial enzymes and increasing cSTR incidence in patients after STEMI. Furthermore, our study showed that RIC improved clinical outcomes regarding all-cause mortality and incidence of MACCE.

The literature review and data extraction were independently completed by two investigators (X.S. and W.P.). Discussion was conducted to reach consensus in case of any disagreements. Quality assessment was conducted using Jadad scoring system [60] of randomization, blinding, withdrawals, and dropouts (a possible score between 0 and 5). Trials with a score greater than 3 were considered high-quality.

The postprocedural myocardial parameters of interest were as follows: myocardial enzyme levels, the incidence of cSTR, MSI, imaging IS, myocardial edema, and LVEF. The area under the curve (AUC) of total serum troponin or creatine kinase isoenzyme MB (CK-MB) level was preferable in the analysis for its potential superiority. If AUC data were not available, peak troponin or CK-MB or CK level was extracted in turn.

The clinical outcomes with ≥ 1 month follow-up were included as follows: all-cause mortality, the incidence of recurrent MI, TVR, stent thrombosis, stroke, and HF. The MACCE were also extracted as a composite endpoint of the included clinical outcomes.

For continuous results (reported with mean and standard deviation or median and interquartile range), we calculated standardized mean differences (SMD) of myocardial enzymes and weighted mean differences (WMD) of LVEF, IS, MSI, and myocardial edema to obtain the pooled estimates with 95% confidence intervals (CI). For dichotomous outcomes (reported with incidence), we calculated the odds ratio (OR) with 95% CI. The random-effect model was used for analysis in consideration of potential clinical inconsistency. Publication bias was assessed by Begg’s and Egger’s test. Sensitivity analysis was used to identify the influence of each included study on the overall estimate of myocardial enzyme and incidence of cSTR. A P < 0.05 (2-sided) was considered statistically significant. All statistical analysis was performed with Stata software (version 9.0; Stata Corporation, College Station, TX).