We aim to evaluate whether resected lymph nodes (RLNs) numbers have prognostic value in patients with gastroesophageal junction cancers (GEJ, Siewert type II). Patients with gastroesophageal junction cancers were identified from the Surveillance Epidemiology and End Results (SEER) registry between 1988 to 2013. Multivariate Cox regression analyses and Kaplan–Meier method were performed to analyze risk factors for overall survival (OS) and cause-specific survival(CSS). A total of 8396 patients who underwent surgeries and had reginal lymph nodes examined were identified. Kaplan–Meier analysis indicated that more numbers of resected lymph nodes (RLNs) were associated with better survival. The five-year OS rates for 1–20 and 21–90 RLNs were 26.8% and 32.4%, with a median survival time of 62 and 72 months, respectively (P < 0.001). The five-year CSS rates were 32.2% and 37.2% in each group, with median survival time of 90 and 101 months, respectively (P < 0.001). Cox regression multivariate analysis showed that year of diagnosis, age, sex, marital status, grade, seer histology, tumor histology, lymph node ratio (LNR) and RLNs as a categorical variable were all significant prognostic factors for both OS and CSS. RLN count is an independent prognostic factor for Siewert type II GEJ cancer patients and patients can achieve better overall and cancer-specific survival with more than 20 RLNs dissected.

Gastroesophageal junction (GEJ) malignancies are among the most common cancer-caused mortality worldwide. Approximately 1.4 million new GEJ cancers are diagnosed every year globally [1]. Its location ranges from the distal esophagus to the proximal stomach. According to the Siewert classification [2]. the GEJ cancers could be divided into 3 subtypes: type I GEJ cancers are 1cm to 5cm above the GEJ, while type II and type III cancers are 1cm to 2cm and 2cm to 5cm below the GEJ, respectively [3]. The 5-year survival for GEJ cancers were 30% with only surgery, which might be attributed to the high recurrence rate of this malignancy and its metastatic potential [4]. As the treatment of gastric cancers is different from that of esophageal cancer, the specific treatment for GEJ cancers remains controversial.

Lymph nodes resection was considered effective in improving overall survival in several tumors [16–18]. Given the metastatic potential of Siewert type II cancer, completed lymphadenectomy might have therapeutic value considering the removal of positive lymph nodes. As Resected Lymph Nodes (RLN) count is the main evaluation for lymphadenectomy, it might be a prognostic index in Siewert type II cancer.

In this study, we aim to demonstrate whether resected lymph nodes numbers have prognostic value in Siewert type II cancer patients and evaluate the potential effect of lymph node status and Lymph Node Ratio (LNR) on the overall and cancer-specific survival by using The Surveillance, Epidemiology, and Results (SEER) database. The Seer database allows us to examine the survival of patients across the facilities around the United States based on individual characteristics, including sex, age, time of diagnosis, histological subtypes, grade, radiation sequence, number of lymph nodes examined/removed, number of positive lymph nodes, marital status, et al.

Table 2: Multivariate analysis of prognostic factors associated with the survival

After comparing the different lymph node ratio in Group 1 and Group 2, significant higher LNR was observed in 21–90 RLNs Group (P = 0.002)

After examined the effect of RLNs on OS (Figure 3) and CSS (Figure 4) by sex, we found that the survival benefit was significantly better in Group 2 than in Group 1 both in male and female (P < 0.05). 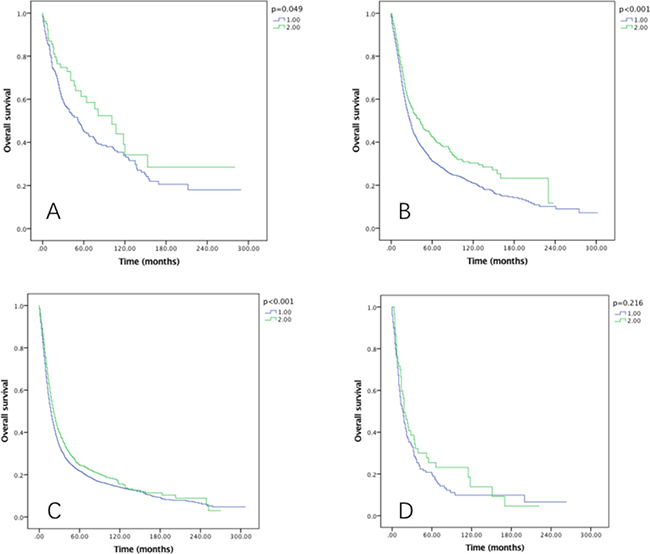 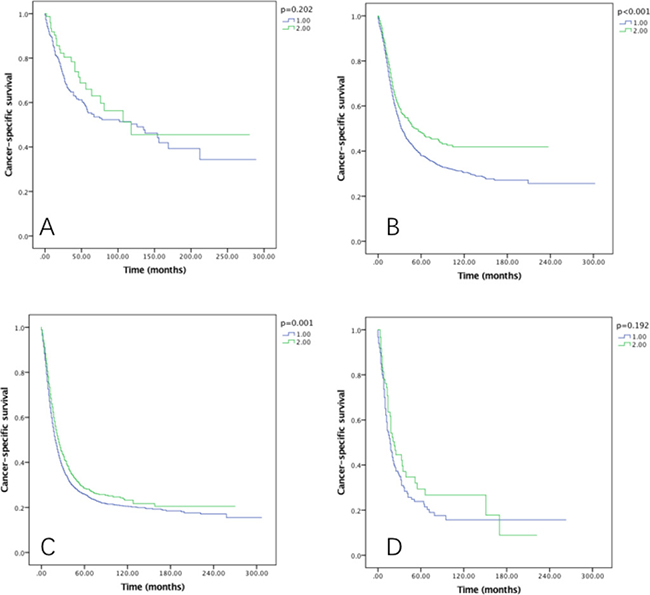 Besides sex and grade, seer histology and tumor histology were also examined on their effect of RLNs on OS and CSS. Seer histology stage was divided into 4 subtypes (reginal, localized, distant and unstaged), and we found that among all these four subtypes, RLNs were significantly associated with OS (Figure 7) and CSS (Figure 8) (P < 0.05). 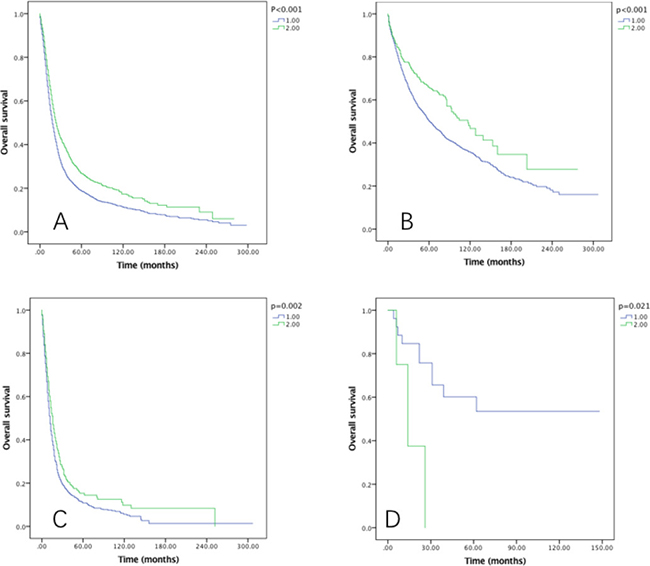 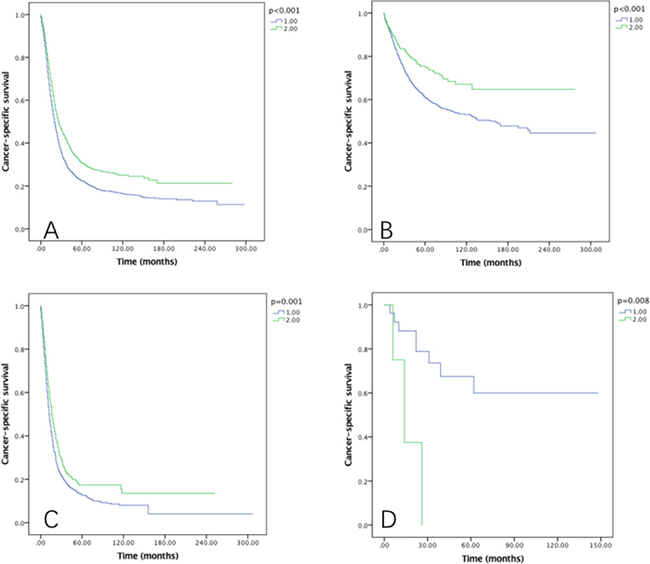 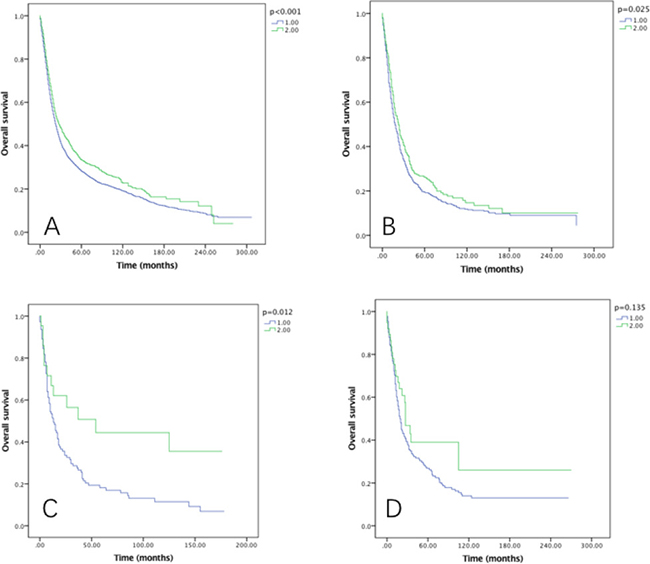 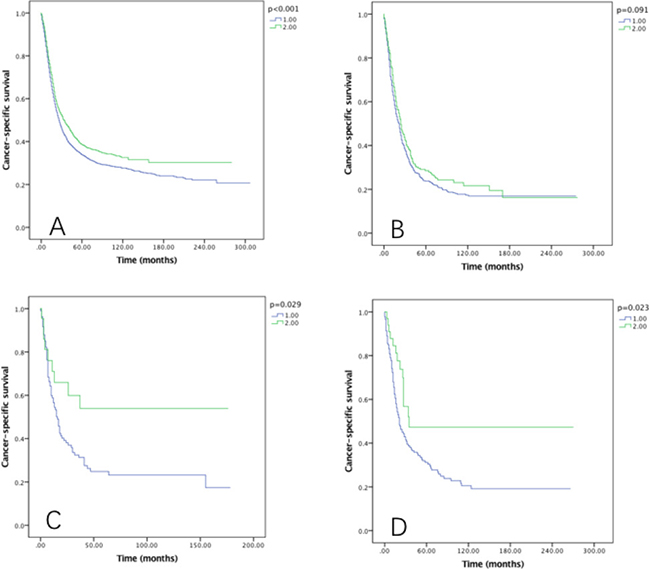 Based on previous studies, the survival of Siewert type II cancers decreased significantly (53% to 11%) when there were lymph nodes (LNs) metastasis, which indicated LNs as a prognostic factor for this cancer [23]. Accordingly, adequate lymph nodes dissection may improve the prognosis of patients. The AJCC staging system suggested at least 15 lymph nodes examined for adequate staging in gastric cancer [19]. For oesophageal cancer the minimum number for resected LNs was not well defined [24], studies have reported the adequate number of LNs ranging from 10 to 40 [25–28]. As to the GEJ cancers, no large cohort study has been reported to validate the optimal RLNs number in Siewert type II cancer. Using the SEER database, this study is currently the largest study exploring the association between survival and the number of RLNs during surgery in Siewert type II GEJ cancer patients.

In Siewert type II cancers, the main affected lymph nodes were the paracardial and lesser curvature nodes, followed by nodes in the lower mediastinum, supra-pancreatic and greater curvature [30]. Stipa et al. suggested total gastrectomy with radical lymphadenectomy could lead to longer survival time [31], while other studies argued that limited lymphadenectomy (paracardial and less curvature nodes) with proximal gastrectomy enjoyed significant improved overall and cause-specific survival [30, 32, 33], which might be an alternative to radical surgical procedure.

Multimodality treatment including preoperative chemotherapy or radiation were validated to yield more satisfying survival outcomes than surgery alone in several studies in Siewert type II cancers. Van et al. enrolled 366 patients with esophageal and gastroesophageal junction cancers and revealed that preoperative chemoradiotherapy enjoyed significant improved 5-year survival than surgery alone (47% vs 24%) [6]. A phase III trial of trimodality therapy also found that the median survival time of GEJ cancer patients can be extended from a median of 1.79 years to 4.48 years, along with the 5-year survival rate elevated from 16% to 39.13% when chemotherapy and radiation was prescribed prior to surgery [35].

There were some limitations in this study. Firstly, the Seer database lacks the data on pathological stage, chemotherapy, the regimens of chemotherapy and other potentially influencing factors that might affect the survival. However, the Seer program offers the data of large number of patients, which may decrease the selection bias generated during single center analysis. Meanwhile, a large prospective multicenter study still needs to be implemented to validate the optimal numbers of RLNs in patients with Siewert type II cancer.

In conclusion, RLNs was an independent prognostic factor for Siewert type II GEJ cancer patients and patients can achieve better overall and cancer-specific survival with 21 or more LNs dissected.

Data was retrieved from the SEER registry, which covered approximately 28 percent of the population of the United States. Patients with Siewert type II GEJ cancers from 1988 to 2013 were identified from the SEER registry. The SEER did not include the Siewert classification in the database, so we included patients satisfying the conditions of both CS Scheme entry of “EsophagusGEJunction” and Primary Site entry of “Cardia, NOS”. Patients without surgery or with multiple primary malignancies were excluded, those with no or unknown reginal lymph nodes examined were also excluded from the study. Informed consent was not required for the extraction of data from SEER program. This study was approved by the ethics committee of the Sir Run Run Shaw Hospital.

31. Stipa FF, Aromatario C, Stipa S. Carcinoma of the cardia: is there a place for proximal gastric resection in cancer of the cardia? Dis Esophagus. 1996; 9:183–6.