Hydrogen protects against liver injury during CO2 pneumoperitoneum in rats

Laparoscopic surgery is a procedure largely preferred than traditional surgery because of its several advantages including slight hemorrhage, less body injury due to small incisions and shorter recovery time [1]. Nevertheless, this procedure is not free from adverse effects and many of them are still under investigation.

To perform laparoscopic surgery the insufflation of a gas is required to induce pneumoperitoneum that provide enough working space inside the abdomen and a better visibility of the internal organs and tissues. At present, carbon dioxide (CO2) is the most commonly used gas to induce pneumoperitoneum [2]. The usual pressure value (11–14mmHg) of pneumoperitoneum is higher than the normal portal blood pressure of 7–10 mmHg [3]. High pressure can cause reduction in liver blood flow which results in oxidative stress and tissue injury [4, 5]. The deflation restores the normal liver blood circulation, but it results in ischemia-reperfusion injury [6].

Liver ischemia induces oxidative stress and reactive oxygen species (ROS) are generated during reperfusion, resulting in a serious liver injury [7]. In addition to oxidative stress, the mechanisms of ischemia reperfusion injury include cell apoptosis and cytokine/chemokine release [8–10]. Although ischemia reperfusion injury is due to multiple factors, ROS play a key role in inducing this injury [11–13]. Several studies show that hydrogen reduces ROS by exerting an antioxidant action, thus protecting against ischemia-reperfusion injury [14–16]. As a therapeutic medical gas, hydrogen can mitigate many diseases including parkinson’s disease, acute pancreatitis, obstructive jaundice and sepsis [17–20]. Moreover, hydrogen protects against tissue damage induced by ischemia-reperfusion by reducing oxidative stress, cell apoptosis and inflammatory cytokines release [21–24]. However, no studies evaluating the protective effects of hydrogen to reduce liver injury during pneumoperitoneum are available. Therefore, the present study was performed to investigate the protective effects of hydrogen on liver during pneumoperitoneum. 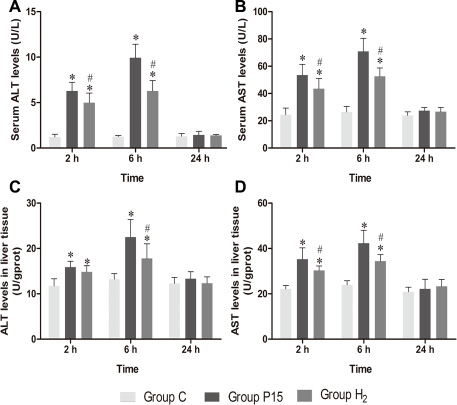 Figure 1: Hypodermic injection of hydrogen gas protected against liver injury induced by pneumoperitoneum. (A, B) The ALT and AST levels in serum. (C, D) The AST and ALT levels in liver tissue. Data are presented as mean ± SD. *p < 0.05 vs C group. #p < 0.05 vs P15 group. 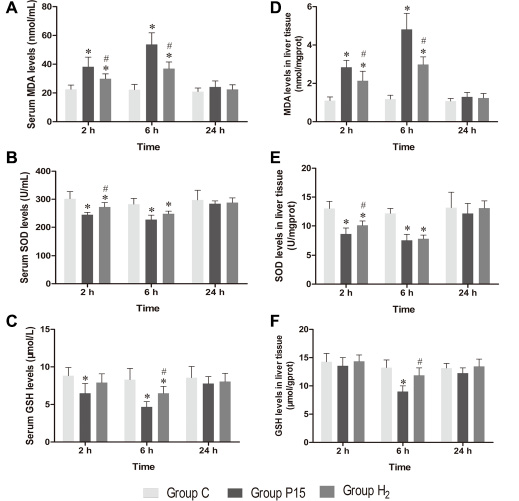 Examination under the light microscope at 6 h revealed no significant pathological changes in C group (Figure 3A and 3B). Differences were observed in liver histology between P15 group and H2 group. Hepatocytes’ nuclei pyknosis, hepatocytes swelling and vacuoles degeneration were observed in P15 group (Figure 3C and 3D). In contrast, in H2 group, similar changes were found but in lesser degree (Figure 3E and 3F). 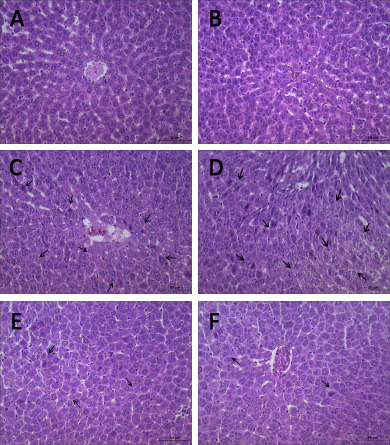 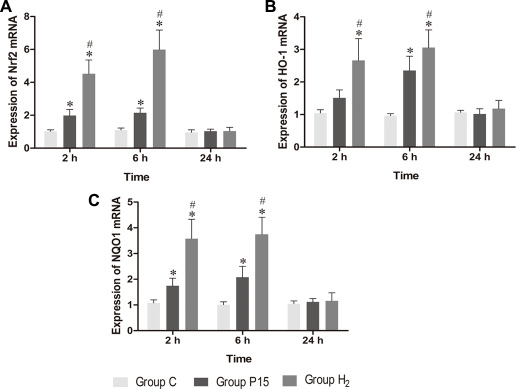 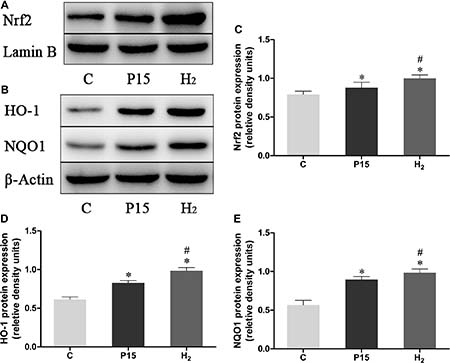 Bax/Bcl-2 and Caspase-3 mRNA expression was increased after pneumoperitoneum, while hypodermic injection of hydrogen gas resulted in a significant decrease (P < 0.05, Figure 6) at 2 h and 6 h. Real-time PCR results were confirmed by western blot at 6 h (Figure 7). 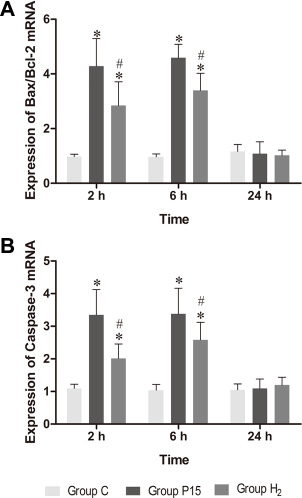 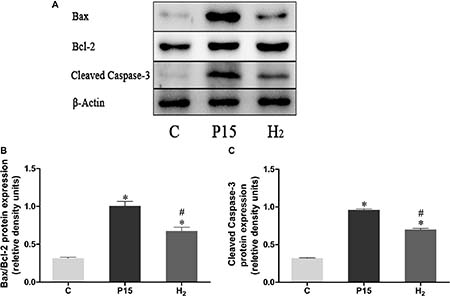 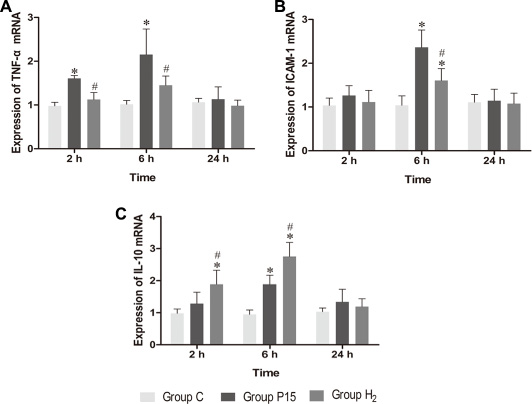 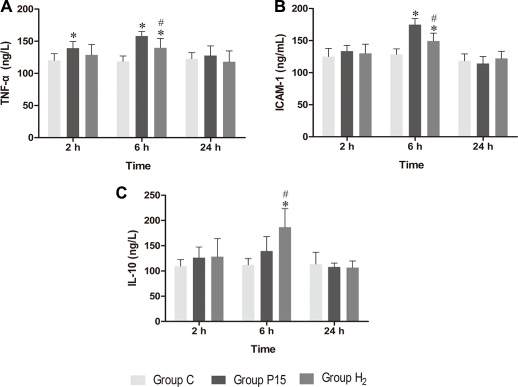 This study was performed to determine the protective effect of hydrogen subcutaneous injection on CO2 pneumoperitoneum inducing liver injury. Pneumoperitoneum is required in laparoscopic surgery and CO2 is the most commonly used gas during pneumoperitoneum. CO2 insufflation can result in a significant ischemia of splanchnic organs, followed by increased reperfusion injury after deflation [25]. Thus, CO2 pneumoperitoneum can cause negative effects on body health. Splanchnic organs such as liver, kidneys, spleen, intestine, ovaries and testicles are susceptible to pneumoperitoneum adverse effects [6, 26–30]. The liver receives blood supply from the hepatic artery and portal vein and it is one of the most susceptible organs affected by ischemia. It has been reported that 10 mm Hg pneumoperitoneum caused significant decrease in hepatic arterial, portal, and microvascular perfusion [31]. In addition, pneumoperitoneum increase from 10 to 15 mm Hg can decrease liver flow by 39%, causing liver ischemia injury, and deflation after surgery resulting in blood reperfusion results in liver ischemia reperfusion injury [32, 33]. Several studies showed that CO2 pneumoperitoneum affects liver enzyme function and causes tissue injury [34, 35]. Our results showed a similar result. Indeed our results showed that ALT and AST levels were increased in both P15 and H2 group, although their levels in H2 group were lower than in P15 group. The histopathological examination reflecting the degree of liver injury showed that injury in H2 group was less than P15 group. Therefore, hydrogen subcutaneous injection could reduce liver injury during CO2 pneumoperitoneum.

The use of H2 results in many advantages. More than 38 diseases can be relieved by the biological effects of H2 [36]. The methods of introducing H2 into the body can be different and include hydrogen gas inhalation, hydrogen water ingestion, and hydrogen-rich saline injection [36]. It has been demonstrated that the protective effect of hydrogen subcutaneous injection is the same as the protective effect obtained by hydrogen water intraperitoneal injection [37]. Furthermore, subcutaneous injection of hydrogen is more convenient, safer and rapidly absorbed compared with hydrogen gas inhalation and hydrogen-rich saline injection. In our study, the results of the biochemical analysis and the histopathological examination showed that subcutaneous injection of hydrogen reduced liver injury induced by CO2 pneumoperitoneum. This protective effect was associated with reduced oxidative stress, apoptosis and inflammatory cytokine production.

Ischemia reperfusion injury producing excess of ROS, results in the downregulation of some endogenous antioxidant enzymes including SOD [38]. SOD is a metal enzyme with a specific biological catalytic function. Superoxide radical can be catalyzed by SOD and transformed into molecular oxygen or hydrogen peroxide. MDA originates from the decomposition of oxidizes protein and lipid peroxyl radicals, thus its content reflects the degrees of lipid peroxidation [39]. MDA can be a cause of oxidative stress as well as a result. SOD and MDA levels usually estimated anti-oxidative ability of the tissue [40]. GSH is an important endogenous antioxidant [41]. GSH protects tissues from oxidative stress injury through ROS detoxification [42]. Our results showed that hydrogen subcutaneous injection reduced liver oxidative stress by decreasing MDA levels and increasing SOD and GSH levels, suggesting a protective effect of hydrogen against oxidative stress. Nrf2 is a transcription factor which acts against oxidative stress injury by mediating the levels of endogenous antioxidants. Keap1 normally binds to Nrf2 to suppress it and keep it into the cytoplasm. However, Keap-1-Nrf2 complex is dissociated after activation of Nrf2 due to oxidative damage, enabling Nrf2 to translocate into to the nucleus. Here, it binds to the antioxidant response element (ARE) and activates the transcription of antioxidant enzymes, including HO-1 and NQO1 [43–45]. Recent studies have shown that Nrf2 can protect liver against ischemia reperfusion injury [46]. Both HO-1 and NQO1 are key response genes, and their activation can protect against oxidative damage in cells [47]. HO-1 exerts cytoprotection by inhibiting inflammation and apoptosis [48]. It can also degrade heme to CO, iron, and biliverdin, exerting an indirect anti-oxidative effect [49]. NQO1 is a flavoprotein and its flavin co-factor plays a key role in the direct scavenging of superoxide [50]. Therefore, NQO1 may directly exert an antioxidant protection. Our results showed that Nrf2, HO-1 and NQO1 mRNA and protein levels were increased by pneumoperitoneum. After subcutaneous injection of hydrogen, both their mRNA and protein levels were significantly increased suggesting an improved liver protection against ischemia reperfusion injury during CO2 pneumoperitoneum through the increase of the antioxidants level.

Some methods are available to reduce pneumoperitoneum-induced injury such as ischemic-preconditioning, pneumoperitoneum preconditioning, low intra-abdominal pressure, stepwise rising CO2 insufflation, melatonin, theophylline, erythropoietin and dexmedetomidine [65–71]. Some agents are also available to reduce ischemia-reperfusion injury such as epigallocatechin-3-gallate, gastrodin, eupatilin and oxymatrine [38, 72–74]. If H2 can be used in clinical practice it would be convenient because it is cheaper compared with those methods, although its inhalation may be dangerous because of its inflammable and explosive characteristics. Subcutaneous injection of hydrogen was safer and simpler than inhalation. Moreover, H2 does not leave residues compared with other drugs. As a potential antioxidant, H2 has many advantages such as rapid diffusion, no direct elimination of functionally important ROS, no toxicity even at higher concentration [36]. Therefore our study highlighted that subcutaneous injection of hydrogen could exert a protective effect on liver injury during CO2 pneumoperitoneum through reducing oxidative stress, cell apoptosis and inflammatory cytokines release. Hence, subcutaneous injection of hydrogen might be a promising approach against pneumoperitoneum-induced livers injury.

Forty-five male Wistar rats, weighing 250–300 g, were housed under an alternating 12-h light/12-h dark cycle and free access to standard rat food and water; the environmental conditions were constant. Food was withheld 12 h prior to anesthesia, but free access to water was allowed. All experimental procedures were performed according to the guidelines approved by the Northeast Agricultural University, Harbin, China.

TNF-α, ICAM-1 and IL-10 in the liver tissue homogenate were determined using the respective ELISA kits (Nanjing Jiancheng Bioengineering Institute, Nanjing, China) as described in the instructions. Absorbance was measured at 450 nm according to a standard curve and cytokines were expressed as ng/L or ng/mL.

Livers in 10% formalin were embedded in paraffin, cut into sections and stained with hematoxylin and eosin. All specimens were examined under light microscope.