Breast cancer is the most common cancer in women, and the leading cause of cancer death in women worldwide. SIRT1 (silent mating type information regulation 2 homolog) 1 is a class-III histone deacetylase involved in apoptosis regulation, DNA repair and tumorigenesis. However, its role in breast carcinoma remains controversial, as both tumor-suppressive and tumor-promoting functions have been reported. Also, there are very few reports available where expression of SIRT1 is comprehensively analyzed in breast tumors classified by molecular subtype. Here, using a cohort of 50 human breast tumors and their matched normal tissues, we investigated SIRT1 expression levels in the 5 molecular subtypes of breast cancer according to the St Gallen classification (2013). Tumors and their corresponding normal tissue samples were collected from all patients, and SIRT1 mRNA and protein expression levels were then examined by real-time quantitative polymerase chain reaction and immunoblotting, respectively. After statistical analysis, the results showed a dual expression profile of SIRT1 in human breast carcinoma, with significant overexpression in luminal and HER2-enriched subtypes and significantly reduced expression in the triple-negative subtype. We also found an inverse correlation between SIRT1 expression and breast cancer aggressivity. These novel findings suggest that SIRT1 plays a dual role in breast tumors depending on its expression rate and the molecular subtype of the cancer. Our data also point to a potential role for SIRT1 as a prognostic biomarker in breast cancer.

Breast cancer is the most common cancer in women, and the leading cause of cancer death in women worldwide [1]. It is a multifactorial genetic disease with different prognoses for different subtypes. According to the St Gallen breast cancer classification [2], there are five distinct molecular subtypes of breast cancer classified in ascending order of tumor aggressiveness, from luminal A, relatively the least aggressive with the most favorable prognosis and survival rate [3], to luminal B (HER2-) and luminal B (HER2+), these 3 subtypes are included in the Hormone Receptor-positive Breast Cancer (HRBC), HER2-enriched or HER2 Breast Cancer (H2BC), and finally triple-negative breast cancer (TNBC), also known as basal-like, which is characterized as very aggressive and associated with poor prognosis and a higher death rate compared to the other molecular subtypes [3]. The process of subtyping breast cancer based on gene expression patterns has clarified differences in biological behavior between subgroups, allowing individualized treatment and better prognosis for each subtype [4].

Silent mating type information regulation 2 homolog 1 (SIRT1), the mammalian counterpart of yeast silent information regulator 2 (Sir2), is the most extensively studied protein in the SIRT family. SIRT1 is involved in key cellular processes such as apoptosis, DNA repair, chromatin remodeling and cancer development [7, 8], but its role in carcinogenesis is controversial, as it can have both tumor-suppressive and tumor-promoting functions, mainly depending on cancer type [9]. For instance, SIRT1-mediated deacetylation of the tumor suppressors p53 [10] and p73 [11] inactivates them, preventing cellular growth arrest, senescence and apoptosis, hence exerting oncogenic functions. On the other hand, SIRT1 is also reported to mediate BRCA1 signaling and inhibit tumor growth through downregulation of oncogenes or by repressing the activity of oncoproteins such as β-catenin [12] and survivin [13]. Furthermore, knockout mice models of SIRT1 are prone to tumor development, which points to a tumor-suppressive SIRT1 action [13]. These seemingly opposite functions might reflect a highly context-specific role of SIRT1 as a tumor-suppressor versus tumor-promotor.

The clinical significance of sirtuins in various human cancers has mostly been evaluated based on sirtuin expression patterns in tumors and non-tumor samples. Generally, overexpression of a protein in tumors indicates its oncogenic properties, whereas reduced expression of a protein indicates its tumor-suppressive properties. Studies using this approach report that SIRT1 is upregulated in a spectrum of cancers including, but not limited to, liver cancer [14], acute myeloid leukemia [15], bone cancer [16], thyroid cancer [17] and skin cancer [18], but downregulated in other cancers including colon cancer [12], oral squamous cell carcinoma [19], glioblastoma and ovarian cancer [20]. Studies in breast cancer have confirmed that SIRT1 is involved in tumorigenesis, metastasis [21] and chemoresistance [22]. However, there have been relatively few studies investigating SIRT1 expression levels to identify its function, and the results are contradictory. A limitation of these studies is that they did not take into account the heterogeneity of various intrinsic breast cancer subtypes, and most of them did not use tissue samples from breast cancer patients but relied on breast cancer cell lines instead. Here, we evaluated both the mRNA and protein expression patterns of SIRT1 using human breast tumors and their corresponding normal breast tissues, in all 5 molecular subtypes of breast cancer. This research brings key insight to the ongoing controversy of SIRT1 behavior in breast cancer carcinoma.

Table 1: Clinico-pathological characteristics of the breast cancer patients included in this study 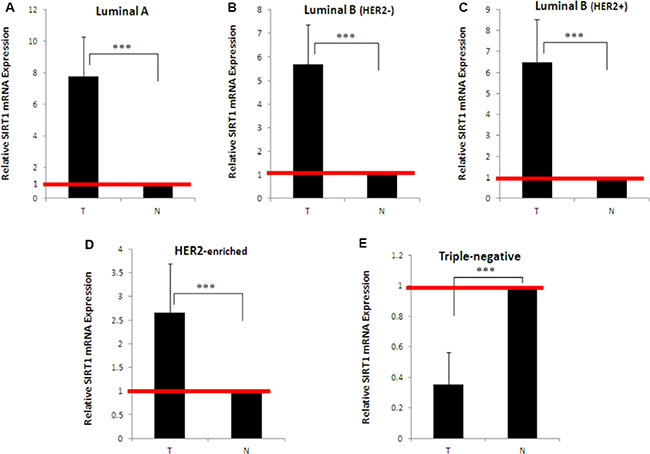 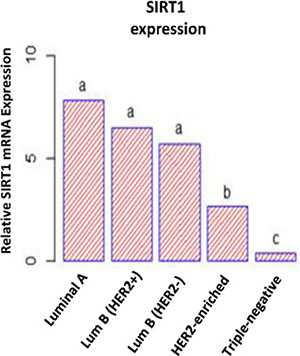 In order to determine whether SIRT1 transcription levels are equally translated into functional proteins, SIRT1 protein levels were assessed in breast tumors and their matched normal tissue samples using immunoblot analysis. We found that SIRT1 protein expression pattern differs amongst the 5 molecular subtypes, as shown in (Figure 3A). In comparison with normal breast tissue, SIRT1 protein expression was significantly higher in (HRBC) subtypes and in the (H2BC) subtype, but significantly reduced in the (TNBC) subtype (Figure 3B). These results are consistent with the mRNA expression level data. 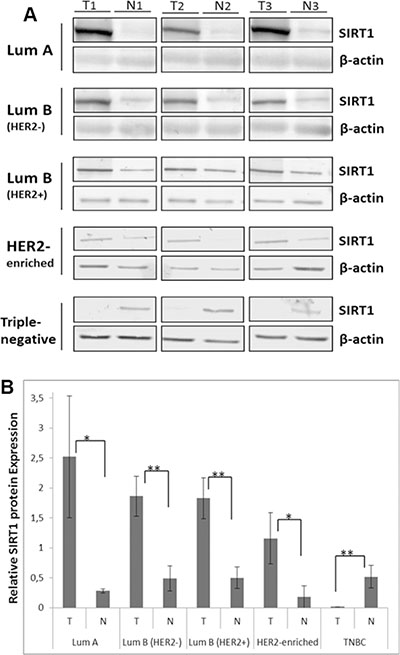 In order to clarify the biological behavior of SIRT1 and evaluate its role in breast carcinoma, we evaluated SIRT1 expression patterns at the transcriptional and translational levels in human breast tumors and their corresponding normal breast tissues, according to St Gallen molecular subtype class. Although some studies have investigated SIRT1 expression in breast cancer, however, this is the first study to extensively examine SIRT1 mRNA and protein expression levels according to intrinsic subtypes with a sample size that satisfies statistical power requirements.

SIRT1 is a class-III histone deacetylase critically involved in the occurrence and development of a multitude of tumors, and reported to be involved in regulating a multitude of biological processes including apoptosis, cell survival, proliferation and stress response. SIRT1 expression levels have been extensively investigated in many malignancies in order to assess its role. SIRT1 expression and function are found to vary drastically depending on cell and tumor types, making it a multifaceted enzyme with contradictory functions depending on its upstream regulators and downstream targets [23]. SIRT1 overexpression has been reported in several human cancers, it was generally associated with poor prognosis and poor overall survival [24], whereas reduced SIRT1 expression was consistent with a tumor-suppressor role [12, 20].

Several studies have investigated SIRT1 expression in breast cancer, but while some studies found upregulated SIRT1 expression, others did not concur. There are multiple reasons that could explain this discrepancy between studies: the fact that SIRT1 expression was evaluated only at transcriptional level [25], or using only breast cancer cell lines [26, 27], and/or using human breast tissue samples but without accounting for the various molecular subtypes [25, 28–30] or without having a statistically sufficient sample size [28, 31]. This unclear picture promoted us to conduct the study here. The results found here revealed different SIRT1 expression patterns among different breast cancer molecular subtypes. We report significant overexpression of SIRT1 mRNA and protein levels in HRBC and H2BC subtypes, and a significant underexpression in the TNBC subtype. This dual expression pattern of SIRT1 in tumors points to a differential role of SIRT1 in human breast cancer. Based on its expression patterns, SIRT1 most probably has an oncogenic role in the HRBC and H2BC subtypes, in line with Elangovan et al. [32] and Ma et al. [33], who reported that SIRT1 overexpression in luminal breast cancer subtypes is correlated with an oncogenic behavior. In contrast, SIRT1 may play a tumor-suppressor role in the TNBC subtype, in line with Yi et al. [34] who reported that the activation of SIRT1 by a SIRT1-specific activator YK-3-237 induced deacetylation of the mutant form of p53 (mtp53), suppressing the proliferation and arresting the cell growth of triple-negative breast cancer cell lines. Furthermore, Simic et al. [35] showed that ectopic expression of SIRT1 suppresses cancer metastasis and tumor cell invasion. Moreover, our findings showed a positive correlation between SIRT1 expression and St Gallen molecular subtype classification. After classifying the breast tumors used in ascending order of aggressivity, decreased SIRT1 expression was found to correlate with increased breast cancer aggressivity and poor prognosis. We conclude that SIRT1 may serve as a prognostic biomarker in breast cancer carcinomas.

In conclusion, this study demonstrated for the first time a differential pattern of SIRT1 expression in breast cancer at both transcriptional and protein level using human breast tumors and their uninvolved benign counterparts, it also established an association between SIRT1 expression and St Gallen classification. Taken together, these results suggest that SIRT1 plays a bivalent subtype-dependent role in breast carcinoma, and that SIRT1 could also be a potential prognostic marker in breast cancer. Given that SIRT1 regulates a wide range of substrates directly involved in the tumorigenesis process, it could make a novel and potentially promising anticancer therapeutic target, especially if results from clinical trials currently testing specific SIRT1 inhibitors are deemed good.

This study included a total of 50 patients admitted to the Centre Jean Perrin from October 2012 to September 2016 for cancer treatment, and diagnosed with breast cancer carcinoma. Patients were informed about the study and gave informed consent prior to inclusion. All 50 tumors and their adjacent normal breast tissues came from the Centre Jean Perrin Biological Resource Center, where they were put in cryotubes and stored in liquid nitrogen at −196°C. Patients who received chemotherapy, hormonal therapy and/or radiotherapy for cancer in other parts of the body were excluded from the study, as were patients with predisposition to breast cancer and/or family members with breast cancer.

Luminal B (HER2+): [ER- and/or PR-positive, HER2-positive, and any Ki-67]; these 3 subtypes are included in the hormone receptor-positive breast cancer (HRBC) group.

Correlation between the clinical parameters of our study groups were examined by chi-square test (χ2 test) using SPSS statistics software (SPSS Inc., Chicago, IL). Multiple-group comparisons were performed by ANOVA using R software (version 3.0.3). Post-hoc comparison of the means was performed using Tukey’s multiple comparison test when the F-test was significant (p < 0.05). Relative expression levels of SIRT1 protein assayed by immunoblotting were assessed numerically using Quantity One software (Bio-Rad, CA). Groups were compared using a two-tailed unpaired Student’s t-test carried out after a Fisher’s exact test. All experiments were done in triplicate and the results were expressed as mean ± SD. In all cases, statistical significance was set at the following P-values: *P < 0.05, **P < 0.01 and ***P < 0.001.