2,2’-Methylenebis (6-tert-butyl 4-methylphenol) enhances the antitumor efficacy of belotecan, a derivative of camptothecin, by inducing autophagy

Autophagy regulation is important for tumor cell survival. Activation and inhibition of autophagy can sensitize tumor cells to anticancer drugs. However, few autophagy-regulating small molecules are available to increase the efficacy of anticancer drugs. Here, we report that 2,2’-methylenebis (6-tert-butyl 4-methylphenol), hereafter referred to as methylenebis, is a novel autophagy-regulating small molecule that sensitizes tumor cells to belotecan, which is a derivative of camptothecin, a topoisomerase I inhibitor. Methylenebis activates autophagic flux by increasing the level of LC3-II and forming autolysosome puncta. Moreover, methylenebis enhances the antitumor efficacy of belotecan by activating both autophagy and apoptosis. Interestingly, methylenebis increased the level of LC3-II and belotecan independently decreased the level of p62, suggesting that methylenebis and belotecan target different steps of autophagy. Finally, we searched for compounds that are structurally similar to methylenebis. Our results imply that the specific structure of methylenebis contributes to its ability to activate autophagy.

Autophagy generally refers to macroautophagy, a process by which target molecules are delivered to autophagosomes. These autophagosomes subsequently fuse with lysosomes, where their contents are degraded [1]. This degradation is defined as autophagic flux; several methods have been developed to measure this process [1, 2]. Autophagy can be easily monitored by fluorescent microscopy and Western blot. Phosphatidyl ethanolamine (PE)-conjugated LC3 (LC3-II) indicates the formation of autophagosomes, and p62, a ubiquitin binding scaffold protein, is a useful marker to monitor the autophagy [1, 3]. Autophagy acts as a double-edged sword in the context of cancer because it can promote or inhibit cancer progression [4] [5]. Moreover, autophagy affects cancer cell responses to anticancer drug treatments and radiotherapy [6, 7]. For instance, cytotoxic autophagy can sensitize cancer cells to anticancer drugs, whereas cytoprotective autophagy can protect cancer cells from anticancer drugs [8, 9]. In addition, autophagy can have no effect on cancer therapy (“nonprotective” autophagy) [10, 11]. Several autophagy-regulating small molecules, such as chloroquine, are being investigated for their abilities to sensitize tumor cells to anticancer drugs [5, 12, 13]. However, there is no method for accurately predicting whether autophagy regulation sensitizes or protects tumor cells from a given anticancer drug [5].

Camptothecin is an alkaloid isolated from the Chinese tree Camptotheca acuminata that specifically targets DNA topoisomerase I [14]. Three derivatives of camptothecin (topotecan, irinotecan, and belotecan) are currently prescribed as anticancer drugs [15, 16]. Belotecan is effective in treating many cancers, including small cell lung cancer and ovarian cancer [17, 18]. Camptothecin has been reported to induce autophagosome formation in breast cancer cells and to induce cytoprotective autophagy, which delays apoptotic cell death [19]. Moreover, knockdown of autophagy related protein 5 (ATG5) and chloroquine treatment both enhance the cytotoxicity of camptothecin and its derivatives [20, 21]. On the contrary, micro RNA (miR-15a and mirR-16) induces autophagy and enhances the antitumor effect of camptothecin [22]. Therefore, combinatorial treatment of camptothecin or its derivatives with an additional autophagy-regulating small molecule is a potential approach for sensitizing tumor cells to anticancer drugs.

In this report, we demonstrate that 2,2’-methylenebis (6-tert-butyl-4-methylphenol), hereafter referred to as methylenebis, and its structurally related compounds regulate autophagy. Moreover, treatment of tumor cells with methylenebis sensitizes them to belotecan, a camptothecin derivative. Our results imply that belotecan and methylenebis have synergistic effects in cancer treatment.

Previous studies have shown that autophagy is important for tumor cell survival. Moreover, excessive autophagy and autophagy deficiency often result in tumor cell death [23]. To identify novel compounds that regulate autophagy, we treated HEK293T cells stably expressing GFP-LC3 (GFP-LC3 cells) with a natural compound library and examined whether GFP-LC3 puncta were formed using a fluorescence microscope [24, 25]. We identified several compounds that regulate autophagy, of which 2,2’-methylenebis (6-tert-butyl-4-methylphenol) was one (Figure 1A). When we treated GFP-LC3 cells with methylenebis, we found that methylenebis induced autophagosome formation in a dose-dependent manner (Figure 1B). We also examined the levels of LC3-II and p62 in HEK293A cells. We found that the level of LC3-II was increased, whereas the level of p62 was decreased, indicating that autophagy is regulated by methylenebis (Figure 1C and 1D). 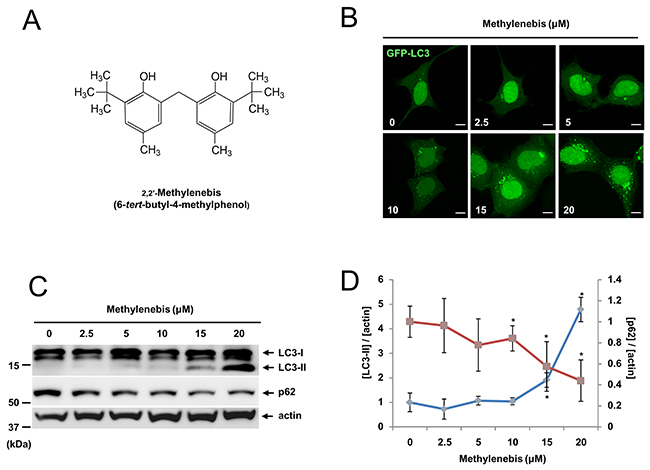 Figure 1: Methylenebis regulates autophagy. (A) Chemical structure of methylenebis. (B) Methylenebis treatment induces autophagosome formation in HEK293 cells stably expressing GFP-LC3 (GFP-LC3 cells). GFP-LC3 cells were incubated with the indicated concentration of methylenebis for 24 h, after which they were fixed and analyzed with a confocal microscope. Bars: 10 μm. (C) Methylenebis treatment increased the level of LC3-II and decreased the level of p62. HEK293A cells were incubated with the indicated concentration of methylenebis (0, 2.5, 5, 10, 15, or 20 μM) for 24 h, after which cell lysates were generated and subjected to Western blotting with anti-LC3 antibodies and anti-p62 antibodies. (D) The LC3-II and p62 bands were quantified, and the relative expression levels are shown in the graph. Mock vs. methylenebis treatment, *P < 0.05. 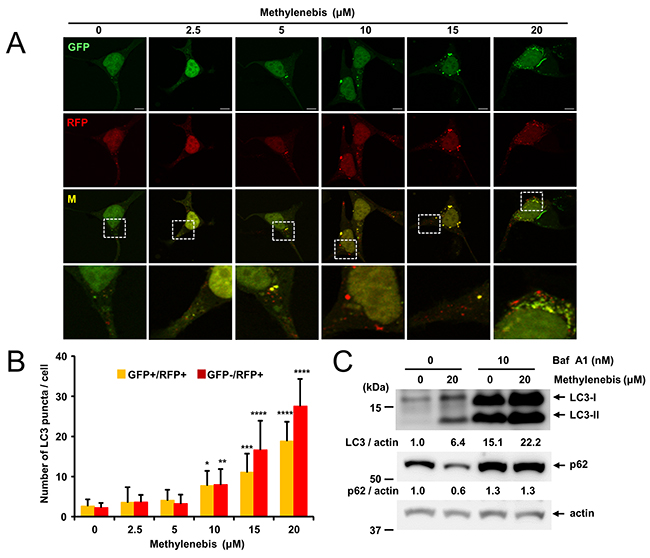 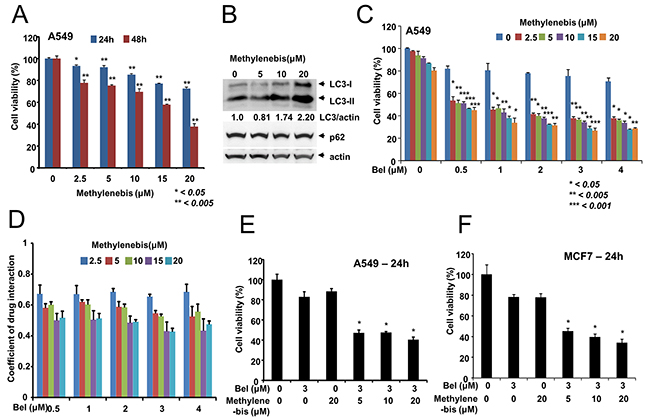 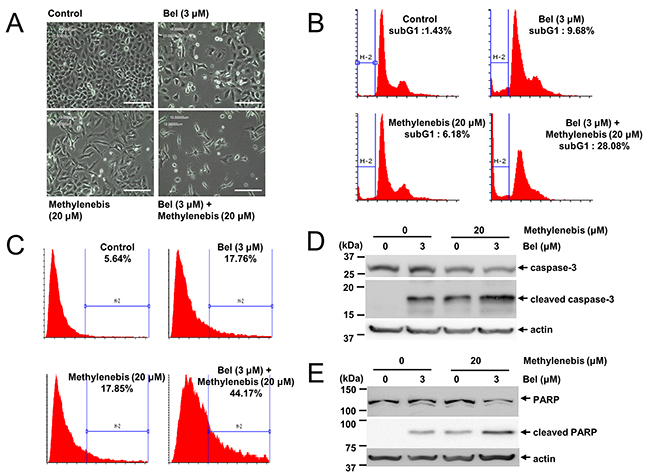 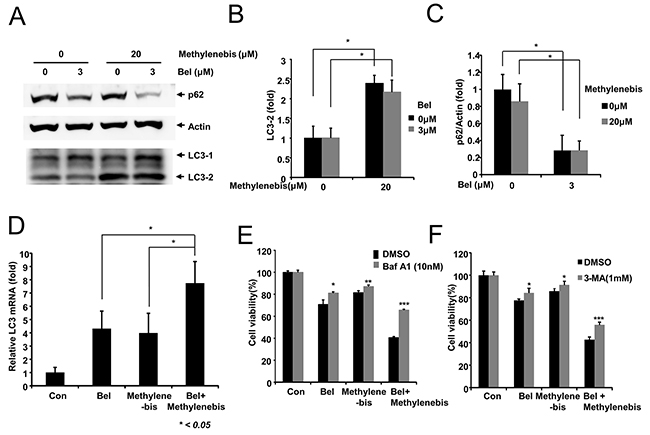 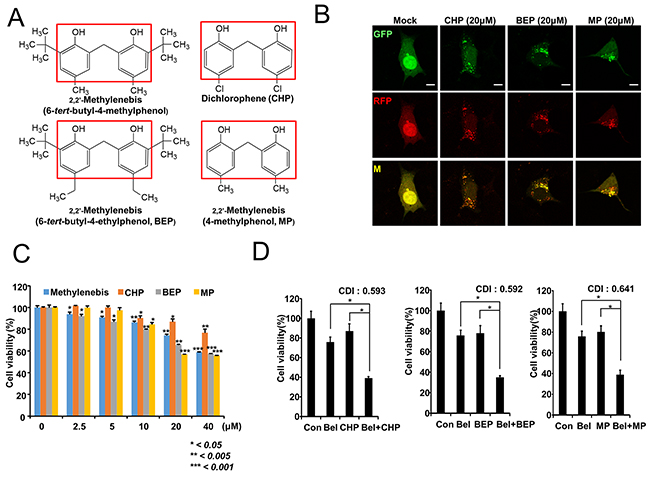 To the best of our knowledge, this is the first report that belotecan regulates autophagy. Belotecan is a derivative of camptothecin, which has been reported to induce cytoprotective autophagy. Therefore, knockdown of ATG5 and chloroquine treatment sensitize tumor cells to camptothecin and to camptothecin-related compounds [20, 21]. Since we showed that methylenebis increases autophagy in this study, it is seemingly paradoxical that the promotion of autophagy sensitizes tumor cells to belotecan. However, autophagy is a double-edged sword, and the proper level of autophagy is important for cell survival. Imbalance of autophagy activity is believed to contribute to cell death. For example, cytoprotective autophagy is induced for cells to respond to anticancer drugs, and the deregulation of cytoprotective autophagy by additional compounds can sensitize tumor cells to the drug treatment. However, it is also possible that belotecan or methylenebis induces cytotoxic autophagy, and that the excessive autophagic flux induced by these two compounds contributes to the enhanced cell death [22].

The enhancement of belotecan activity by methylenebis could help overcome drug resistance in cancer cells and could also decrease the side effects of anticancer drugs by minimizing their doses. Since we identified the initial compound and later found that structurally related compounds had similar activity, there might be additional structurally related compounds that have fewer side effects and improved efficacy. Further studies are required to move the current findings forward into preclinical or clinical trials.

HEK293T, A549, and MCF7 cells were grown in DMEM medium (Welgene, Korea) supplemented with 10% fetal bovine serum (Gibco, Waltham, MA, USA) and 1% antibiotic-antimycotic solution (Welgene, Seoul, Korea). Cell viability was measured using the [4,5-dimethylthiazol-2-yl]-2,5-diphenyltrazolium bromide (MTT) assay. Briefly, cells were seeded in a 24-well plate, incubated overnight, and treated with the antitumor drugs. At the indicated time, MTT solution was added to a final concentration of 1 mg/ml, and the mixture was incubated for an additional 3 hours. MTT was purchased from USB Corporation (Cleveland, OH, USA). Methylenebis was obtained from the Korea Bioactive Natural Material Bank (KBNMB) and from Sigma (St. Louis, MO, USA). For cell cycle analysis, cells were washed and fixed with 70% ethanol. After centrifugation, cells were resuspended in PBS containing 0.25 mg/ml propidium iodide (PI) and 10 mg/ml RNase A (Sigma, St. Louis, MO, USA). Cells were analyzed on a FACSCalibur flow cytometer (Becton-Dickinson, Mountain View, CA, USA). At least 10,000 events per sample were analyzed with Flowing software (Turku University, Finland). For annexin V assay, cells were incubated with FITC conjugated annexin V (KOMA Biotechnology, Seoul, Korea). A549 cells were detached from the plate and incubated with annexin V-FITC for 10 min. The stained cells were analyzed in a FACSCalibur (10,000 cells / sample).

For the tumor xenograft experiments, 1x107 A549 cells were injected subcutaneously into the hind limbs of nude mice. When the tumor size reached 100 mm3, methylenebis and belotecan were administered intratumorally every 4 days. After 4 weeks of treatment (belotecan, 0.65 mg/kg; methylenebis, 3.4 mg/kg), mice were sacrificed. Tumors were excised and fixed with 4% paraformaldehyde in PBS. All animal work was reviewed and approved by the Institutional Biosafety Committee - Institutional Animal Care and Use Committee (IBC-IACUC) of Yonsei University Wonju Campus (IACUC Approval Number: YWCI-201707-015-12).

The coefficient of drug interaction (CDI) was used to analyze the drug interaction between two different drugs. CDI is defined by the following formula; CDI = AB/(AxB) [30, 31]. According to each MTT absorbance, AB is the ratio of the two-drug combination group to the control group, and A or B is the ratio of the single drug group to the control group. CDI < 1 indicates synergism, CDI < 0.7 significant synergism, CDI = 1 additivity and CD > 1 antagonism [30].

27. Lamparska-Przybysz M, Gajkowska B, Motyl T. Cathepsins and BID are involved in the molecular switch between apoptosis and autophagy in breast cancer MCF-7 cells exposed to camptothecin. J Physiol Pharmacol. 2005; 56: 159–79.