Background: To investigate the necessity of routine lymph node dissection (LND) in intrahepatic cholangiocarcinoma (ICC) patients without indications of lymph node metastasis (LNM) preoperatively. Methods: 422 consecutive ICC patients who undergone curative resection from January 2009 to December 2014 were enrolled and categorized as two groups (hepatectomy only or hepatectomy plus LND). Clinicopathologic data was compared between the groups by χ2 or Fisher’s exact test. Overall survival (OS) and recurrence-free survival (RFS) were calculated by the Kaplan–Meier method and differences were analyzed using the log-rank test. Cox regression model was adopted for multivariable analysis. Results: The median OS time of all 422 patients was 41.4 months. One-, 3-, and 5-year OS was 67%, 47%, and 35%, respectively. A total of 73 patients had undergone curative resection combined with LND, of whom 20.5% (15/73) were confirmed lymph node positive pathologically. The clinicopathologic characteristics between LND and control groups showed no significant differences. Of the 422 patients, 271 patients had recurrence. The recurrence rates were 65.8% for the LND group and 63.9% for the non-LND group. Survival analysis revealed that, neither the OS (LND vs. non-LND: 32.2 months vs. 46.2 months; p = 0.16) nor the RFS (LND vs. non-LND: 23.1 months vs. 17.0 months; p = 0.09) had significant difference. Multivariate analysis revealed that tumor size, tumor number, carbohydrate antigen19-9, carcinoembryonic antigen, and gamma-glutamyl transpeptidase were independent predictive factors for OS and RFS. Conclusion: Routine LND may not improve survival in resectable ICC patients with negative LNM diagnosis before operation.

Intrahepatic cholangiocarcinoma (ICC) is the second most common primary liver malignancy following hepatocellular carcinoma (HCC) [1]. Incidence of ICC has been steadily increasing for the past three decades worldwide [2], without much improvement in mortality [3–5]. Unlike HCC which arises in the background of chronic liver disease, ICC often occurs in people with no definite liver disease. Therefore, prevention or screening strategies seem get no way to start. The poor prognosis of ICC is of particular concern. Although resection is considered the only choice of curative treatment for ICC, the prognosis of ICC is still unsatisfactory, regardless of aggressive surgical treatment [6, 7].

Several clinicopathological factors, including tumor number, vascular invasion, distal metastasis, as well as some other clinical parameters, have been evaluated as indicators for survival. Among the parameters studied, lymph node metastasis (LNM) is one of the most relevant factors [8–10]. Patients with positive LNM have unfavorable prognosis [11–14]. However, the necessity of routine lymphadenectomy remains controversial, especially for patients evaluated as negative for lymph node involvement before operation. Some researchers have suggested routine lymph node dissection (LND) for decreasing locoregional recurrence and optimizing pathologic staging [8, 9]. Others have recommended against performing LND routinely, doubting its value for prolonging patient survival [15]. However, all of those studies did not describe the preoperative diagnosis of lymph node involvement when focused on evaluation of the impact of LND. In this study, we analyzed clinicopathological data from 422 consecutive ICC patients to assess the impact of LND on patient’s survival, to clarify the utility of routine LND in surgical treatment of ICC patients without LNM.

A total of 733 patients were diagnosed with ICC and confirmed pathologically at the Liver Surgery Department, Zhongshan Hospital, Fudan University (Shanghai, China) from January 2009 to December 2014. Of these 733 patients, 311 did not meet the entry criteria and were excluded. Among them, 54 were excluded for receiving other treatments preoperatively, namely liver resection, transarterial chemoembolization and radiofrequency ablation; 15 patients were excluded due to the presence of other primary malignancies concurrently (including patients with ICC combined with other primary liver malignancies); 28 patients were excluded because they only received a laparotomy and biopsy; and 214 patients with cLNM-positive were also excluded. A total of 422 ICC patients with cLNM-negative met the inclusion criteria specified for this study (Figure 1). The demographic and clinicopathologic data for the enrolled patients are summarized in Table 1 and the data for LND patients are in Supplementary Table 1. Solitary tumor was present in a majority of patients (n = 335; 79.4%) and the median tumor size was 5.2 cm (range, 0.8 to 18.0 cm). After surgical resection, 169 patients (40.0%) received adjunctive treatments, including adjuvant chemotherapy and radiation therapy. 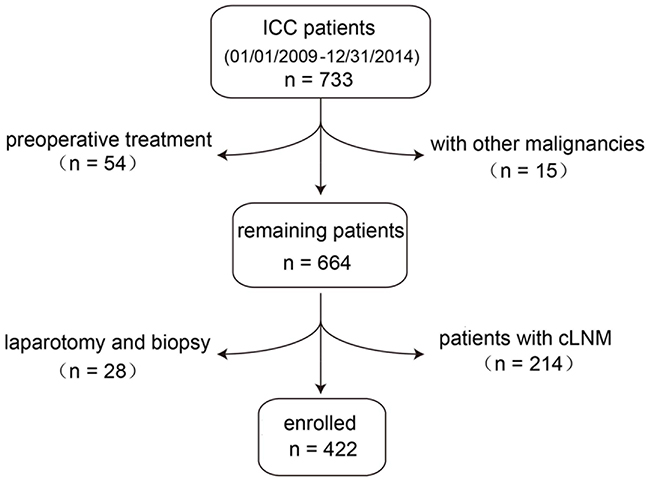 Figure 1: Schematic of process for enrolling patients. A total of 733 patients were diagnosed with ICC and confirmed pathologically from January 2009 to December 2014. We excluded 54 patients with preoperative treatment; 15 patients were excluded for other accompanying malignancies; 28 patients were excluded because they only received a laparotomy and biopsy. Evidence of LNM, either by intraoperative palpation or by positive imaging examination before operation, was defined as clinical Lymph Node Metastasis (cLNM). After evaluation, 422 patients were finally enrolled in the study.

Among the 422 patients with cLNM-negative ICC who were enrolled in this study, 73 (17.3%) had undergone lymphadenectomy (categorized as the LND group). To explore whether routine LND would benefit ICC patients with cLNM-negative, we first compared the clinical characteristics between the LND and non-LND groups. We found that there was no statistically significant difference in the clinical characteristics analyzed between the two groups (Table 1). However, LND group have longer hospital stay after operation (9.8 day) than that of Non-LND group (8.7 day, p = 0.03). 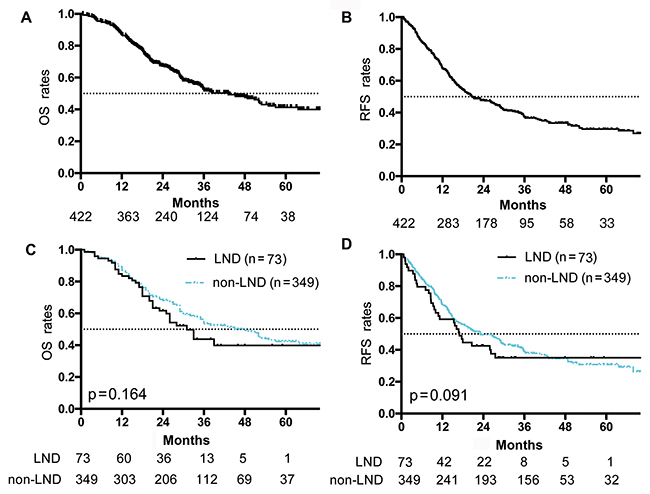 Table 2: Univariate and multivariate analysis of prognostic factors for OS

Table 3: Univariate and multivariate analysis of prognostic factors for RFS

ICC is a cancer characterized by low incidence but high mortality, and the morbidity is even still increasing worldwide. ICC presents higher probability of local LNM than HCC, and the 5-year survival rate of ICC patients is lower when compared with that of HCC patients. Several studies have reported prognostic factors for ICC, with LNM confirmed to be one of the most significant independent indicators [8–10]. In the present study, patients with pLNM indeed had worse outcome even after LND. Although increasing numbers of researchers accept that LNM strongly influences patient survival, the beneficial effect of prophylactic LND on survival remains controversial, especially when treating patients evaluated as negative lymph node involvement before operation.

For patients with cLNM-negative, but pLNM-positive ICC, LND seemed to bring additional benefits for their survivals. Therefore, researchers supporting routine LND argued that preoperative imaging assessment lacks accuracy [15, 19, 20]. However, in this study, only 20% (15/73) cLNM-negative patients were finally proved LNM pathologically. Most of cLNM-negative patients (80%) showed consistent diagnosis after final pathologic evaluations. And we found cLNM-negative ICC patients showed almost the same survival rate when compared with pLNM-negative ICC patients, this result similar with literature report [21, 22]. Besides, with the development of imaging system, the accuracy of LNM detection by preoperative imaging examination has been improving in recent years [23, 24]. Enhanced CT or PET-CT could reach nearly 99% negative predictive value in patients without LNM [25]. Along with routine intraoperative assessment (such as palpation), the accuracy of clinical diagnosis of LNM has been increased and the demand of LND to exclude the false negative of cLNM diagnosis would be diminishing.

The prolonged time span for LND also increases the risk associated with surgery. Kim [29] reported significantly higher risks of postoperative complications in patients who had LND (36.3%, 41/113), compared to those who did not (22.5%, 23/102). The increased postoperative complications included bile leakage, intra-abdominal fluid collection, wound infection, ileus. In the present study, LND group showed longer postoperative hospital stay than that of Non-LND group (9.8 day vs. 8.7 day, p = 0.03). Therefore, LND should be considered with caution during the surgery if it would bring no survival benefit for ICC patients [30].

Other factors in the present study that influenced prognosis were tumor number, tumor size, differentiation, and levels of CA19-9, CEA, and GGT, consisted with literature reports [10, 31, 32]. One of the advantages of our study is the large number of cases enrolled. Most patients (65%) reached the 3-year follow-up. However, we also note the limitations in this study. Our results were based on retrospective data from a single institution. The results need be further validated in prospective, randomized controlled trials.

Different from previous study, this study focused only on the patients with negative evidence of LNM by intraoperative palpation and imaging examination before operation. We discussed the necessity of prophylactic LND in various aspects, including survival benefit, accurate staging and setting postoperative treatment plans. To our knowledge, this is the first study focused on cLNM-negative ICC patients and evaluated the prognostic value of LND in these patients. The results suggested that without sufficient indication, routine LND should not be applied for ICC patients, especially for those evaluated as negative LNM before operation.

The study protocol was approved by the Clinical Research Ethics Committee of Zhongshan Hospital, Fudan University. ICC in the present study refers to adenocarcinoma arising from second order or more distal branches of the intrahepatic bile ducts. The inclusion criteria are as follows. The patient: 1, received curative resection from January 2009 to December 2014; 2, was diagnosed with ICC by 2 experienced pathologists; 3, had no other malignancies concurrently; 4, had no evidence of LNM by intraoperative palpation and imaging examination before operation; and 5, received no anti-tumor treatment before the surgery. Preoperative imaging was obtained either from computed tomography (CT) or magnetic resonance imaging (MRI). In several cases, positron emission tomography-computed tomography (PET-CT) was also performed.

Surgical procedures and definitions of parameters

The type of hepatectomy was determined by the location of the lesion, based on Couinaud’s classification of hepatic segments. During the procedure, the lymph node status of all patients was assessed by the chief surgeon. Patients with no evidence of LNM by intraoperative palpation as well as negative for LNM based on the imaging examination were defined as negative for clinical lymph node metastasis (cLNM). The extent of lymphadenectomy in the present study included: 1, lymph nodes located around the hepatoduodenal ligament and the hepatic artery; 2, retropancreatic lymph nodes (for ICC originating in the right hemiliver); and 3, lymph nodes around the cardiac portion of the stomach and along the lesser curvature (in patients with ICC originating in the left hemiliver) [13].

In the present study, tumor-node-metastasis (TNM) staging followed the guidelines of the eighth edition of the American Joint Committee on Cancer/International Union against Cancer. Presence of microscopic vascular invasion or macroscopic tumor thrombus was defined as vessel invasion. Tumor size referred to the maximum tumor diameter and 2 cm was adopted as the cut-off value for patient grouping, according to the Liver Cancer Study Group of Japan [33].

After resection, all patients had informed follow-up every 3-4 months for the first 2 years and then every 4-6 months for the next year. Clinical information was recorded at visits, including results of blood tests and imaging examination, initially performed using ultrasonography and CT or MRI, if recurrence was suspected. Patients also received telephone follow-up every 6 months. All patients were followed up to December 2016.