Background and Objective:It is unclear whether early morphological change (EMC) is a predictive marker for regorafenib in metastatic colorectal cancer (mCRC). Therefore, the present study investigated whether EMC can predict the outcome of mCRC patients receiving regorafenib.

Materials and Methods: This retrospective study included mCRC patients with lung and/or liver metastases receiving regorafenib. CF in lung metastasis and MR in liver metastasis were evaluated at the first post-treatment computed tomography scan. EMC was determined as CF and/or active MR. We compared PFS and OS between patients with and those without EMC.

Conclusions: EMC could be a useful predictive marker for regorafenib in mCRC.

Colorectal cancer is the third most common cancer and the fourth leading cause of cancer-related mortality worldwide [1]. Although the prognosis of patients with metastatic colorectal cancer (mCRC) has improved with the development of systemic chemotherapy, the median survival time is around 30 months, and this should be improved [2, 3]. Recently, two active agents (regorafenib and TAS-102) have been approved in Japan as salvage-line treatments for mCRC refractory to standard front-line chemotherapy.

Regorafenib is a multi-target tyrosine kinase inhibitor that targets angiogenic, stromal and oncogenic kinases and it was clearly demonstrated to prolong the survival duration of heavily treated mCRC patients when compared with placebo in two randomised phase III trials (CORRECT and CONCUR) [4, 5]. Regorafenib showed a disease control rate (DCR) of 41–51%. However, it caused some unfavourable side effects, such as hand-foot skin reaction, fatigue, hypertension and diarrhoea, which could worsen a patient’s general condition and quality of life [4, 5]. Predictive markers for mCRC patients treated with regorafenib are desired, but such markers have not yet been elucidated [6].

The radiological changes with vascular endothelial growth factor (VEGF) pathway inhibitors have been suggested to be a surrogate for clinical activity [7, 8]. In colorectal cancer, Chun et al. reported that morphologic response (MR) based on computed tomography (CT) findings had a significant association with pathologic response and overall survival (OS) among patients with liver metastasis treated with bevacizumab-containing chemotherapy [9]. Furthermore, Ricotta et al. reported that cavity formation (CF) of lung metastasis on CT scans performed at the earliest post-baseline evaluation (at week 8) might predict OS and progression-free survival (PFS) in patients treated with regorafenib [10]. Therefore, early morphological change (EMC) might be a predictor of the outcome of patients receiving regorafenib. However, results have not been conclusive because of a small sample size and lack of validation.

Therefore, we conducted a multicenter retrospective study to investigate whether EMC can predict the outcome of mCRC patients receiving regorafenib.

The study evaluated 96 mCRC patients who received regorafenib. After excluding 28 patients who were not eligible (Figure 1), 68 patients were finally recruited in this study (analysis 1: 52 patients with lung metastasis, analysis 2: 45 patients with liver metastasis, and analysis 3: 68 patients with lung and/or liver metastases). The baseline characteristics are shown in Table 1. Almost all patients were refractory or intolerable to standard front-line chemotherapeutic agents (fluoropyrimidine, oxaliplatin and irinotecan; 100%, bevacizumab; 99%, anti-epidermal growth factor receptor (EGFR) antibody; 88%, KRAS or RAS wild-type tumour), whereas only 22% of the patients had previously received TAS-102. In each analysis, patient characteristics between the subgroup with and that without morphological change were almost well balanced. The median (range) period between the start of regorafenib therapy and the first post-treatment CT scan was 55 (20-133) days and this was comparable between the subgroup with and that without morphological change in each analysis. 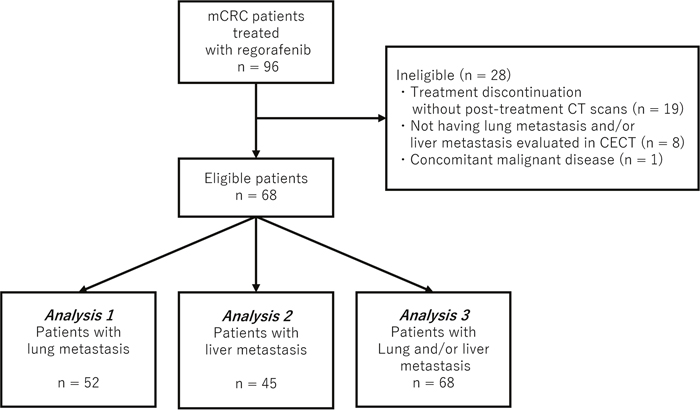 *Interval from the start of regorafenib to the first post-treatment CT scan. 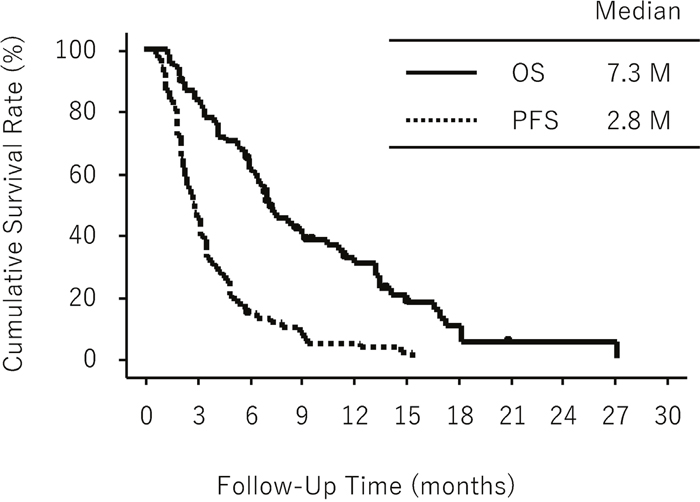 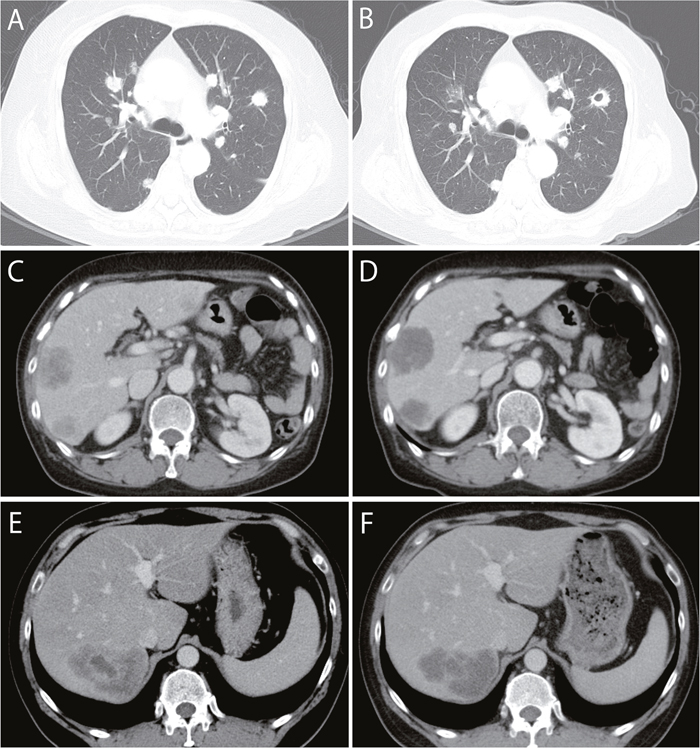 Of the 45 patients in analysis 2, 39 and 6 patients were classified into groups 3 and 2, respectively, at the baseline CT scan. Among them, one patient in group 3 converted to group 1 (optimal response), 13 patients in group 3 converted to group 2 (incomplete response) and the rest did not show a group change (none) at the first post-treatment CT scan. Therefore, 14 (31%) patients had active MR. Discrepancy in grouping between the two evaluators occurred in 7 cases (16%) (5 cases included discrepancy about group 2 or 3 and 2 cases included discrepancy about group 1 or 2), but the discrepancy was resolved by consensus review. Exemplary CT images of active MR in both typical (without discrepancy) case and discrepant case are shown in Figure 3. 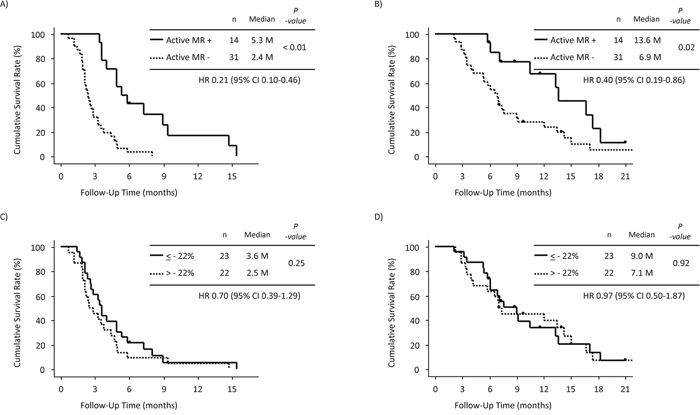 This is the first study to evaluate EMC for predicting the outcome of mCRC patients treated with regorafenib. We demonstrated that the frequency of EMC was 37% and that EMC could be a positive predictor for PFS, OS and the DCR.

CF in lung lesions has been reported to be an effect of angiogenesis inhibitors in lung cancer, with a frequency of 14–24% after treatment involving combination therapy or monotherapy with antiangiogenic agents [8, 11, 12]. Recently, Ricotta et al. reported about this morphological change in mCRC patients receiving regorafenib in a post-hoc analysis of the CORRECT study [13]. They showed that CF occurred with a high frequency (38.7%) and was associated with a lower rate of PD (CF+ vs CF−: 29.3% vs. 60.9%) at 8 weeks after starting regorafenib therapy. Our study demonstrated that CF occurred in 31% of patients at the first post-treatment CT scan and was associated with a higher DCR (CF+ vs. CF−: 81% vs. 36%), and these findings are consistent with the findings in the study by Ricotta et al. Furthermore, our results suggested that CF could predict better OS and PFS in patients receiving regorafenib, which has never been reported previously.

Anti-angiogenic agents are known to cause radiological change in liver lesions [9, 14]. This change can be described by the following two parameters: heterogeneity of attenuation and definition of the tumour-liver interface. Evaluation of MR is subjective with interpretation of these radiological parameters, and the frequency of discrepancy among evaluators in scoring MR has been previously reported to be 26% [9]. Discrepancy occurred in 18% of cases in the current study. On the other hand, change in the CT attenuation value is an objective parameter, and previous reports have shown that HU reduction after treatment with sorafenib or sunitinib was associated with longer PFS and greater tumour shrinkage in renal cell carcinoma [15, 16]. Therefore, we evaluated both MR and the change in the attenuation value for predicting the outcome in mCRC patients treated with regorafenib. Our results suggested that ‘optimal’ and ‘incomplete’ MR well predicted better OS, PFS and the DCR in comparison with ‘none’ MR. However, change in the CT attenuation value was not demonstrated to be a predictor of any outcome, which is consistent with the finding in a previous report [17]. We speculate that MR is more representable for the anti-angiogenic effect of regorafenib than CT attenuation change, because disease progression could also lead to HU reduction through lack of blood supply and central necrosis resulting from a rapid increase in tumour volume.

We evaluated EMC as a combination of CF and MR for the prediction of outcomes in patients with lung and/or liver metastases. Our result indicated that EMC could significantly predict longer OS and PFS, and a higher DCR. Interestingly, the prediction utility of EMC was also recognised in a limited population with SD according to RECIST.

The present study has some limitations. First, this was a retrospective study with a small sample size; another large cohort study may be required to validate and generalize our results. Second, the timing to evaluate EMC was not completely uniform. Although we usually conducted CT scan every 6-8 weeks, there were some cases with shorter or longer interval between treatment initiation and first post-treatment evaluation by physician’s discretion. Last, MR is a subjective parameter, but frequency of discrepancy among evaluators was not different among studies.

In conclusion, both CF in lung metastasis and active MR in liver metastasis could predict good outcomes in mCRC patients treated with regorafenib. EMC, as a combination parameter of CF and active MR, may be an effective marker to encourage patients and physicians or to facilitate early decision-making for the discontinuation of regorafenib in clinical practice.

We retrospectively reviewed the records of mCRC patients who received regorafenib between January 2011 and July 2016 at St. Marianna University School of Medicine or Chiba Cancer Center, Japan. All patient data were extracted from the hospital database. The eligibility criteria were: (1) histologically proven adenocarcinoma of the colon or rectum; (2) presence of lung and/or liver metastases; (3) absence of concomitant aggressive malignant diseases; (4) presence of a refractory or intolerant condition to fluoropyrimidine, oxaliplatin, irinotecan, anti-VEGF antibody and anti-EGFR antibody for KRAS (or RAS) wild-type tumour (including non-administration of agents because of comorbidity or refusal); (5) more than two prior regimens; (6) Eastern Cooperative Oncology Group performance status (ECOG PS) of 0–2; (7) CT assessment performed at baseline and after treatment (if only liver metastasis was present without lung metastasis, contrast-enhanced CT was required at baseline and after treatment). This study was approved by the Institutional Review Board of St. Marianna University School of Medicine and Chiba Cancer Center. All procedures were in accordance with the Helsinki Declaration. All patients provided written informed consent before treatment initiation.

Patients orally received 160 mg of regorafenib once daily for the first 3 weeks of each 4-week session. Dose reduction, including starting dose, was allowed appropriately at the physician’s discretion. Chemotherapy was repeated until disease progression, an unexpected serious adverse event, or patient refusal.

In this study, we evaluated contrast-enhanced CT scans, with scanning in a single phase (portal venous phase) and a slice thickness of 5 mm, at both baseline and first evaluation after starting regorafenib therapy. An independent radiologist and independent oncologist blinded to the treatment outcome assessed EMC in the first post-treatment CT scan and compared the findings with those at baseline. EMC was defined as CF in lung metastasis and/or active MR in liver metastasis. CF was defined as the emergence of an air-filled cavity of ≥10% or increase in a pre-existing cavity, in at least one lung metastatic lesion. Active MR was defined as ‘optimal’ or ‘incomplete’ response, according to the criteria reported by Chun et al. in mCRC patients receiving bevacizumab [9]. Liver metastasis was classified into the following three groups: group 1, characterised by homogeneous attenuation with a thin, sharply defined tumour–liver interface; group 3, characterised by heterogeneous attenuation and a thick, poorly defined tumour–liver interface; and group 2, characterised by morphological features between those of groups 3 and 1. In the criteria presented by Chun et al., three types of MR were defined according to the pattern of group change from baseline to the first evaluation as follows: ‘optimal’ response if the group changed from 3 or 2 to 1; ‘incomplete’ response if the group changed from 3 to 2; and ‘none’ if the group did not change or increased. In cases with multiple liver metastases, MR was decided according to the dominant response pattern. If the grouping differed between the two evaluators, the group was determined by consensus review including careful discussion and fitting between them.

We performed the following analyses: analysis 1 (included patients with lung metastasis), analysis 2 (included those with liver metastasis) and analysis 3 (included those with lung and/or liver metastases). Patient demographics were summarised by descriptive statistics. These demographics were compared between patients with and those without morphological change using Fisher’s exact test (binary variables) or the chi-square test (ternary variables) for categorical variables and the Mann–Whitney U test for continuous variables.

Tumour response was assessed using the Response Evaluation Criteria in Solid Tumours (RECIST) version 1.1. Confirmation of SD required at least a 6-week interval from the start of treatment. The DCR was defined as the proportion of patients with the best response with regard to complete response, partial response, or SD. The DCR was compared between patients with and those without morphological change using Fisher’s exact test.

We thank Ryota Hama for invaluable help especially with assessment of CT findings. We would like to thank Enago (www.enago.jp) for the English language review.

We had no financial supports for this work.