Epidermal growth factor receptor (EGFR) tyrosine kinase inhibitors (TKIs) have become standard therapy for advanced non-small cell lung cancer (NSCLC). Patients with activating EGFR mutations benefit from EGFR-TKIs such as erlotinib and gefitinib, which prolong progression-free survival (PFS) and improve the response rate [1–3]. The most frequent EGFR mutations with sensitivity to TKIs in NSCLC are exon 19 deletions and the single-point substitution L858R in exon 21, which account for about 44% and 41% of all EGFR mutations, respectively, and are termed common mutations [4]. Additional rare EGFR mutations that have been identified include G719X in exon 18 (about 4%) and L861Q in exon 21 (2%), which are modestly sensitive to EGFR-TKIs, and insertions in exon 20 (about 4%), which are less sensitive to EGFR-TKIs [5–7].

Among EGFR mutations, deletions of exon 19 are more complex because they consist of different subtypes. The majority of cases encompass the amino acids from codons L747 to E749 (designated as the LRE fragment) [4]. According to the Catalogue for Somatic Mutations in Cancer (COSMIC) database for EGFR, the most frequent exon deletions are delE746-A750 (68.9%), followed by delL747-P753insS (6.0%), delL747-T751 (4.1%), and delL747-A750insP (3.9%) [8]. Previous researchers [9] showed that different subtypes of EGFR exon 19 are associated with different clinical outcomes in response to first-line TKI therapy, with TKIs showing better efficacy for delE746 than delL747. Therefore, deletion locations may affect TKI efficacy [10].

EGFR genotyping is now routine practice in the management of NSCLC. Different methods have been developed to identify EGFR mutations. Sanger sequencing is the standard assessment method for EGFR mutation identification, but it is time-consuming and lacks sensitivity. Various polymerase chain reaction (PCR) methods, such as amplification refractory mutation system (ARMS) and peptide nucleic acid (PNA) clamping, have been developed to detect EGFR mutations with increased sensitivity and in less time. However, the ARMS approach cannot cover all types of EGFR exon 19 deletions, and a false negative result is sometimes obtained [11, 12].

In this study, we retrospectively analyzed the molecular changes of EGFR exon 19 and their associations with clinical outcomes of treatment with TKIs. Based on the different base pair changes in exon 19, we also aimed to develop a sensitive approach to detect all of the subtypes of EGFR exon 19 deletions.

Sensitivity of ddPCR method based on PNA clamping

Figure 3: Comparison of progression-free survival (A) and overall survival (B) among Del-E746, Del-L747 and non-LRE groups.

Multivariate analysis of factors associated with PFS and OS in 158 patients with advanced lung adecocarcinoma treated with EGFR-TKIs was performed and is summarized in Supplementary Table 3. Eastern Cooperative Oncology Group (ECOG) performance status was shown to be independent predictors of PFS. 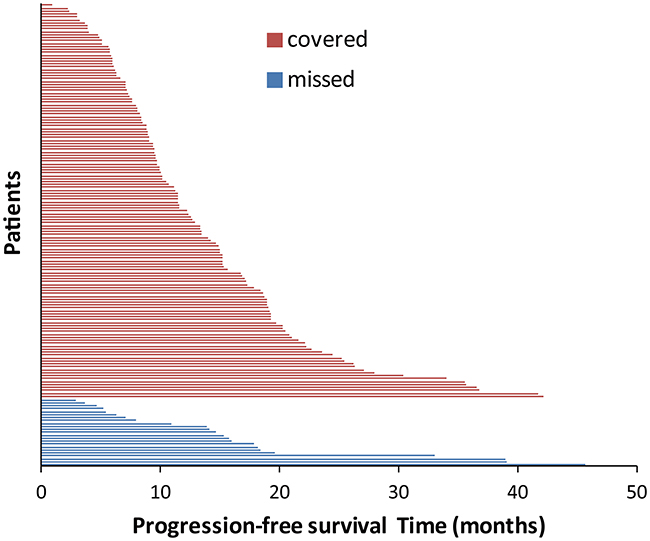 The present article retrospectively analyzed EGFR mutation data from a cohort of 2664 consecutive patients with NSCLC. A total of 440 (16.5%) samples had exon 19 deletions that could be further classified into 39 subtypes. Among them, eight subtypes were predominant and accounted for 86.9%, consistent with the COSMIC database for EGFR and the public literature [8]. Of the 39 subtypes, 20 have been reported in the COSMIC database, but 19 subtypes had not.

In China, ARMS, available as a commercial kit, is one of most widely used methods for detecting EGFR mutations. However, because it is based on an allelic-specific PCR technique, this method can only detect a few exon 19 deletion subtypes [12–14]. In our data, only 10 subtypes were covered by the commercial kit (shown in Table 2 with purple letters). That is, 29 subtypes could not be detected using this kind of commercial kit (Table 2). Thus, 72 (16.4%, 72/440) deletion samples would have been missed and the affected patients would lose the opportunity to receive TKI targeted treatment.

To our knowledge, the present study constituted the first analysis of EGFR exon 19 deletion subtypes in Chinese patients with NSCLC. Our data showed that deletions occur throughout almost the entire exon 19 amino acid string from E746 to D761 involving 16 amino acids, and could be defined as 39 subtypes. Over half of the subtypes were complex, with an accompanying insertion. Marchetti et al. showed with next generation sequencing that 20% of EGFR exon 19 deletions are complex frame shift deletions producing a net in-frame change. In some cases, even Sanger sequencing could not define the exact sequence of the mutant allele. The data of these authors support the hypothesis that a region within exon 19 is particularly fragile and preferentially susceptible to microdeletions [14]. We have found 19 new deletion subtypes that have not been reported in the COSMIC database. These results also support the idea that EGFR exon 19 is very fragile. Thus, it is very difficult to detect all exon 19 mutations in the clinical practice.

In addition to EGFR exon 19 deletions, the presence of EGFR exon 19 insertion subtypes that have shown sensitivity to EGFR-TKIs has also been reported [17–19]. In the present study, we found 4 patients with exon 19 insertions; these patients were all women, nonsmokers, and had adenocarcinomas (Table 3). The sequence analysis showed an 18 nucleotide duplication sequence inserted at position c.2231–2235 in exon 19, adjacent to the deletion hot spot site. The hot spot duplication sequence was PVAI. Two out of the 4 patients were treated with TKIs. P1 received erlotinib as first-line therapy and showed a partial response; her time to progression (TTP) of disease was 15.5 months. P2 received gefitinib as first-line therapy and had stable disease, and her TTP was 24 months. Although EGFR exon 19 insertions have rarely been documented, the frequency was 0.35% in a Hong Kong cohort and about 0.26% in non-Asian patients [17, 18]. Previous studies have showed a striking correlation between TKI sensitivity and EGFR insertion mutations both in vitro and in clinical studies [17–19].

Overall, EGFR exon 19 alterations are very complex, including different deletion subtypes and insertions. Patients with these alterations could benefit from EGFR-TKIs. It is important to identify a robust method that can identify all of the exon 19 alterations. In China, ARMS is routinely used to detect EGFR mutation. With the limitations of that method, only a few exon 19 deletion subtypes can be identified. PNA clamping is one approach to detect EGFR mutations with high sensitivity and time savings [12, 14, 20, 21]. A PNA, or peptide nucleic acid, is an artificially synthesized DNA analog that binds strongly to its complementary DNA sequence. While the specifically designed PNA probe inhibits PCR amplification in wild-type sequences, it allows greater amplification of mutant type sequences. The advantage of PNA-PCR compared to ARMS is that it can detect a larger number of subtypes of EGFR exon 19 deletions. Furthermore, the cost of PAN-PCR is affordable. Because the deleted base pairs of exon 19 encompass a wide range of positions within different subtypes, the choice of sequence for a PNA probe is important to provide coverage of more exon 19 deletion subtypes. The present study showed that the deleted base pairs of all of the subtypes encompassed a position from 2235 to 2281. We chose the “AGAGAAGCAACATCT” sequence for the PNA probe because it could cover all of the known subtypes of exon 19 deletions. In this study, we found that one of the 93 exon 19 deletions, which is a non-LRE subtype, could not be detected using PNA-PCR. Further analysis showed that the reverse PCR primer was located on the deletion site. Another PCR set should be designed to detect non-LRE deletion subtypes. Combining the PNA clamping approach with a ddPCR system could improve the detection sensitivity to 0.08%.

Recently, next generation sequencing (NGS) was introduced into clinical analysis for detecting oncogenic mutations including EGFR mutations. Previous studies have shown that NGS is a potent method that can identify unknown mutations with high sensitivity. However, NGS consists of a number of steps, including template preparation, sequencing and imaging, and data analysis. It is a labor-intensive and time-consuming method requiring specialized and costly facilities, restricting its use in routine practice [14, 22, 23].

There are several limitations to the present study. First, this is a retrospective study with a small sample size, and therefore there may be bias in the assessment of PFS. Second, the TKI treatment cohort is relatively small. As a result, only four patients with non-LRE exon 19 deletion types were treated with TKIs.

In conclusion, EGFR exon 19 is highly fragile, resulting in many different deletion and insertion subtypes. There were no significant differences in clinical outcomes after TKI treatment across the different subtypes. It is necessary to attempt to identify all patients with exon 19 deletions so that they can be offered TKI treatment.

A cohort of 2664 consecutive patients with NSCLC was enrolled in this retrospective study. EGFR mutations in exons 18–21 were detected clinically by Sanger sequencing between 2010 to 2014 and by fragment analysis and the SNaPshot method in 2015 at Gungdong Lung Cancer Institute (GLCI). A total of 93 specimens with EGFR exon 19 deletions identified by fragment analysis in 2015 underwent further analysis of exon 19 by PNA clamping and Sanger sequencing.

TKI treatment was administered to a total of 158 patients with advanced lung adenocarcinoma with EGFR exon 19 deletion mutations which were identified with Sanger sequencing. Patients were excluded from further analysis if they received TKIs as neoadjuvant therapy or had lung squamous cell carcinoma. Survival was compared among different subtypes of exon 19 EGFR mutations in these 158 patients. Patients’ clinical data were extracted from electronic medical records at GLCI. Chest computed tomography was performed every 8–12 weeks as a routine clinical procedure to confirm patient response and evaluate disease progression. Tumor response was assessed according to Response Evaluation Criteria in Solid Tumors (RECIST) guidelines, version 1.1. The study was approved by the ethics committee of Guangdong General Hospital (GDREC2013185h(R2)). Informed consent was obtained from each patient.

Deletional mutations in exon 19 of EGFR were detected using fragment analysis as described previously [24]. Briefly, PCR was performed using a FAM-labeled primer, and the resultant amplicon was separated using capillary electrophoresis and then analyzed in an ABI 3730 Genetic Analyzer (Applied Biosystems) according to the manufacturer’s protocol.

Detection of EGFR exon 19 deletions by ddPCR with PNA clamping

A total of 93 EGFR exon 19 deletions identified by fragment analysis in routine practice in 2015 were subjected to PNA clamping with droplet digital PCR (ddPCR) and Sanger sequencing to confirm exon 19 deletion. PNA clamping with ddPCR was carried out using a Bio-Rad QX200 droplet system (Bio-Rad Laboratories, Hercules, CA, USA) according to the manufacturer’s protocol. The primers and probes were identical to those previously reported [25], but a modified EX19_PNA probe was used. The sequence of the EX19_PNA probe was: 5’-AGAGAAGCAACATCT-3’, which targets the common exon 19 deletion region and could cover more subtypes of exon 19 deletions than the primer previously used, according to our clinical data.

Overall survival (OS) and PFS were compared among different patient groups using the Kaplan-Meier method with log-rank tests. Multivariate analyses for OS and PFS were conducted using the Cox proportional hazards model. Associations between mutations and clinical and biological characteristics were analyzed by the χ2 or Fisher’s exact test. All data were analyzed using the Statistical Package for the Social Sciences Version 17.0 Software (SPSS Inc., Chicago, IL, USA). The two-sided significance level was set at P < 0.05.

We thank the participants and the staff of GLCI for their contributions to this research.

This work was presented as a poster in part at the 19th Annual Meeting of Chinese Society of Clinical Oncology (2016, CSCO); Sept. 21–24, Xiamen, China.