Objectives: The purpose of this study was to explore the effect of systematic lower-limb rehabilitation training in elderly patients undergoing lumbar fusion surgery due to serious degenerative intervertebral disc diseases.

Nowadays, lumbar fusion surgery is popular in treating degenerative disc diseases, especially for lumbar spinal diseases [1–3]. Despite surgical advances, adults undergoing lumbar spine surgery have poorer physical and mental health outcomes compared to the general population [4–6]. More specifically, up to 40% report persistent pain, functional disability and poor quality of life and 20% to 24% undergo a reoperation [7–9]. Surgeons routinely recommend physical therapy to speed up rehabilitation after spine surgery. Postoperative rehabilitation has been reported to improve outcome after disc surgery [10]. However, some studies [1, 2, 11] reported that postoperative rehabilitation had no significant influence in pain and self-rated disability as compared to no treatment/self-management after lumbar surgery including lumbar disc herniation and spinal stenosis patients. Several randomized trials have found no significant difference between standard physical rehabilitation and either no treatment or an educational booklet [1, 2, 12].

As the population ages, the events of degenerative disc diseases in elderly patients seem to increase. Thus, knowledge of the results of treatment in this age group is important to the orthopaedic surgeons. As we know, lumbar spinal fusion surgery is an effective method of treatment for such patients. However, elderly patients suffering from degenerative disc diseases are different from those younger patients with the same diseases. Elderly patients may experience longer on-bed time in a hospital after being performed a fusion operation, as compared to younger patients. In addition, it is another long term for the elderly patients to recover from an operation trauma, due to the aged body and weak physical function. Therefore, during that period, postoperative complications, such as deep venous thrombosis (DVT) and lower-limb muscle atrophy, are more likely to occur and increase. However, few studies have reported whether systematic lower-limb rehabilitation training in elderly patients is effective on this problem existing in the process of body recovery after lumbar fusion surgery.

As shown in Table 4, there was no significant difference on any time points after surgery when comparing intervention group with control group regarding VAS score (all p > 0.05).

Currently, it is controversial on the effect of postoperative rehabilitation after surgery. A prospective study [1] of postoperative rehabilitation with lumbar spinal stenosis patients only found that routinely performed active physiotherapy with strengthening and stretching home exercises did not improve functional outcome (ODI) as compared with standard treatment. Neither rehabilitation program nor education booklet for the postoperative management had a significant impact on long-term outcome [12]. Recently, a randomized controlled trial [11] with 12-month follow-up indicated that quality of life and disability cannot be improved by active postoperative rehabilitation after spinal fusion surgery in patients with spondylolisthesis. However, the results from some other studies are to the contrary. Ostelo et al. [10] found that exercise programs starting 4 to 6 weeks postsurgery seemed to lead to a faster decrease in pain and disability than no treatment. High intensity exercise programs seemed to lead to a faster decrease in pain and disability than low intensity programs. But there were no significant differences between supervised and home exercises for pain relief, disability, or global perceived effect. Canbulat et al. [13] reported that VAS and ODI were both improved by a rehabilitation protocol for patients with lumbar degenerative disc diseases treated with lumbar total disk replacement. A randomized clinical trial [14] also found that the integrated programme of prehabilitation and early rehabilitation improved the outcome and shortened the hospital stay without more complications, pain or dissatisfaction.

It is true that elderly patients suffering from lumbar disc diseases are very different from those younger patients with the same diseases. Elderly patients are believed to experience longer hospital time after undergoing a fusion operation compared to younger patients. In addition, it is another long term for the elderly patients to recover from an operation trauma, due to the aged body and their own weak physical function. Therefore, during that period, postoperative complications, such as DVT and lower-limb muscle atrophy, are more likely to occur and increase. However, few studies have reported whether systematic lower-limb rehabilitation training in elderly patients is effective on this problem existing in the process of body recovery after lumbar fusion surgery. In our study, systematic lower-limb rehabilitation training (gymnastics) showed good effect on the rehabilitation after lumbar fusion surgery in the elderly patients, especially in the early stage postoperatively.

In clinical situations, we often asked and guided the patients to do exercise after an operation according to the procedures of lower-limb rehabilitation gymnastics. But we did not assess the effect then. Herein, this study has been designed and performed to evaluate the effect of lower-limb rehabilitation gymnastics on the functional recovery and complications developed during the process of functional recovery. As a consequence, in the early stage after surgery (during the first one or two weeks), lower-limb muscle strength, and patient satisfaction rate are better in intervention group when compared to control group. Besides, lower-limb DVT and ODI score are less in intervention group as compared to control group. However, there is no significant difference between the two groups regarding the above items evaluated in the later stage (on the timepoint of the 1st and the 3rd month). Regarding the VAS score reported in the current study, it has been found that lower-limb rehabilitation training/gymnastics does not increase back/leg pain, but relieves postoperative pain to a certain degree.

Surely, this study has indicated very important clinical significance. However, this work also has some limitations. Firstly, as a retrospective single-center case-control study, it lacks extensive representativeness. Secondly, we have not applied blind methods throughout the study. Thirdly, the sample size of patients included in the study is not large enough. So future research should strive to overcome these shortcomings, provide more reliable clinical research data. It is best to be a large sample, prospective, multicenter, randomized, controlled study, with blind methods applied.

This study has been approved by Ethics Committee of the Third Hospital of Hebei Medical University. The approval number is K2017-05-02.

We retrospectively collected medical records of elderly patients (aged ≥ 60 yrs) undergoing lumbar fusion surgery between 01/2013 and 01/2015 in our spinal department. Figure 1 shows the postoperative X-ray image of lumbar fusion surgery. Some of the identified patients randomly underwent systematic training of lower-limb rehabilitation gymnastics (intervention group), the others not (control group). As Figure 2 showed, 612 cases were initially identified, and finally 540 patients were included and admitted to this study. Inclusion criteria of the present study were as follows. 1- All patients have undergone lumbar spinal fusion surgery. 2- Preoperative lower-limb muscle strength was grade III or grade IV (because our lower-limb gymnastics is not suitable for the patients under grade II and meaningless to those grade V). 3- No history of other operations were on the lower-limbs. 4-No neuromuscular disease were on the limbs. 5-No pathologicalmyelitis or neuropathy existed. 6-All the patients have been excluded from lower-limb DVT by preoperative ultrasonography. Patients who did not have regular follow-up visits or had systemic disorders were also excluded. 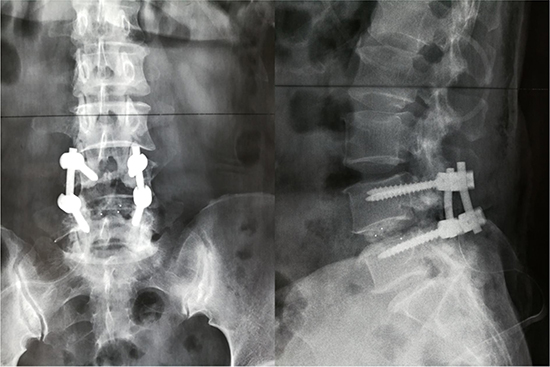 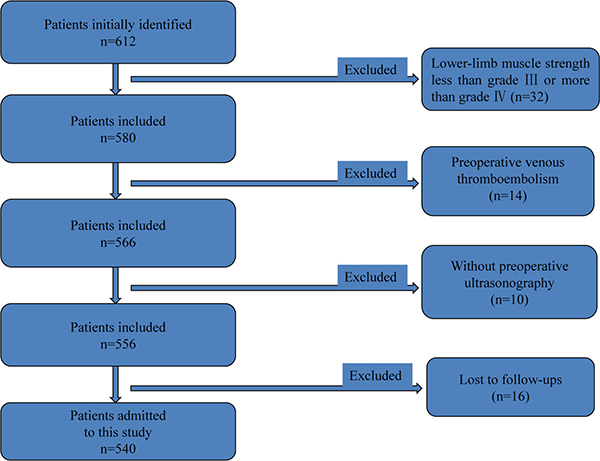 Statistical analyses were performed using SPSS for Windows, version 18.0 (SPSS Inc., USA). All measurement data are presented as the mean±SD (standard deviation) when data satisfied criteria for normality with p > 0.10. Otherwise, it should be presented as median (interquartile range, IQR). When data satisfied criteria for normality and homogeneity of variance, statistical analysis between groups was performed using Student’s t test. For count data, chi-square test was used for data analysis. Values for p < 0.05 were regarded as significant with two-tailed tests.

No conflicts of interest to report.